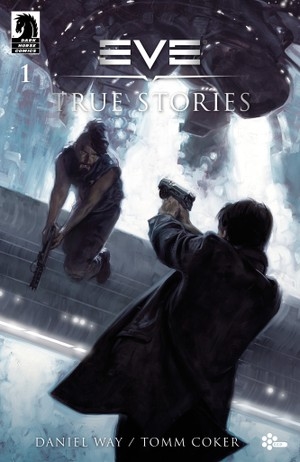 CCP Games, the world’s leading independent developer of massively multiplayer games and creators of EVE Online, along with Dark Horse, are pleased to announce that the first issue of EVE: True Stories, “Thieves Among Us,” is now available as a free download from Dark Horse Digital or via the Dark Horse Android and iOS apps.

Issue #1 of the EVE: True Stories graphic novel dramatizes the opening throes of one of the greatest gaming stories of the last decade – the fall of the player alliance known as the Band of Brothers. Filled with action and intrigue, “Thieves Among Us” is inspired by actual player-driven events. Issue #1 is written by legendary writer Daniel Way (Wolverine: Origins, Deadpool) and features the artwork of Tomm Coker (Daredevil Noir, Near Death) with cover art by David Palumbo (ALIENS, Heavy Metal).

EVE Creative Director Torfi Frans Olafsson has written a blog with additional information about the graphic novel release. It can be found here.