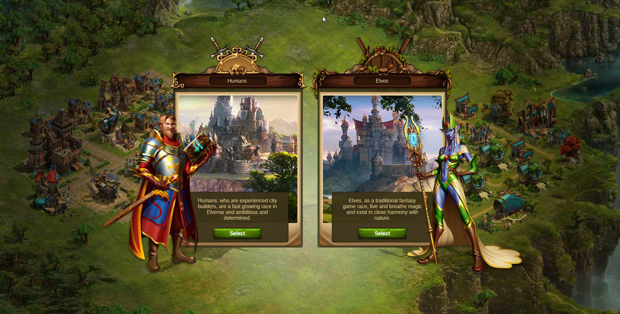 The beta of InnoGames’ Elvenar is an interesting proposition. Most browser-based free-to-play games offer Player vs. Player as their main draw, where people can spend money in microtransactions to get a brutal edge over their opponents. However, Elvenar has not yet announced any PVP. Like other InnoGames titles, it is also available on their own website rather than exclusively existing on Facebook. The goal is to build a city in your image using Elven or Human technology. The more time you invest in the game, the bigger you can make your city. The first few quests will get you acquainted on what to do and how to get ahold of resources and scout new parts of the map, but after that, quests become repetitious and little more than resource farms. 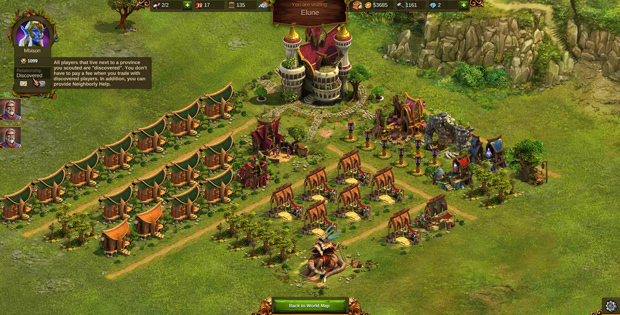 I started playing the game with some fear of it being just the same old city builder browser game, and in some aspects it is You have X amount of buildings with Y cost. Since buildings and resources are on a timer, there is a lot of downtime waiting for progress. You cannot kill other players, but you can assist them in little ways once a day. Elvenar is all about building a home for your people, fighting monsters and acquiring relics. The Research Tree is also a nice touch, coupled with an Auction Hall for in-game resources where you trade one for another. Elvenar is a browser game for people who do not want pressure, who simply want to enjoy a little fantasy in their day for a bit at a time, and even the player who spends hours at a time at their browser can plan and plot, raise an army and push into this new world to explore away. 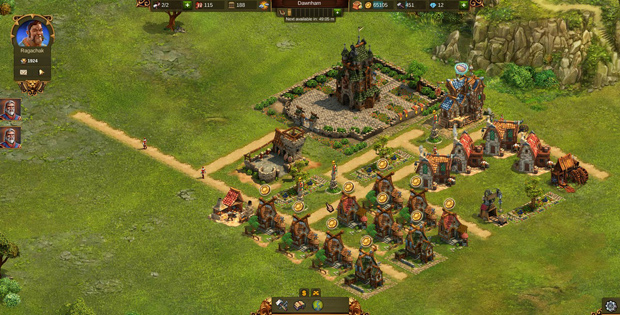 There are a near infinite series of ways you can build your city, but don’t be like me and slipshod it together at the start. At least you can juggle and move buildings with a button on the HUD, where you can put a building in another location. As you acquire expansions for your city through the Research Tree, or by destroying enemy minions, you will find that with the added space you can fit things in different spots. That’s such a Godsend, as I tend to think about the right now when putting a city together. Good thing I’m not an Architect! Buildings require differing amount of space depending on what they are, so it is advisable to put a little thought in. Though I do not have all of the buildings yet as of this writing, one of them appears to only be allowed to be purchased with Gems (the currency purchased with real money). Other than that, everything is bought with regular currency, and unlocked with Research. The acquisition of these expansions is pretty slow without spending money. The “Premium” city expansion tile is an example of this, and more can be unlocked as you improve your Main Hall. There are not a humongous pile of buildings yet, but there are several varied ones to choose from. Barracks for example, allow you to train and hire troops. Other options include changing the roads from dirt paths to streets, factories to create steel, wooden planks, and other resources. There is more to the game than simply crafting a city; exploring the world around you is also key. Between player cities, there are areas that contain multiple encounters. Each of these encounters make up the Province, and the more provinces you complete, the more territory you wind up having. 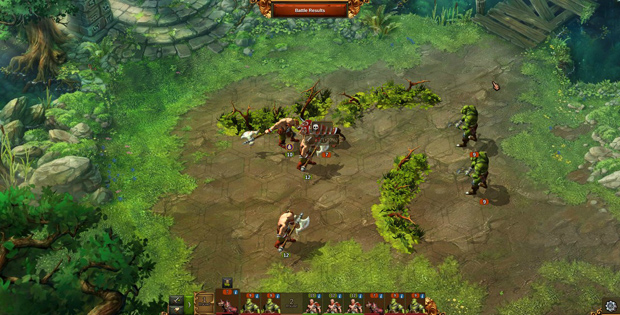 Combat is not the only answer though. One of the fun things about Elvenar is you can negotiate and basically bribe the enemies into leaving, giving you a Point of Knowledge and a Relic with each one if you do not have an army or simply do not feel like fighting. Both options give a Relic and a Point of Knowledge, so either option is fine. 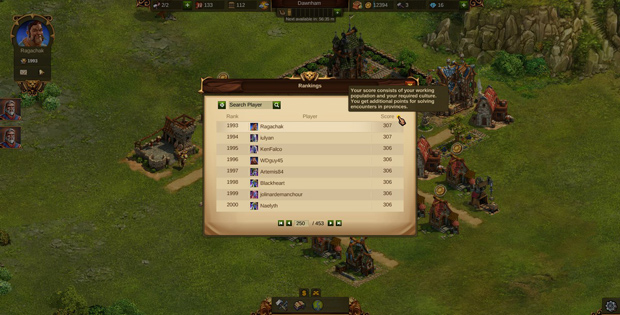 It’s All Fun and Games…

There are tons of things to unlock in Elvenar, so there is definitely plenty to do. The Humans feel more like medieval combatants, with crossbowmen, warriors, and the like. Elves’ look and feel quite like quite the opposite, carrying more of what you’d expect in a fantasy setting, especially with their powerful magic. I have not had the opportunity to play the Elves though, since I only had one beta key, but cannot imagine the gameplay is very different. I do like that while it is not heavily Player vs. Player, there is still a measure of competition in the ladder, where your standing is determined by how far you have developed your city. So while it features an aura of friendly competition, the typical PvP griefing crowd likely won’t be interested in the gameplay. You cannot even steal a camp from each other on the map, since you only see provinces for you and nobody else. 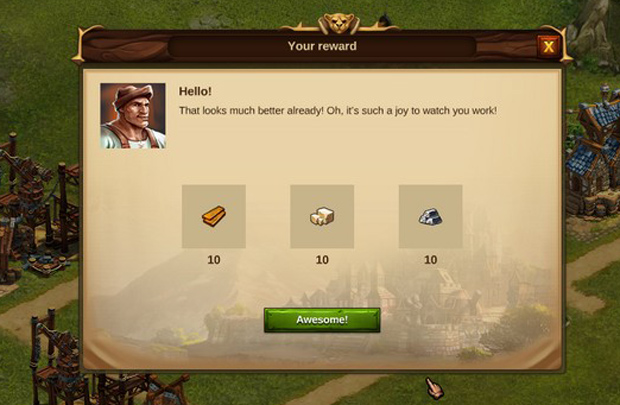 This is not a game you’re going to spend all day playing; instead, this is something you will probably leave open and play around with for a little bit. I have admittedly found myself spending chunks of my day plotting ways to rebuild and rearrange my city. My biggest qualm with the game is the quest system. It is basically the same quests over and over, and while they do give large amounts of resources such as Marble, Steel, Wood Planks, Crystal, Scrolls, and other magical items, they feel kind of boring after a while. Though pushing out into the world will make your city gigantic after a decent time playing the game. It is an interesting exercise in creativity. It’s relaxing, and I definitely like that; I don’t have to spend all day playing this game to see results. I can set a few things to work, and go off and do something else; come back later and voila! Results! 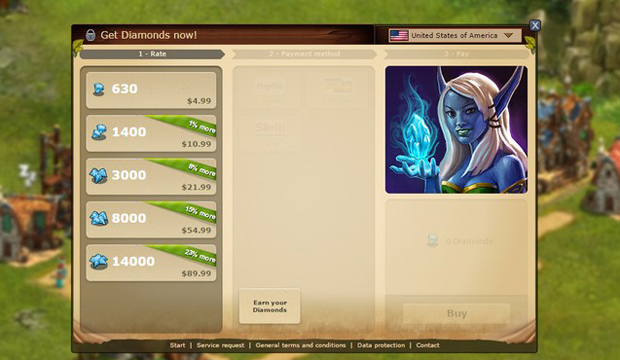 While this is not a genre defining title, it is definitely fun. It’s distracting in a way; when you really just want to relax and let your creativity out without loading something like Minecraft or SimCity. The strain on your PC is minimal, meaning you won’t have to bog your whole PC down while keeping your city running in the background. I genuinely enjoy playing it, and wonder where they’re going to go from this portion of the beta. It’s simplistic and that in no way detracts from how the game feels. In its own special way it stands out, in that it’s not begging for money or devoted to pure PVP. It’s just city building at its purest. And that’s okay. Yes, there are microtransactions and they will make the game faster, such as spending gems to regenerate dead units or build things faster, but the game did give me some to start with, which I sparingly used to speed up certain events. Not necessary, but definitely helpful.

The games graphics are about what I expect from a browser game. Not flashy and showy, but they do what they should, and that’s draw attention to the world and to your city. There are not many different styles of buildings, with only two factions. I do wish the battlefields would vary more as well, but some players will never even see them, without a necessity to do battle. And since it’s not a requirement, some players will just find a way around it and negotiate all battles. Though this is markedly similar to another game in the Innogames line, Forge of Empires. There are differences, such as two faction choices, and Forge of Empires has Time Periods, and requirements to reach these so it plays more like Civilization-lite.

Controls do exactly what I want. I left click on something, and it opens up. Sometimes there’s a bit of lag, but that’s likely attributed to it being in the beta phase. Every so often I’ll click on a building and it will hit the one next to it, so it wants a little precision, and that’s not bad. But it plays well for what it is.

While the game is simple and fun, I can’t help but wonder if there’s something missing. I like it how it is, but that doesn’t mean that there can’t be more. Better interaction with other players (as of now, you can only click on their city and assist them in some minor way.) There will be additions and updates, but for now, it is very bare bones.

The music fits the game fine, and the sound effects are pretty great, but they grew to become annoying after a while. I’d like a little variation in the soundtrack; that would be terrific. But at least it allows for volume control! It is in no way bad, but it can become intensely monotonous.