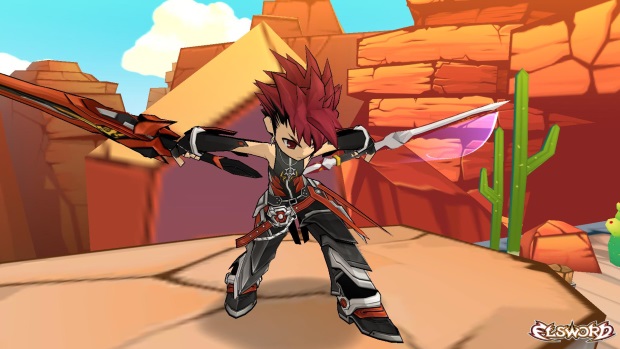 Kill3rCombo, publisher of the hit free-to-play action MMORPG Elsword, today announced the launch of Infinity Sword, the first new class in its huge summer update, “Elsword Transformation Evolution.” The update is a follow-up to this past winter’s successful Elsword Transformation series and is the next “Evolution” for Elsword’s six characters, introducing a new class for each. The Infinity Sword class, an enhanced version of the Sheath Knight class, retains the ability to dual wield swords and gains all-new capabilities and an exciting new look. This incredibly fast melee class will also have a big impact on Elsword’s PvP mode and is destined to have players developing fresh multiplayer strategies to deal with this new challenger.

While the Sheath Knight class is skilled with dual-wielding swordplay, an Infinity Sword is a true master, gaining even more swift dual-wielding skills with enhanced power and range. With these heightened powers, players will have the ability to summon an infinite number of mystical swords which hover in formation and attack foes relentlessly. Hence, Infinity Sword earned its “Infinity” name due to this amazing ability to summon an endless number of swords.

As a Sheath Knight, Elsword saw his summoned sword was absorbing dark energy. In order to fully use the sword’s dark power, he would need to allow himself to absorb dark energy as well. In doing so, he risked giving way to his dark inner side if he could not control the dark energy. In true Elsword form, he found the strength to take command of his dark self and his enhanced dark blade, becoming the ultimate swordsman, Infinity Sword.