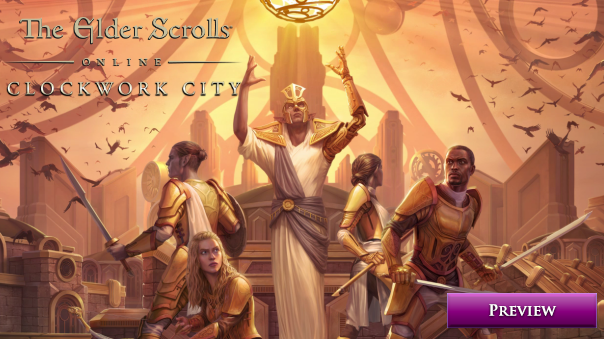 This past week I had the pleasure of wandering through the Clockwork City of Elder Scrolls Online with Rich Lambert (Creative Director) and Greg Roth (Content Director) from Zenimax, so I really got the VIP treatment! This area is the one I’ve been looking forward to the most out of the Morrowind DLC: I’m a sucker for clockwork/machine creatures, and this giant zone really ticks all of my boxes. It’s a fascinating zone because Sotha Sil, he who created the underground city, was attempting to “reshape the future”. Sotha Sil created this city of metal and gears underground within a sphere that appears to have its own skyline. No living thing grows in the Clockwork City. Even the trees and rocky outcroppings will appear to be living matter until you get up close and see the copper veins like wires, or the slightly unnatural shape to the outcroppings. It’s a truly fascinating concept, and how they brought it to life (so to speak) has been marvelous to see. We skipped a fair amount of running around and seeing things, to avoid spoilers (which I appreciate; if I don’t know it, I can’t spoil it!), and started at the Brass Fortress.

Visually, it’s magnificent. It’s not all just gears and metal, but it’s a legit attempt to create a world from non-living matter, so I’m glad it’s not just robot stuff throughout. Though there are fascinating things to discover, like how would Sotha Sil or his robots use a bookshelf? It looks like a standing conveyor, rolling these tablets through for you to peruse, and it’s just fantastic. It’s watching someone who has no real understanding of life try and create it, and the whole thing is a treat. There are so many little touches and design choices that made me want to keep wandering around well after our tour was done. The primary entities that “live” here are the Fabricants, which are part living and part machine. The city is guarded by Factotums, which are purely mechanical entities. The Brass Fortress is the only safe haven in the Clockwork City; everything else has a whole host of dangers, from the two world bosses to swarms of enemies and so much more. But they have nothing living here, not paper, not food. The only food they subside off of is this … it’s like gruel or oatmeal. I did hear there’s a quest to solve this food problem because man cannot live on gruel alone. At least, I can’t, so this is a quest near and dear to my heart. 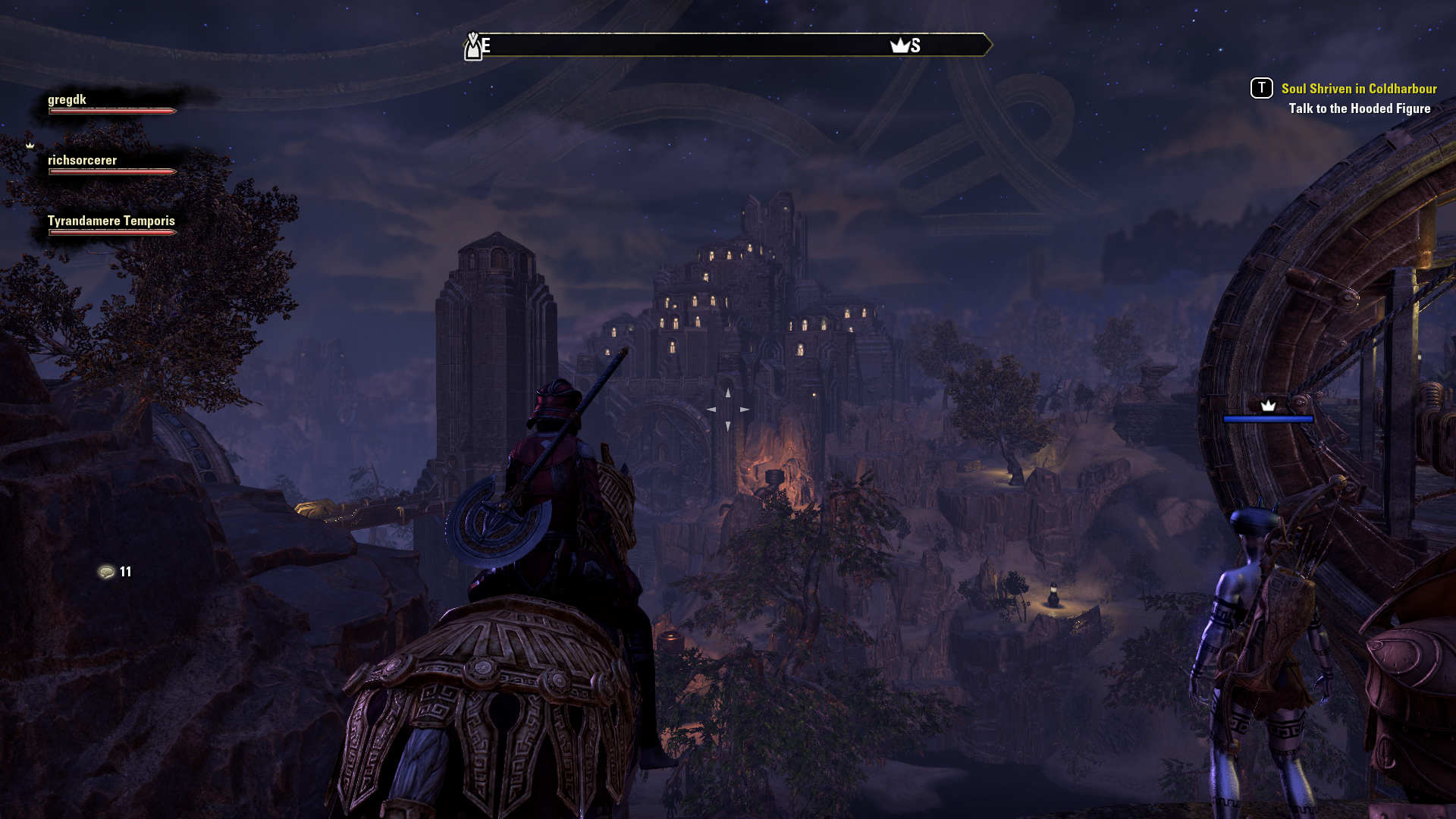 This is truly a majestic view of an artificial landscape.

I like that this world doesn’t have to adhere to natural laws. It’s how Sotha Sil interprets the world. I also like that it adheres to the current way of doing things in ESO (you don’t have to be level 70 to do this content; you can purchase the DLC and just jump right in)! There are plenty of things to fight too! From Factotums, mechanical Dova-Flies, the Brasilisks, and while they’re always mechanical, some of them do also contain bits of flesh to them, part living part mechanical. A prime example of those is the Verminous Fabricant, which reminds me of a flesh/metal raptor; there’s also the Clockwork Kaguti (which are much bigger and much meaner). There is no shortage of interesting things to murder while exploring the exterior of the Clockwork City!

I also got a peek at the Asylum Sanctorum, which is a mini-trial. This one’s unique because it really has a “choose your own difficulty” feel to it. Think back to older WoW raids, like Ulduar, where you could adjust the difficulty based on what you do or do not kill. That’s what you do in the Asylum Sanctorum. There’s a main boss and a pair of mini-bosses. You can kill them in whichever order, but if you go directly to the main boss, the mini-bosses will spawn in, so then you have to deal with his mechanics, plus theirs. There are also the new Asylum Weapons, which come in Imperfect/Perfect varieties. These drop here at different difficulties, and definitely incentivize players for doing the trial. If you go in and do it at the hardest difficulty, you can unlock a polymorph to look like a Factotum. These Asylum weapons augment one of your abilities (ex: the Two Handed Axe boosted Reverse Slash) and make awesome weapons a bit more accessible to the audience at large. Without spoiling anything about the encounter (we did try it as a group of three), the main boss of this prison for Sotha Sil’s experiments is Saint Olms the Just, which is a gigantic mechanical dragon/gargoyle abomination. He does not mess around. I think we managed to get it to maybe 8%? 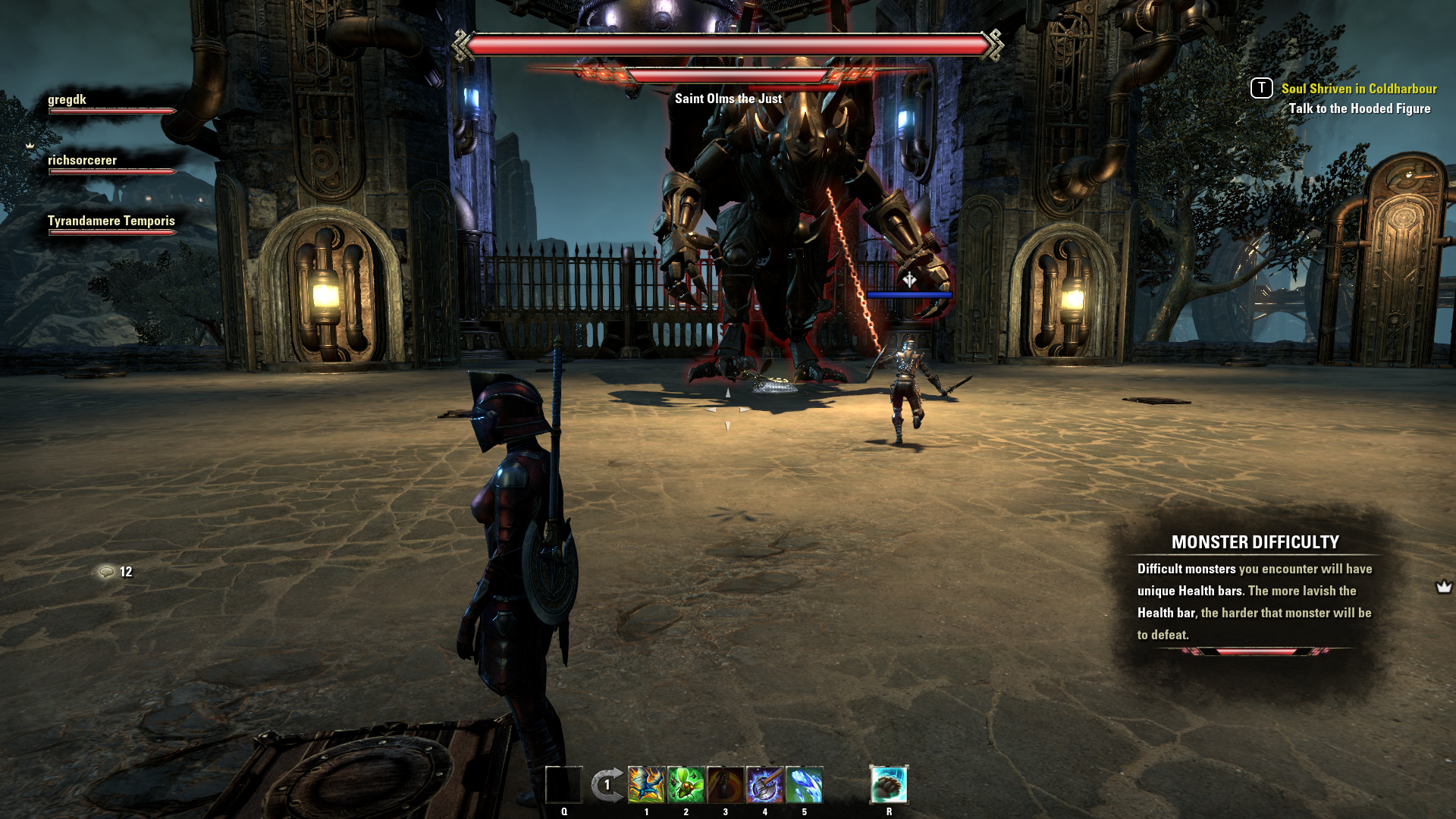 Saint Olms does NOT mess around.

Some new systems were also implemented in this update in the base game (no DLC required) and one of them is called “Transmutation/Item Retraiting”. It lets players change the traits of their weapons and armor, but it is tied to the crafting system. You have to have the trait to change it to what you’d like. Other players cannot do it for you (a’la enchanting in WoW). You have to research the trait if you’d like to add it to your weapons and armor. There’s a currency for it, Transmutation Stones, which are acquired by simply playing the game (Leaderboards, Daily Dungeons, Pledges, Rewards of the Worthy, et al) and so just playing the game you can get them and build the gear that you desire. It won’t change the itemization system, but it helps you have the stats/skills you’d like for your gear. That “perfect” gear.

The other major adjustments are to performance. They are changing how they handle animations in general (or rather, animation memory). They also optimized the scene graph (all the objects that get rendered/their order of rendering), which increases the overall framerate of lower-end machines from 15-20%, which could also help people stream the game for their audience. I also got to see the two World Bosses and I have to say, those fights are incredible. No spoiling them, but you’ll love them as a fan of Morrowind. Overall, Clockwork City is a gorgeous, interesting area with a truly unique feel. From the oil rivers, interesting lore and quests, and absolute loads of content to do (two new delves, a new story quest, and more)! Clockwork City is well worth the price of admission for both the casual fan and the hardcore Morrowind fan alike. I won’t lie to you, I love this zone, and cannot wait to just skip right to exploring the zone for myself.