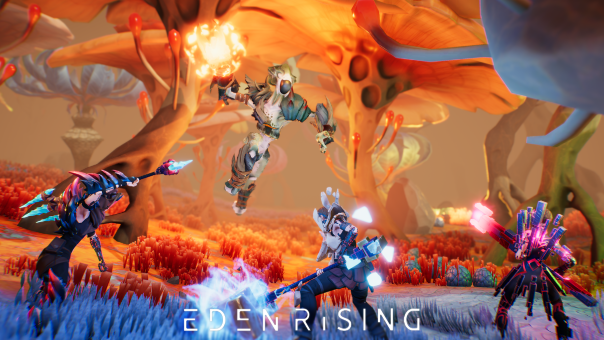 Eden Rising arrived today from Nvizzio Creations, as an open-world tower defense with over fifty thousand wishlists on Steam. It’s a blend of action tower defense and open world exploration. It also features two editions, including a free-to-play option. Eden Rising launched on Early Access last year, and since then has added quite a few new features. This includes resource cultivation, character customization, a revamped item upgrade system, and online co-op for up to 8 players.

This launch also adds the free-to-play Explorer Edition, which is a fully-featured gameplay experience with no microtransactions.  Players that owned the Early Access version of the game will now have access to the ‘Ascendant Edition,’ which is available to purchase for new players. This edition includes four additional areas, more sieges, armor dyes, extra bestiary mastery, and more. Regardless of which edition you own, you can still play with your friends. Explorer Edition owners can jump into games of Ascendant Edition users, and gain access to all of the content and missions that they have. Eden Rising is available today on Steam for Free, or for 24.99 for the Ascendant Edition.