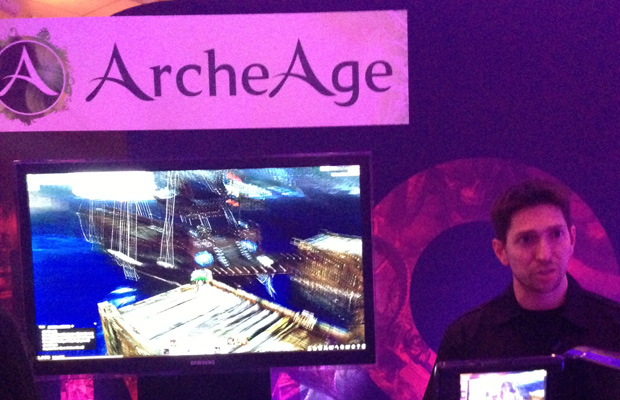 We had to clear nearly a mile distance in 10 minutes from our meeting with Kill3rCombo at the JW Marriott to Trion Worlds’ hidden third floor meeting room above south hall. But with sore feet and arching backs we arrived just in time for what can probably be described as the most impressive demonstration of the entire show. If you haven’t guessed it yet, I’m talking about ArcheAge!

We started things off by getting a good look at the character creation in which players are able to pick three class specializations out of a pretty good sized list of options including Warfare, Sorcery, Archery, Devotion, Necromancy, and Finesse. There’s plenty more involved so be sure to catch the visual in our filmed presentation soon! There’s also a series of races you can choose from with no race or gender locks, though you might want to be sure to choose the same race as your friends as it determines your starting continent. And no I’m not talking about your typical novice starting zone that conjoins with the others after 15 or so tutorial levels. Your characters will actually speak a unique language based on their starting zone and literally have to study and raise a skill to translate and communicate in any meaningful form to races of the other nations. Yea, weird and awesome!

Another thing that I wasn’t sure exactly when or how to describe but must mention is the pre-built cities are massive! I mean… massive! And sandbox fans don’t worry, there are only a couple around the world and they are purely in existence to push forward a background story via quests. Players have huge regions they can build their own towns and castles in to make each server feel unique. 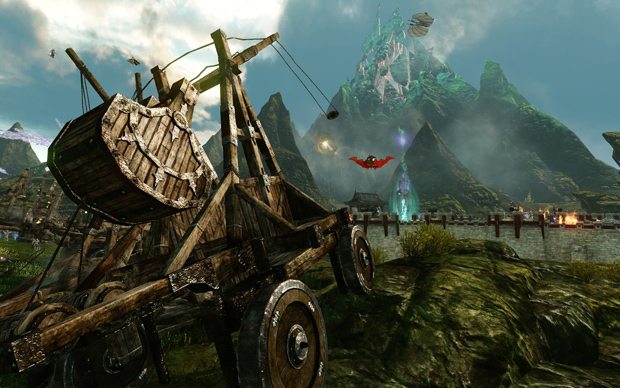 I can’t stop thinking about how cool the gliders were. And the boats. And gliding between boats to launch raids against other ships. And using skills on said gliders or said ships with unique interactions depending on your location. And the Kraken! *Head Explodes* 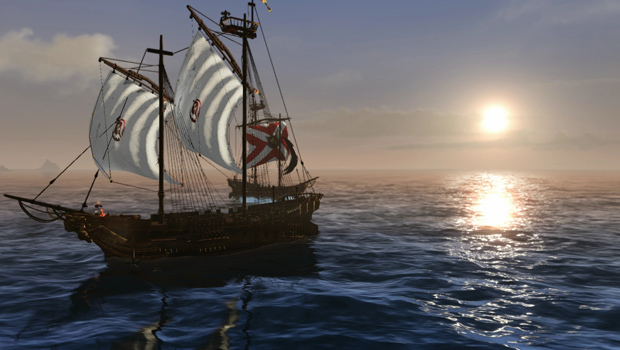 Ahem, I suppose I should calm down and explain the gameplay more clearly. Players can acquire gliders in this game as a form of flight, though not in the traditional free flying sense you usually see in MMORPGs. Gliders are impacted by gravity though if you can find air currents or acquire certain skills, you can increase your altitude and stay afloat a little while longer. Players can also use skills to rain hell down on enemies below them, go stealth mode for sneak attacks, and plenty of other skills that I’m sure I haven’t been privy to witnessing yet. 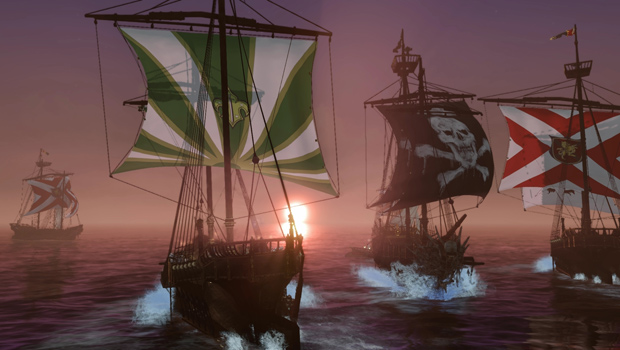 Ships on the other hand require a massive amount of material to create. At least if you want to create one capable of holding its own in combat against other players since you’ll receive a free sailboat pretty early in the game to help you get around places. While a player is set as the captain upon the completion of a boat (and able to stick it in a portal and carry it around in their pocket for convenience between trips), any sizable boat actually requires a crew to sale efficiently. Gunners need to man the guns, sailors will hoist the sails and help you catch the wind, the captain must steer the ship, and someone can even utilize a telescope in the crows’ nest to keep a look out for new lands, pirates, and even a giant squid if fortune doesn’t favor your journey. This works similarly to radar in a military title.

Speaking of pirates, ArcheAge offers ultra-freedom including the ability to attack anyone nearly anywhere in the world and make off with their crafting mats as phat loot. Of course the more you do devious acts against your fellow players, the more infamous you will become until eventually bounty hunters are going to come looking for you to bring you to justice. Nah not that weak sauce non-permadeath PKK kill justice. I’m talking about Phoenix Wright courtroom drama justice in which the players can form a tribunal to look over your case in real time and offer sentencing based on your guilt. Then you get sent to prison! And apparently if you continue to live the life of an outlaw long enough, you’ll eventually lose your citizenship to your home nation and be forced to live on the island of pirates with no interaction with NPCs. Pirates of course will have plenty of incentive given the hardship to stick together so the free peoples of ArcheAge better prepare for the coming pirate wars! 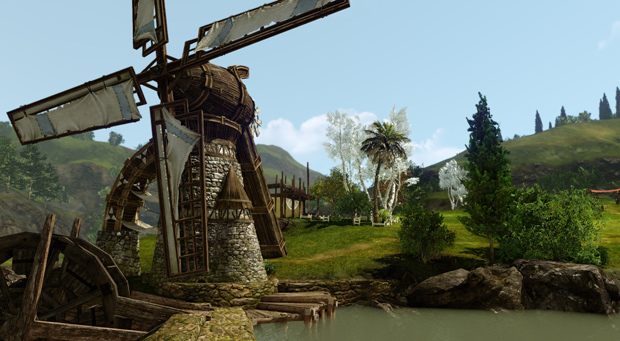 Another feature that truly sets ArcheAge apart is time progression and its interaction with crafting. As Trion’s representative so eloquently stated, “Farming is fun. No I’m serious!” You can plant, care for, and raise your own crops and trees to harvest material for crafting. Beyond this, you can also raise cattle and other livestock or event mountable animals from small babies into large and powerful beasts. Or you can ride around on a cow… that will swim in the ocean. Pets that can be leveled up individually and offer skill customization are also included and yes they will fight alongside you. Fall damage is included and your mount can soak it up for you should you be ready to sacrifice it for your own safety. 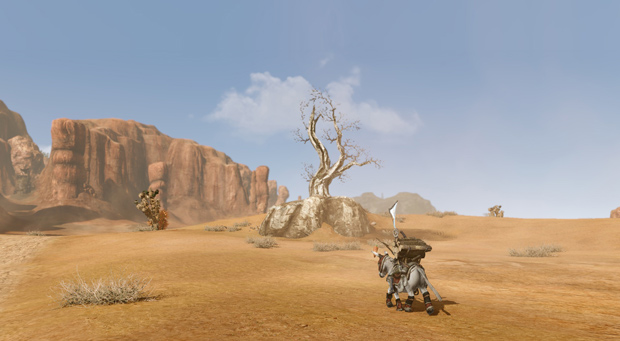 Mounts also play a particularly important role in ArcheAge’s economy due to the fact that materials are heavy and burdensome to carry effectively on your back. By getting a donkey or other mount that specializes in transporting cargo, you can greatly speed up the time it takes to get your materials from point A to B. For major projects like building castles, players can even create caravans. Probably for the best too, as you will want backup if pirates show up to steal your booty!

Although combat wasn’t included in the demo, it seems that combat is based on traditional click to target combat mechanics. Though they promise that this is the most tuned version of traditional MMO combat their future players have ever seen. The animations are incredibly smooth and there is virtually no clipping at any time, whether you’re strutting your stuff or climbing the ship’s pole to the crow’s nest as one of the silly Ferre cat races. Even when you go in for a landing on your glider, your character will stand on top of it and slide to a stop rather than just immediately clipping to your walking animation. The attention to detail in this game is just fierce. 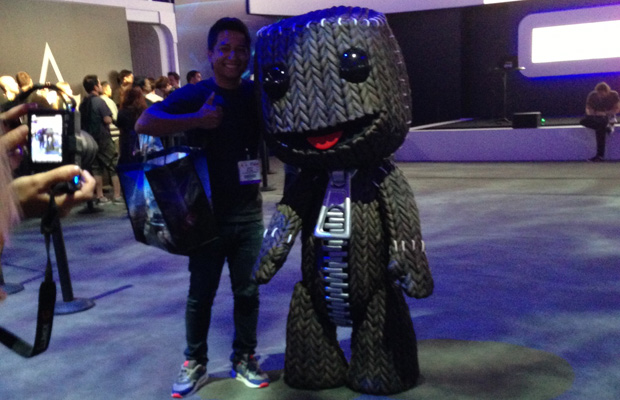 That sums up our Wednesday experience! I’m jumping straight to work on our Thursday coverage now including the epic Ifrit battle on Final Fantasy XIV so don’t miss out on our continued E3 coverage and upcoming video series. Subscribe to MMOHut’s Youtube to be the first to witness it all! Oh and our apologies on getting this up a little late but… 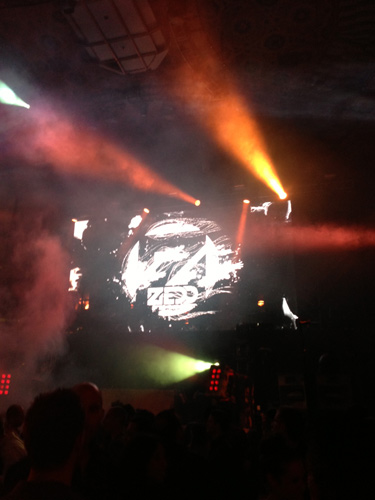 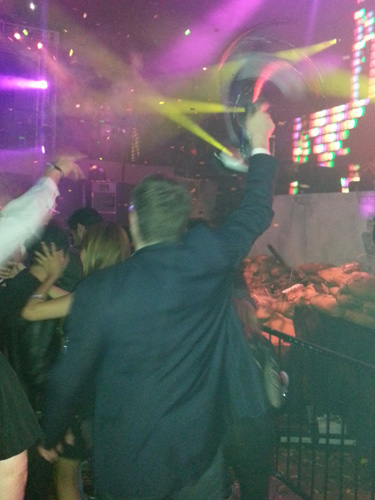 The Wargaming party Wednesday night was too awesome for its own good!