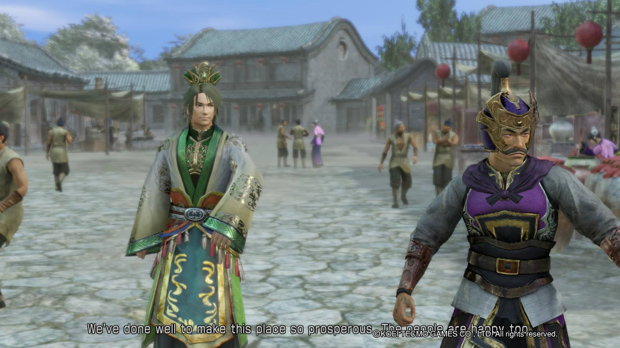 Thinking Wei Outside of the Box

I was thrilled to see another Empires title; I realize I’m probably in the minority there though! I actually did not start playing the Dynasty Warriors series (despite my love of the era, and the Romance of the Three Kingdoms series) until 4: XL. In some ways, I enjoy the Empires expansions even more, because it’s not all historically accurate. There are lots of ways to influence the flow and pace of the game, and change the course of Chinese History in your own way. Using the DW8 Engine is also an excellent choice. Every character has a unique weapon and style to their own, and there are a pile of customizable options (including Warhorses!). While I do wish there were more cutscenes that didn’t all feel the same, overall I’m pretty satisfied with what’s on offer. 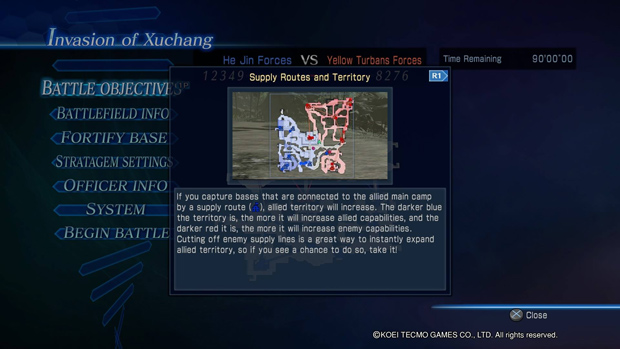 One Seal to Rule Them All

As always, the goal is to unite China under one banner. Whether you are a grunt in the system, or the Ruler, calling all of the shots is entirely up to your play style. In most of my playthroughs I started off as a free officer, wandering until I found the right ruler for me (or at least had the other characters I wanted to interact with) and applied to join them. As time went on, I performed well in battle and gained Merit. Merit is accumulated by accomplishing goals set out in battle, on the pre-battle screen as well as during the Planning Phase, which occurs twice a year. The goals are pretty standard: In the Planning Phase you will likely see “Join one invasion and win,” “Complete one quest,” or “Increase happiness in one province you control.” They are varied enough so that any style of character can at least do something, or several things, depending on how you play. In battle it’s a little different, but still the same. Defeat Target Warrior/Base, defeat X Warriors or Capture Y bases, and keep troop strength above a certain level. 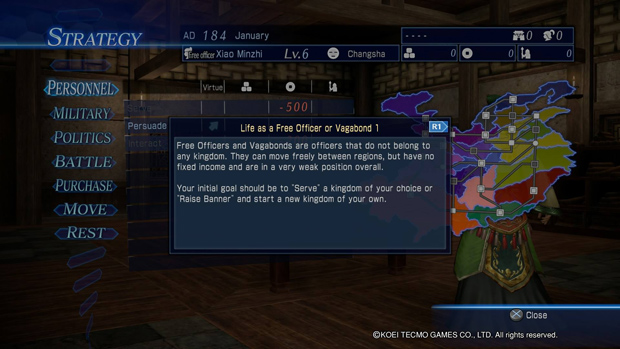 While these are all really pretty standard, you don’t have to be a virtuous and kind character. You can be villainous and evil, much in the way Dong Zhuo was. Sure, it’s easier to win the game as a good guy; traditionally Shu are painted as the virtuous, benevolent heroes, and even though it was Wei (or Jin if you prefer) that really got the unification victory, Shu were shown as heroes no matter what. If you choose the darker route, extorting the people and executing your foes that won’t join your cause, you will see far more uprisings and rebellions. But again it’s all about what makes it fun for you! It wouldn’t be fun if you didn’t at least have the option to be as human or inhuman as you choose to be. Depending on your rank in the kingdom you also get more options on each turn. If you are the Ruler, expect to be able to hold banquets and donate money across the kingdom. Conversely, you can also force conscription and tax constantly if you want to take the more evil route. What separates Empires from the rest of the series are the choices you can make. It’s all about choices; you don’t have to join invasions, you don’t have to take the people’s needs into account. 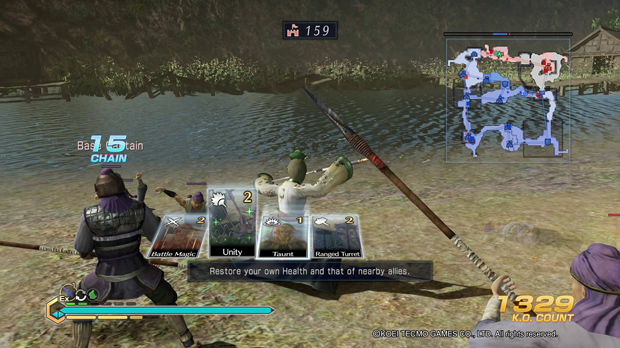 Where you are located matters as well. Certain items are only found in particular provinces. And in order to purchase these items as well as strategies, you may have to build particular structures in these provinces. Each province can have two structures, each with their own benefit. Academies let you purchase strategies (not the only way to unlock them!), Blacksmiths let you purchase new weapons, and Merchants will let you buy equippable items (various stat bonuses such as in earlier Dynasty Warriors games). Location is key: It influences who you can recruit and who you can associate with. And these choices also matter. Depending on who you spend your time with, you can wind up married or having Sworn Brothers! The marriage is new for several reasons; while an earlier title did include marriage, in this you can have a child that can also join your faction as time progresses. Your significant other occasionally can give you items or weapons as well. Your actions also give you titles that can affect your stats in minor ways, but are also a display of how your character lived. 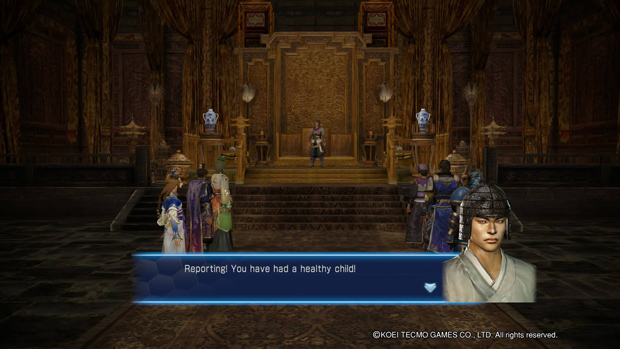 Here is where the replay value can come in. At the end of the game if you played as a created character, you can see them again in other replays, provided you are playing someone new. How you acted and the choices you made will influence their stats, and how they act and fight in the game. You can also register these characters online so that they might show up in other peoples’ games! Now that’s fantastic. I like the idea of Zhang Rong (one of my characters) showing up in a friend’s game potentially causing mischief. How you live your life will directly impact that character in a fascinating way. You can also choose to save your children as playable characters at the end of the game. Replay also comes in the form of Custom Scenarios. You can create a new scenario with any parameters you’d like, officers wherever you want, the strength of their kingdoms, et cetera. From what I’ve seen you can also upload these online for other players to struggle through (as you will no doubt not want them to be easy!), which can create an unlimited amount of replay value. 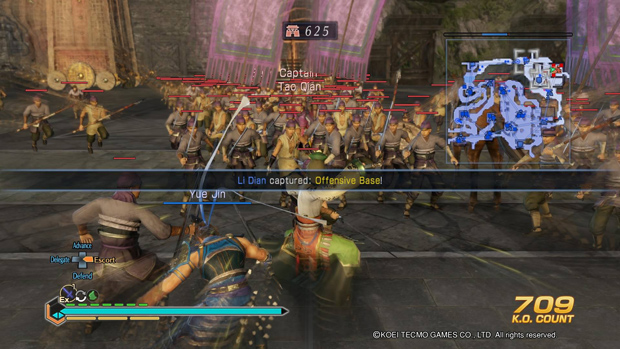 Don’t get me wrong, I’m thrilled that Koei is using more Online play options. Samurai Warriors 4 had crossplay, the Dynasty Warriors: Gundam series and even One Piece had some online play, even if it was minor. The basic online functions in 8: Empires are simplistic, but there’s room for growth. What would really make it stand out is a versus scenario; sure the logistics would probably be insane and it would probably feel like you’re playing Civilization versus other players online. Clearly any fan of the series would be in love with that function if it existed though. The current rendition may not be all the way outside of the box, but Tecmo-Koei is moving in the right direction. Creating custom scenarios is definitely a start, and the idea that you can upload yours onto the Internet for others to play should be a lot of fun. Fans of the era will make interesting What-If scenarios, and people that just like beat ‘em ups are going to make insane challenges just to see how others deal with them. 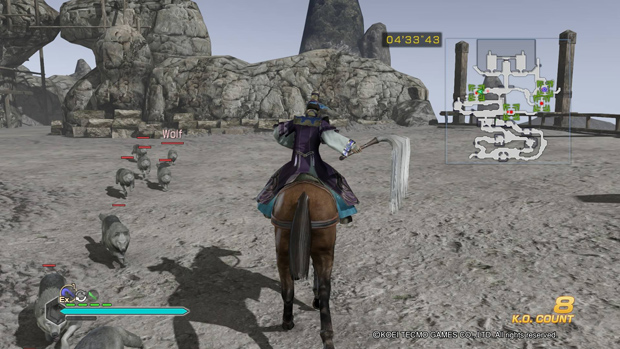 Not Quite a Golden Age

While I was definitely thrilled to see an Empires title on the Playstation 4 (and even on Steam), there is so much more that could have been done here. The cinematics list is very small; small enough that I witnessed nearly all of them in a single playthrough. I find myself skipping them, but doing events just to get the bonuses. Not all Sworn Brothers were found under the Cherry Orchards, but it is definitely a nice touch. I’d like to see more historic work and events that haven’t been covered in a Dynasty Warriors title yet, though 7 and 8 were a very large step in the right direction with the addition of Lu Bu’s story and the creation of the Jin faction. It can be very repetitive I’ll warrant, but there are enough ways to change gameplay to give more replay value to your title.

While I was delighted to see character creation, I was ultimately quite disappointed in the choices of costume. I feel like I’ve seen the same gear since DW5: Empires. Ogre Armor, Samurai Armor, Imperial Robes, et al. There’s no way to unlock more that I’ve seen, though perhaps there will be DLC. I’d love to see faction specific armor, or perhaps particular barbarian tribes (Nanman, Shanyue, Qiang, et cetera). Koei got their big push with their Historical Simulation Series, so they definitely have the tools to do stuff like this. I was mortified that almost all of the custom character stuff was either not period specific or just the same stuff as all the other games. Come on guys. You can spice it up a little! I understand that Dynasty Warriors is the same era every time, and the combat might feel a little boring after a while, but that’s why we have 82 or so different weapons now. Surely we can come up with a few more articles of clothing. 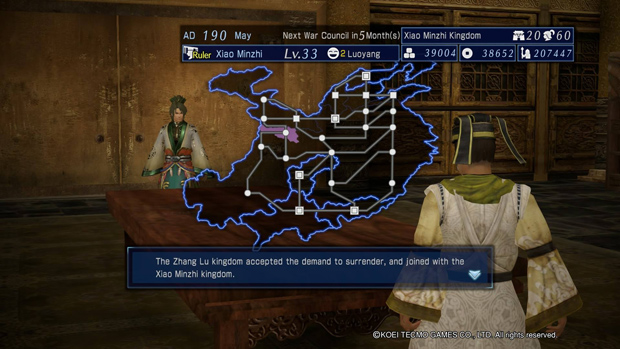 Remember, Do Not Pursue Lu Bu:

While the big argument is “Dynasty Warriors titles are repetitive and boring after 7 iterations,” they must be doing something right to keep going strong. The game is beautiful, and it’s a more in-depth Empires title than we’ve ever seen. One of my few, but huge gripes with Koei is that they don’t take enough chances, don’t stretch into new directions hard enough. There’s so much that can be done even if it’s just this one era that spans about 185-280 AD. I really want to see more out of the cutscenes and more functions in online play. Despite that, the game is fun for fans of the era, and definitely fun for fans of the beat ‘em up style of Dynasty Warriors that want a little something more in their game to mix things up. Plenty of items to unlock though sadly none of them are cosmetic that I have seen. If you’ve never experienced a Dynasty Warriors title before, this one should blow you away.

Dynasty Warriors 8: Empires is beautiful. Cutscenes are a little bland and dry, But the actual art assets with the game are spectacular. They really capture the environment in a bold and terrific fashion. It’s a little over the top in some aspects (such as Red Hare’s fiery mane) but it’s designed to capture the attention of the player, and I think they do a phenomenal job of that.

While the controls are pretty solid, I do think it’s a little awkward to have R2 be the strategy button and up arrow to be the button to activate them. The directional pad is only used in combat to sort through tactics, and give the occasional order. Other than that controls are great, though I do have a problem riding a horse after a while. Every time I hit left or right they look like they’re going to fall right over and that’s distracting.

Gameplay is great, just what I’d expect of an Empires title. But alas, it is still kind of stale. They made huge strides in adding lots to the War Council/Strategy phase, but that’s really all that got added, outside of the customization options (which are great outside of clothes). The Custom Scenarios are definitely a nice touch that I want to explore more.

The music in Dynasty Warriors has always gotten my blood pumping. The guitarist that does their work is terrific, and so many of the different music tracks are outstanding and different. I was rather hoping that I would get English voices again, or at least an option for Chinese. Watching Chinese heroes speak Japanese is just wrong somehow. All in all the game sounds terrific, the animal roaring and the bellow of the soldiers all just work right.

Want to see the game in action? I captured some gameplay during the preview, though audio was not recorded.

Looking to try the game out on PC without shelling out your cash? Sounds like a free to play edition is in the works and will be live shortly.