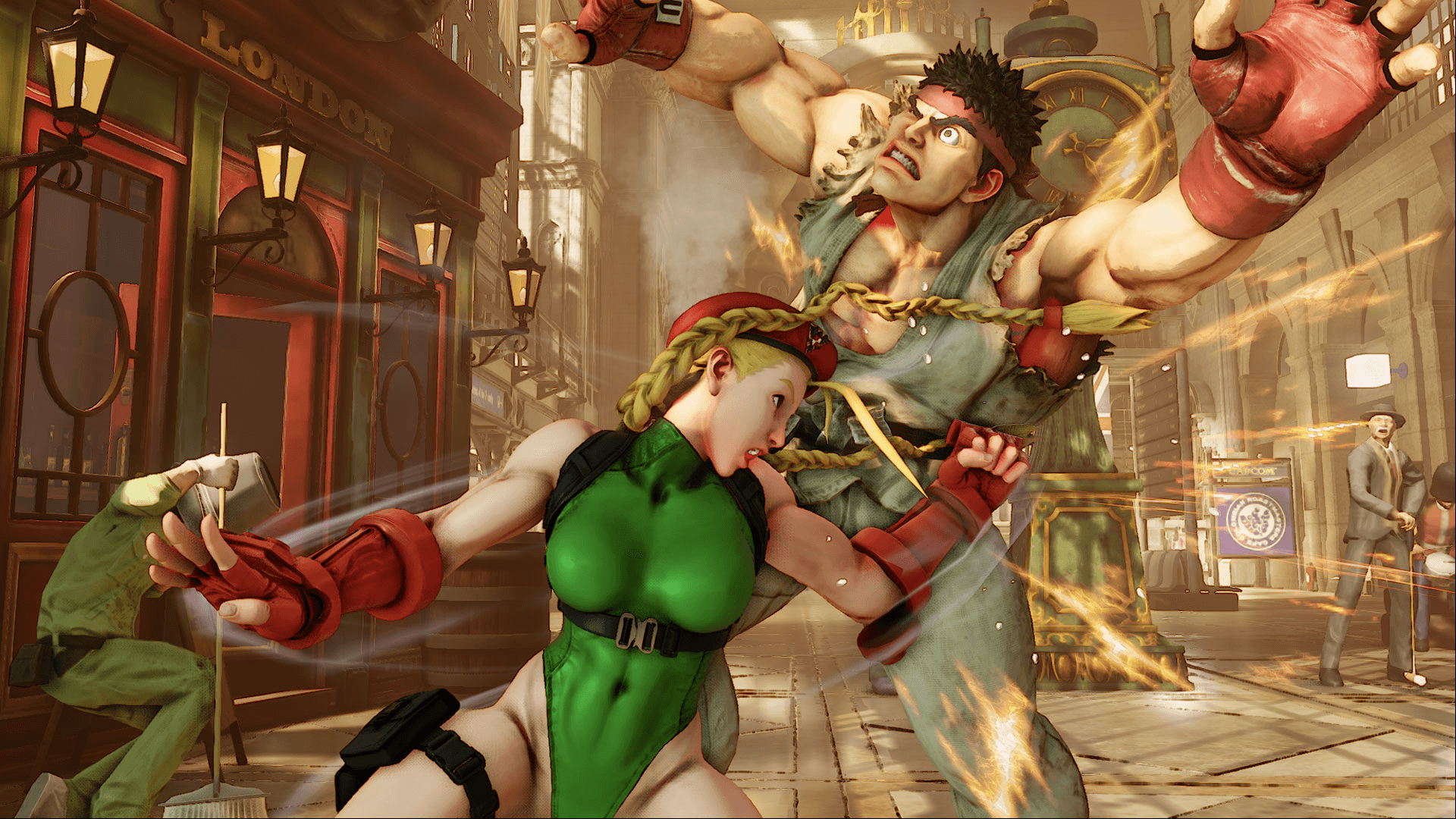 This has been a great month for fighting games! I can’t help but be hyped. GG, Melty Blood, and Blazblue are coming to Steam, and Street Fighter V! Its sibling Street Fighter IV went through several editions, many of which left players frustrated, disappointed, or downright angry. It became a game of turtling and defense, instead of what it was in most of the other renditions of the Street Fighter franchise: aggressive, fast-paced, in-your-face style gameplay. However, now that Peter “Combofiend” Rosas is directing the ship as associate producer, I’m more excited than I have been for a Street Fighter game since Alpha 3. The earlier beta phases left people with proverbial sand in their mouths. Connection issues were just the tip of the iceberg. Most people got to play it for a couple of minutes before it would disconnect them, and that’s if they got in at all! Then it got pushed back to an “Undetermined Period of Time.” Nonetheless, I kept my eyes open, since Maximillan, Gootecks, and a few other FGC personalities had some time with it. Sadly, I had to miss out on it due to other work assignments, but I’m here now! Combofiend gave a very detailed schedule of when it would be available, so I got plenty of time behind the sticks to give it a whirl!

What’s so important about Street Fighter V? It’s not a waiting game like its predecessor. It has amazing new mechanics as well as the EX gauge from Street Fighter III. There are quite a few things to love, but the biggest thing is exclusivity to PS4 and PC with crossplay between the two! Players on Steam can play against players on the Playstation 4 console which is a first as far as I’m aware for the Fighting Game Community. The success of this game will determine if other games jump on this bandwagon. The FGC has been pretty divided between Console, PC, and Arcade players, but now it is slowly coming together as one group, and frankly? That’s beautiful. New characters, old characters that I missed, beautiful stages and awesome mechanics are creating a fighting game I’ve wanted for a long time. I do have a few complaints, but overall the gameplay is considerably positive.

NO. PAID. DLC. Let me stress this. NO PAID DLC. Capcom has made some really stupid DLC decisions in the past, such as packing it all onto the Ultimate MVC3 disc and expecting people to pay to unlock it. But you can use Fight Money (shout out to Balrog/Boxer) to unlock stages, AND the characters that will get added. The first batch are Alex, Guile, Balrog, Ibuki, Juri, and Urien. Honestly, I’m disappointed Juri and Ibuki are coming back, but that’s only because I hate them. There will also be stages to unlock. At launch there will be 16 characters, and quite the all-star cast. Included in this are several new characters: Necalli the mysterious, soul-searching warrior; Laura of the Matsuda Dojo in Brazil [older, sexier sister of Sean]; F.A.N.G. who is the supposed Second in Command of Shadaloo; and Rashid who is obsessed with taking down Shadaloo and getting his kidnapped friend. You have the option to use real money to unlock these but there are two in-game currencies available to use instead.

Game mechanics create a more fast-paced game; for example, characters with traditionally charge motion movements [hold back or down, then hitting forward or up] have been changed to be quarter-circle or half-circle motions for the most part. A prime example is Vega’s moveset. There are still charge characters in the game, such as F.A.N.G. and Necalli, but a lot of the older ones got toned down to be easier/faster to use. Lots of charge characters creates a slower game, since SF charge times are a bit longer than an anime fighter. It’s easier to get EX gauge than it was to get Ultra gauge in 4 as well. It’s a shorter gauge which is used to create powerful EX attacks as well as “Critical Arts”, which are basically super arts like in other SF games. The V-Gauge is new also, and it adds three new, interesting techniques. V-Skills make the characters unique in a bunch of ways. Ryu gets his Street Fighter 3 parry back, R. Mika gets to cut a wrestling promo to increase throw damage, Ken gets Quick Step to move in suddenly and command kick/input another command towards the end. V-Reversals use a portion of the gauage to counter while being attacked, and V-Triggers burn your meter slowly to enhance your character. Chun Li gets additional attacks, Ryu’s fireballs become faster and more powerful! Birdie eats a huge pepper, and does extra damage and guard breaks on specials. Zangief’s Cyclone Lariat makes him spin, creating a vacuum. If the buttons are tapped quickly the person is drawn in faster and he spins faster. If they are held, he continues to make a multi-hit attack. I’m genuinely hoping that Vortexes are gone forever too. A Vortex is when you get a hard knock-down and move over the other character and hit them from behind, forcing them to block backwards or forwards, creating a loop of damage and knockdowns. Cross-ups are very much a thing (jumping over a person and hitting them from behind) but I don’t see much on Vortex gameplay. I’m also very appreciative of the Stun Gauge being visible. Now I have an idea of how close I am to a stun without crunching numbers.

Visually and mechanically speaking, this game is a freakin’ masterpiece. It looks beautiful, it sounds amazing. Gameplay is incredibly strong. What do I hate though? Where the hell does this take place in the storyline? I have no damn idea. Guile and Charlie [Nash] are in the game at the same time! They worked together to find M. Bision/Shadaloo, and in Street Fighter II it was pronounced that he was dead. He’s different now; angry, bearing a large grey, Frankenstein’s Monster-esque blotch/stitches. In the beta, you can only do Ranked/Casual/Training, which is fine. But if you want to play online, you have to select a “Favorite Character”, color, and stage in the main menu. Whoever you have selected is who you will play online. I hate this so damn much. Say I picked Ryu, but I’m practicing Cammy or Laura in Training Mode. Training Mode in the beta seeks out online opponents, in Ranked as well as Casual, but it does not appear to let you change those settings at all in the beta. If a match starts, you will stop playing Cammy and go to Ryu. I intensely dislike the way this is treated, it’s cumbersome and unnecessary. I’m not a fan of how ridiculously powerful Cammy appears to be, but there’s still time to balance and adjust characters. I’m not a pro by any means, but I know what is frustrating for me to deal with, and right now that’s Cammy.

At the start of the beta, only a handful of characters were in, but on the last day, they really rewarded testers: almost everyone is in it now! R. Mika, M. Bison, Charlie Nash, Dhalsim, Ken, Vega, Zangief, the works! There are still a few on hold, but Capcom’s clearly putting in work this time around. I really feel like they’re going to produce the game that the Fighting Game Community needs so desperately. Something exciting, action-packed, and intense! You can’t sleep on anyone in this roster. Grab your sticks, your controllers, whatever you play on and get ready! I’m excited to try characters I never did before because I was no good with their playstyle, to try all the interesting V-Techniques and to resurrect my love of Street Fighter. I was a little down on Ultra IV; it’s fun but it’s not what I think people need or want right now. In March 2016 we’ll see Street Fighter: Resurrection which will serve as a narrative prologue, set in Charlie Nash’s perspective. Maybe then we’ll understand where the hell this fits in the series. But Feb. 2016, get your calendars marked and get hyped!