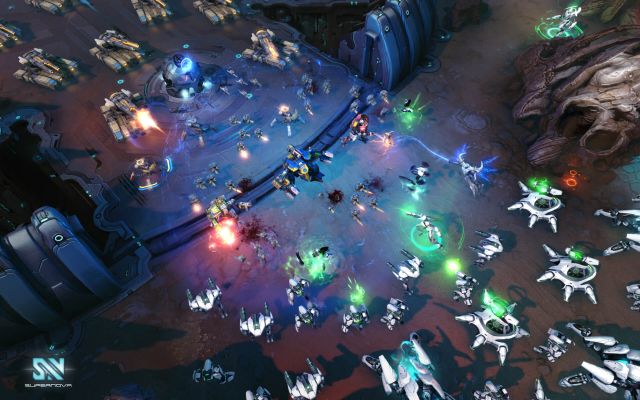 In Supernova the universe is the battle arena, and players must battle as humans or aliens for their race’s right to exist. Commanders from across the galaxy pit themselves against each other to save their race from extinction — only the strongest commanders can save their species from interstellar annihilation. Players choose from a wide variety of commanders to control, such as giant robots, cyborgs, or interstellar races adapted to the unyielding harshness of space.

Atop this creative foundation, Supernova, allows lane minions to be upgraded in ways familiar to any RTS player providing an additional element of strategy to this truly unique MOBA. Infantry, mechanized land and air units provide a rock-paper-scissors triad to push the lane with depth only possible in Supernova.

“Supernova offers players an innovative multiplayer experience, combining a fresh science fiction setting with strategic and contemporary gameplay elements” said In Joon Hwang, Director of Digital Games for BANDAI NAMCO Games America Inc. “Primal Game Studio has done an incredible job of creating a MOBA that is set to redefine the genre, and will offer both MOBA and RTS players a captivating experience.”

Supernova aims to take traditional MOBA gameplay another step further with a crafting mechanism that allows players to improve their battle prowess by combining drops from their matches to create durable boosts to the abilities of their favorite commanders. This ability allows players to extend their strategies beyond their chosen commanders’ base abilities.

Supernova also introduces the Mechanoughts and an unparalleled line-up of Commanders. Mechanoughts are a planet-razing ancient technology that will grant a savvy team megalithic blasting drones, which relentlessly drive to the heart of an enemy’s defenses. Lastly, the possibilities offered by a future, universe-spanning set of civilizations presents a variety of Commanders not limited by any terrestrial imagination.

Supernova is created by Primal Game Studio and is a continuation of BANDAI NAMCO Games’ growth in the free-to-play space. Supernova is a new intellectual property that strives to advance current gameplay standards and deliver pioneering experiences to its players. Supernova starts its Alpha today and will Launch for PC later this year.