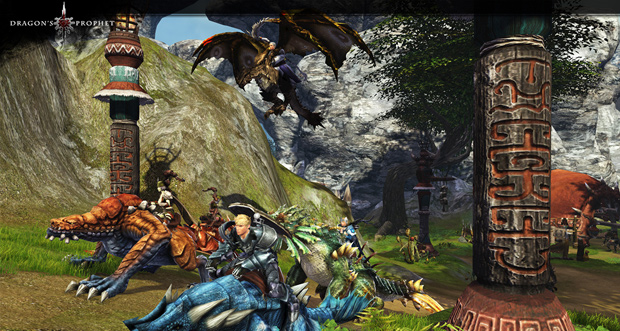 This week I had the chance to sit in on a private demo of one of the first Frontier Battleground matches in the world of Dragon’s Prophet. Senior Producer Todd Carson walked us through the system and, while the overall goal they are trying to reach would put the current state of these battlegrounds at the level of an early beta, the potential here is staggering.

Now this system isn’t targeting the typical demographics most recent MMORPGs have gone after. Rather it’s reinvigorating the player drive storylines so common in the post-WoW period of gaming with titles like Perfect World and Aion where PvP was the true end-goal. However rather than just forcing an economic benefit onto the winners to create some semblance of hatred between factions, this system will create an entire kingdom styled rule where mechanics will make it clear who is in charge at the time on the Frontier Isles. 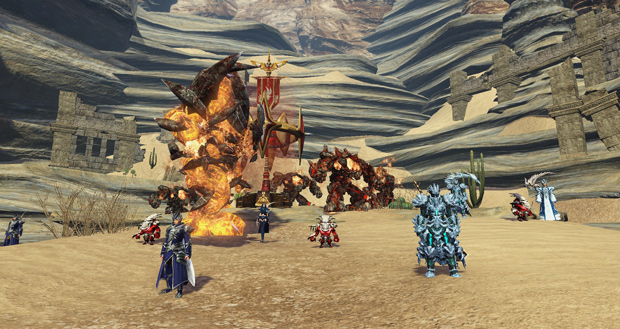 So how does it work? Well in the current form it’s still micromanaged by GMs. When the GM feels like it, they spawn a crystal in the Frontier Isles, a place where players can currently tinker with housing and other sandbox elements. Once destroyed, teleporters appear that can usher players into a massive battleground split between five capture points and countless locales of interaction.

Teams inside this realm are based on pre-established alliances consisting of two to five factions. Each faction must establish points through a variety of means I’ll go into shortly to reign supreme, either by having the most points at the end of the two hour time limit or reaching the goal of 8,000 points.

The main way to earn these points is capturing and holding the five capture points. An alliance gains 500 faction points once in control of any of these five points. The same number of points is lost and given to another faction should your flag fall, but points accrued during your time in charge of that point will remain with you. This ensures alliances aren’t just playing musical chairs gobbling up undefended fortresses ala the launch state of Warhammer Online.

Though truth be told the fortresses are never fully vulnerable. Various themed NPC guardians such as harpies, treants, and water elementals hold down your fort and fight to the death in your stead should the enemy’s fortresses catch you slipping. These NPCs typically can handle a full party of level 80 (max level currently) combatants but anything beyond that and they’ll fall quickly so don’t leave them alone too long.

There’s no shared radar between alliance members as of yet so communication is key in this battleground. The distance between capture points (based on a decent speed flying dragon that doesn’t get interrupted and knocked out of the sky) is on average a minute with the map layout looking like a pentagon with a castle fortress slightly further from the rest of the capture points at the northern edge of the map. Pop-ups will fill you in on the major events happening such as forces attacking your NPCs at a capture point but scouts spotting these raids ahead of time are typically your only chance of reacting fast enough to save your control points. 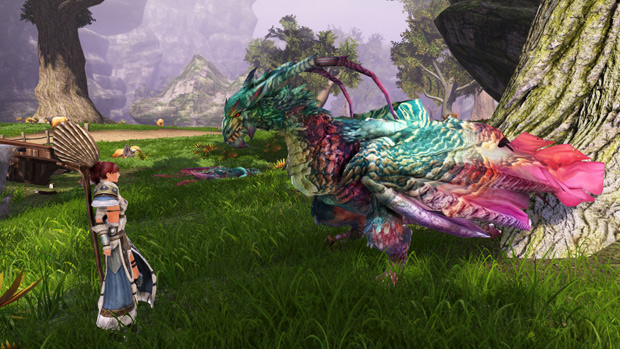 In our demo this battle involved eighth alliances so overall it was pretty chaotic. Points can be earned simply from killing other players so skirmishes in the middle of nowhere was a common sight. There was roughly 280 combatants taking part which is saying something for end-game PvP on a Tuesday afternoon. This number is expected to climb up to closer to 600 in the coming weeks when the Frontier System is more polished and finished. And yes there’s some serious customization options to tone down the graphics should your rig find rendering such epic battles a bit beyond its capabilities.

Other elements exist in the nooks and crannies of the battlefield to keep players from bunching up in one massive lag fest of explosions. Snowdrift Crystals spawn that can be collected and brought back to your capture points to earn additional faction points. Just watch out as you’ll be marked for your enemies once you pick one up, and they’ll be gunning for you to prevent these freebie points.

A siege master can also be spawned and captured to build weapons of war that can be vital for dislodging a powerhouse alliance from a capture point they’re stubbornly defending.

One of the biggest threats though is a doom dragon spawn that will focus on striking down the faction with the largest point lead after 15 to 20 minutes into the battle. My apologies for slaughtering his name but it sounded something along the lines of Drecontoking Yangman. And yes he’s as intimidating as his name leads you to believe. Think a giant stegosaurus with wings wearing battle armor.

The Mysterious Alter is yet another element added into the mix to spice things up. Around the same time as Drecontoking shows his ugly face, an altar will appear on the map. Players of the same alliance can capture and gather around this altar to summon a powerful dragon to fight for their team. However the higher your lead over other alliances, the longer this channeling takes, so choose carefully if it’s worth the risk.

Finally a War Speculator can occasionally be found and killed to score your alliance some extra bonus points. Little features like this make scouting and communication more important in these wars than nearly any of its kind I’ve seen in the MMORPG realm. 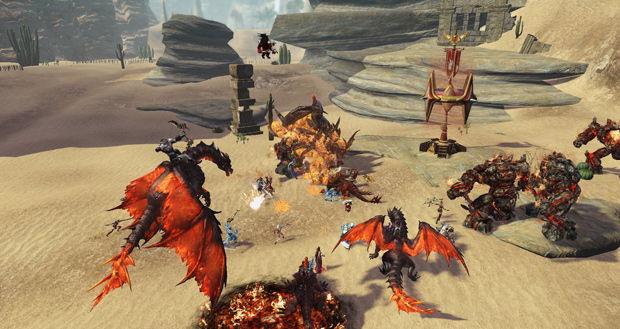 Looking into the Frontier Future

While we only saw one map, Sony claims there are two complete maps to fight in and more coming with each adding Frontier Isle being added in. Beyond this there are future systems coming in which the leader of the winning alliance will be crowned Highlord of the realm.

As Highlord, they will be able to initiate gathering related special events to boost their realm’s productivity, launch hordes of monsters into the housing areas to be a general ass to their enemies, and build defensive structures to prepare for the next round of fighting to maintain their dominance.

When a Highlord is crowned, they are given three to five days (still being tested) to prepare for the coming assault and abuse their power. After the safety net is gone, they will then be in charge of defending the crystal currently spawned by GMs that controls the initiation of the alliance war front. But while the current system initiates the frontier battles simultaneously upon the crystal’s destruction, the final implementation will give the entire server a day’s warning that war is coming. 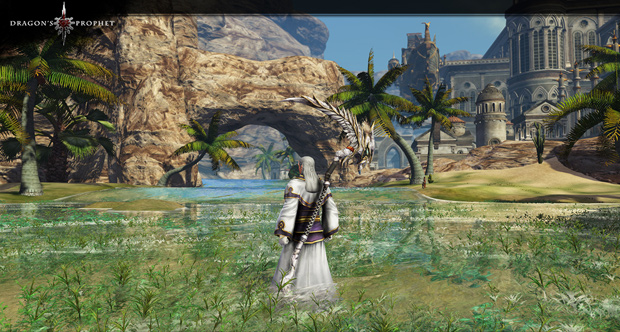 Issues with the Frontier

Although I’m typically pretty critical on the implementation of such features, I honestly don’t have much negativity to say in regards to Dragon Prophet’s. Systems seem well thought out to keep one faction from dominating the world entirely. It sounds like being the winning faction brings in just as much work as reward so it would just grant them complete domination of the lands into eternity like I’ve seen in so many past PvP focused Asian MMORPG grinders.

And best of all is all participants whether they win or lose can earn PvP currency (yet to be implemented) to buy custom skins on armor and weapons as well as other elements of badassery as of yet unrevealed. This should make every faction worth their salt want to get involved in the fights, keeping the event active and popular into the foreseeable future.

An element I’m not terribly thrilled about is that all player kills are worth the same in this event. It gives alliances no incentive to protect their leadership. And it punishes alliances for bringing lower level weaker participants into battle. As far as I could tell, there isn’t a limitation on who in your alliance is allowed to enter these battles, so it may be a liability for guild leaders to even allow lower level players into their faction since they could cost you points in these battles.

That aside, it’s an easily rectified issue that isn’t inherently built into the system. I look forward to seeing the full Highlord system and new maps on display as this game continues to progress. Though it carries a launch label now, it’s still very much a game in beta with plenty of outstanding ideas in the works and coming soon. Here’s hoping we see some underwater fortifications in future battlegrounds!