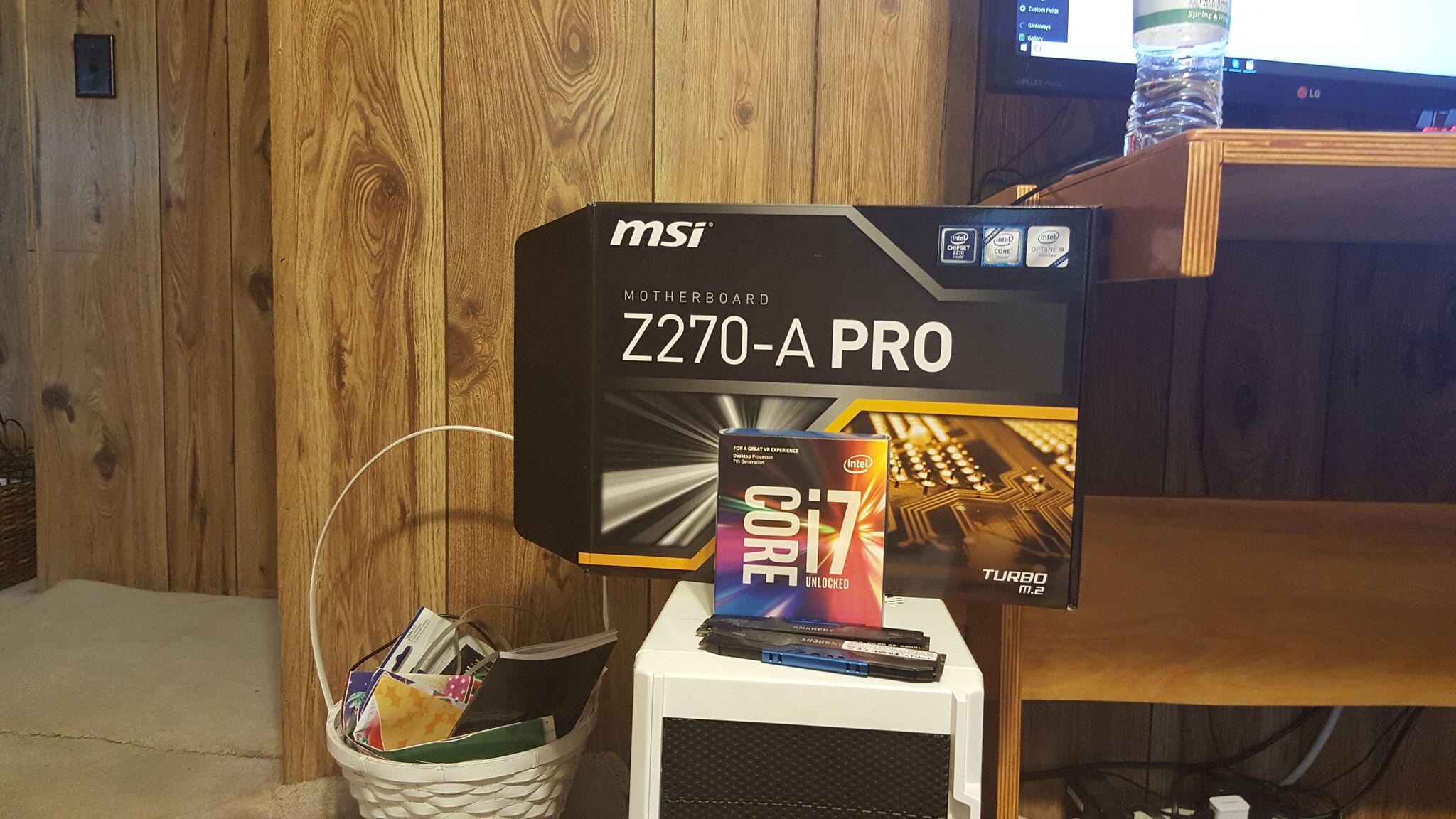 I’ve always thought that I was at least somewhat decent with computers until I swapped from AMD processor to an Intel one. I’ve used an Intel before, with one of their Quad Cores [when they first came out, mind.  Don’t miss that Del tower though]. Recently, Intel sent me an i7 to run through the paces, for the purposes of a news piece. The review of the Intel i7 7700k is less of a “review of the processor”, though I’m going to do what I can there, and more of “Who is this thing useful for? Do you need it? Should you want it?” and I’m going to attempt to answer those questions because I have a pretty good idea about that now. I do have to say, I went from an AMD six-core [3.3 ghz] which was about four or five years old, to this i7. And my first impression, once everything was working properly set into place, is this: I have never felt so powerful on a PC before. This processor does literally everything I need it to do, and so much more. I built my old PC on a very strict budget. I needed it to play video games and write papers on, which it did both pretty well. But streaming, something that’s far more CPU intensive, wasn’t really doing so well. It was okay, but it wasn’t great. Certainly a good starter CPU. 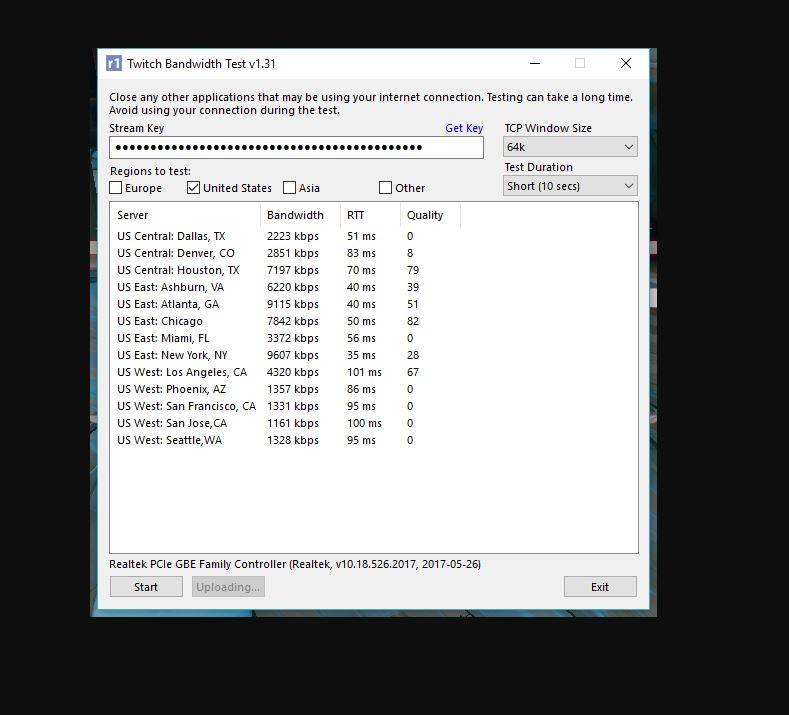 CPU + Internet Test; I managed to get 10k later.

So I went onto a CPU Benchmark lookup and tried to find them even on the same page. They don’t even come close to being on the same page. It was a gigantic step up. I have never felt like I could do so much without stressing or worrying that I didn’t have the power to do so. I had to buy a new motherboard, new RAM, and I do need a new graphics card [though I can still use my Nvidia GTX 960. I ordered a newer card, but it never got to me. It is what it is though]. I opted to go with the MSI Z270-A Pro motherboard, and the i7 does work fantastically with the 200 series motherboard. I learned so much in this process though. I learned that I absolutely needed DDR4 RAM, which thankfully was not an issue. Though I have not overclocked it [yet, a friend’s going to come help me with that process] it can go up to 5.0 GHz, which is absolutely ridiculous. It’s 4K Ready, which my PC is not quite there yet. . . once my graphics card is updated, my goal is to try to do beautiful 4k gaming. That also requires a new monitor or two, but that’s a whole different discussion for another time.

This is mostly for advice for people who are going to be new to building a PC/swapping motherboards because part of this experience was an absolute nightmare for me. It made me feel quite foolish. So, I had to swap out most of my parts in my PC, and that was okay. Once all the parts were in, I had to acquire a new cooling system because not only did Corsair send me the wrong bracket, but the cooling system I had was not compatible with my motherboard’s chipset. . . My PC would boot up but simply would not update drivers. I tried and tried for hours. Only to figure out the next day that I needed to flush all those old drivers out of my system, so what was the solution? Either put a brand new hard drive in [no] or reformat/uninstall all drivers [yes].  I didn’t lose much of that drive, my boot drive really only had Windows, and a few games like Final Fantasy XIV, Heroes of the Storm, Overwatch and SMITE. Literally all that was on there. So, that hurdle was overcome, drivers were installed, and then I had yet another problem, which was not anyone’s fault but a hardware issue. My RAM channels, well, one of them, did not work! This motherboard uses a pretty weird channel set [1, 2 and 3, 4], and I had to use Channel B [3rd and 4th slots], which is not usual, apparently. It took me about three days total, to get this build going, mostly because I didn’t know quite what I was doing. I thought that because I built the other tower almost completely by myself [I did get a friend on Skype to help me make sure everything was good to go], that I could just … make it happen. There are so many differences in the AMD and Intel chipsets and drivers, the biggest advice I can give for someone who is upgrading is this: DO YOUR DAMN HOMEWORK. Research, learn how it is installed, read the manual, and make certain if you are going from AMD to Intel, to make sure it is either a fresh drive, or it has no remnants of your old processor lying about. Since I do a lot of live streaming, I did wonder if AMD is even good for live streaming, and shy of their really big [or upcoming Ryzen CPUs], AMD tend are not quite as powerful. They have a lower IPC [Instructions Per Clock] and even the first i7 processors are still better than a current AMD. 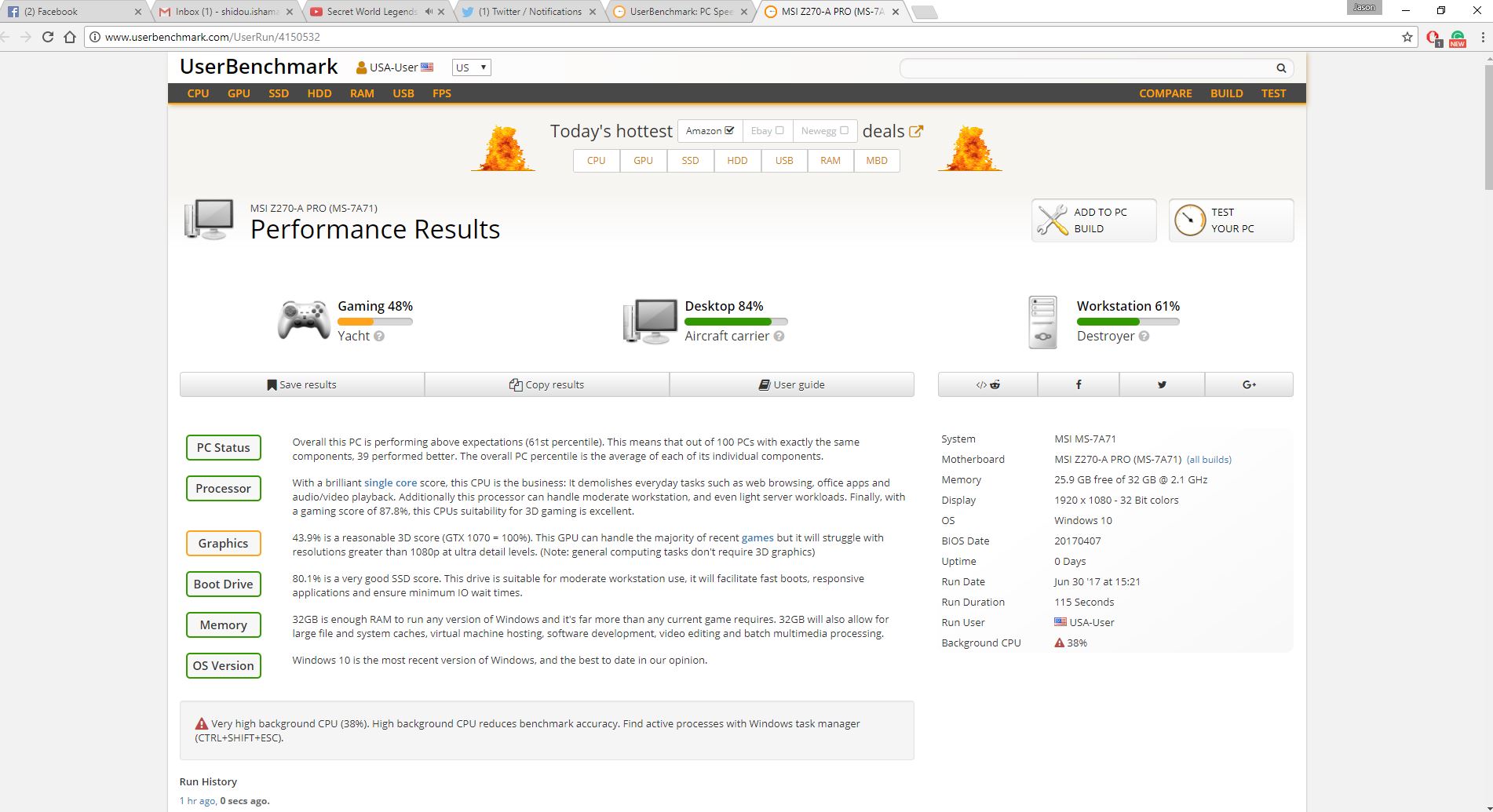 Userbenchmark Users and myself love it.

Now the real question is, do you truly need an i7 over an i5? Anyone in sales/marketing is going to say “Yes, you absolutely do! It’s the best processor out on the market and for gaming, it’s a must!” and that’s all well and good … but the high-end i5s are just as good for gaming, from what I’ve seen. But I do want to say this: Almost everyone I know does some kind of live streaming. Whether it’s for cosplay, prop building, music, art, or gaming, almost everyone’s doing it. With that said, if you have an inkling that you might stream, you’re better off just getting the highest end CPU you possibly can. Live streaming is an incredibly CPU intensive process, not really going into your RAM or your GPU at all. That’s more for the thing you’re streaming [for gaming purposes] and if you’re going to go, go big. Get the i7. It feels so powerful, I can stream in beautiful quality without any slowdown or issues, no matter what I’ve tested so far. From Black Desert to Final Fantasy 1, everything has looked gorgeous. Now I will say that for someone who already has an i7, like say the 6700, they’re virtually identical. You won’t even notice the changes from one to the next if you’re already on that tier of CPU. But for those of us who were living in the stone age? It’s like going from rollerskates to an Audi. Are there better/more powerful CPUs than this one? Sure, of course, there is. But for what you’d be spending, it’s absolutely worth the money. You can float on the back of a really good GPU, but it won’t really help like the CPU will.

Do You Need It? Survey Says Yes. [5/5, ideal for livestreaming]

I can still make this PC stronger. I have 16GB of RAM, which is more than I really need. But I like it, and I want it. Is it really ready for 4K or VR? Not quite, not with that graphics card. The VR gaming does not bother me because it causes me quite a bit of nausea and motion sickness. This is not as powerful as it can be, but it is by no means the fault of the CPU. It’s glorious, it’s capable of live streaming whatever I care to, as long as I have the Internet Bandwidth for it. Don’t think that just because you have an i7, you’re good to go. I highly recommend at least having 10 megs up for your Internet, but more is always better.  I used a variety of methods to test my gaming to see what I could do and could not do. 3DMark [benchmarking process on Steam], the Userbenchmark Website, the TwitchTest program, and simply running a variety of processes/games at once to see what it could handle and check my CPU usage. Going through the traditional methods of benchmarking, such as using a variety of video editing/graphical editing programs did not work for me, because my purpose is for live streaming, not much else. But at the end of the day, if you want to stream, and want to be as thorough as possible, is this the CPU you want? God yes.  This will handle the burden. The ability to be entertaining and clever? That’s all on you. The Intel i7 7700k will give you the power, you just have to do the rest; it does the heavy lifting for you.