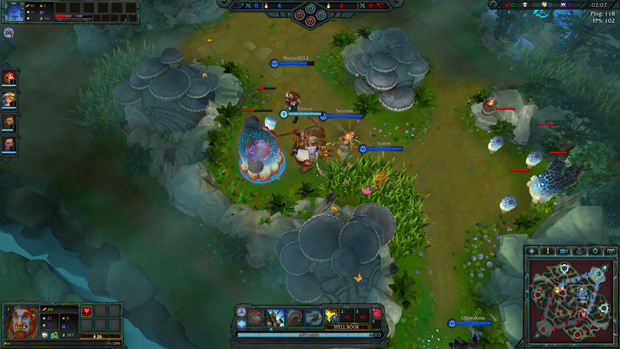 Some naysayers claimed the MOBA genre was just a passing fad that couldn’t support more than a few games at a time. Yet now in 2013 we’re knee deep in new MOBAs, each offering a different take or tweak on the tried and true formulas of past titles. Not only is it fun to play with your buddies, you can test your skill and gain ranking against the rest of your game’s population. I couldn’t be happier as nothing brightens my day as much as being asked to cover a MOBA for my latest assignment. And so that assignment has come in the form of Dawngate, a new MOBA trying to make a name for itself as development continues through various short beta phases. I managed to snag a key off their Reddit page and test out the latest phase. 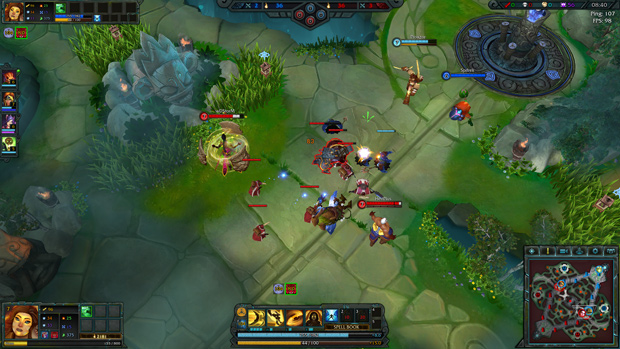 The company behind this game is Waystone Games, a studio most of you are probably hearing about for the first time. Dawngate is actually their first title to enter testing. If you’re a sucker for close communications with the development team, Waystone won’t disappoint. With the community still as small as it is, and the game features still in such heavy flux, now is the ideal time to chat it up with them and see if you can influence the development of Dawngate towards your vision of what a MOBA should be. Beyond forum communications, it’s not uncommon to see a known developer in-game testing various factors. I get the feeling from my brief interaction with them that Waystone is a company consisting of gamers, seeking to make a MOBA for gamers rather than for profit.

Now onto the actual game! What is the standard MOBA and what is Dawngate doing to tweak the rules? Well for the newcomers of this genre, a MOBA or Multiplayer Online Battle Arena is a type of strategy game you play as a team. Usually the map is symmetric and you have a team of 5 players on each side. And usually there are three lanes for players to play on along with zig zagging routes between the lanes filled with monsters you can kill for bonus experience. The first initiative Dawngate makes to change the rules is the set-up of the map itself. In Dawngate you only have two lanes, and a bigger jungle that actually has a meaning besides a way to grab some quick cash and the occasional buffs. You see in addition to the standard monster spawns, there are also four camps, 2 per team, that automatically farm money for you. But these camps can also be taken over, so a jungler’s role evolves beyond farmer and ganker to also include gate keeper as they’ll have to keep constant vigil that their team’s camps aren’t overrun. The jungle is too large for one player to manage themselves so the entire team will need map awareness to recognize when someone is missing so that camp conquest can be prevented. Once a camp is captured, you gain control of its gold flow and gain a temporary lock so your rivals can’t just capture it straight back right after. As a result, team fights happen more often and less predictably compared to other MOBAs I’ve experienced. 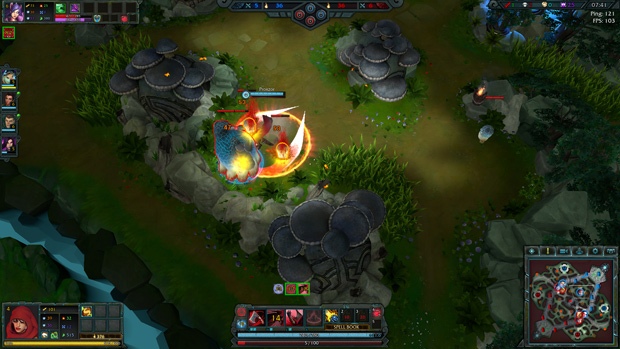 These map changes are interesting and shake up the gameplay, but I have my doubts about the system. It’s challenging to implement something that is completely different than what the usual MOBA player is comfortable with; MOBA players typically get struck in a rut where they’ve worked so hard to master their systems that they react with anger when the game doesn’t fit their desired mold. Sure if the new system’s fun factor overrides that initial hate, it can work. But I don’t think Dawngate has found the right balance as of yet.

The major flaw with their map comes when one team is badly losing the laning phase. If your opponents get an early lead and play smart, they can keep your team constantly pushed back against their towers, meaning there is no way you can jump from your lane to defend your jungle camps. This results in the already dominant team gaining four sources of passive income to steamroll to an easy win. It’s like kicking someone that is already down on the ground begging for forgiveness. 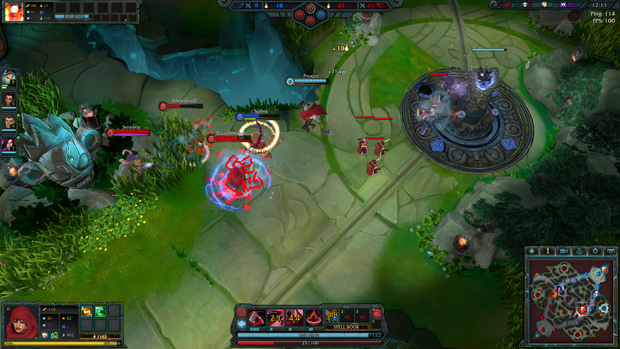 Terms of Heroes or Champions might sound familiar to you, but in Dawngate these heroes are called Shapers. Currently the game is limited to an unusually small pool of shapers, with only around 10 available to play. And even though Waystone has put an admirable amount of effort into making the Shapers look and sound unique, their kits feel directly inspired from characters seen in other MOBAs. Without a doubt, new games will take something from old and successful games, but some of these Shapers are in my eyes a little too much inspired by some of them.

Thankfully this kit stealing is alleviated slightly by the role choosing system. Each shaper is able to choose a role prior to the start of each match. This means you can actually play a single Shaper in various lanes and still be viable. Do you feel like playing the carry role in the lanes? You simply choose one of the four available ‘roles’ and boom you get the extra required stats that will grant you the needed bonuses for the lane. The four roles you can pick from are the Gladiator that is meant for the carries, the Tactician that is meant for the support role, the Hunter that is made for jungling and the Predator for the Shapers wanting to roam the map. I imagine this system is incredibly difficult to balance and give Waystone props for introducing it since it kills two birds with one stone. It keeps the game fresh for a longer period of time while allowing players a better chance of choosing the Shaper of their choice since you won’t be locked out on playing them just because someone called their standard lane on your team. 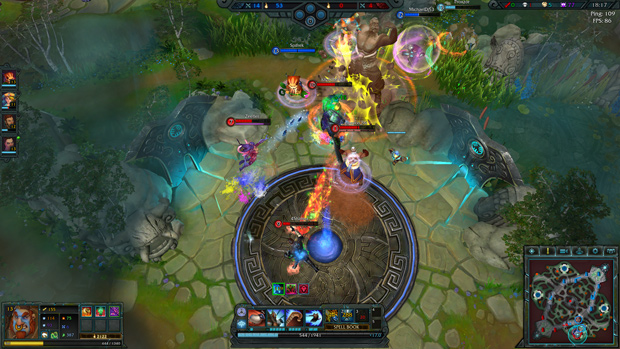 I hopped into Dawngate after reading Hhean’s article a few months back expecting to see a much more polished title. It’s clear though that Dawngate is still in a phase of heavy development, but you can see they are picking the pieces and shaping this into a truly promising MOBA. Despite my various issues, overall I left the game knowing I had an enjoyable experience, and their twists on the standard MOBA, while not perfect, still left a good impression when imagining what they could offer when polished for launch. As far as the gameplay and graphics, I do not want to go into full detail yet since the game can change a lot, but the gameplay itself was smooth, and the graphics are certainly on par with the competition. All in all it looks like S.S. Dawngate is sailing on the right course, and barring any icebergs, should arrive as one pretty vessel come launch day.