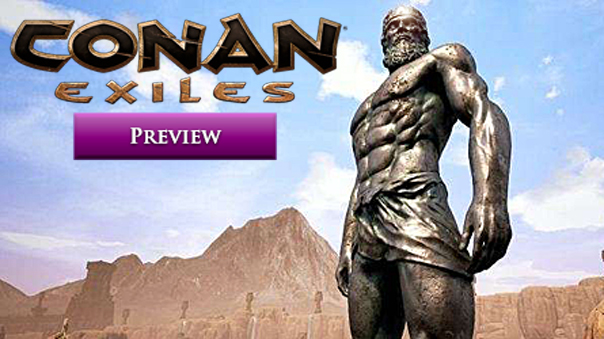 I have always been a huge fan of the Conan series; both the books and some of the games have been phenomenal in their own ways. But it has been a while since I last touched something Conan related. Age of Conan was the last game I played, and despite absolutely loving it, it never really was seen as a huge success, despite being perhaps one of the better MMO’s in the genre. I mean, it’s one of the few in this dark age to still be alive, and it’s been competing for many years now! Funcom didn’t do the game much good either. They are great at making games, but post-launch support is always questionable. How will they fare with Conan Exiles and an early access model? Let’s find out!

Conan Exiles is a game that is best compared with the likes of Rust and Ark. And throughout this review I will be doing so, since these are probably the best survival games available at the moment. And since all three games are still in early access, we can easily compare them for the moment, since they are all supposedly not finished yet.

The player first starts out in the desert, where you will be saved by the great Conan himself. But before you realize what is happening, Conan is gone and you are left by yourself. Just like in any survival game, this is where your journey starts, and the sandbox elements come forward. You are free to do what you please, but obviously the main goal is to survive, make yourself something that resembles a home, and build upwards from there. If you know the story of Conan, and everything around it, you know that the world is a savage and brutal place. Mystical monsters and all sort of bloodthirsty clans populate the world to make the world your own living hell. First things first, let’s talk about the graphics. Do they portray the Conan story well?

An awkward introduction to the world of Conan.

I have to admit, Conan Exiles is probably one of the better looking games I have seen in a while, but this also comes with a cost. The game’s optimization isn’t great, in fact I just built a new computer only a few weeks ago, with the best parts available on the market, and even I still struggle to run the game at a crispy 60 frames per second. Obviously I have to lower the graphics to get it to run better, but since you possibly can’t get any better parts in your computer than I did a few weeks ago, it seems to raise a few red flags. The game just went into early access, but since they’re asking money for it, let’s stop using it as an excuse, and instead wonder what they were thinking. Since technology didn’t really go that far forward in the past few years, where are my frames Funcom? What kind of computer did you make this game for?

If you look closely, you can identify the exact moment the alligator ran out of fucks to give.

Now that we have this out of the way, let’s talk about the game, and how well it plays. Conan Exiles isn’t only set in a brutal world, the game in general is just very brutal for the first couple of hours you play. Since your character is simply ‘capped’ by a leveling system, there isn’t a lot you can do in the first couple of hours except gathering, and dying. Yes you die a lot. The game simply doesn’t give you a break. Behind every ridge, river or sand dune something is just waiting to kill you, be it an alligator, or some of the spawned in NPCs that will chase you to the other side of the world. Speaking of the world, right now there is only one world seed available, meaning that every server, be it player versus player or versus environment only, is played on the exact same map. Talking about server choices, Funcom invented and implemented a few server options, so that you can easily pick the server settings according to your player style. Meaning that if you are a somewhat more hardcore and active player, there are specific servers set online that try to bring the hardcore players together, and there are servers bringing casual players together. Definitely a great idea to implement, but I can see plenty of issues arise with this idea already. Nonetheless, a nice addition, and hopefully it’ll work out.

Old Spice keeps you cool under pressure, no matter how much blood you’ve lost.

Coming back to the Leveling System. Generally gathering or doing anything at all in the game will grant you experience. When you get enough experience, you get to level up. This type of system is probably very familiar to us veteran MMORPG players, but perhaps not the best progression system you can imagine in a sandbox survival game. Just take a look at Rust.Every month they have a different system in place, trying to get to the best possible way to make it fair and balanced to everyone. Needless to say, in Rust it isn’t going as great as they had hoped, and I cannot wait for the next flavor of the month system they will put in place. One thing is for sure, a teenage girl going to prom probably makes her decision faster on what clothes to wear than Facepunch Studios does with what type of system they want to have in place.

It is a tough choice, I agree, but in Conan Exiles you are very limited in your level gains. When you level you get two type of points: points to build up your character (stats) and points to learn crafting recipes. Now do note that your character does not transfer over to different servers, so you only level your character for the particular server you play on. And this is where I honestly found a lot of the problems I have with the game. In the first couple of weeks the game simply was unstable. Many were lagging, and since only official servers were in place that crashed after a mere two hours, I decided to wait a couple of weeks to really dive into the game. This allowed me to play the game more, but I do feel like I was really far behind everyone that played on the server for a longer period of time.

After my days lost in the desert… at last I can… well damn.

And this seems fair – progressing in a survival game should be rewarding, but everyone simply bullied me and I was forced to progress in a different way than others. Since the servers do not wipe as often as Rust, which can be seen as both a good and bad thing, it felt like I was destined to remain an underdog player for the distant foreseeable future in Conan Exiles. The first thing you have to do is get yourself a safe place to set up your first home. And here I ran into many other issues. You’re denied the ability to build your home closely to where another home is already established.  Compounding this is how few home spaces there are available in the ‘starting zone.’ In Conan Exiles you spawn all the way in the south, unless you have a mattress, and you will spawn there instead. When you go north you will gradually walk towards stronger animals and monsters to keep it fair and balanced. This creates region tiers akin to an MMORPG where the newby players stay in the southern playground while the big tough dudes slowly push their limits as they march north to the end game. How it happened in reality though was a bunch of noobies were trapped in overcrowded slums in the south with less potential for progression as most of us lacked housing. Perhaps if I had friends, this problem would have been mitigated, but playing the game solo is rough going.

The last thing I still want to talk about is the combat system in place. The game is all about the melee weapons, and even though you can play with a bow, everyone usually builds towards melee weapons since they are faster and simply just better. And the combat is just… bad. There is no other word for it. From the moment you attack the first monster or animal on sight, you know it just doesn’t work as you want. Half the time you miss, and it doesn’t really feel like it rewards skill. And since the combat is so important in a survival game, I definitely look a lot less positive towards the game. I still remember many of the great fights I experienced in Rust, but in Conan Exiles, I don’t want to remember a single one of them.

I will not be remembered as the guy beaten to death by a topless woman. Suicide it is.

I’m not going to spin it, the game has potential, but in its current state I wouldn’t recommend it to anyone. The game looks great, but the performance isn’t there yet. The combat is lackluster, getting further into the game takes a ton of patience, and you really have to bite the bullet and make the best of it if you want to have fun in this game. The concept of the game is great, it does feel like a Conan game with dangers around every single corner you turn, but in this current state I wouldn’t see why you would play Conan Exiles over the more polished survival games on the market. Give it a few months, perhaps even a year and maybe then I will give it another look. But for now, it’ll get thrown onto the pile of Early Access games I have bought over the recent years, sitting stagnant with not much hope of returning to in the future.