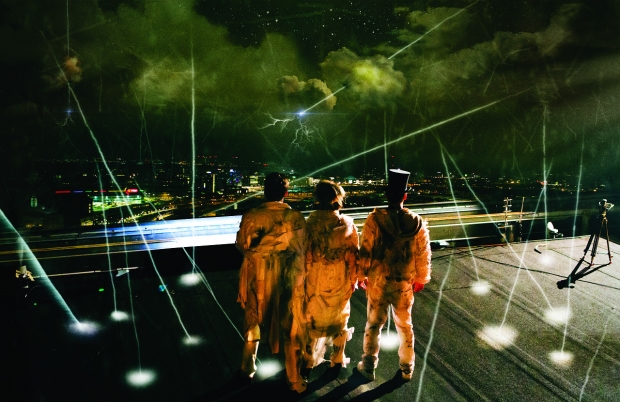 Cloud Chamber is a new multiplayer game where players work collaboratively to unravel a mystery of murder, music and astrophysics. Starring Gethin Anthony (Game of Thrones) and Jesper Christensen (Quantum of Solace), it’s a story exploration game along the lines of Dear Esther or Gone Home, but where thousands of players join forces to solve the puzzle together.
The game follows the investigations of young scientist Kathleen Petersen into the Petersen Institute, one of Europe’s most prestigious scientific centres. While investigating the suspicious circumstances of her mother’s death there, Kathleen uncovers a skein of astonishing revelations about her father, the Institute and the existence of communicative rhythms in the fabric of space. Soon she’s faced with an impossible choice between loyalty to her family and a duty to pass on what seems to be a mysterious warning to mankind.

“Story games have always been single-player, graphical experiences – but the world is networked now, and it mixes media types all the time. We tried to make a story game that reflects that,” explained the game’s creative director, Christian Fonnesbech.

Lee Hutchinson of distributors Double Eleven said: “We are very happy to be distributing Cloud Chamber for PC and also to have played a small part in the production. It’s great to see such an amazing achievement knowing that it was once just a collection of thoughts in Christian’s head!”

“After 4 years on the project, the whole team has a bad case of stage fright right now – but the previews have really given us confidence,” said Christian Fonnesbech. “Journalists really seemed to enjoy the idea of piecing a complex story together in collaboration with others. Now, here comes the big one: what will the global gaming audience think of this new thing we have made? Are they ready? Are we? I don’t know.”

Already an award-winner after a successful beta in its native Denmark, Cloud Chamber is now available globally via Steam and other digital distributors, priced at $19.99.