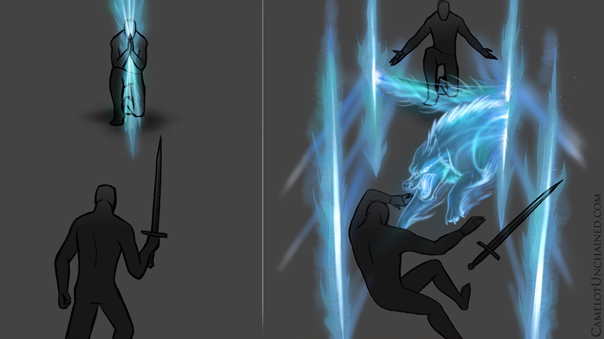 Last week we reported briefly on the latest stretch goal being added to the ever growing list of game features in upcoming PvP focused tri-realm mmorpg, Camelot Unchained. However as anyone who has access to the Backer’s forum know, the reveal of the Spirit in the Sky Summoner/Pet class left far more questions asked than answered. So today Mark Jacobs has released a new update hoping to paint a more solid picture of these ethereal additions.

For starters, Mark is against two things typical of pet classes. One is Camelot Unchained pets will be light graphically, ensuring basic art rendering for faster development as well as less lag on the battlefield. Second, he emphasized that all three (one per realm) versions of this class will not be your standard fire and forget hunter class that often allows a pet to do your dirty work while you afk fire your bow, sipping your morning cappuccino. Instead he claims there will be very active and reactionary skill use by the class to maximize their pets effectiveness, including a system of summoning various portals to the veil to unleash their pets properly on their enemies.

Also mentioned in the overview is that these pets will be incorporated into the existing promises of the skill system, meaning they are both A.I.R. compliant (reactive to rival spells, weather effects, etc…) and customizable through component choice. As such you can expect just as much Path specialization and variants of a single standard spirit type from these classes as you would any other class in Camelot Unchained. Some pets will be able to ignore walls, some will move faster, reveal hidden minerals to crafters, and some may even act as more stationary turrets to set traps or buff nearby allies, not unlike Guild Wars 1 fans would think of a Ritualist.

Mark then went a little bat shit crazy, as he tends to do, by introducing the Pokemon style concept of scouring the world to capture spirit components, including The Depths. I think he wants your imagination to run a bit wild on how that might work, but we’re hoping it will relate somehow to crafters and specializing pets as both weapons and skills.

Of course it should be reinforced that this is the first Extender Pack Plus, meaning this is a concept they hope to have in at launch, but will not delay launch for if it ends up requiring more time than expected.

Be sure to check out more images and the full overview of the Spirit in the Sky stretch goal on the official site.