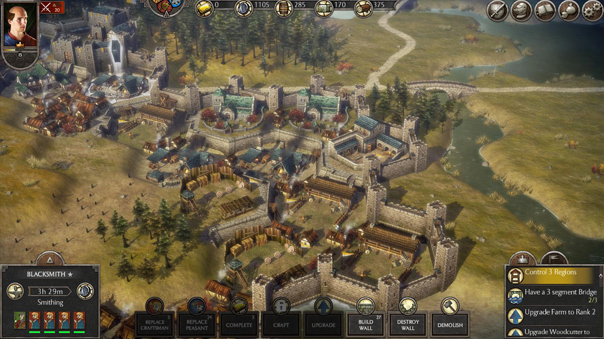 Introduction
Total War Battles: Kingdoms is a multiplayer Strategy game. The game is free-to-play and features hex-based city building, resource management, and (of course) battles. As the name suggests, the goal of the game is to build your own Kingdom and rise to the top through excellent management of your lands and defeating your fellow lords, while dispatching various smaller enemies along the way. So far, the game has managed to receive a “Mostly Negative” rating on Steam, with over 980 player reviews. I’ll be delving into the game to figure out just why the game seems to be inciting such a negative response and to perhaps see if it’s capable of being saved.

Customization
Honestly, early on, there isn’t much. At the start you get to customize an avatar-portrait, with very few options to choose from. For the first small portion of the game you will be following a tutorial guide to a T when building your first castle-city, so your first town will probably look quite similar to everyone else. I have to admit, though, that later building is quite free-form and you will (probably) have fun building your towns. Customizing your armies is a source of customization – especially when you consider you can upgrade various stats, equipments, or abilities of your units – but there are some limitations. You don’t want to bring six archers to a fight, usually, for example. There are certain compositions you can make use of that will give you a decent chance in most fight, while there are other compositions that will put you at a disadvantage. 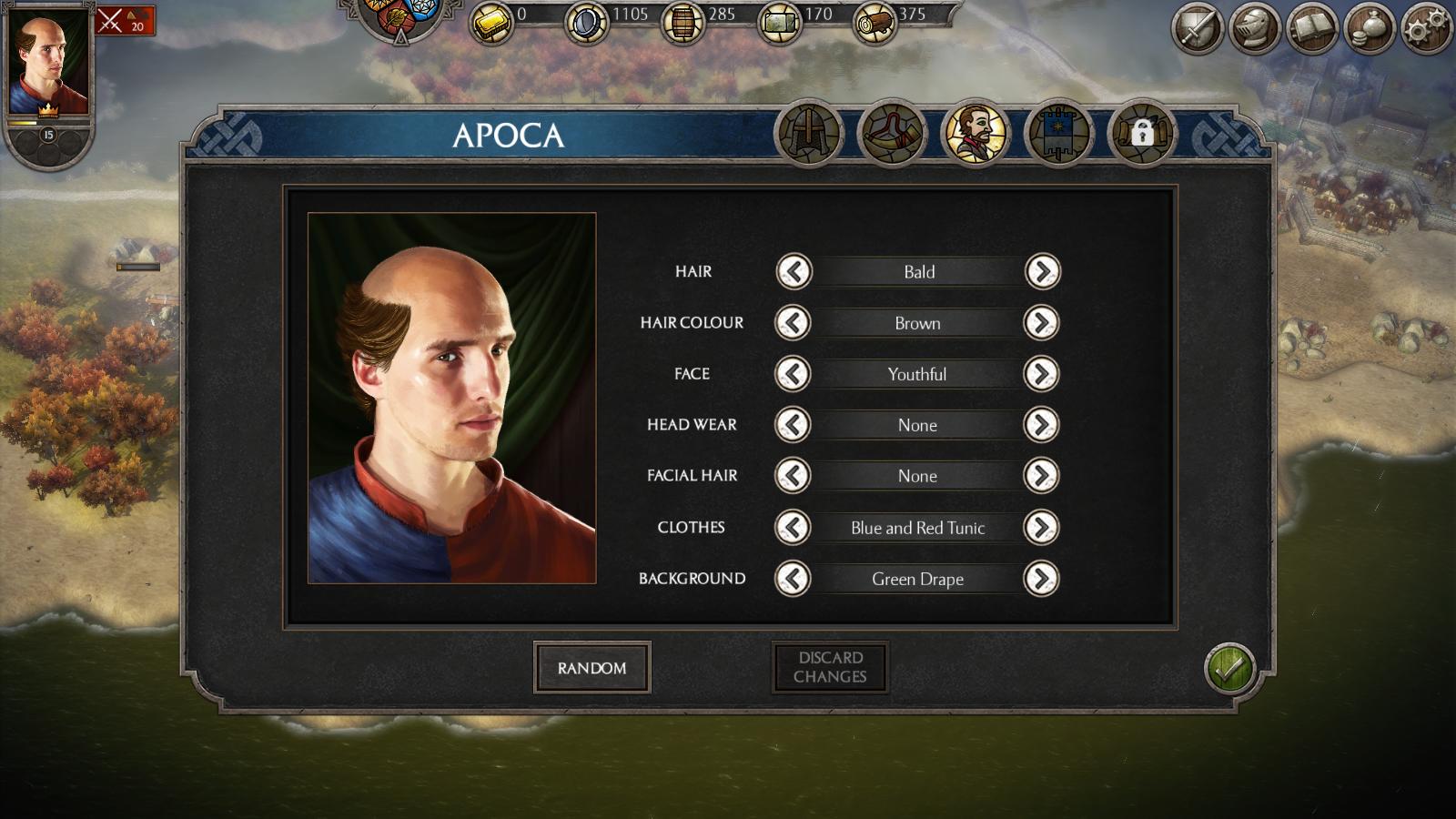 Bald as a hair style was a nice addition.

There are some issues I have with the customization, though. Gold is required to gain access to some options. For example, to get the full range of options to customize your banner you will need to use some gold, or if you want to use some of the better units or equip said units with the best equipment, you will need to pay gold. As the game isn’t that focused on PVP, you may not have an issue with this. Personally, I found it annoying and restrictive that I could pay to have full customization options or to build the strongest army.

Graphics
The game looks decent for what it is. With most free-to-play strategy games, you can’t have much expectation for decent graphics unless you want to be disappointed. Total War Battles: Kingdoms, however, did not disappoint at all. I actually find myself enjoying the graphics. This was one of the redeeming features of the game as the game world felt alive, and I liked that I could zoom into my towns and peek in on them (even if all the buildings looked the same and didn’t change). My only complaint is that I couldn’t see any of my citizens in the village doing their thing.

Controls
The controls were great, so far as I’ve experienced them. The game runs fantastically and there was no lag when it came to clicking on things. Most (if not all) of the game can be interacted with just the mouse, which is nice. Everything was very intuitive, too. Even without the tutorial, it would probably only take you a few minutes of fiddling around to figure most things out. So I was pleased with the controls. 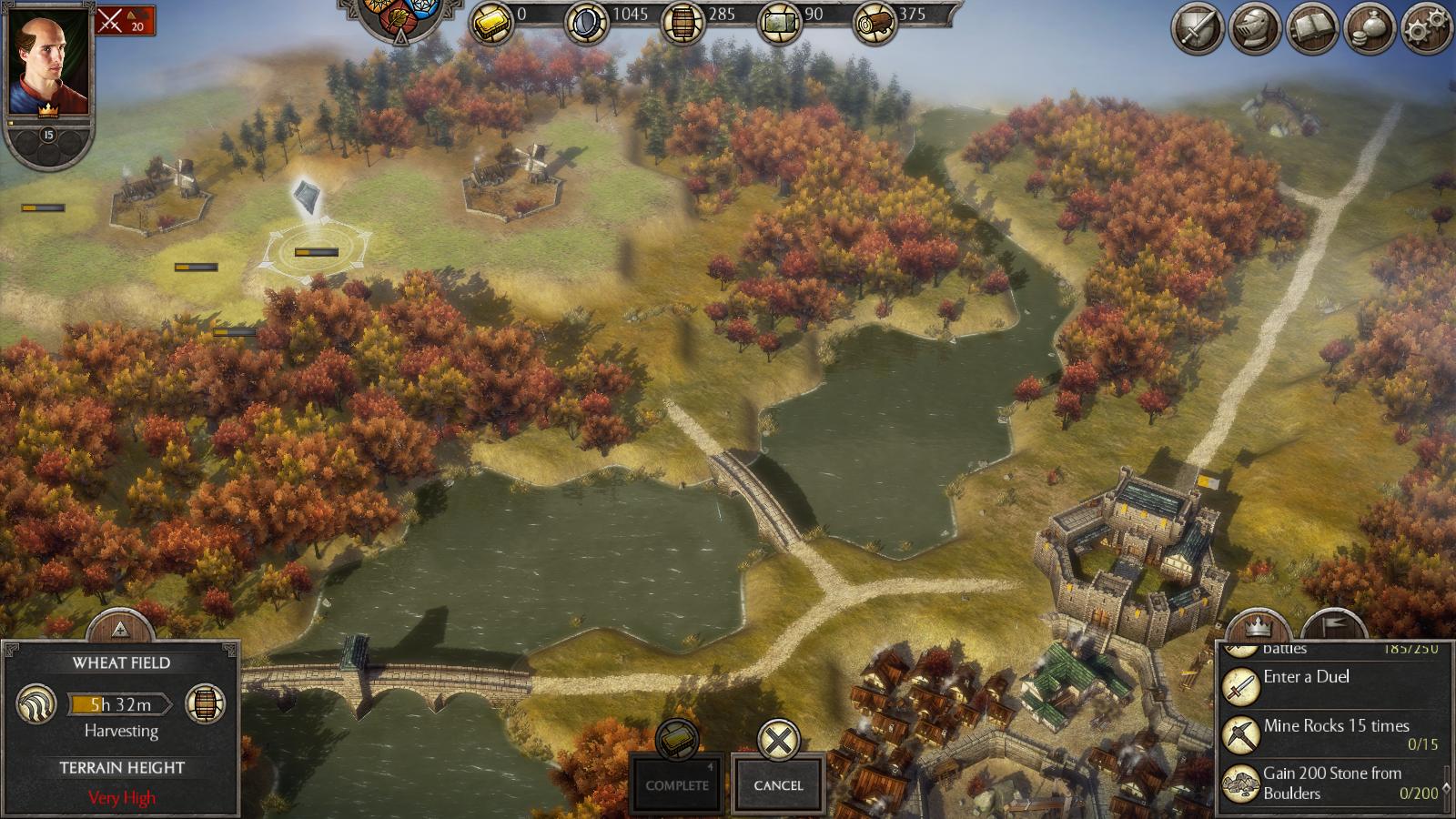 Given the style of game, the graphics certainly impress.

Community
The game, though multiplayer, doesn’t really have much of a community aspect. Most of your player interactions will probably be (unless new features are added) centered around dueling (one versus one battles against other players). The Steam forums for the game seem to be filled with a lot of criticism for the game, and the official forums are about the same. There are a few passionate players who really enjoy the game and defend it where they can, though. I feel like the gamer community would have been a lot more understanding and welcoming of the game if it had been mobile, or even browser, only.

Gameplay
This is one of the harder games for me to review. On the one hand, I like a lot of the game play elements. But on the other hand, I find it hard to enjoy the game in its Steam/client-based format and would much rather have played it as a mobile game. This is mostly because of the long wait times – be it sixteen hours to harvest wheat (not counting the time it takes for it to regrow) or the fifteen minute wait times for units to heal after a battle. To me, it makes more sense to have that kind of gameplay as a browser or mobile game, so that I can do other things in-between without having to go through so much hassle. 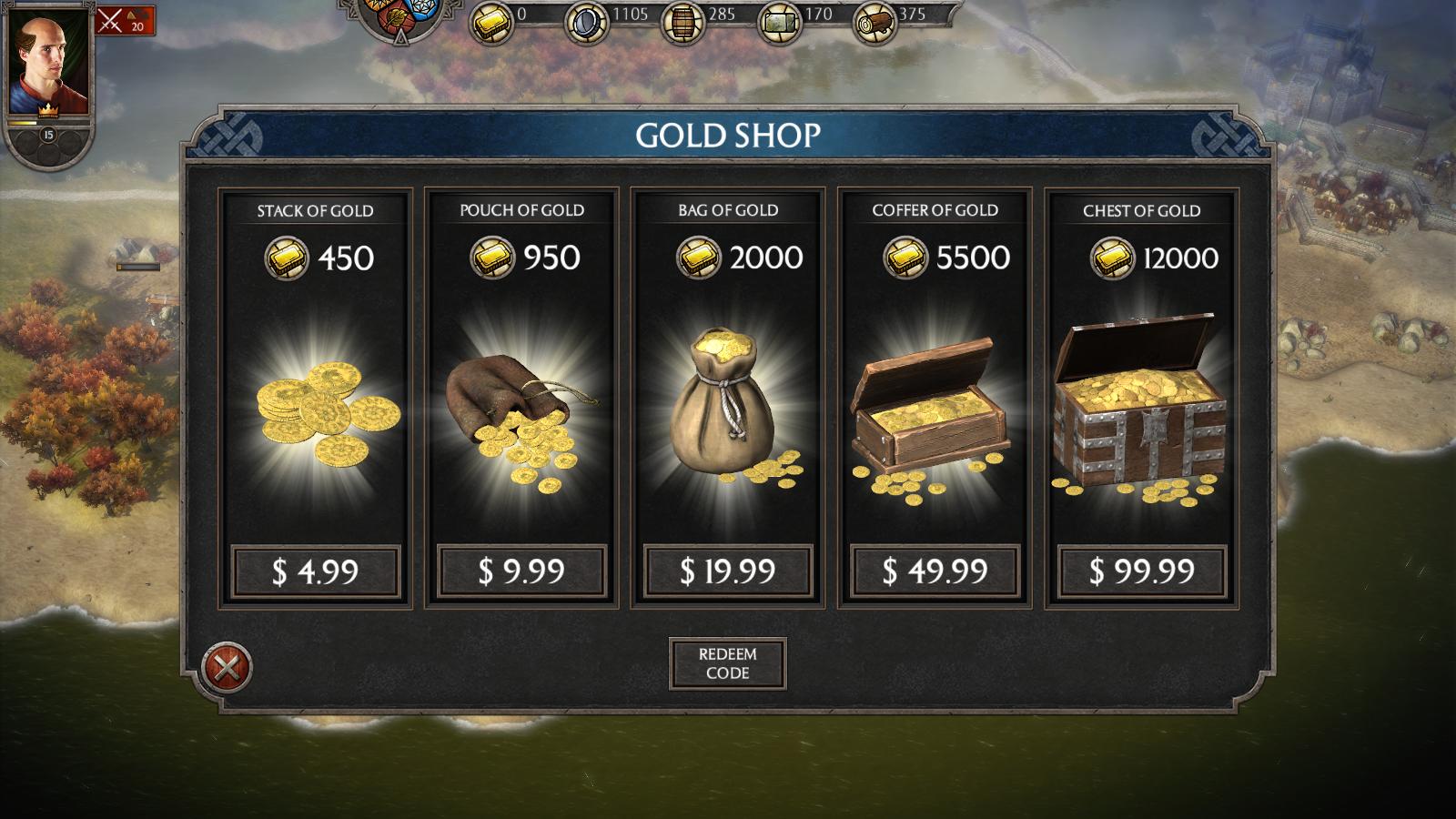 If you want to play seriously, you'll be on this screen plenty.

It just made it a chore to get on my computer, log into steam, open the game, log into the game, and then do about three minutes of chores and a single battle. You could do back-to-back battles by either spending gold or developing a great many units. Even if you were to only spend gold to heal units instantly, it would add up fast and would (at my guesstimate) cost you upwards of $20 a week. As for the other option… well it isn’t really an option because, at least in the first ten hours of gameplay, that is extremely hard to do due to resource restrictions combined with limited space. So, at least for the first ten hours of time spent in-game (that isn’t total time… that’s time that you’ve actually spent inside the game and logged in) you’re going to be stuck with these long wait times unless you want to shell out a decent chunk of change.

The city building is decent – you’re given the freedom to do things how you like. There are mini-guidance missions in the bottom right corner that will help entice you to do certain things – like build walls around your cities or create a certain number of a certain building. For the most part, this isn’t tainted by the “Gold issue” so it’s rewarding. The resources are an issue, though, as it can take a while to get a decent resource base created so you’re not constantly starving for things like food or stone. And of course you can pay gold to speed that process along. Heck, I actually have no issue waiting a few hours for things, it’s just when it takes sixteen hours to gather a resource (and I suppose this goes down as you level things up) which limits how much you can play without paying so much.

My favorite part of the game is to no ones’ surprise, the battles. Again, I would have preferred this type of battle system in a mobile game. Especially coming from a game with the Total War name slapped on, you expect a certain something in the battles and Total Wars Battles: Kingdoms doesn’t meet that “certain something.” By itself, though, the combat is fun (for me). There’s strategy involved and you get to take an active part in the battles by using taunts, buffs, choosing targets for your archers, making use of the siege weaponry, etc… The only issue is that it will take you sixteen minutes to heal a completely depleted unit and varying other amounts of time for other units that were harmed. You can pay one gold to instantly heal a unit (or five gold to completely heal all units), but that adds up fast when you consider each battle maybe lasts five minutes long. 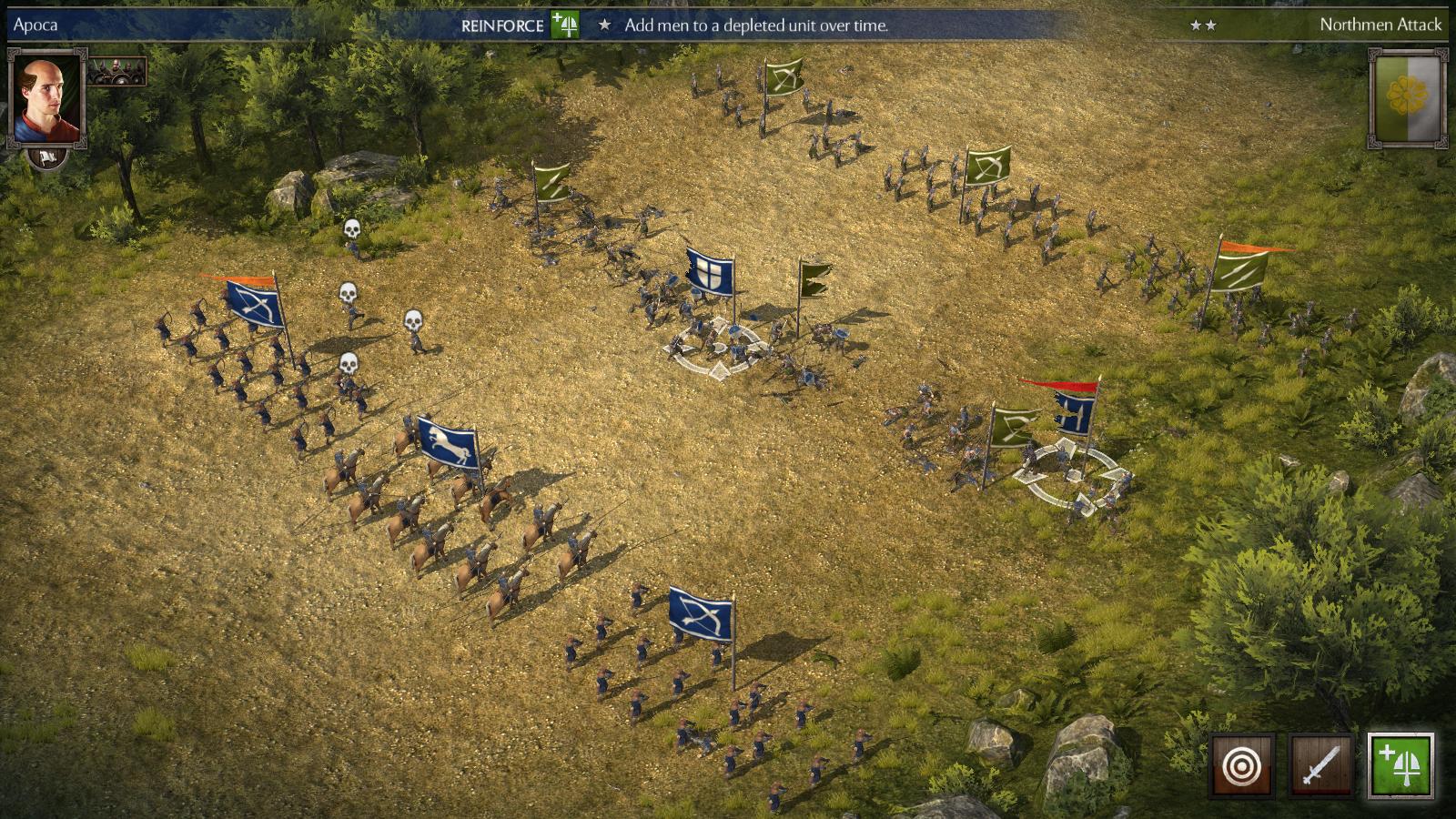 This is what awesome in a turn-based strategy game looks like.

The biggest issue I have with the battle system is how much it relies on gold. You can spend gold to give your units the best equipment so that they have better stats, for example. Before the battle starts, you’re given about twenty seconds to spend three gold for a buff that will give you an advantage in the fight (stuff like shorter buff recharge times or flaming arrows for your archers to do extra damage). And, of course, after the battle you can spend gold to speed along their healing. Battles are why people play Total War games (and I get that this isn’t an ‘official’ Total War game, but it has it in the title and that gives certain expectations), and limiting that with a pay wall or long wait times and a LOT of grinding just doesn’t sit well with me.

This is definitely a game you will be playing for the long-haul. I could perhaps put up with the long wait times if it weren’t for the issues I keep mentioning. Some of the features in this game are great – such as changing seasons. In the Winter, you can hunt for food as you won’t have much luck farming. And it actually is quite neat that when you cut down trees you’ve got to take a while to let them re-grow from various stages. Stuff like this is awesome when it’s not being tainted by cash-grabbing.

If you like the game, you might be annoyed that I keep mentioning the gold. “Why not just pay?” you might ask. Five dollars in this game wont get you far, but it’ll get you somewhere and it only costs about as much as a small meal, right? But the problem is that the gold permeates the whole game – it’s everywhere! Constantly I am hit in the face with “Give more money for this.” It’s like this game was created as a caricature of pay-to-win mobile games. Sure, I can get very tiny amounts of gold from things like gold mines that rarely pop up from my daily tribute, but that doesn’t amount to much. You’re given a handful of gold to start with but that disappears quickly, and you’re left with fifteen + hours of gameplay before things start “getting better.”

Conclusion: Fair (2/5)
While I enjoy the gameplay, I would have definitely preferred the game be buy-to-play than the constant “Give us money!” that is thrown in your face while playing. Battles were fun, but even they were infected with long wait times and/or gold requirements. The city building offered decent amounts of customization and was enjoyable, too. In the end, the game would have been more than amazing if not for the extremely long wait times and gold (cash currency) dependence. Being released on browser or mobile would help a lot, too. The game is free-to-play and on Steam, though, so I encourage you to hop on, play around, and perhaps relate your impressions (in a constructive fashion). Perhaps we can get the developers to change things.

Features: 4/5 – I loved the features available

Customization: 3/5 – Just enough, though (like most of the game) tained with gold requirements

Controls: 5/5 – Spot on and intuitive controls.

Overall: 2/5 – The cash dependence killed it.