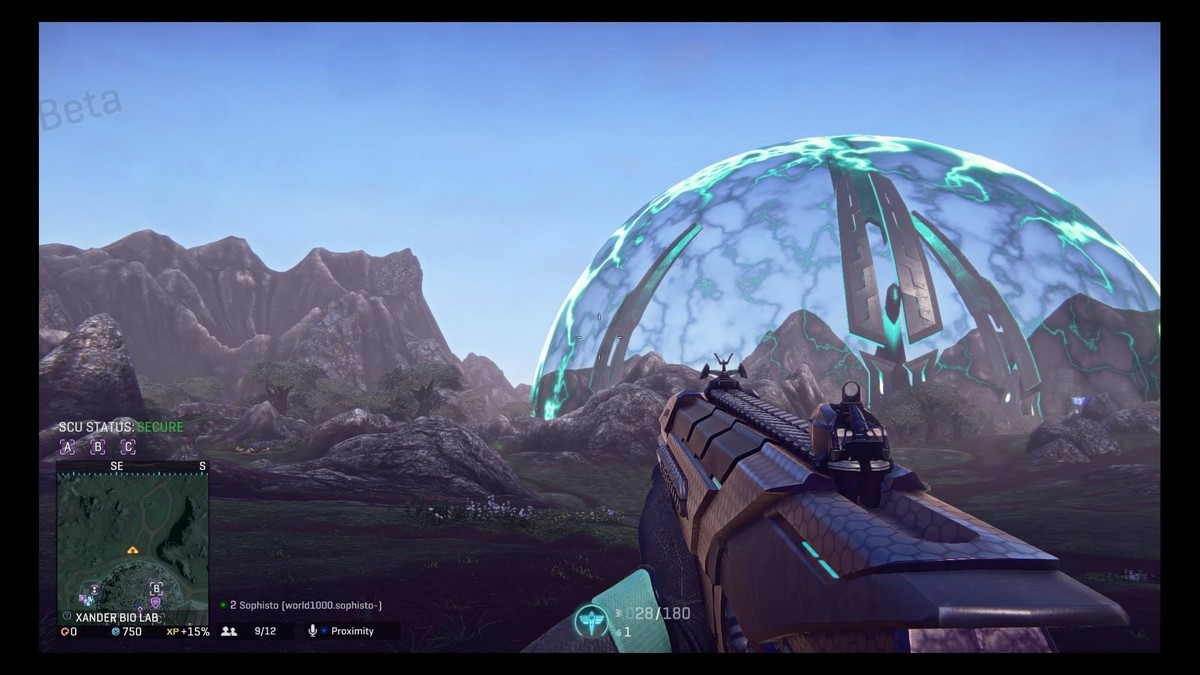 Red Is Not Always The Enemy:

I’d like to take this time to impress upon my audience first that this is definitely closed beta. There are still lots of bugs and kinks to work out, such as me clipping through my entire base and wandering out the other side! Funny though it was, it was not indicative of the product. That is how these things are found out after all. Planetside 2 is a pure PvP game, an MMO where three factions do battle for a planet. Three empires all desperately seeking their own lebrensraum, and it is not a sequel so much as a revision of the original 2003 hit. Unfortunately, it will not feature crossplay between PC and PS4. Planetside 2 is free-to-play with constant PvP action, even if some of the beta has been incredibly quiet.

I did have moments where there were absolutely no one to kill or fight, but when I switched factions there was absolute chaotic insanity! I do not know if perhaps one faction is more popular than the others, or if I was simply in the wrong place at the wrong time, but it was eventful when I found combat. But I did enjoy it ultimately, but there were little things that I found to trying or simply not fun at all; some of the vehicle combat was jarring and non-intuitive. Flying a ship for example is kind of easy, at least to get going but to actually maneuver is considerably more challenging. There are tons of options, and three factions and several classes going here. Between vehicle, awesome guns, and siege anti-air weaponry, Planetside 2 is certainly in a class all its own right now.

What makes Planetside so different is that it has three factions warring instead of two. A constant two faction battle would be boring, and four would be a bit much. But a constant Mexican Stand-off is pretty exciting! If your faction is pressing one territory, the third could be coming up behind on yours, and putting your home at risk.The world is massive, with considerably over 100 total regions in the four continents.While there is no “victory” in that the game will not end, commanding certain contested points on a continent will offer benefits to the side that owns them. 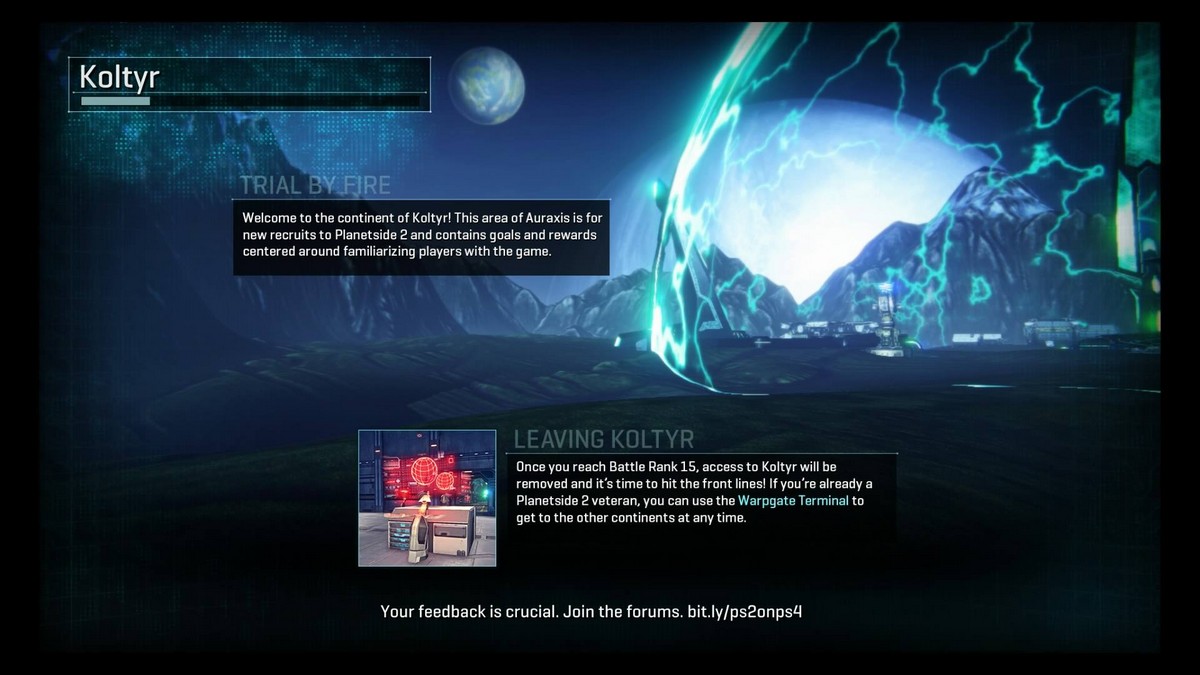 I enjoy that the game keeps going ad-infinitum, so that anytime I come on it could be a new, different game. That’s one of the drawbacks of most shooters; Call of Duty, despite having different matches going all the time, it’s pretty much the same damn game every time you go to play. It’s always the same jerks, the exact same strategy and situations. But in Planetside 2, things are constantly shifting and changing, and that’s a terrific boon to the game. Those familiar with the PC will be able to jump immediately in and have fun doing what they did with a console instead of their PC. And the visuals are quite attractive, and possibly better than the average PC graphics. From what I understand they will be top-notch. I’ve enjoyed them so far, that’s for sure!

I am usually pretty pleased with the shift from PC to Console controls, and this was no exception. The controls for controlling your character and moving/firing are just fine, precisely what I expect from a shooter. I enjoy playing with a controller, but I have to say that vehicle combat left a great deal to be desired. I understand that it’s a beta, and it still could use some tweaking or there might be bugs in the port, but I found the ground vehicles, at least the smaller ones I have had access to, to be very jarring. At least I could change the camera on the ground vehicles so that I could not feel nauseous by simply being on a ATV. 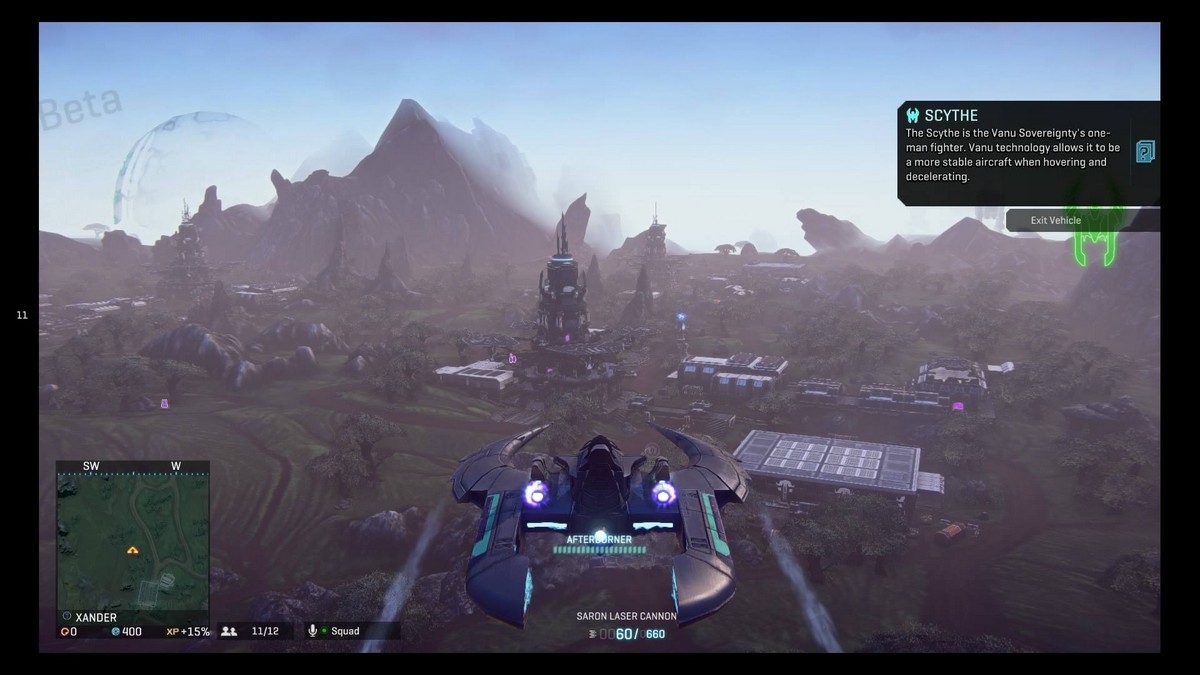 Flying Above the Battle

I often crashed into things, but that simply could be my inability to pilot less than the controls. I did not find I was very skilled in aerial combat, but it is not a requirement and that I am grateful for. But to really experience the game, you need to try it all, no matter how badly you do! With practice, it becomes better. At this writing I can finally fly! But I still prefer to be on the ground, shooting people with my cool rifles. The humongous anti-air cannons on my main base were pretty awesome too, though I found it very difficult to aim and shoot down aircraft, and much easier to bombard soldiers on the ground. It was very gratifying to wield that much power!

Give Me Victory or Give Me Respawn!

All told, I am looking forward to the final release of Planetside 2 on PS4! I’m glad to see an increasing number of enticing PC titles are being sent to the Playstation 4, a powerful console in its own right (and truth be told, my preferred current-gen console, though I harbor no ill-will to the others.) I’m definitely feeling like it will be a popular addition to the Playstation 4’s significant base of free to play games, giving yet another option to their fanbase of this style of game! Not everyone wants to play on PC. Some just want to enjoy the same fantastic games while on a console, and it’s a joy to live in a time where that’s a possibility! And yes, it has a cash shop, but it is not pay-to-win. Purely cosmetic items are for sale, which I’m glad to see. I detest pay-to-win.