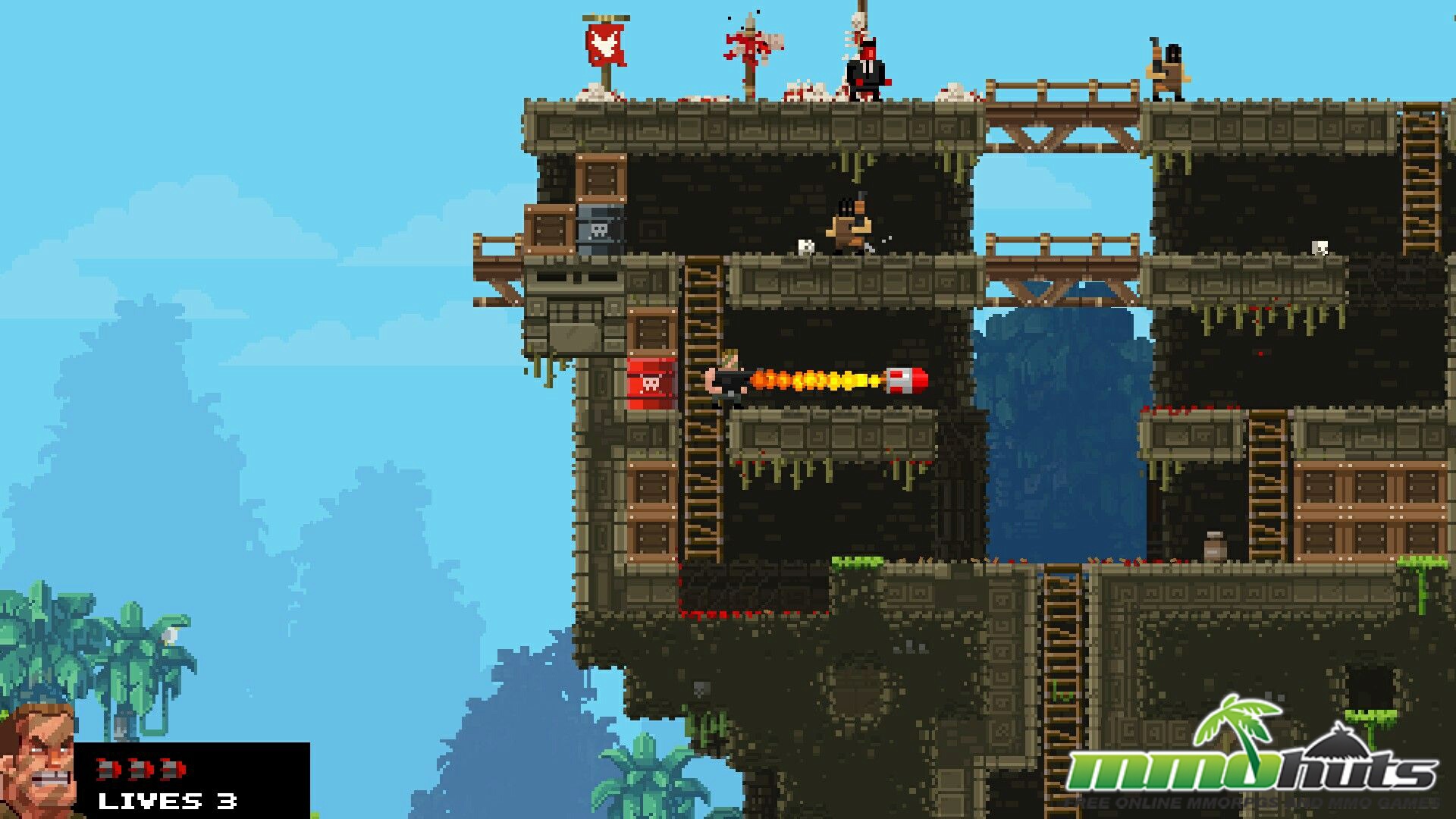 October has been a stellar news month for the world of gaming, but few things stand out more to me than the release of BROFORCE. I was in Early Access from the get go, being incredibly excited about the potential for this 8bit, side scrolling, action explosion-fest. The way I explain it to people who ask, is this: “Broforce is everything that is America. Explosions, action, explosions, FREEDOM.” The story is very simple. There are nations of badguys out there, causing trouble. The Broforce is out to bring freedom, justice, and explosions to those evildoers. Up to four players can go online and play this terrific side scroller, and no matter how many times your squad dies, it will not diminish the fun in anyway. When we streamed it the other night, we died more times than I could conveniently count, and that’s the same every time I play, no matter the difficulty. It might seem that the game is a simple action game, but it’s so much more than that at its core. Broforce has to be seen to be believed and understood; count on a Bottom Tier one-shot that shows off the amazing gameplay coming right alongside this article! 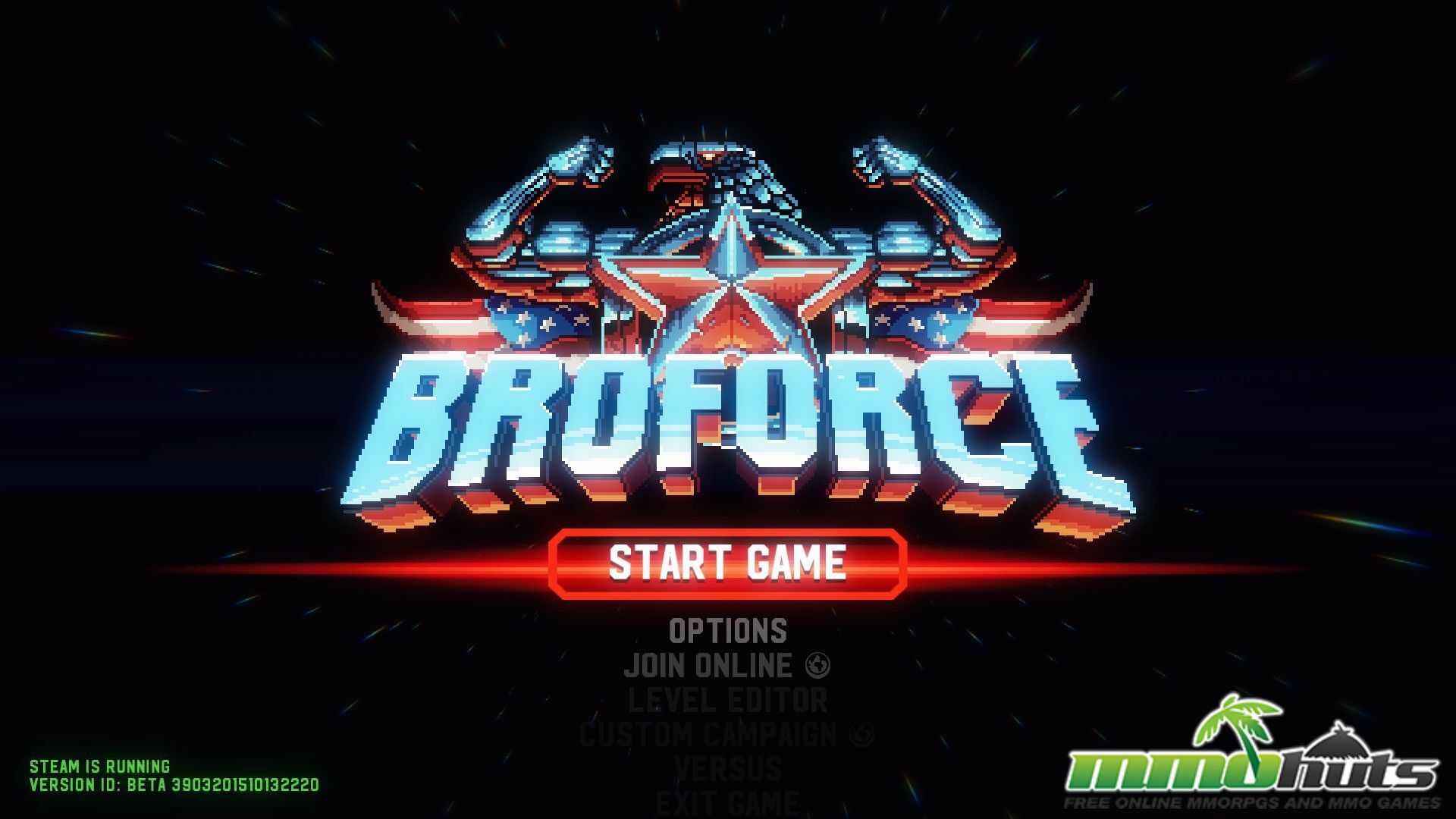 Even the title screen is manly.

Broforce is undeniably fun. You can tackle it more than one way. You can just run straight through a stage solo or with friends, firing wildly at the terrorists/devils, jumping over exploding barrels, bombs, landmines, or falling terrain. Or you can use your melee or guns to shoot and create tunnels or sneak your way around areas. But where’s the fun in that? You’re playing a badass here! You have to defend freedom for the whole world! Think “The Expendables” on a more grand scale (though in August, several of the Expandables characters were added, “The Expendabros”). Instead, you have action heroes from the past, with a different take. Many of the Expendables stars are here in perfect iconic variety. Stallone appears as Rambro, Bromando, and the Brofessional. Cherry Broling (Cherry Darling from the Grindhouse film, Planet Terror), Brochete (Machete), Time Bro, Broniversal Soldier, even the Brocketeer. If you can think of a badass from a film, there’s a good chance they are here! And each one plays differently, has different guns, special abilities and melee skills, such as Brodell Walker, Texas Ranger’s amazing Roundhouse kick. The Brodock Saints play at the same time, and if one dies, you still have the other one to carry on. Kudos to Free Lives to making each character stand on their own and represent their source material!

The game exudes hypermasculinity, but does so in a satirical, comical, self-lampooning fashion. That’s what makes this so terrific: It does not take itself, or anything seriously. But it’s not all fun and games. The constant, nonstop action can make the game impossible to complete if you go too hog-wild. We had several stages where a bridge got blown up in a moment of freedom-fueled passion, forcing us to expend a life jumping to our deaths, just to respawn on the next platform. Virtually everything is destructible, with only a few bricks that are immune to forms of damage. Hell, some of the ground pieces dissolve as soon as you step on them. So while it might be fun to just run and gun, the developers thought it through and force you to think; maybe after a few deaths, you’ll see the need to pace yourself instead of blindly running to the enemy Mooks, guns and bombs ablaze. 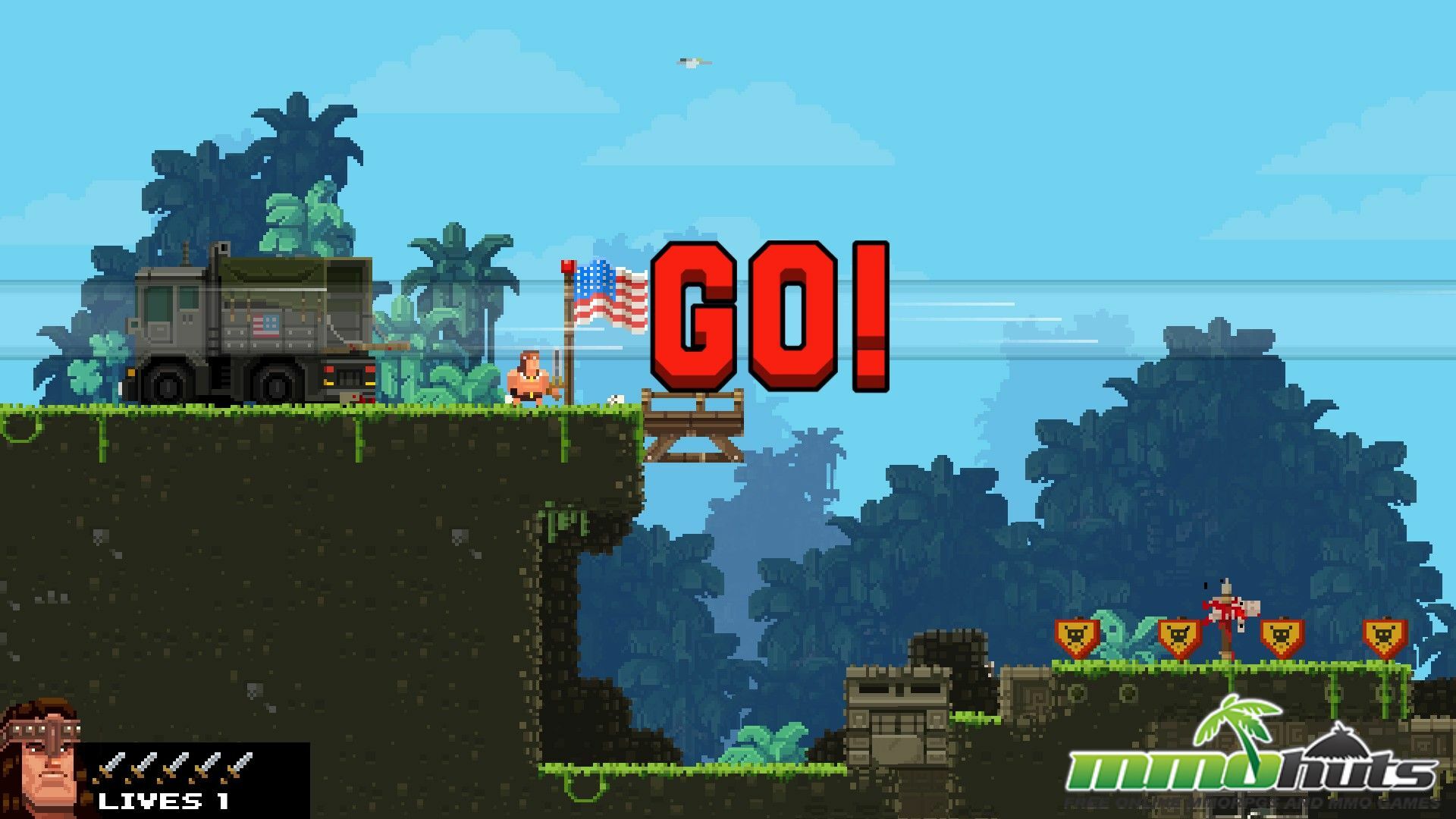 Broman, the Brobarian to the rescue.

You start with a certain amount of Bros unlocked, but littered throughout the stages are bros in cages. Freeing a certain amount will unlock more bros for you to play as. Each stage you start as a random one you have unlocked, and if you free one in a stage, you change again. It’s constant chaos. If you are playing multiplayer, and your friend dies, fear not! If you free a bro, you bring a player back to the game. Teamwork! It’s a key component in freedom.

I also appreciate that it has drop-in drop-out multiplayer, and you can set maximum players/passwords to keep out randoms if you just want to play with your friends. That should be a given in any multiplayer game, but I’m always glad to see it anyway. But if that’s not your bag, there are other challenges and options to go around. You can build your own stages with a considerable amount of tools at your disposal, and submit your friends to the tortures you’ve devised. One of my personal favorites I experienced this summer makes you play as James Brond, and you have to stealth your way through a night time raid on a building, utilizing all of Brond’s four special abilities (Yes, he gets four; a nice variety of skills that befit the Secret Agent). Or if that doesn’t strike your fancy, there’s a single player only Hardcore mode. Each bro can only die once! If you lose them all, it’s Game Over. And this game is pretty hard as it is. You can also play other players’ Custom Campaigns. There is more to this than a simple run and gun. If you don’t want to endure the story, you can play Arcade Mode, and just run from stage to stage, ignoring the endearing, democracy-filled story. 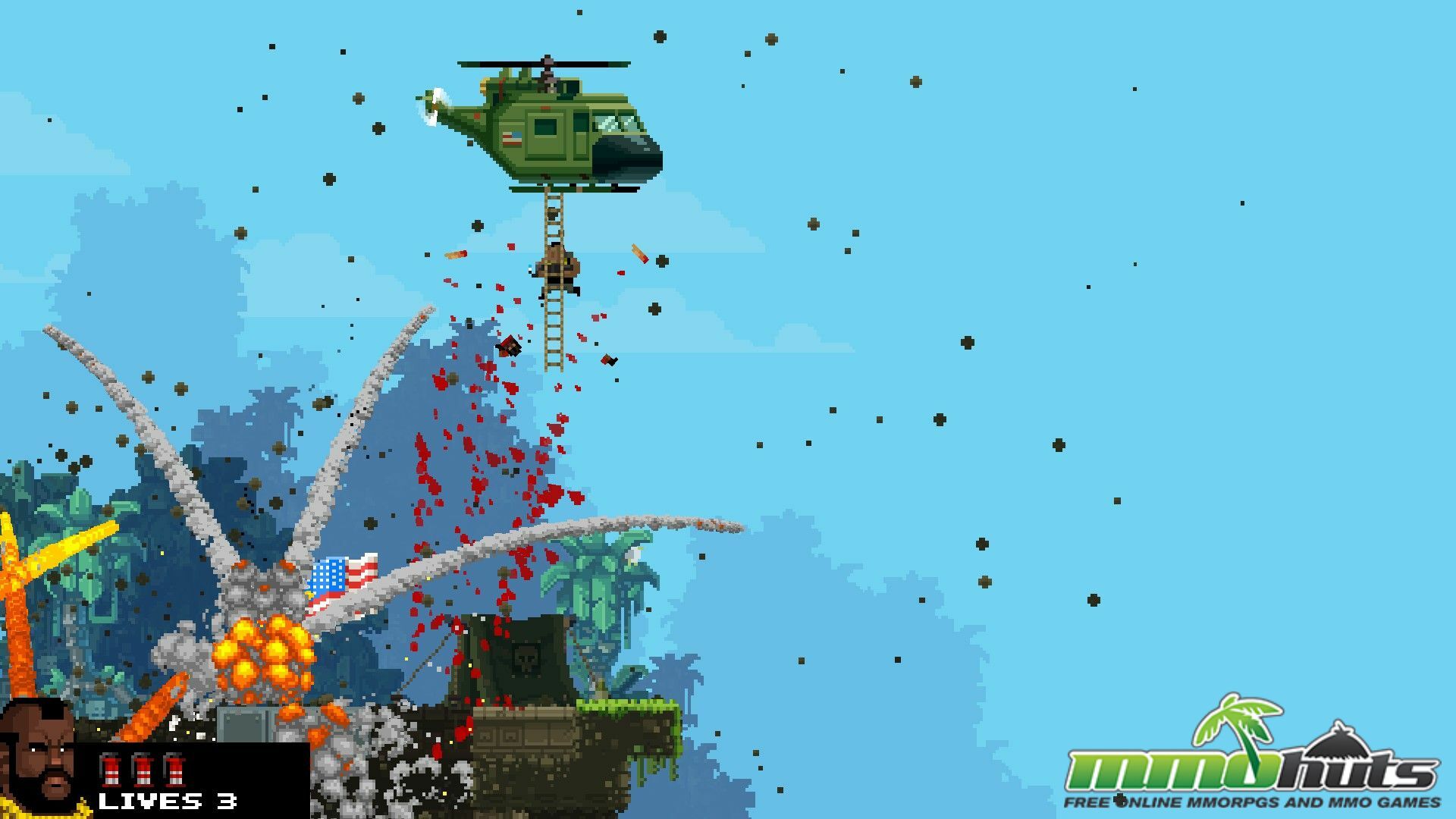 I pity the fool playing a lesser game.

Broforce is a nostalgia fest in the best way. Fun and simple, but it still has depth and clever gameplay in its own special way. You have multiple ways to finish stages, and to go too fast too furious will potentially ruin a mission for you. This game shows you don’t need the most cutting edge graphics and storywriters to make something fun and gripping. Free Lives keeps expanding the game, and I am grateful to them for it. Broforce is an insane tribute to Contra, if Contra were four players and upped the mayhem and intensity by 100%. The multiplayer makes this more than worth the price of admission. The multiplayer fun of this game cannot be understated, and the stage creation’s on-point. Broforce is America. Do you love freedom? Justice? EXPLOSIONS? Let’s bring these guys some Democracy.

The 8bit graphics are perfect for this game. It’s sharp, vivid, and even in the midst of insanity and explosions, the game stands out amongst the many “retro” style games that are on the market, Steam, Console or Mobile. It’s pretty damn gritty for an 8bit game, and does not fall prey to the browns and greys of the majority of shooter games. And when you unlock a new bro, an amazing cutscene shows up with the hypermasculinized version of the Bro visible behind an American Flag. There are lots of cool little touches, such as Broheart (Braveheart) having American colors on his face, and when he utilizes his special, his speech pulls up an American flag and enemies run in terror. It’s the little things.

For the most part, the controls are terrific, sharp, right on the money. I’m a little disappointed that my Xbox One controller does not appear to like the game, but my PS4 controller does. That’s not a downer, because you can use a keyboard if you want, but I’m surprised a Microsoft controller does not work so well on PC. There are little glitches and problems, but the game plays pretty sharp overall.

The music exudes masculinity and machismo. Booming drums, thunderous explosions, and even the start screen with the metallic Bald Eagle, with humongous arms flexing, its screech of freedom, and the rolling drums that begin the game. Even when you are defeated, the “MISSION FAILED!” sound is ominous and manly. The soundtrack kept me pretty enthused; this is one of the rare moments I did not find myself turning the sound down, except when streaming or recording.

The features of the game are all pretty riveting; stage creation, four player co-op with drop in drop out capacity, a solid lengthy campaign, and even enemy behavior is different from Mook to Mook. The game spikes in difficulty on some stages, but it’s not all impossibly difficult, and there are smart ways to work around even the strongest enemies. Free Lives has been diligent in their additions to the game as it comes closer and closer to completion, and I’m certain we’ll keep seeing more. But what they have at launch is all an amazing amount of fun.