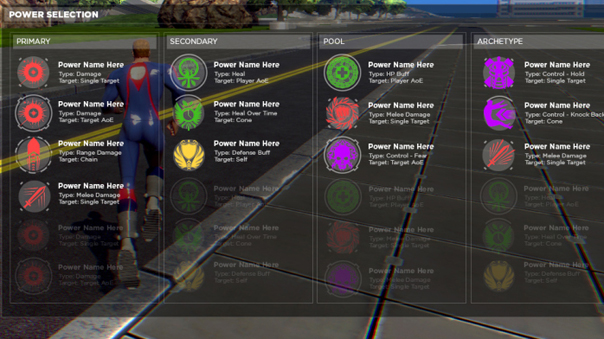 Valiance Online has broken its silence this month with some pretty interesting pre-alpha server updates including a rather colorful character creation set-up, and now a look at the powers that will define your personalized super hero!

Part 1 of their discussion of powers points to a primary/secondary power set system in which players will acquire paths that define their archetype, while building a well-balanced character that acquires a secondary set of skills at a slower rate to balance their overall effectiveness on the battlefield.

Based on the preview, we see melee paths ranging from all out offense, to different tank styles, to full on support leader rolls. Ranged paths on the other hand seem focused on sniping down enemies before they’re seen, fully disabling them, or more standard healer support archetypes.

This is apparently just the tip of the iceberg though, as we won’t understand the full implications of the system until the hybrid power sets or archetype system is fully explained. Check out the full Director Blog here.