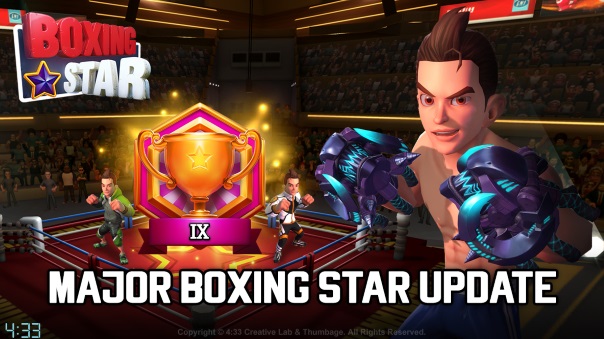 Boxing Star, from FourThirtyThree released a huge update to their mobile game today, and with it comes a lot of changes. The character level cap was expanded to 500, and 12 new skills also came with this update. Boxing Star also features a new multiplayer grade, in League 9. The mode stays the same, players being distributed based on their Star Points, but now players can challenge up to nine leagues instead of the previous eight. Players who hold more than 3800 Star Points can compete in League 9. The story mode was also expanded, up to the 14th area, and exclusive cosmetics are available upon each victory against the area bosses. With this update, 12 new protective gear options, 6 new gloves, and 3 Omega Fusion Gloves are also added to the game.