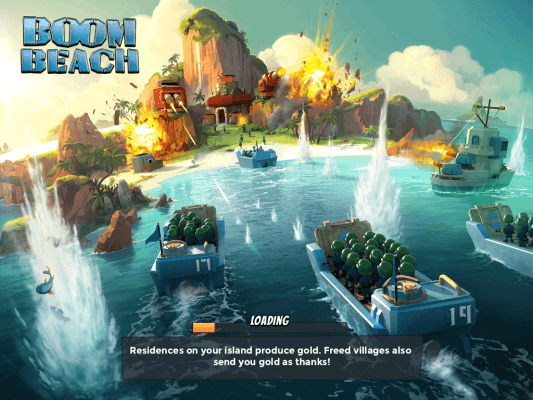 Before I start off this review, I have to apologize if I consistently mention Clash of Clans (CoC), Supercell’s hit game prior to Boom Beach, since the game brings back a lot of CoC elements. I’m not suggesting that Boom Beach is an exact duplicate of CoC; no, no, what I’m saying is that I’m using CoC as a basis on how Supercell improved the Clash of Clans gameplay and that’s why we have Boom Beach.

So with that already squared away, on to the review!

Boom Beach is a simulation-strategy game from Supercell, the company that has brought us the hit medieval sim-strat game, Clash of Clans, and the farming themed game Hay Day. 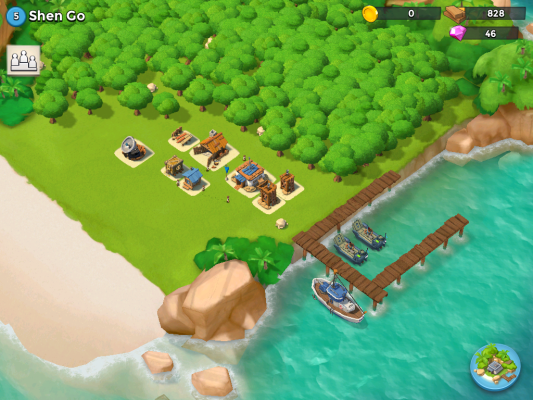 In Boom Beach, you control a military base that’s out to defend the hapless villagers in nearby islands from the Nazi-looking Blackguard. To do this, you will have to create units and use landing boats to “invade” the Blackguard controlled islands and destroy the Blackguard HQ found on each island.

Similar to a lot of sim-strat games, the units you’ll invade with will be coming from the upgraded units you’ll be churning out via the unit creating structures in game. Resources are segregated into two resource types which are gold and wood. Gold and wood output is increased through levelling these structures.

Moving from the resource side of Boom Beach to the combat system, there’s a definite step up from what Clash of Clans had. 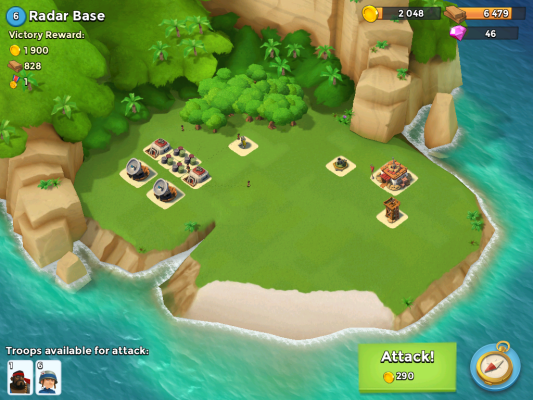 Boom Beach still retains the targeting system from Clash of Clans. However, Supercell added a few features in the Boom Beach combat system that affects the combat’s outcome. First off, aside from the units you’d be deploying to invade the islands, you have a support gunboat in the fringes of the battle map that can provide additional firepower or support to your units in the field.

The gunboat can attack directly, shoot a signal flare, or shoot a healing circle for your units in the field. While the gunboat’s attack and healing abilities are self-explanatory, it’s the gunboat’s signal flare that provides the more interesting feature in the game’s combat system. 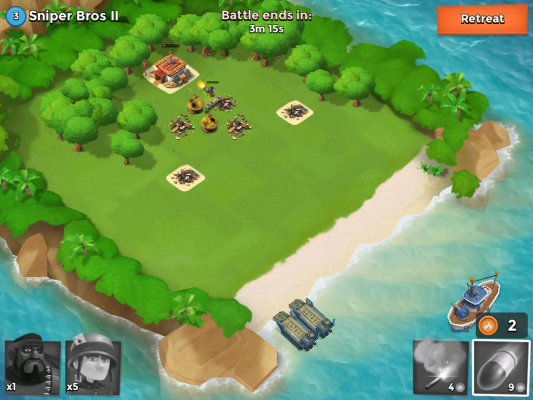 The signal flare provides you the capacity to direct your unit’s targets in the field. The signal flare does have a short duration so you have to actually pay attention in the combat, unlike in Clash of Clans where you just deploy units and forget about them.

These gunboat abilities do come with cost though. Each ability has a starting cost, with the signal flare being the lowest among the bunch and the gunboat attack ability the most expensive. The cost increases every time it’s used. You can replenish your ability pool by destroying structures so you need to also factor that in when attacking.

Another more interesting feature Boom Beach has is its progression system, where you have to slowly peel off the fog of war through payments. As you peel off each area in the FOW, new islands will be opened to you to remove the Blackguards, or you can open up chests that provide you with the game’s premium currency of diamonds. 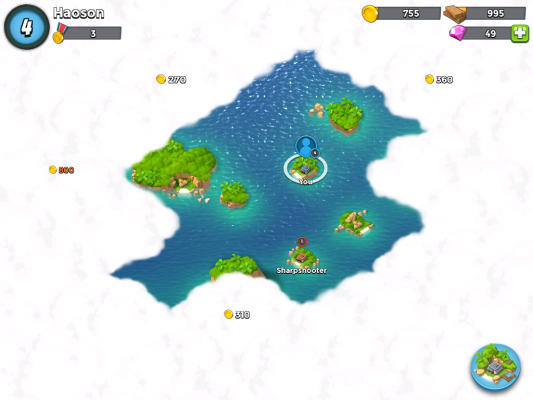 The islands you liberate will be taken back by the Blackguards after a certain time period, so don’t expect them to be enemy free for long (which provides more game replayability.) Removing the FOW will also provide you access to islands occupied by other players. You’ll be able to invade them as well. However, once you’d finished off a player controlled island, the game then shuffles them so you won’t be facing them over and over again. 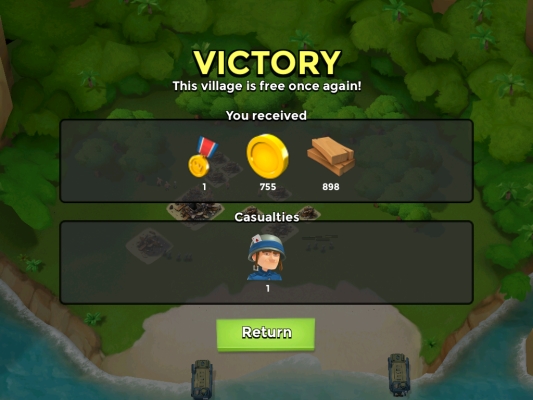 The islands will also provide you with extra gold income after a certain time has elapsed. So there’s definitely good reason for you to liberate the islands you have.

As the saying goes, “If it ain’t broke, don’t fix it,” and it seems that Supercell knew enough to not mess with the formula that made Clash of Clans such a hit. What I loved with Boom Beach is that it’s not a rehash of CoC. Supercell didn’t do the lazy developer’s habit of just reskinning their hits and rebranding it into a “new game.” Boom Beach’s exclusive features are a notch higher in terms of improving the gameplay CoC is famous for, while adding more depth and challenge to the gameplay. 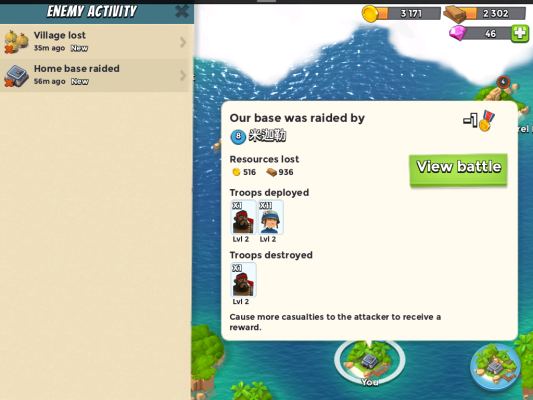 One of the best features I love in Boom Beach is the combat system, which I can peg as an improved battle system of Clash of Clans. Gone were the days where it felt that you just keep on sending units to a brick wall. The addition of on-site battle “controls” makes me feel that I have at least some semblance of control to my units and in fact provides me with a lot more tactical options than what Clash of Clans had. 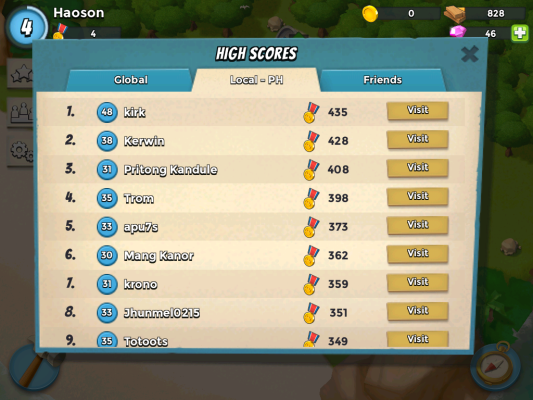 The improved battle system in Boom Beach also pushes you to have more awareness on your base placement compared to Clash of Clans. This is ironic since compared to CoC, the paths in bases are limited to only one straight line. Because of the targeting system in place, you need to figure out the optimal base setup even at the early stages of your base build up. 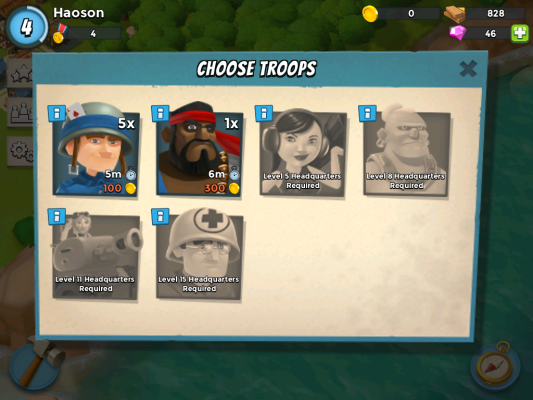 Overall, I’d say that Supercell has a gem with Boom Beach. It’s the “higher evolution” of Supercell’s earlier hit game. If you’ve enjoyed Clash of Clans or if you’re looking for a free game to play and can take tons of boredom at short bursts, Boom Beach is a great game for you.