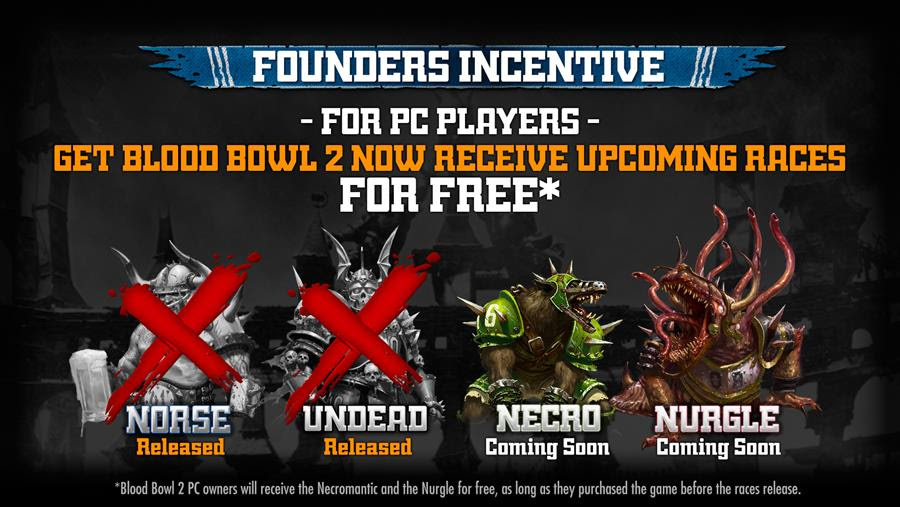 Blood Bowl II marks off the second of their four planned bonus teams today, with the Undead Hordes spilling onto the field hungry for fresh flesh.

Death comes often for Blood Bowl players, and the souls of the most passionate sometimes rise up again to relive the scenes of their former glory. The Undead team, raised by the Liche-lords of the Old World, have the unique skill “Regenerate” which makes them very difficult to kill. They have incredibly agile players, the Ghouls and the Wights, but they are often too fast for their shambling, but fearsome, Mummy teammates to keep up.

Finally, two Star Players are joining the Undead: Ramtut III is a mighty and powerful mummy who has spent countless years on the pitch. Morg n’ Thorg, someone who has faced Ramtut on the pitch and lived, happens to be his sworn nemesis. Vampire Count Luthor Von Drakenborg carries impressive stats and the Hypnotic Gaze ability, and is one of our most fearsome Star Players yet!

But there is a light of hope amidst all this death. Blood Bowl II is currently featured on the Steam Midweek Madness sale for 75% off! Purchase now and you’ll not only receive the Norse and Undead teams for free, but also the soon to be released Nurgle and Necro teams!