Total War: WARHAMMER Call of the Beastmen Out Now 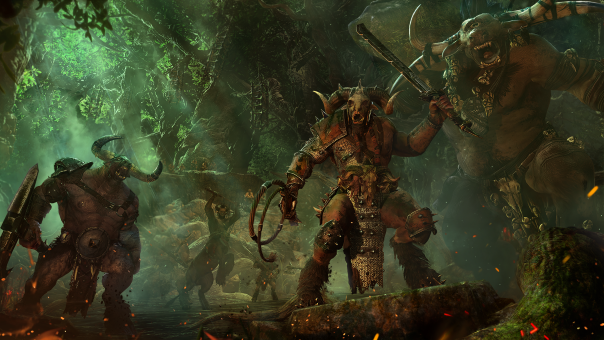 Creative Assembly released Call of the Beastmen DLC Campaign Pack today for Total War: WARHAMMER. The first Campaign Pack introduces the Beastmen as a playable race in the Grand Campaign, custom and multiplayer battles, and in their very own Story Campaign, ‘An Eye for an Eye’. Masters of guerilla warfare, the Beastmen strike hard and fast, ambushing unsuspecting armies and blasting them with chaotic magic from The Lore of The Wild before vanishing into the gloom of the forest.

A Beastmen Grand Campaign may be led by one of two Legendary Lords from Warhammer Fantasy Battles – Khazrak The One Eye or Malagor The Dark Omen, each with their own skill trees, abilities, quest-chains, legendary items and new Grand Campaign start positions. In battle, they field hordes of twisted half-human aberrations such as Centigors, Minotaurs and the colossal Cygor, offering a uniquely swift and stunningly impactful play-style.

As part of Total War: WARHAMMER’s ongoing free content program, Call of the Beastmen also introduces the Amber Wizard hero for all players, regardless of purchase. Wielding the Lore of Beasts, the Amber Wizard can summon wild Manticores into the thick of battle.

Call of the Beastmen is available now for Total War: WARHAMMER on Steam at http://store.steampowered.com/app/404012/