Asura Online tells a tale originating from the famous classic Chinese novel “Journey to the West”. It defines itself in a darker setting and twists from the original. You begin your journey at the Flower Fruit Mountain (Hua Guo Shan), where the monkey king Sun Wukong once lived. One day, you received a Mark on your body which the monkey king once had too. Driven by a sense of destiny, you left your home and set out to explore the world, seeking the reason of the mark’s appearance and its link to the fate of the world.

The stories are unveiled through various cut-scenes with spot-on voice-acting. As you travel around the world, it is not hard to note that the towns, monsters and NPCs’ do make reference to the original novel.

Asura currently offers 6 characters in their public Closed Beta Test, which begins today, November 26th. Each character seems to have different set of weapons and with it different playing style. Furthermore, these characters seem to have originated from “Journey to the West” as well. For example, Monkey resembles Sun Wukong and Goristro is similar to the Bull Demon King.

The characters are all gender-locked and you are unable to customize any features of your character. However, it redeems itself by having distinct visual effects for each armor or weapon equipped by a player. 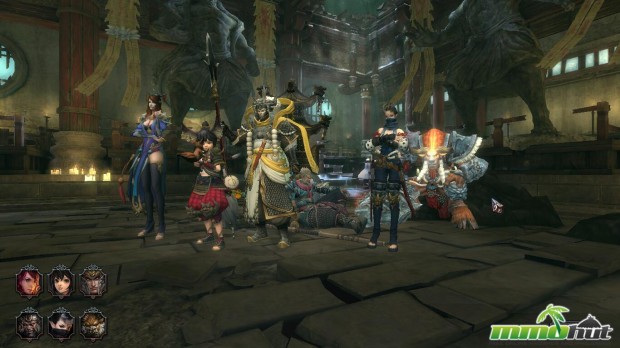 Monkey – Easily distinguished from his appearance that resembles a monkey, he engages enemies with punches and kicks or with a staff. Nimble and powerful, he is a force to be reckoned with.

Exiled God – Wielding a heavy spear or the lance, he charges onto the battlefield and devastates all enemies. He is a potential melee damage dealer.

Goristro – As strong and tough as bulls are, Goristro is able to take a great beating. He is able to act as a shield for the team, and also dish out reasonable amounts of damage. He has two styles which I believe to be life-stealing and using Qigong.

Raksa – Commanding the elements of fire, ice, wind and lightning, Raksa is a caster capable of tremendous damage and can turn the tides of battle with crowd controlling abilities.

Dragonette – Carrying a pair of blades, she uses twin-blades and her assassination skills to take the fight furiously to the enemy. Whether playing the stealth route or quickly rushing towards high priority targets, her nimbleness and luck are enough to overcome all odds.

In Asura, players will mostly be completing quests and grinding on monsters to reach the next level and unlock more content, as are most MMORPG currently. Clearing dungeons is also a major part of the PvE aspect; it is a great way to make progress in the game as well. Quest objectives are clearly highlighted in your User Interface, however they will only show you the way towards them when you click on it.
QTEs, or Quick Time Events, are also common in the game. Players are required to do the needed action shown during the event. These actions are mainly pressing your keyboard or moving your mouse in a certain way. The first QTE players will experience is during the tutorial where you are bound by a monster and you need to break loose from it.
Combat is straight forward, there are targeted skills as well as casting in an area. Combat is very fluid and a refreshing change from standing still and attacking. In Asura, you are able to position yourself and time your attacks as well as change your targets mid-cast. To add a nice touch to the combat, players are also able to dash or roll in battle to avoid skills, projectiles and even environment hazards. However, these actions consume “Stamina,” and if you run out, you will be walking very slowly and unable to attack for some time.

Interactive Environment
This is a pretty interesting feature in Asura. There are multiple instances when players can interact with their surroundings in unique ways. For example, knocking a torch onto the ground can set grasslands on fire and ignite nearby monsters.

Furthermore, the environment also can carry some effect on player skills. An arrow shot through a flame wall will ignite it and turn it into a flame arrow. There are plenty of combinations out there for players to discover and play with.

Physics
You don’t normally see online games with detailed physics engine for objects and characters implemented. Asura does this pretty well; the environment can really get rattled by a hardcore battle. For example, destroying a wooden gate will result in its wooden planks scattering around. These planks don’t just fade away after impact but can be further bumped around by spell effects and other attacks. This is really pushing the boundaries of anything we’ve seen in an MMORPG.
Challenges
In Asura, players can take up daily challenges to complete for rewards. These challenges have varying difficulties and players are able to choose 3 from the list at one time.. New challenges can only be accepted after completing the current 3 they have taken up.
Class-specific Mounts
Yes, that’s right. In Asura, there are mounts that only certain classes can ride on. Some of these can be bought with in-game currency.

Skill System
Asura has an interesting skill system. There are two types of points gained when leveling up, one allows you to learn and level your skills. The other, however, is used to upgrade the skill so it is able to do extra actions, different visuals and more combos. In short it can completely change how a skill functions. Apparently skill resets are free until you reach Lv35.

PvP System
In Asura, the PvP is pretty balanced. Having top-tier gears may not always ensure victory thanks to the active combat system allowing you to react and avoid enemy attacks. For the competitive group there is a PvP Ladder to show off your achievements.

To add on, the clan system you are familiar with in most MMORPG are called “Sects” here. Players in a Sect are able to party up and pit themselves against another party from a different Sect to earn points. There are seasons for these Sect vs Sect ladders, and the number 1 Sect will receive numerous benefits.

Crafting
Crafting plays a big role in getting upgraded equipment in Asura. Do make use of the crafting system as it is the first step to getting geared up for player battles.

Controls
Movements are smooth and actions are played out fluidly. As mentioned in the early sections, there are two control settings – One being the Keyboard mode and the other the normal keyboard and mouse mode. Gameplay experience may differ depending on your control settings.

Asura Online successfully incorporates some of the most fun combat elements in MMORPGs into one solid package. Its gameplay may follow the normal MMORPG tropes, however through its attention to details and extensive features list it really can shine as a player on the 2012 MMORPG stage.

For me, experiencing the Closed Beta Test has been an enjoyable and fun time. Asura is definitely a great game for those who enjoy their games to be packed with action and flashy effects. However, the only problem thrown at me was the lag. I was brutally murdered several times due to the “rubber-band” effect and I realized that latency was a big issue for this game as movement and position are key aspects of Asura. As this game is still in the very early stages of CB testing I’m sure the developers will have time to iron out this issue prior to launch.