The Beta for Astro Lords is really a fantastic thing: in it you play an Astro Lord, controller of a large asteroid, floating through space. This title is an interesting blend of turn-based Strategy, a la Civilization, and Star Wars, with its crazy, fast-paced space combat. Your job is to build a powerful empire on your asteroid, though you can, with the right upgrades, have sub-asteroids to expand your empire – and that is not the only option for you! Even though PVP is a big part of the game, you do not have to necessarily go out and invade other bases. You can spend your time trading supplies, or being a space pirate, stealing from players but never keeping their territory. 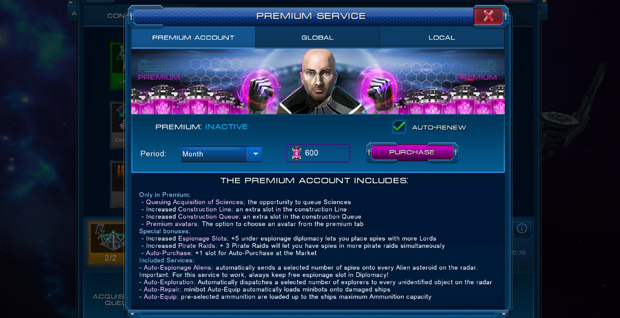 I am always a little leery of games that tout microtransactions, especially in a strategy game: the people spending money have a distinct advantage over the players who just leave the browser up overnight with a queue of upgrades or buildings ready to go. However, I did notice you cannot instantly finish upgrades to your skills or civilization. You can purchase a speed boost, but they do not automatically finish production, which does level the playing field quite a bit. Everyone has to have the obnoxious wait times! It is an intriguing game of spies, rocket barrages, and space piracy; something for everyone, to be sure. You can gain resources via the quests and through combat. Whether you set out to negotiate galactic truces as a diplomat, or just pose as one to steal your enemy’s secrets, there always seems like there’s something to do. Sometimes to the point that it becomes overwhelming. 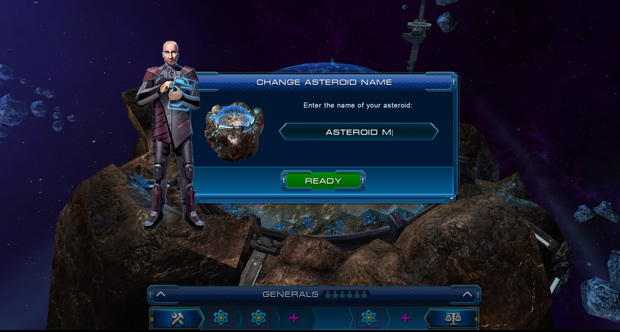 Failure Will Land You In A Pain-Amplifier

In the beginning, you complete a series of quests in the beginner’s cloud, a little nebula where you learn the ropes and the inner workings of the game. As soon as you learn the science for a Flying Asteroid, it leaves and heads into the galaxy, where it floats around alongside other players. You can pan out and view the other bodies near you, and marvel at the beauty that is outer space. That is another thing I really feel is captured well in this game, the majesty that is the stars. But enough of pretty pictures, let’s talk about the features that keep your civilization going. You need power, as without enough power flowing, you cannot have your structures doing their job. This is the Civilization portion of the game. You also need mining and lots of different structures that offer everything from ammunition and bombs, to microbots to help run your spaceships, to cyborgs that study, improve, and spy.

Just building structures is all well and good, but research is another very important aspect. It allows you to have stronger generals; to use extra, outlying secondary asteroids; and much more. There is no “right” way to build your base or research; that is entirely up to you and whatever you feel is most important. Again, some of the research topics can take a very long time, so what I did was leave the browser up, and queue up a great deal of important processes overnight. Then I rushed my research to free up my actual playtime for destroying aliens and flying through space! 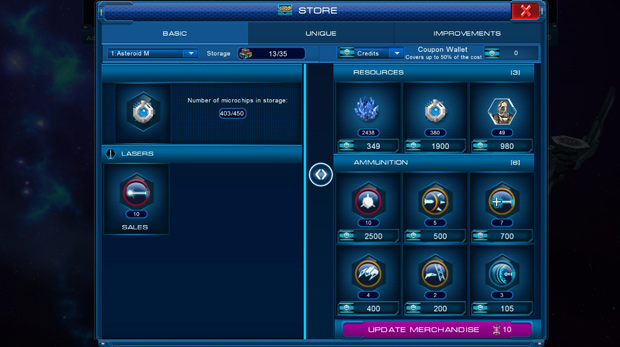 One of the drawbacks to this game is it has what feels like a mountain of different resources. Instead of just gold, metal, and wood, everything has to be scifi themed. Now, bear in mind this is a free-to-play, and as such, there is the option for microtransactions. Deuterium is a resource that can be purchased with real money and is used for “Premium Services,” which include a variety of items you can use to boost your progress in the game. You can use Deuterium to instantly finish construction or purchase items, or invade and pirate with teleportation instead of flight. But you do use real money on it, this cannot be stressed enough. It can certainly make the game a lot more enjoyable, but it is not a necessity at all. The remaining resources function as follows:

Crystal: Extracted at asteroids in the Oort Cloud; it is your fuel for the asteroid and a building material.

Energy: Acquired at Power Plants. This is also used in moving, and powering your buildings on the asteroid. Without enough, buildings do not function.

Microchips: One of the main resources, used in building Minibots. It can be gotten in a variety of ways: purchasing it at the store, from other players, the daily bonus, or battling in the arena.

Minibots: Completing tasks, the Minibot plant, and purchase with in-game currency get you Minibots, which repair vehicles and other tools. Incredibly important!

Ammunition: This kind of speaks for itself. There are a variety of plants that get you ammunition, or you can buy it. You can have too much, however, and if you have overflow, it vanishes; you can however construct storehouses to hold extra currency and resources.

Credits: The most important and primary resource used to purchase most things. There is no limit to how much you can have. Battlefield victories, quest rewards, and fighting near asteroid fields get you credits. You can also place wagers on battles in the arena once you hit a certain point in the game.

Tritium: This is a very rare resource, but incredibly useful. It can be farmed in rare green nebulae, acquired in alien battles and from arena bosses. In auctions, tritium can be used instead of credits, if you’re low. Rare bosses can also give tritium.

Deuterium: Nothing is more valuable than Deuterium. With it you can buy rare, powerful weapons, accelerate crafting, and increase the amount of resources you farm. You can exchange tritium for Deuterium, and certain tasks and events also offer small amounts. 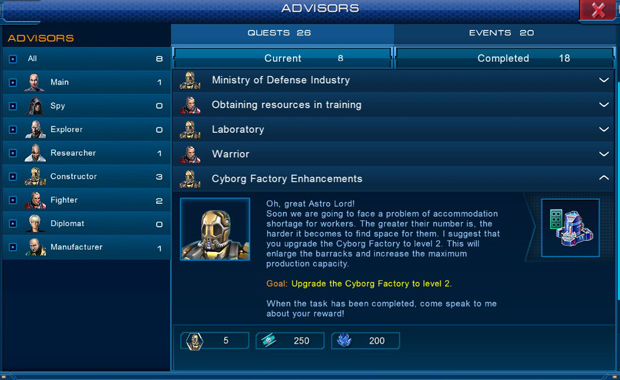 While this does seem like a lot of different resources, and managing it can be a terrible task, it is worth it. Deuterium, Tritium, and Credits are most important but the others are useful and needed as well. The UI is pretty good for telling you what you have and what you don’t, and clicking on certain pieces of the UI will tell you what that resource is good for, ensuring you’re never truly lost in the infinite vastness.

The part of the game that shines the most for me is combat! It is exciting, it’s fast-paced, with a nice wide map with lots of room to maneuver, and resources to collect if you blow up junk floating in space. You control a spaceship, and can be joined by friends on teams to do battle with aliens (AI controlled) or other players in a test of skill and ammunition. There are tons of different ammunitions, bombs, rockets, lasers, and drones that support or assist you in battle. But you can run out, so make sure you have a nice heavy stock before you go into repeated battles. Your ship also has shields, which can be destroyed if you collide with a weak ship. 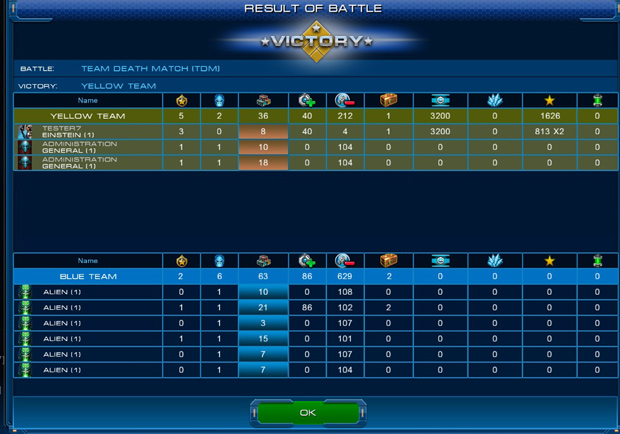 While you start off with a light ship, you can upgrade it with skills. While it takes a while to get them, it is worth it; I look forward to flying around in a destroyer, turning players and aliens into dust. The combat is real-time, but your movement has a recharge timer. Say, you left-click and aim to go south-east. You will fly a certain amount of space, and have to wait a few seconds before you move again. It’s almost fast-paced turn-based strategy. Instead of just actively flying, you have to really consider your movements while anticipating your opponents’. All weapons have their own range and damage, and certain skills and Generals will allow more damage output. Weapons also have recharge times, so be aware of that as well. I have to say, they really outdid themselves, and this, despite me being a strategy junkie, is where I spend most of my time, even if it’s just challenging myself solo against teams of aliens.

Fear Will Keep Them In Line

I love this game; I really do. Again, I am a sucker for a good strategy game, and while I love Sid Meier’s Civilization, the games take forever; absolutely bloody forever. But with this, I can play at my own pace, set some stuff to level and improve while I am working on something else, whether it is in the same room or not. I don’t have to exclusively play this game. It allows me to multitask, which is something I tend to prefer in my gaming. I really feel like this is a browser game that can go places, with the right advertising and with good exposure. I do feel that perhaps some of the leveling for skills is outrageous, but conversely, that is how they keep you there. I can appreciate that.

For a browser game, I really like what I see here. The backdrops are beautiful, and the ships, while mostly fairly small, are detailed, and the weapon fire in space looks so cool. The asteroids themselves are pretty fantastically designed, and I loved how my little “Asteroid M” (I’m an X-Men fan, what can I say?) grew and expanded with more and more structures. It feels like a sci-fi game in the look and feel.

The controls for strategy games do not require very much. Left clicking menu buttons sums it up. However, the space battles in this game require precise controls to work. And tight they are. You use your left mouse to do most of the work here as well, but everything is clearly labeled and set-up in a way that you never have to worry about misclicking the wrong directive.

While I love most of the features that are on offer, I feel perhaps maybe they have incorporated real-money Deuterium into just about every nook and cranny. You can even use it to upgrade your asteroid to a “Premium Elite” Asteroid. It throws off the sense of time flow and any competitive aspect of the game as a result.

I do feel the music drones a little at times, but in space, I can sort of understand that. Conversely, I also enjoy turning off the music in space combat, and just listening to the hover of ships and the sizzle of laser blasts. Perhaps a little more variety in the music would be nice, and I am at least glad they have an option to turn it off if you are leaving the game going while doing other stuff in the foreground. All in all, they have a good thing going here, if they just keep up the hard work.