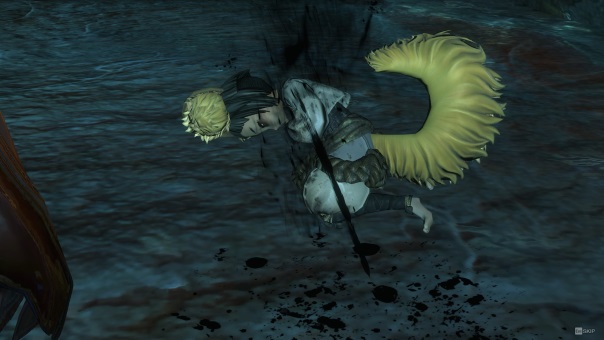 I began this day with another lesson from my diminutive master. I find it curious that most of these training exercises have gotten easier and easier. They used to really frustrate me, but now they’ve eased up. Have I gotten stronger, or is something else amiss? Then I learned that Gwon’s brother is a Blackram Lieutenant, and is coming after Bamboo Village! We have to warn Yigan at Foshi Pyres. In a cave beyond the cages, a gigantic man holds the key, but he is too powerful to tackle outright. Bamboo Guard Chengun was taken captive, and he’s the villages only explosives expert. After freeing him, he conveniently has some sleeping pills to sneak into Wungsam’s food. I’d rather simply shoot him, but we’ll see what happens. “We could write a strongly worded letter. Or… we could blow them up with bombs.” Now that’s what I’m talking about.

Bamboo Guard Ha Jungwang was trapped in a cage, but we set him free. That was his response, and I like how he thinks. How they let him stay caged with a longsword I’ll never know. So I help him free his friends, and find the bomb parts, but somehow, he calls me the slowpoke …Funny way of askin’ for help. The explosions were pretty delightful, huge columns of flame conveniently erupting behind the enemy, trapping them in a battle with me and my allies. They were easily shot down, a satisfying ending for all. Except that a horrific turn has happened at Whalesong Coast though. A plague of undeath has overrun it, and it’s up to me to assist them. I do appreciate that the guards in this world, while they do need help, are not weak. They do kill some of the undead on their own. 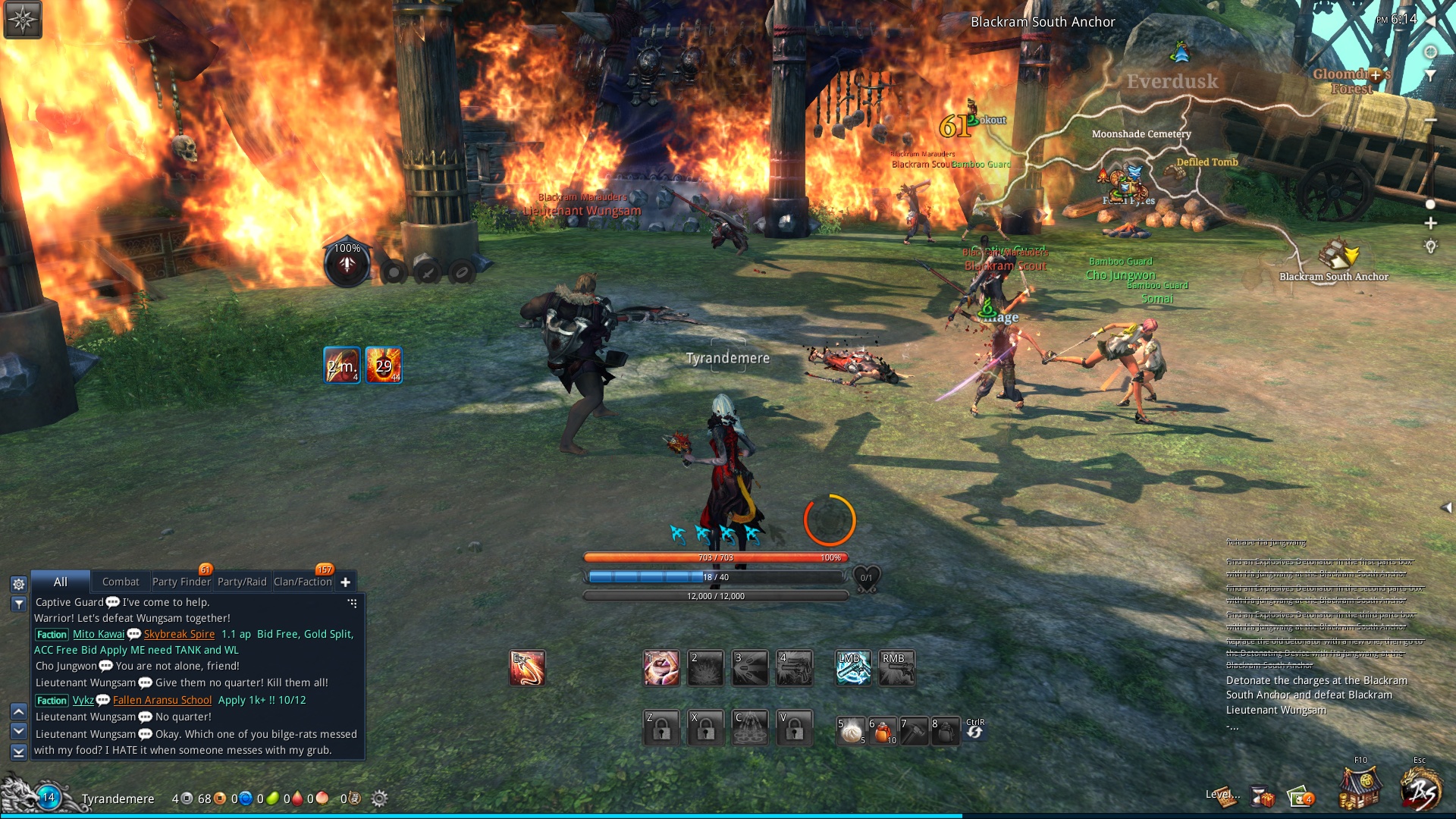 The fire really livened things up, as it were.

The next target is the Lady in Black in the Tainted Grotto. Bizarre creatures await down in this hole, filthy creatures that explode into an ichor when my bullets meet them. It’s Jinsoyun! We were immediately afflicted with Black Rose, stupefied, unable to move. The Corrupted Hulking Cave Augerite was no match, even when it exploded into many smaller creatures. I was given a flamethrower to wield, but it felt inferior to my twin-pistols. Satisfying though. Escorting Dochun out of the Grotto was easy enough of a task. I have to say, Hajoon picks the weirdest places to train. Always some dilapidated building, or mine, or ruins, or dank cave. It’s really unsettling. I should have gone to town first, because I know I’ll have to come back here. This training session was less productive than usual. I learned how to use Firefall, an area-of-effect marksman attack that fires bullets into the air that fall and explode. Useful, but not anything I have not mastered. Dochun has led me here, but I find myself less and less interested in the affairs of the common person. My mastery of the gun has led me to be far more powerful than anything I come across. Detachment has settled in, alongside despair.

I continue on the quest though, out of a sense of pride and duty. I have enjoyed unraveling the story that my life has become, but as I have far outgrown these people, they must learn to work on their own. When I began this adventure, I was doing nothing but spending time with these people and fixing their problems for them. But perhaps that is why I have grown too strong.  Adventuring alone has been enjoyable, but I have yet to party or group with anyone. I haven’t had a need, my ammunition demolishes everything in my path. I did learn that Jinsoyun is responsible for the horrific acts that have occurred in Gloomdross. I feel like the name of this area is … sort of on the nose. This is another gloomy area with a gloomy name. Appropriate, but not altogether subtle. Into the Gloomdross forest, heading to the Dreamdrift.

My next lesson is there, alongside a Corrupted Corpse. Perhaps examining it will give us a lead as to what Jinsoyun has done. Dreamroot Gnarloxes are pitiable creatures. But, they are in the way and must be vanquished. When I examined the corpse, a fiend burst out of it! Easily defeated, but it is certainly a horrific notion. However, this lesson is useful. Concerning Unload. Normally you can only use Unload when Explosive Rounds are in the chamber. But the Firefall skill allows you to use it in conjunction with Unload, even without rounds. You simply use Firefall and immediately Unload. It’s like creating fireworks. Instead of a cacophonous sound and bright lights, it’s heat, fire, and death. 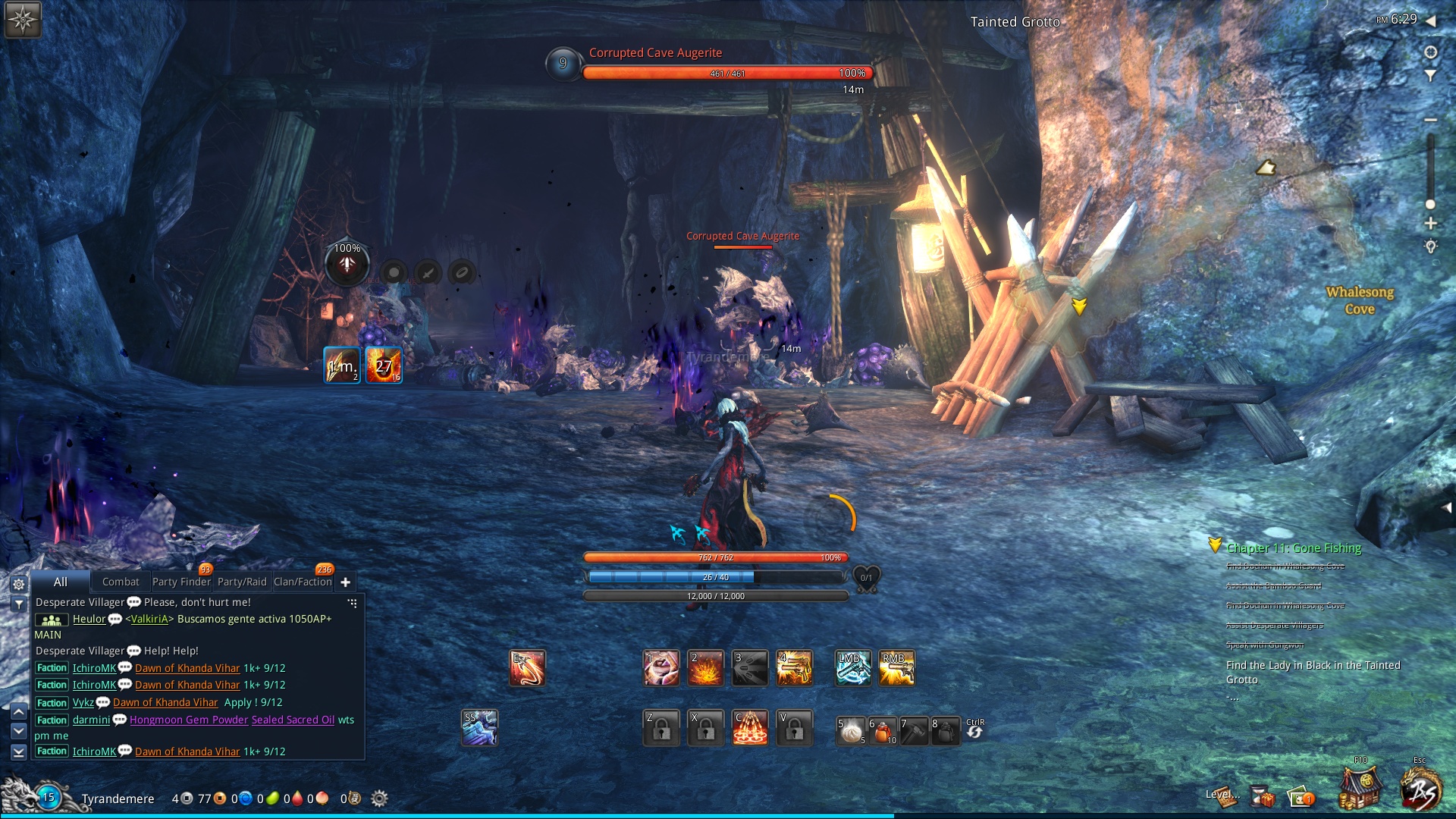 These monsters tried to stall me, but nothing will stop me from getting to Jinsoyun.

I’m given sound advice, in Tanjay Kilns: Stay away from the Lady in Black. But I can’t. She has to be brought to justice. Then I went to speak to Wi Wonhong. Of course, Jinsoyun’s no longer in the area. She’s rumored to have moved on to the Cinderlands desert. Wonhong wants me to wait for his spies to gather data, but Ha Jungwang has other ideas. He wants help learning the secret of refining the Flamegrass, from the Char Coalition. For some reason, they feel he’s “irresponsible” or “crazy”, and shouldn’t be trusted with such incredible firepower. If I just get him some Flamegrass Power (they apparently like me), he’ll put me in contact with someone in Jadestone Village. They’ll know where Jinsoyun is. How? That’s what I’d like to know. Even if they won’t refine it for me, he’ll still put me in contact with them. Because he’s such a “nice guy”. Right…What I found really weird is how arbitrary these training missions seem to be. I received a letter for my next one, not at a level up, but after I picked the Flamegrass. I didn’t even receive exp, just a notice that there’s another letter waiting. Of course, it’s in a foundry, deep underground. That’s where it always is. This is how to use your 1 ability, Revolver, to get up after being knocked down.

Jinsoyun’s reach is infinite, it seems. She has even corrupted and harmed my teacher. They’re dying from Jinosyun’s corruption. It was a gutwrenching experience to watch the little fellow perish, and though we have spent precious little time together, they have taught me so very much. Now I need a new teacher because I am still but a novice. First, however, it’s time to pay our respects. A bit of quiet contemplation is in order. In Pondskip Vale, we learn the valuable ability to run on water (A Kung-Fu film must-have), in lieu of paying respects. That’s probably fine. Oh! Now we go pay our respects. I did note that this area, Pondskip is considerably less gloomy. It’s bright, cheerful, and has an appropriate pond that I practice dashing across. It’s a nice change of pace, and in a way, it has lifted my spirits. We have left the Gloomdross behind, and lost a mentor. But now, we need to focus on a new day as it dawns.  And also revenge. That willd without a doubt happen. Jinsoyun will pay for her transgressions, though it may take a while. It appears I’ll have to pay my respects in battle though. The path led me to a dungeon. That will have to wait, for my next entry.

All told, the action is still quite intense, even though I fear I have outleveled it by quite a large margin. That is why I’ve slowed down and focused on the main quest. In that, I can get back to roughly the same level as the game, or at least as close as possible. The story has taken quite a few twists and turns, and I appreciate the way it has shown me what my class can do without disrupting the flow of the game.