News >
Editorial Articles >
World of Warcraft: Has Blizzard Run Out of Ideas?

World of Warcraft: Has Blizzard Run Out of Ideas? 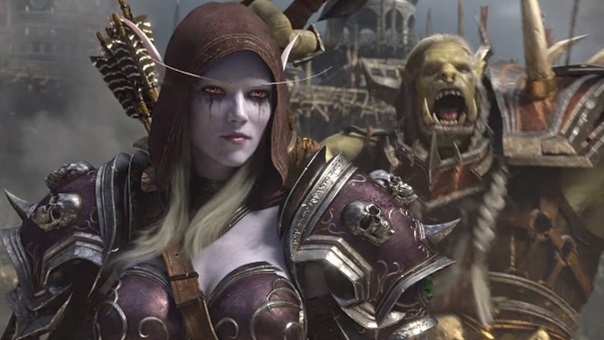 Editor’s Note: Do note that this is just my opinion. You don’t have to like it or agree, but it’s definitely an opinion.

Blizzcon is over. There were some pretty interesting announcements, but I’d be a liar if I said I was excited for even one of them. A new Overwatch hero? Pass. As an aside, she kind of reminds me of Seris, but that’s another piece for another day. The animated short was great, and Blizzard World looks like it will be a fun map. New characters for Heroes of the Storm? Love Alexstraza as a lore character, but I don’t really play much HOTS anymore. Pass again. StarCraft II going sort of free to play? Ehh … that’s sure a thing, all right. But the real meat and potatoes belongs to World of Warcraft, and their two erm, titanic announcements. The first one: Classic/Vanilla servers. I don’t really get the allure. Like many players, I played early in Vanilla (when I was hitting level 60, the end-game content wasn’t even AQ or Molten Core yet) and it was insanity. Nothing about the game was easy. You unlocked mounts at level 40 for 100g. I got my mount at level 51. Everything in the world could kill you without trying. There were lots of hidden things in the world, like alternate Polymorphs (well one) for Mages, every class had fun quests to undertake. You could completely miss skills if you didn’t do these! If you wanted to brew Flasks as an Alchemist, you had places you could go and neither were all that fun/easy to get to. You had no easy way to make a party. You had to … actually look for people! Using a channel, or the forums! It was madness! And all I ever heard was that there’d never, eeeeeeeevvverrrrr be a Vanilla Server. Again! Time and again, Blizzard shut down Vanilla servers as they found them, and that’s their prerogative. It’s their IP, and if they want to shut people down, that’s totally up to them. I’m not upset about that. 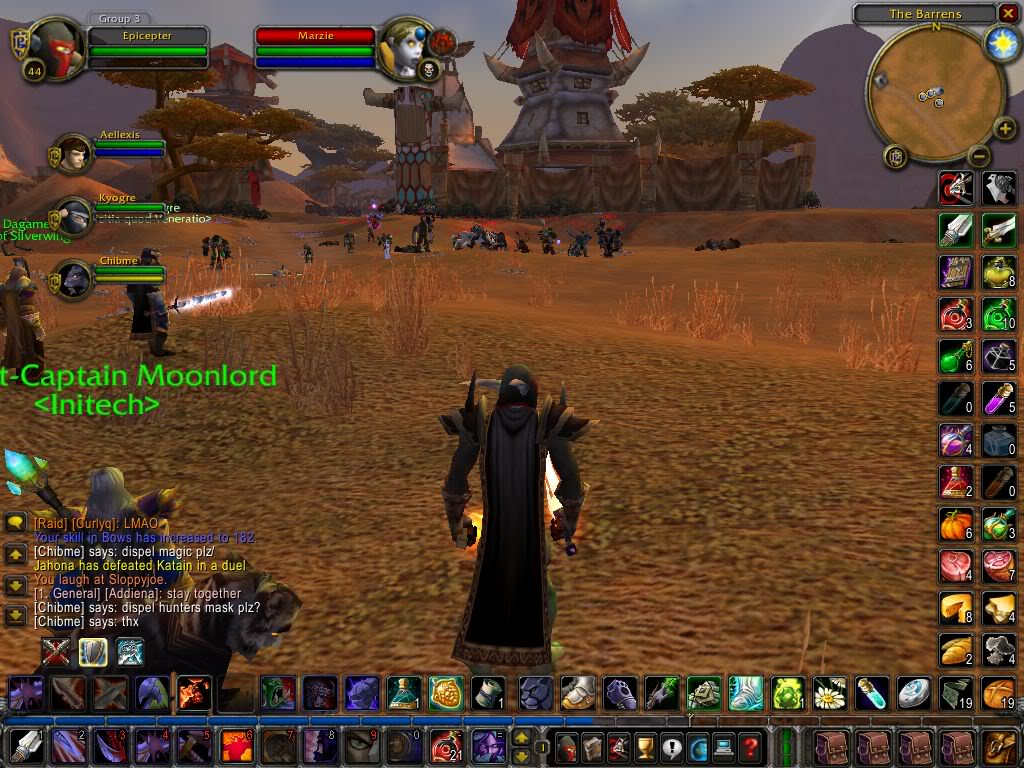 I just don’t understand why it’s even happening now. It’s something that was relevant several years ago, and I feel like Blizzard might be behind the curve. And I know, it’s not as easy as it sounds. You don’t just click a few buttons and a Vanilla server is born. There’s a lot of code, time and work that goes into stuff like that and I understand (as well as I can without coding experience). To their credit, it’s also supposed to have the modern graphical look, to appeal to new players surely. If new players had to play Vanilla WoW, with the Vanilla look? I can’t see it going over. If you thought Classic World of Warcraft looked good and still think that? Well … it doesn’t. Beauty is in the eye of the beholder and all, but it’s ugly. It’s very ugly. I appreciate that, but it’s not genuine. It’s not really vanilla unless it’s also ugly as sin. Do I think it’s going to be popular? At first, sure. I think it’ll have tons of people, thousands of people running to relive the “old days”. I can’t see it lasting beyond this expansion though. I have this sneaking suspicion that it will flop after a few years, and Blizzard will just say, “I told you so! It was a failure”! But I hope not. I know this seems pretty cynical, but I hope it is a success. I do not think it will be in the long-term, but I’d like it to. If fans have fun, that’s really all that matters. But I do have a few questions and concerns:

1. Cost: Sure, I’d give them a try. It’s only fair. But will it be an extra cost in my subscription? Will it be free if you sub to World of Warcraft?

2. Heirloom/Bound-to-Account Items: Is this the same account as my regular account? Will my awesome heirloom mounts/gear be available? Probably not, because this is “vanilla”.  But it’s a curiousity.

3. The Economy: What, in general, will the economy be like? Gold was incredibly sparse back in those days. Will that be the same? I know they are bringing the current graphics over, but what about the gold flow?

4. Quality-of-Life: Will your mounts leave when you hit the water? What about Respeccing? That was an absolute nightmare in Vanilla. By the end, I think my respecs were close to 50-100gold a pop, and even Mages had to do it. Which version of the talents/talent system will be in the game? More specific, which Vanilla talents? Things changed a bit. Will Tauren have mounts? (Probably, but that was ridiculous).

But hey! There’s a new World of Warcraft expansion coming! Let me see real quick what it’s about … Okay … We’re back from Outer Space, we defeat Evil Space God, what are we doing next? Back to old-school fantasy racism and PVP? Excellent! Wait, what? Sure, Warcraft has always been about “Orcs vs. Humans”. I feel like it ties in neatly with Vanilla WoW, and maybe even with a remake/remaster of Warcraft 1 2 or 3 (wishful thinking on my end). But, how do we go from “Defeating God in Space” to “Territorial Squabbling … again”? A friend and I were talking about this and he is 100% convinced it’s a ploy, that we’re going to be seeking out and defeating the Old Gods. Because though we’ve defeated C’thun, Yogg’Saron, and … Y’Sarrj I think? We’ve fought a few, but none are dead. He thinks that this whole “old school back to fighting each other” schtick is just a lead-up to something greater. But I’m not so sure. It just feels like a PVP expansion so far. You’d think that they’d throw us a bone to get us excited. Though every WoW fan I know is hyped to get back to this old-school style of fighting for dominance. I don’t know, I’m just not there yet. I’ve been a fan of Blizzard since Warcraft: Orcs and Humans. I used to play it at a friends house pretty frequently. 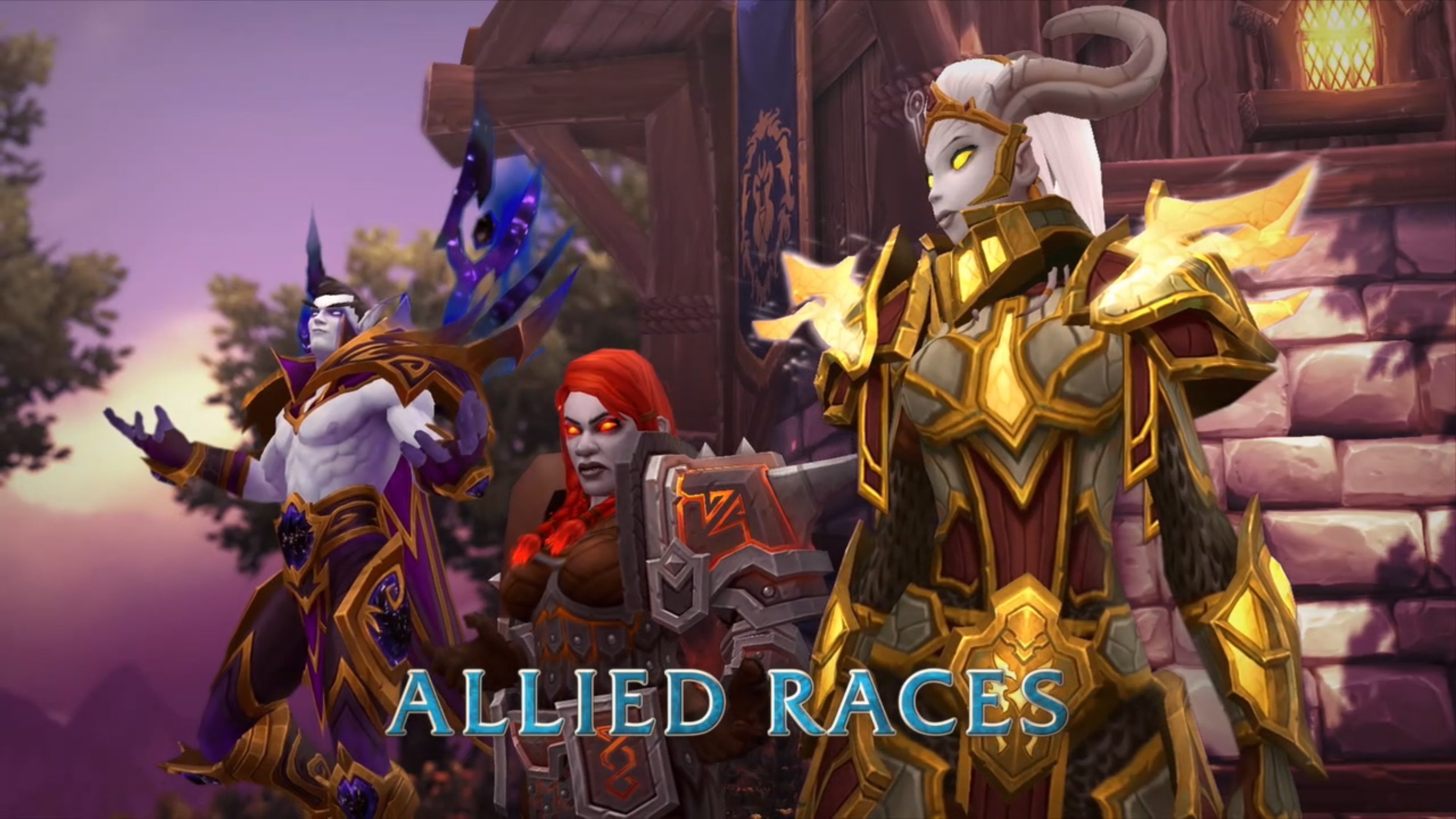 These are some the new looks you can be excited for!

But you know, I just worry that if this expansion’s just about the old Orcs vs. Humans thing, that it’s just to hype up Vanilla servers and there isn’t a real “goal”. Because one side can’t really beat the other, that just won’t work. Do you know how many players would be furious if the Human Alliance were destroyed, and all that remained at the end of the canon were the Orcs and their allies (or vice versa)? So I feel like much in the same way there must always be a Lich King, there must be A Supernatural Force for everyone to battle with. Even if they’re racing to see who beats it first, there always seems to be a threat from the outside. Kael’thas, Kel’thuzad, The Lich King, et cetera. I suppose I’m just expecting more and so far, I don’t have it. But hey, Sub-Races! That’s kind of a cool concept. Except … VOID ELVES!? ARE YOU ABSOLUTELY BLOODY SERIOUS? I was on board for the Zandalari, and the Dark Iron Dwarves. Those are amazing choices. Even the Nightborne and Light-Forged Draenei are pretty interesting, though I feel like that’s pushing a very generic line. But VOID ELVES? Is that the best we can do with such a massive creative budget? Is that the best name? Blah!

At the end of the day, I suppose I’m just waiting for the other shoe to drop, so we can see what the real aim of this expansion is. I love a lot of their content and have been a big fan for years. But so far, I’m not excited. There’s still plenty of time though! Do you have any thoughts on what the Big Bad might be? Let me know in the comments section!