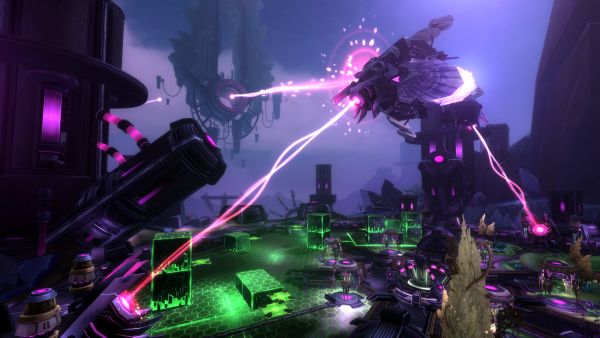 NCSoft and Carbine Studios has just released their latest update for their Sci-Fi/Fantasy MMORPG Wildstar called “The Mystery of Genesis Prime” (Previously known as Drop 3). This new update was created as part of the new quarter update schedule for players new and old with the The Defile and OMNICore-1, but will also include some highly anticipated improvements to WildStar as well.

With the introduction of The Defile, there’s even more exciting places for players to explore, Achievements to achieve, and Path missions to complete, and lots of solo content to keep the lone wolf players happy.

There’s some notable improvements to the Runecrafting system that will make gear gathering less RNG based and make drops much more rewarding.

Additionally, new players will appreciate the new Weakened Runes, which is a new rune type that’s more attractive (and affordable) for players during their leveling phase.

New Quality-of-Life changes have been added, including rented mount vendors that have been added to Algoroc, Celestion, Deradune and Ellevar. These vendors will provide an inexpensive and temporary license that will allow players the use of a mount for 24 hours.

In A Class All Your Own

With this patch, all PvP ratings have been reset, and we’ve reduced the penalty for losses in rated matches. Players who reached a personal rating around the top 1% of all players in their region/bracket prior to the reset will receive a unique title for both Rated Arenas and Battlegrounds. On the Warplot side of things, we’ve reduced the size of 40 vs. 40 matches down to 30 vs. 30.

And so much more.