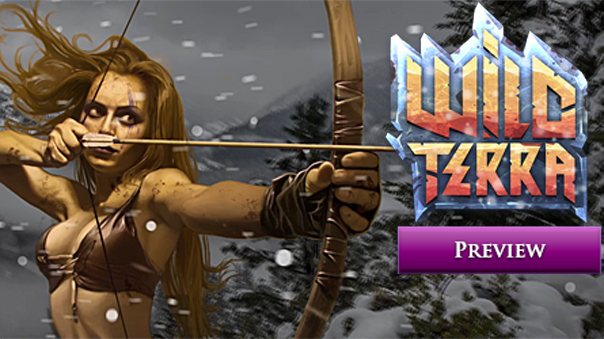 Wild Terra is an up-and-coming sandbox MMO that features in-depth sandbox features and free-for-all PVP. It’s created in a similar vein as Ultima Online and Wurm Online; there are a ton of things for you to craft, important resources to fight over, and villages to construct with friends. If you enjoy the premises of games such as Ultima, Albion, Wurm, Mortal, etc… you’ll probably find some enjoyment from Wild Terra. I’ve been keeping an eye on the game for quite some time, and today I’ll give you a sort of Current State of Affairs on it.

The game still looks just about the same as it did several months ago. It has a realistic style, which is something hard to pull off in 2D games. When a 2D game tries to go for realistic, all too often everything feels cluttered. The artists of Wild Terra have managed to get past this, though, and the game has a nice open feel. This is in no small part to the UI artist. The game is still in what could be considered an alpha state and there may be changes, but so far the UI feels quite nice. 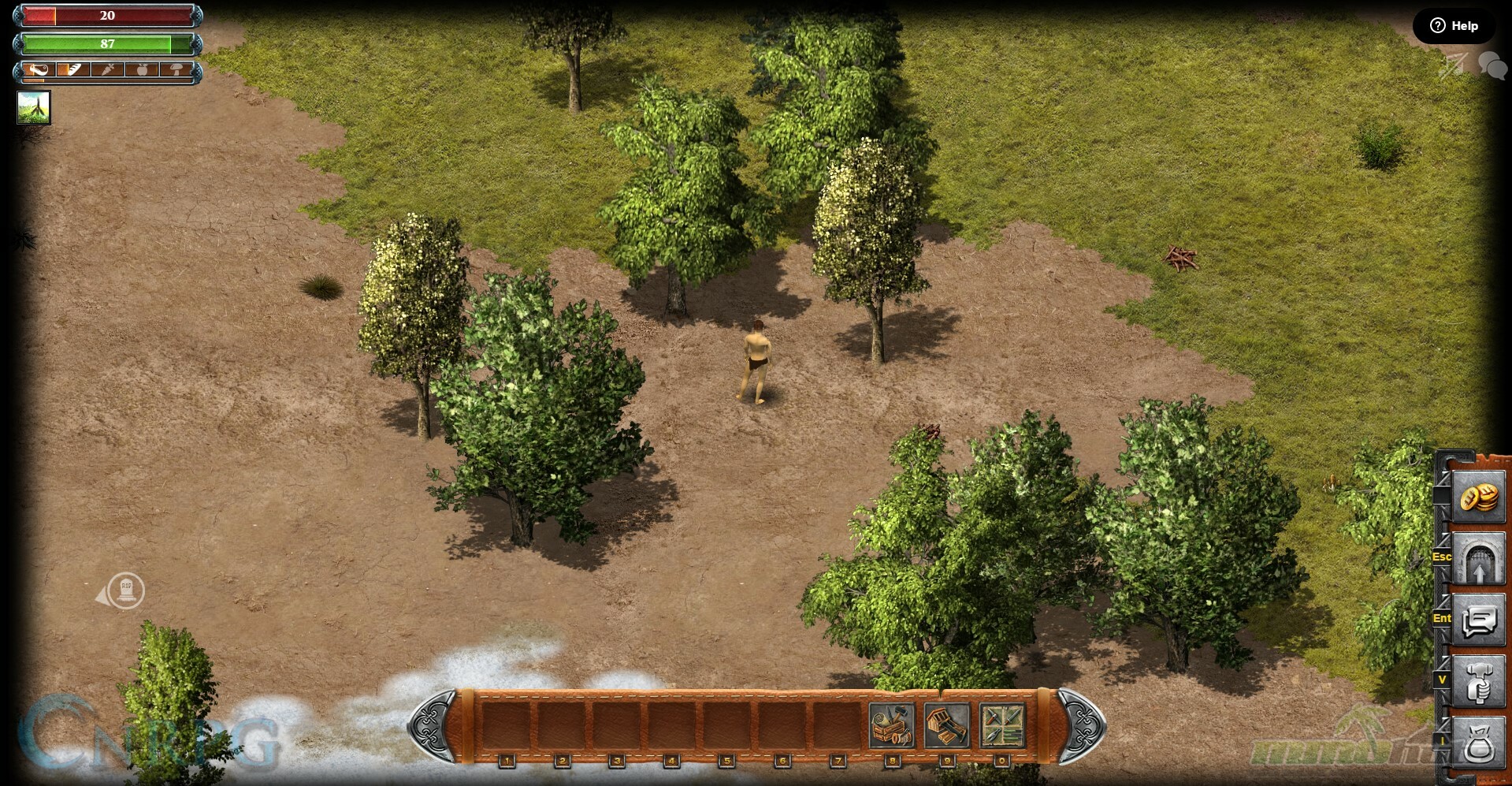 Beautiful for a 2D game. I've found myself more partial to cartoony 2D graphics lately, so it's nice to find a 2D game with a realistic style that I can find impressive.

Crafting is the most important feature in this game. That’s right, not the open PVP, not the village system, not the fighting. The crafting. Everything in this game requires it. If you want to create a village or just a small hut in the woods to call your own, you’ll have to craft for it. If you want to fight, you’ll have to get your armor and weapons by crafting, or do some kind of crafting in exchange for them by someone else. 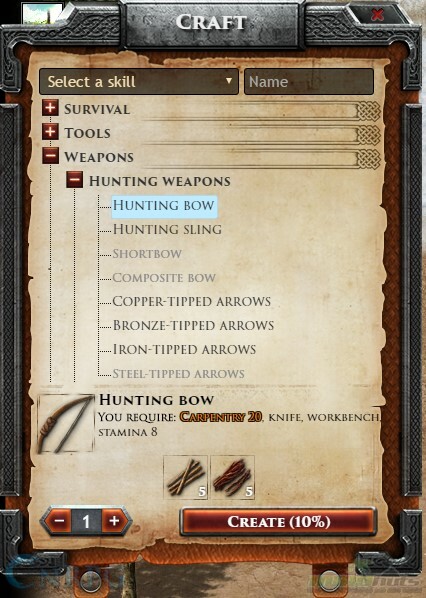 I love games that emphasize crafting.

Gathering plays a huge part in the game. Early on, a lot of the materials you need can be gathered from simple resource piles that can be found all over the map. Piles of rocks or sticks, for example. Later on, you’ll have to craft tools to begin getting to the more difficult resources that require mining or chopping trees. It’s continuous like that, gathering resources to craft better tools so you can gather more important and rare resources so you can make even better tools. It’s all a means to an end, which is to create better weapons and armor so you can better protect yourself while ensuring the other guy can’t do the same.

And this brings me to my two major worries about the game. First and foremost, the game is currently buy-to-play, and I’m not sure which way the game will go at full release. However, right now the buy-to-play means that the game population is quite small. I’m lucky to find more than twenty on a server whenever I play (Admittedly the game doesn’t have much of a North American population yet… but I often play at 3-5AM CST North American time). I’m afraid it will stay this way if they keep the pay barrier, but I also feel that the nature of the game requires it or there will be too many trolls and griefers for the actual players to handle. 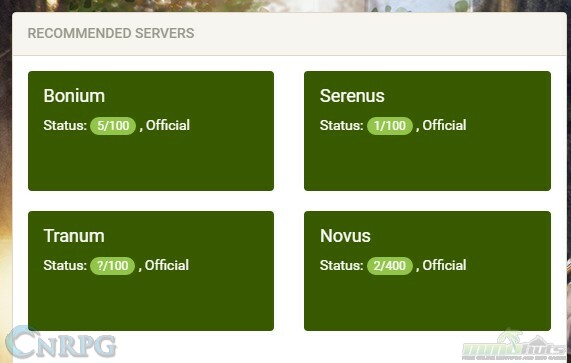 Sad, as the game is incredible.

The second major worry is the cash shop. Right now it’s not too bad. It’s a mixture of cosmetics and convenience. It’s the convenience portion that worries me. You can buy crafting recipes, which you normally have to work hard in the game to unlock. The current iteration doesn’t offer a real advantage to anyone who purchases from the cash shop, but I’m afraid that in the future the temptation will be too great for the devs, and because players will be used to the cash shop offering recipes, they won’t make much of an outcry if they (the devs) do take it too far. 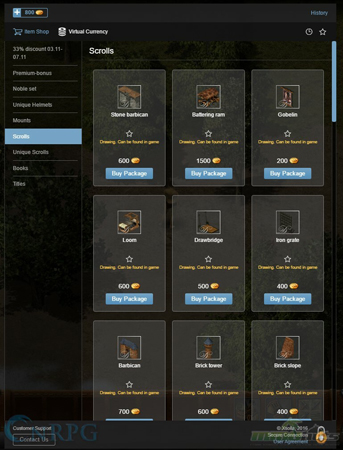 Which reminds me, this game promotes similar communities to what can be found in Wurm Online, where you are close-knit and share just about everything (sometimes even accounts). I love it when a game can produce this sort of communities. This is largely due to an absence in an actual monetary system in the game. In comparison, a sandbox game like Mortal, which has a currency and NPC vendors, has a largely ‘selfish’ community. Even within the same guild, it can often times be like pulling teeth to get someone to give you something for free in that game. And to contrast that, Wurm also has a monetary system, but it isn’t as important (for most players) as the one in Mortal Online and most communities in that game are very open and giving.

Build Your Own Village

Despite the focus on crafting, probably the most interesting feature is the ability to claim land and build within it. You can build without claiming land, but that will essentially result in your home and belongings being available to anyone that pleases to take them. At least with a land claim, you can enjoy some semblance of safety for your things. And if you eventually find like-minded people to join with you, you can expand your land claim through effort and turn it into a village. 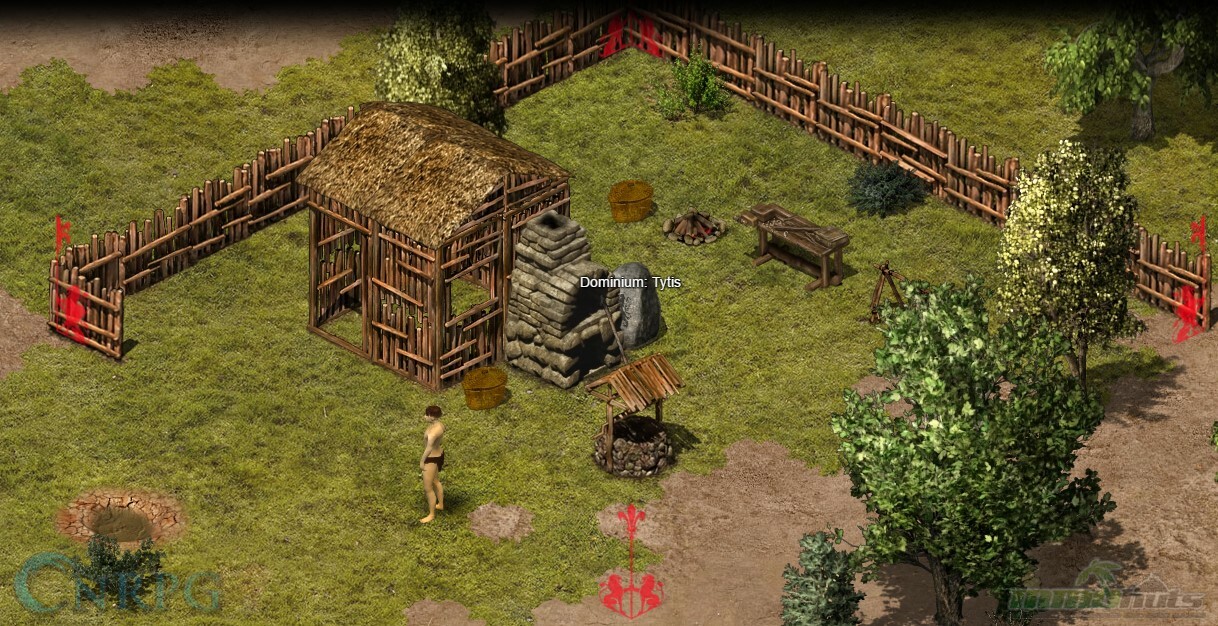 Notice the red corner markers. The stone in the middle is the claim token. Claims are known as Dominium.

Progressing through the various sizes of land claims can take a lot of effort, but the results are fairly stunning. I’m continually impressed by the massive palisade walls and intricate villages I come across in my travels across the map. Unfortunately, I don’t have the time to commit to feel comfortable joining with one of these villages, so I’ve only ever been able to look in from the outside. Each building in these protected villages serve a purpose, allow for greater storage and safety for your things, offer the ability to craft more advanced recipes, and are a place to respawn when you die (most likely from PvP). 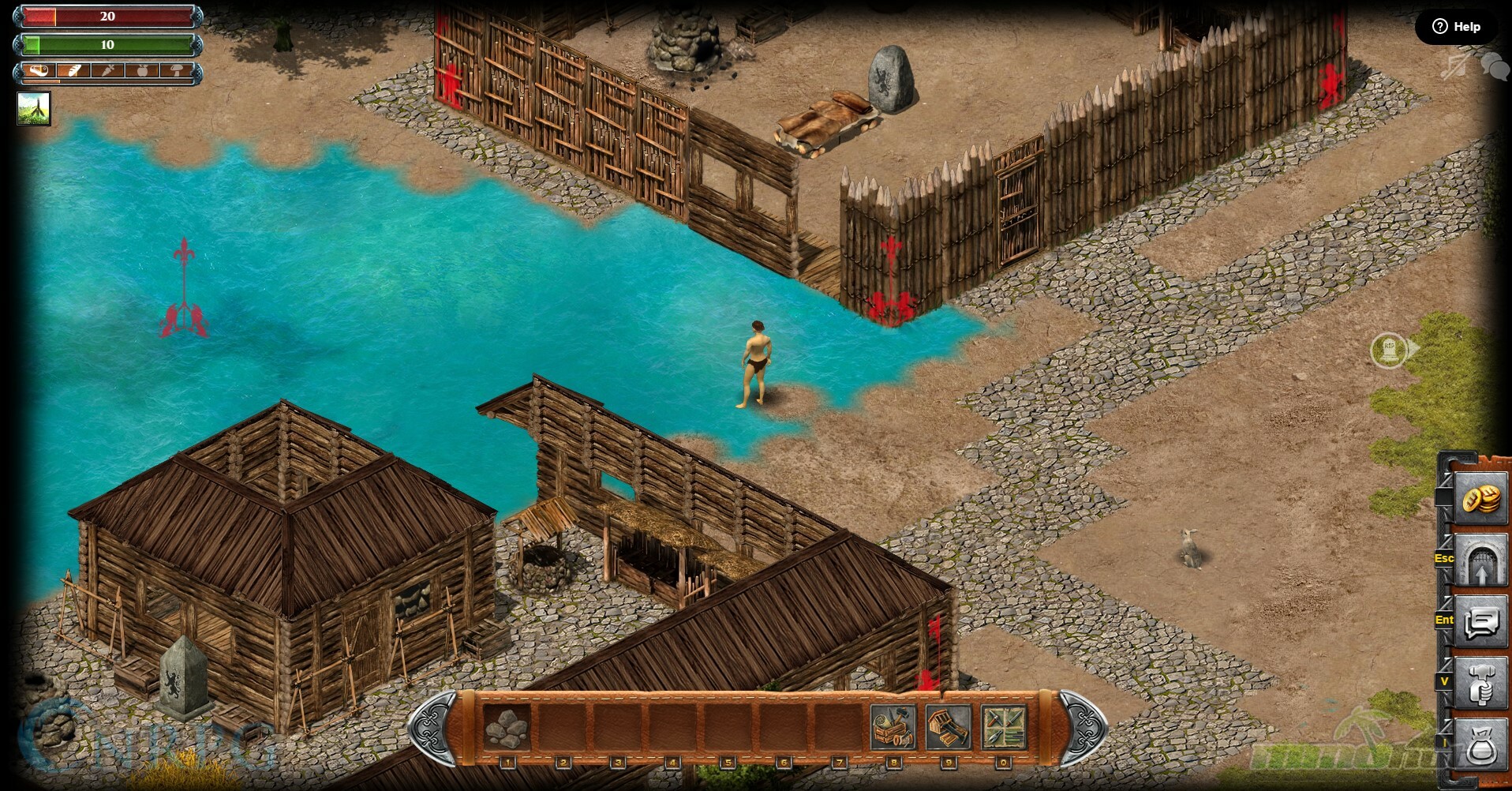 Here players have gotten creative and instead of one large claim, they placed many smaller ones around a lake.

Which brings me to PVP. Wild Terra has open-PVP, which means that if you’re caught in the open you can (and probably will be) killed. Even if you’re careful and pick the perfect spot for your land claim, you’re going to have to leave it eventually. Be it to trade with a nearby friendly settlement or to gather a resource that is outside your walls. What this means is that you’re going to end up, eventually, running into another player that wants to do you harm. 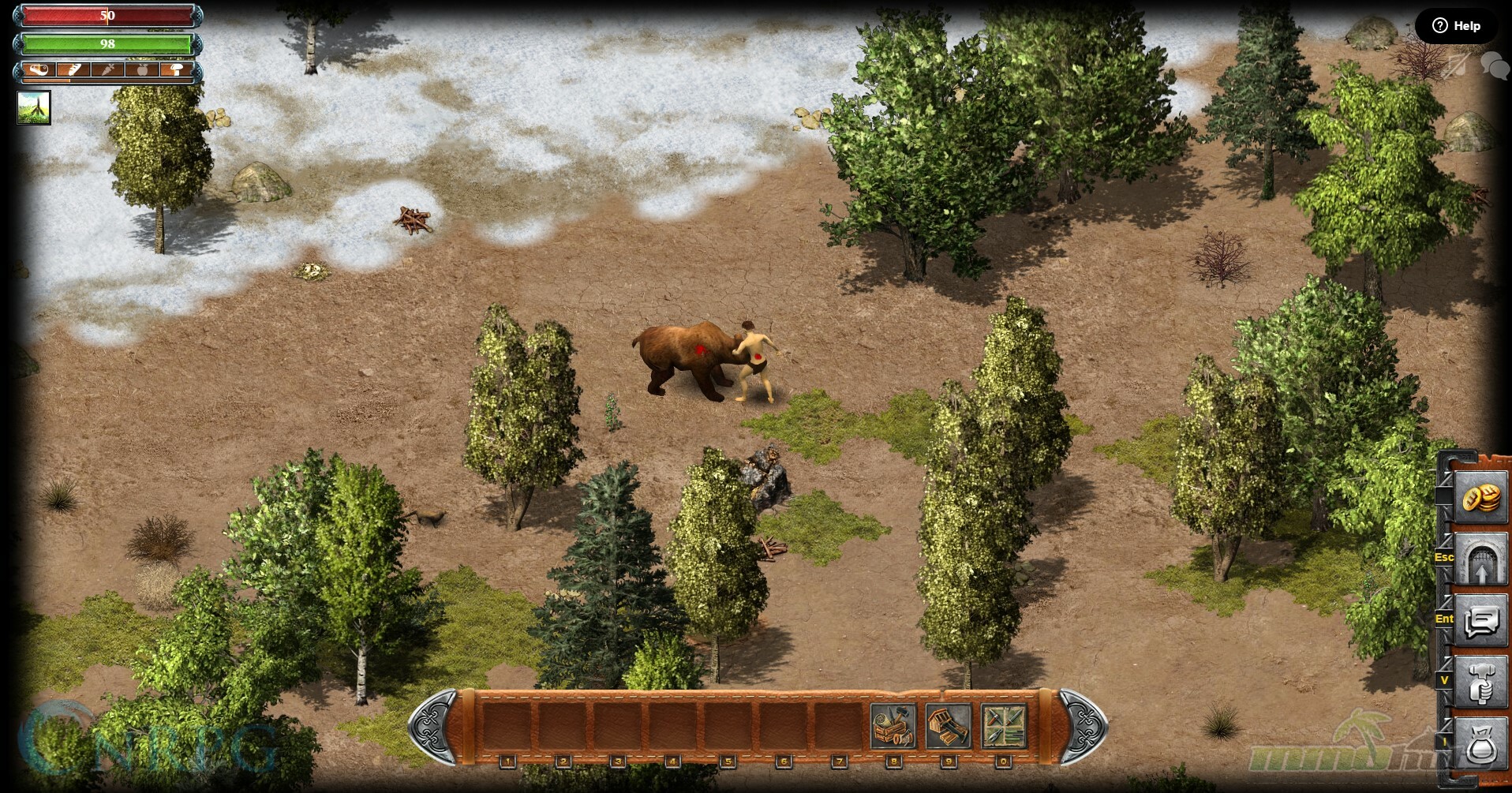 I couldn't find a player for a PVP screenshot, so I found a bear to punch.

Combat in Wild Terra is fairly simple. It’s not like some other 2D Sandbox MMOs with tons of spells and abilities to make use of. At least not yet, and I’m not sure about the devs plans for the future in regards to this portion of the game. Personally, I like this. Part of the reason I enjoy Wurm Online’s combat system is that, while it’s slow and requires a lot of thinking and planning, it’s relatively simple and straightforward. The same exists within Wild Terra, where the preparation and planning that happens before the fight begins is often what results in a victory.

My conclusion is much the same as it was several months ago: Wild Terra is a sandbox game with a ton of potential, and it’s already more than playable. Personally, I feel it is worth the price tag (hence the reason why I paid it… I bought the game even before it was made available on Steam), and I’m saddened that more players don’t. It’s already got a ton of features and several hundreds of hours worth of enjoyable play time. The only restraining factor is the small population, which puts it in a Catch 22. The game isn’t as enjoyable as it could be because of the small population, yet part of the reason that not many players come into the game is due to the (you guessed it) small population. If you’re on the fence, I implore you to go through with the buy.