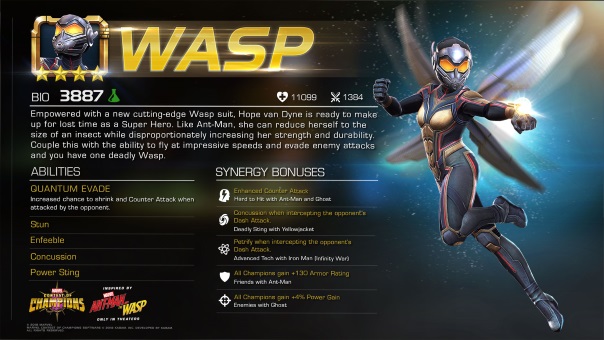 Hope van Dyne is the daughter of Janet Van Dyne and Hank Pym from the Marvel Cinematic Universe (Earth 199999) and will be joining Marvel’s Contest of Champions starting on July 5th, 2018. She’s empowered with a new, cutting-edge Wasp suit, and is ready to make up for lost time. Capable of reducing her size to that of an insect and also has the ability to fly at incredible speeds and evade enemy attacks. A science-based character, we also have her stats and abilities below.

Special 1: Insect Size – Wasp shrinks down to the size of an insect, knocking down the opponent with a flurry of attacks.

Special 2: Quick Sting – Losing sight of Wasp even for a moment will result in a series of painful stings.

Special 3: Titanic Treat – Wasp uses her Pym Particle Disks to blow up a bubble gum package to the size of a car, crushing opponents upon impact.

Signature Ability: Quantum Evade – Increased chance to shrink and Counter Attack when attacked by the opponent.