We gamers aren’t easy to pin down. We’re a passionate bunch, as equally capable of devotion as we are of hatred. We’re as happy to scream “TAKE MY MONEY” as we are to be stingy over Steam’s Summer Sale. To game developers, we can either be laughable lenient or unrealistically demanding. As a swarm, we are impossible to please – so you can imagine the challenges game companies face in preparing anything for our consumption, especially if there’s money involved.

These have also been the challenges facing Behaviour Interactive as it brings Warhammer 40,000: Eternal Crusade out of its early slumber and into production. For the past few months, the team has been gathering feedback from its forums on the topic of Founder’s Packs, carefully trying to consider how to offer early access and presales of the game without upsetting the balance of future gameplay. Today, they’re ready to release those details, and this week we sat down to talk to studio head Miguel Caron in-depth about the Founder’s Pack program.

Let’s start by taking a look at the bottom line. Eternal Crusade’s Founder Packs come in three sizes: the Warrior Pack ($40 USD), the Sergeant Pack ($80), and the Captain Pack ($120). Each comes with the game’s key (the game itself will cost $40 at launch), plus EFP (Eternal Crusade Founder Points). We’ll go into details of what EFP points are and why they matter, but for now, consider them the ‘cash shop currency’ of the game. The Warrior’s Pack comes with $40 worth of points, the Sergeant’s with $92 worth, and the Captain’s with $150 worth. At face value, that means each pack is worth double or more of what its cash cost is, which is an impressive value. 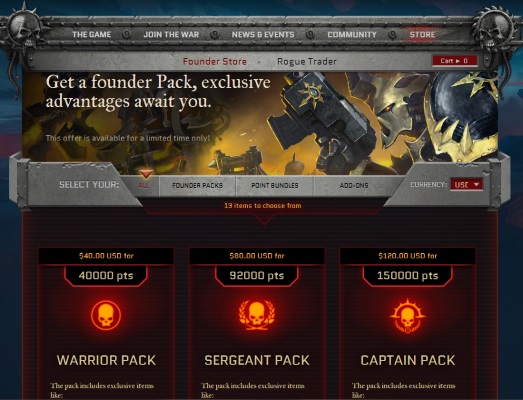 During our talk, Miguel repeatedly came back to the idea of honesty and transparency in marketing. We talked about the value of one cent (the reason the packs aren’t priced at $39.99 etc.), packs costing more than their actual value ($150 cost for $100 worth of items), and free-to-plays offering expensive packs in questionable “buy to win” schemes. Fairness to the player seems to be a major point of emphasis for Behaviour, and it needs to be. Gamers are becoming distrustful as founder’s programs and early access deals are becoming more prolific and, in some cases, used deceptively. We’re fairly confident that Eternal Crusade’s program is one of the best the MMO market has offered.

Warhammer 40,000: Eternal Crusade’s business model is the key to evaluating the Founder’s Packs. As mentioned earlier, the game will cost $40 to purchase and, like Guild Wars 2, will be buy to play: no subscriptions or additional costs will be required of players. An unlimited free trial, or “Free to WAAAGH!” version, will also be available at launch to give players a slice of the game. To further support the game, Eternal Crusade will offer microtransactions through the “Rogue Trader.” The Rogue Trader uses EFP points, with a value of 1,000 points per $1 USD.

Behaviour emphasizes that the Rogue Trader won’t be about paying to win; Miguel called it “Pay to be cool.” We’re told that items will only be cosmetic or convenience. While these terms can be pretty vague at this point in time, items that have already been teased include two-player ground vehicles like the Vyper and Hellrunner Attack Trike, and elite characters like the Outcast Ranger that have limited loadouts but badass appeal. Each faction has its own set of items, with new items added regularly. There will also be a few limited items sold directly for cash, instead of points; these items are aesthetic only and will pay homage to the pre-40K era. 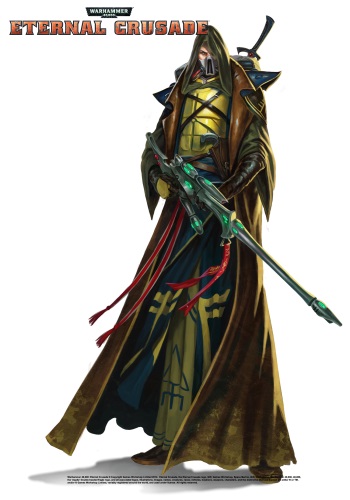 Again, the aim is for balance and honesty: purchasable characters will never have an advantage over base characters, and prices will be kept in check so that nothing is more expensive than the game itself. There will be no monetized progression. Players will get four base character slots so that they can create one of each faction, rather than find themselves one short (as has been a ploy in other games). Finally, the aim is to not offer anything that punishes people who choose not to pre-order and join the founder’s program, keeping the playing field even.

Of course, being a Founder is more than just shoving your money in the developer’s hands and waiting for your game key on launch day. Warhammer 40,000: Eternal Crusade’s development plan puts the game’s launch out 18 months from now, essentially around the 2015-2016 winter holiday season. The game itself goes into full production next month. This means that the next year and a half will not only be time for the developers to build the game from its essential core, which we’ve only seen a glimpse of; it will also be a time for its founders to test the game and communicate directly with the developers to build the game into the final product.

The first part of founder’s access is the common route, offering early access through alpha, beta, and stress tests. These tests will call upon founders in the order they purchased their founder’s pack, regardless of the pack they chose. Players who spend $120 instead of $40 will not get to cut in line. These tests are first come, first serve. 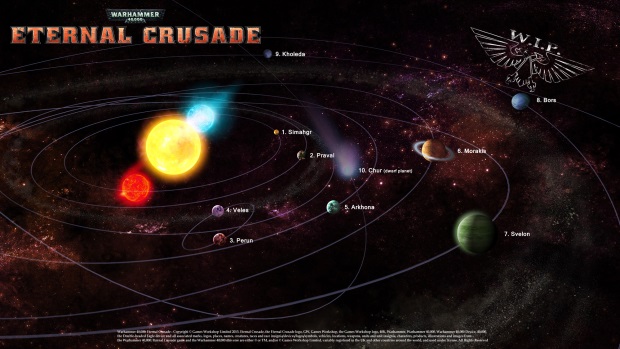 However, founders who purchase the more expensive packs will be rewarded with earlier access to the second portion of the founder’s program: early game modules. If you’ve followed Star Citizen – another of Miguel’s projects – in recent months, you’ll be familiar with this concept already. These ‘modules’ are fully playable miniature portions of the game, small pieces of the eventual full game. In Eternal Crusade, founders will find themselves on a journey to reach Arkhona, having a chance to play with the training cage, personal space, war room, and more. Here, the difference is in timing: Captains will get access to each module first, followed by Sergeants the following month, and Warriors the month after that. These perks are permanent and will also include premium forum access, character and guild name reservations, and more.

Founders will be able to spend their EFPs at any time during testing, with the ability to “reset” them during most points of the testing phase. Resets refunds all purchases automatically, allowing founders to try out different items or swap points between characters. Since the most expensive item in store is 25,000 points, even the Warrior Pack founders will be able to buy some expensive items. In addition, players will be able to purchase additional EFP and earn EFP and titles by recruiting friends to the founder’s program. These additional points and purchases will count toward their founder’s package, allowing lower tiers to “upgrade” to higher tiers.

While there’s still more details to the Founder’s Pack we didn’t cover, which you can find detailed on the game’s official website, we want to spend the last moments of your time looking not at the fine print of a purchase agreement, but at Behaviour Interactive’s overall value system as it approaches one of the most loved gaming franchises. Like you, we hope that this isn’t just “PR speak,” but so far we see evidence that company means what it says.

Miguel constantly reminded us during our talk of their commitment to honesty and transparency. This commitment permeates throughout the development process, with an attempt to keep no barriers between players and developers. It’s also reflected in today’s released video, which has been released with “makeup,” a fact that Behaviour is putting in plain sight of the game’s watchers. While the team realizes the need of the industry to see a taste of the final product, they also don’t want to mislead players with dazzling CGI and over processed gameplay. Miguel also emphasized that the team is striving to listen not to the loudest majority, but to the actual majority, seeking out communications with quieter community members. The ultimate goal is to remember their role as entertainers, and keep players involved in the process from start to finish – a goal that can be achieved, in part, through the founder’s program.