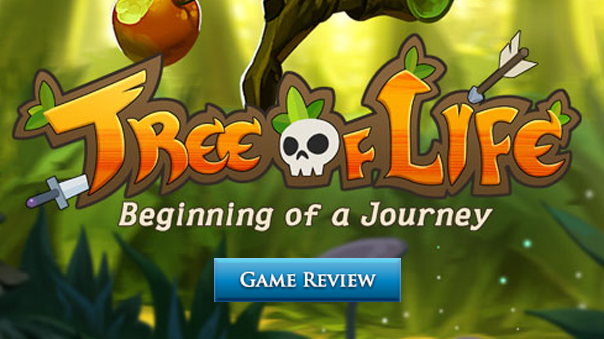 In one great big shared environment your options are limitless. Starting from washing up on a deserted shore and fighting just to survive through the night, to making a grand castle even a legendary king would envy. It all starts and ends with you and the pace of your own progression.

Tree of Life is an ambitious love letter to many of the open-world survival games that’ve come and gone over the years. But, just being passionate about something doesn’t automatically make it good. Those juggernauts whom meticulously and carefully constructed their titles have but one thing to say to this husk of an imposter: ‘Return to Sender.’

The game world is enormous! Relatively nice to stroll through due to the colorful cartoony-styled graphics no doubt, but huge! Way too big even. Just to get from one area to the next takes up to five minutes of monotonous auto-running. However, instead of celebrating the vastness, it’s an incredible issue – simply because there’s nothing there.

You have vibrant nature all around you filled with cute animals, valuable materials, and the occasional player-made building, but otherwise it’s completely devoid of any semblance of substance. No quests, NPCs, automatically generated cities, random events, any kind of point of interest, or non-collecting reason to explore. It’s straight up alpha-Minecraft levels of empty endless expanse.

The idea is supposed to be something like they wanted to make sure each and every player had enough room to roam around and settle down without bumping elbows with other people. What’s really surprising is that despite Tree of Life’s relatively popularity I had trouble finding anyone playing remotely near me. It’s kind of creepy to walk amongst all the player constructs, but to not see the players supposedly living within them or traveling about. If you can’t find them in the first place, that means no co-op antics or pvp mayhem to enjoy. It’s not that big a deal since there’s plenty of solo content, but in MMO games it always helps to have more people join in on the fun. Despite it’s name, my experience was quite a lonely and barren one.

All that aside, you, as a recently stranded person, must do what it takes to survive. It can be a bit tricky, but not in the way you may think. This is a PC only title, so why are the controls designed with a controller in mind? Both the in world navigation and menu interaction, is all sluggish, wonky, and not at all taking advantage of the power of a mouse and keyboard.

Still, that torch and next meal doesn’t make itself. Through completion of the tutorial in about an hour’s time you’ll discover nearly every aspect of the game in a non-hand-holdy kind of way, which is nice. Whether it’s being introduced to the 21 different skills, collecting materials, crafting, fighting enemies, or taking the initial steps towards making your base, I felt a solid sense of direction without being dragged by my feet.

Then the tutorial ends and you’re completely on your own with the remaining goals being level milestones. This is a small thing to complain about since I can easily look up a wiki to figure what’s in store, but I rather liked the goal-by-goal building up of my base, of which, I could break away from at any time. I wish they had continued that.

However, this introduces a more sinister side of the game once you figure out what those levels entail. Bit by bit, it becomes increasingly evident most of your progression doesn’t matter in a genuine way. Or in other words, the only reason most of the skills exist is in the way that they do is to be a feature. A selling point. A check mark on the list of things that “have” to be included in an open-world survival game.

Taking ranching for example. Instead of it being its own reward through the achievement of other skills, it became its own skill to pad the time commitment necessary to access new content.

The lack of implementation finesse doesn’t lie solely in the skills; it’s also in mechanics like hunger. Why does this need to exist? In a game like Don’t Starve it made perfect sense. The whole point was to not die, and keeping up with hunger on a consistent basis was a core mechanic. As the player became more skilled, hunger would then become less of a pressing issue.

Here however, after about the first 30 minutes, you’ll never have to worry about hunger again because animals and fruits are effortlessly available. Food could’ve been used just to heal you and effectively not change their place in the game. But instead, it became a minor nuisance over the course of your theoretically long playtime for no other reason than to be another tick in the box of what a survival game “needs.”

Tree of Life is a great big bundle of cool ideas from a huge roster of great games. Despite the magnificent models to work from, the execution here is soulless, unmotivated, and outside of the first hour or so, entirely boring.