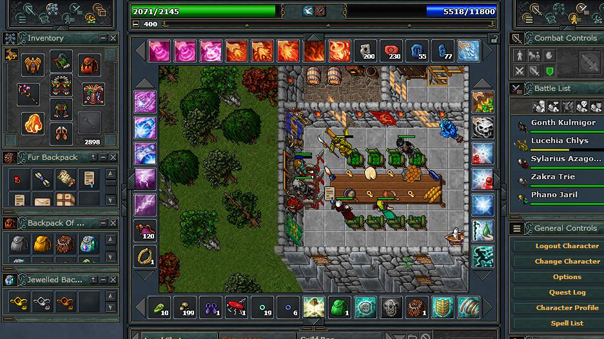 Released way back in 1997, Tibia is one of the oldest MMORPGs that’s still around and prospering. The game’s graphics are very simple and reminiscent of old school RPGs like the Ultima series. The fact that Tibia still has over 300,000 active players shows that players prefer simple graphics, low system requirements, and simplicity over fancy graphics and complicated gameplay. This formula may explain the success of other graphically unimpressive games such as RuneScape and Dofus. Like both those games, Tibia is only partially free. A premium membership at $10 a month is required to access many of the game’s features but the free account gives access to enough content to get a good feel for the game so if you’re looking for something nostalgic, a throwback to an earlier time, read on.

Account creation is done through the official site but so is character creation. Another oddity is that players are emailed their password which is a random series of letters and numbers. Use this to log in than be sure to change it to something of your preference. Players must select which of the 50+ servers they would like to create their character on. All servers are located in either Germany or the United States and come in three forms; normal, non-PvP, and PvP. Normal servers have open PvP in most locations but indiscriminate player killing carries stiff penalties. In non-PvP servers there is no open pvp while in PvP servers, play killing doesn’t carry penalties and even rewards players with experience. Servers also vary in population, with fuller ones having queries to log in which can last up to 10 minutes during peak hours so be sure to pick a low population server. 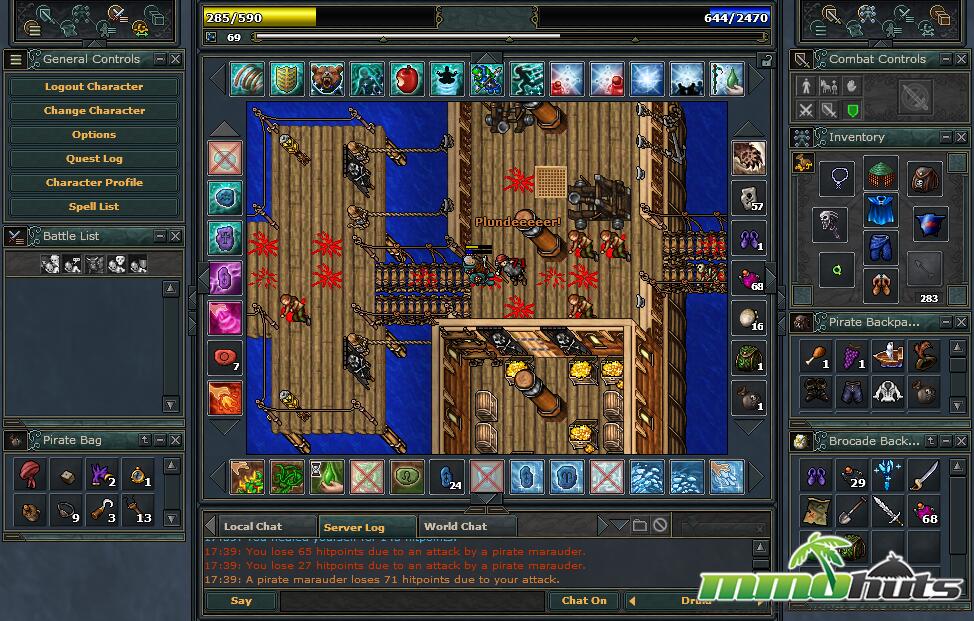 Don't judge this book by its cover.

Surprisingly, Tibia has dozens of resolution settings and a fullscreen/windowed option. Once logged in, players start in a special tutorial area which they must complete before moving on to the starting city of Rookgaard. Movement is done either with the mouse or keyboard, a choice most newer games don’t offer. Interface menus like inventory, equipment, and the skills menu are shown on the right hand side of the screen and are separate from the display area. Many old RPGs used this method which made organizing menus much easier but left much of the available space unused. Another forgotten technique is the way Tibia handles interaction with NPCs. Players must say ‘hi’ or ‘hello’ to initiate conversations than say highlighted keywords to continue the conversation. So for example to help an NPC that says ‘Will you help me defend my home’, you must type ‘home’ in the chat box. This method has since been abandoned but still maintains its charm.

The first phase of the tutorial instructs players on how to equip items and has them hunt their first monster — cockroaches. Whether you’re a fan of old school RPGs or not, the combat effects in Tibia are disappointing to say the least. No weapons are swung, no animations are shown. Players simply walk to the tile next to a creature and watch as its hp goes down. Some blood is splattered around but nothing more, not even an attack sound. After learning combat basics, players are taught how to move objects on the floor by dragging them with the mouse. The final step involves customizing your character’s appearance and learning to trade with NPCs. Appearance customization is very basic in Tibia; chose from 4 models and the color of several body parts titled Primary, Head, Secondary and Detail. Don’t worry too much about your final selection, players can change their appearance at anytime for no extra cost. 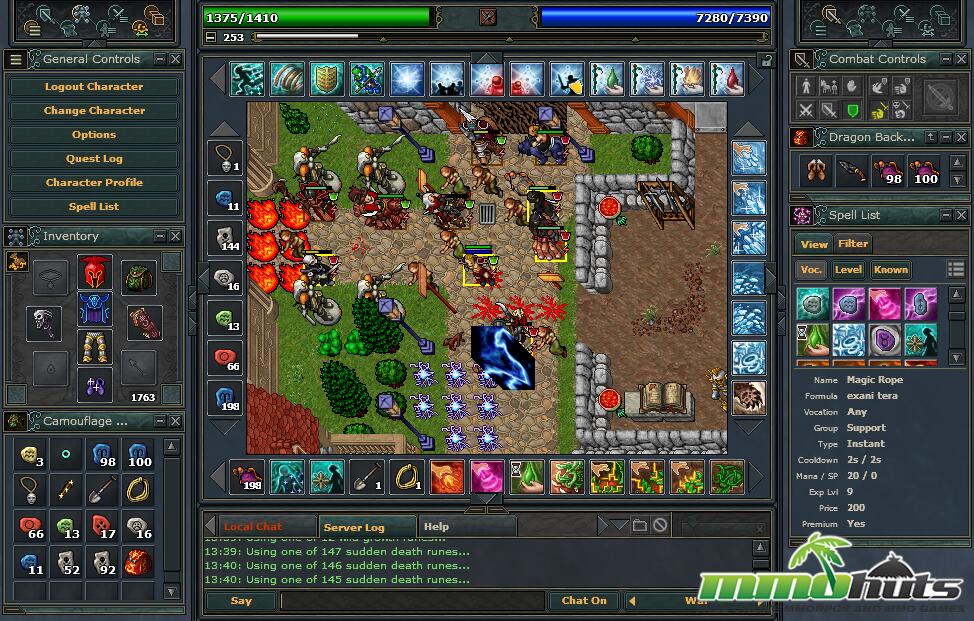 Battles can get a bit too hectic sometimes.

Sticking to old school norms, Tibia is an open ended game without much in the way of direction. Quests are available through the NPCs in the beginner town accessible after completing the tutorial but they are all of secondary importance. The best way to start is to walk around and explore the map. Like many RTS (real time strategy) games, the Tibia minimap starts blacked out and an area is only revealed when explored. One thing that frustrated me while playing Tibia was the absurdly slow movement speed. Your character crawls to his or her destination one square at a time, often stopping when you hit a stone or tree. Another major issue is the fact that a large percentage of the game’s population doesn’t speak English. Tibia is a popular game in Latin America and Europe and while you’ll always find people who speak at least some English, communication could be a problem.

Once you hit level 8 you can leave the newbie isle of Rookgaard, never to return again. It is at this time that players make their first and only class (or vocation) switch. There are four vocations available to chose from; Knight, Paladin, Sorcerer and Druid. For a description of each, please see the overview tab. The Tibia developers work hard to maintain balance between the vocations and continued patches address balance issues that come up. There are two way to cast magic in Tibia, using either mana or runes. Spells are evoked in Latin, which adds a nice touch but I recommend new players to stick with either the Knight or Paladin for their first character. 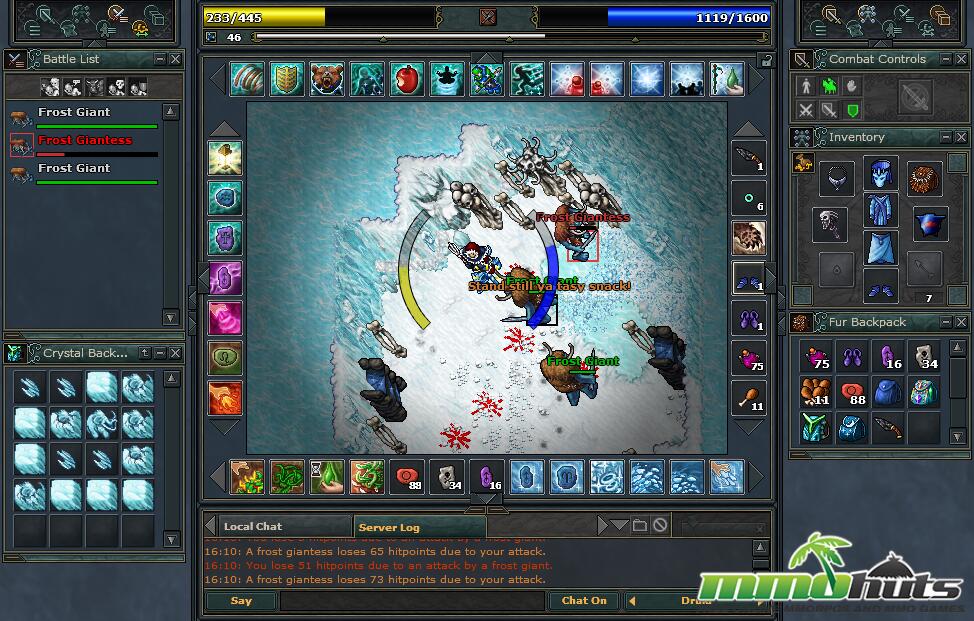 All vocations use magic to some extent so you won’t be missing out on anything. But the higher in level you get, the more the difference between paying and free players becomes. Besides being barred entry to large portions of the game world, free players cannot become advanced versions of their vocations at level 20, that right is reserved for premium users only. Luckily your first few hours in Tibia should be enough for you to decide whether this is the game for you.

Tibia continues to be a successful MMORPG due in part to nostalgic old school RPG lovers and the devotion of its community. The fact that the game can run on almost any machine and is simple to play help as well. Those who are looking for a throwback to the old days will enjoy Tibia but I can’t recommend it for new players when there are much newer games available that are 100% free.