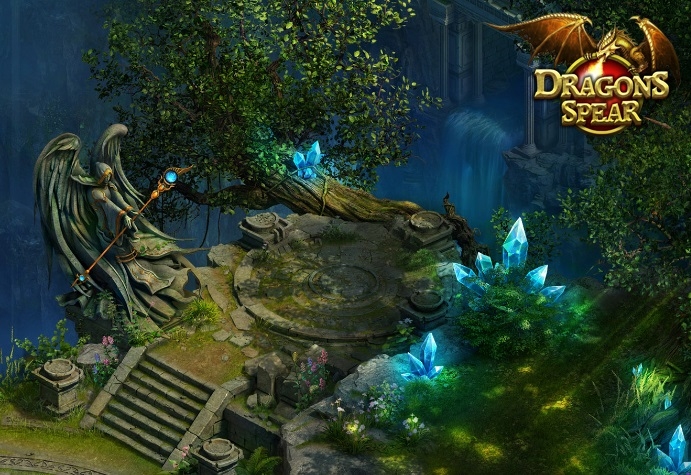 NGames is proud to annnounce that their new MMORPG Dragons Spear will be launching soon! Dragons Spear, an MMORPG (massively multi-player online role playing game) in real-time, features rich class skills and spectacular skill effects which offer players a real combat experience. The game story is set based on European fantasy. The main plot follows a thrilling and risky quest storyline. You, the Savior, will fight evil forces in the fantasy world.

From year 689 to 563, the Evil Queen Edaliya waged a war that ended the Dragon’s reign. This lead to Edaliya’s Evil Age, the darkest age in Dragaeri history. Colin who was an expert in dark magic volunteered to fight for the Evil Queen for fear of the queen’s power or possibly, a more devious scheme. The raging Deathlord King Ukuri defected to the Evil Queen’s side, making her army even stronger. Meanwhile, the unidentified Fire Snakeman recruited soldiers for them.

The people in Dragaeri fought against the Evil Queen several times, but none of their attempts were successful for Edaliya’s evil forces proved too powerful. Is the legendary hero hidden somewhere in Dragaeri, waiting for a chance to reappear? Or, is it just a figure living in the dream of those desperate people?

Realistic Scene
Set out from Homules, cross Clay City, and finally you will arrive at the Capital that you have always dreamed of. Each scene and map will bring you an authentic experience. NPCs in the game have their own personality, which enhances the unique story and gaming experience.

Multiple Systems
A wide variety of featured game systems in Dragons Spear can meet different players’ needs. Dragons Spear provides multiple ways for players to grow stronger. Besides following the main storyline to level up, there are many other ways to boost your power and gather resources in the game.

MMO Platform
The in-game chat channel is a good place to go whenever you want to say something. In order to promote player interaction, the game also introduces many social features, such as the Mercenary Party, Worship and Despite, and the Flower Gift.

Interesting Story Dungeons
In Dragons Spear, you will never get bored with dungeons. No two dungeons have similar stories. They are carefully designed with a closely-connected storyline and interesting gameplay, such as Sacred Tree and Fallen Space. Meanwhile, multiplayer teams are available, which promotes cooperation and communication among players.

Gear System
The gear system is a large system in Dragons Spear, from which Enhance, Forge, Refine and Gem systems are derived. It’s like an empire that requires players to invest in massive Energy to enhance and boost gear. In return, players will receive a big boost in combat power. The gear system is the main way players increase combat power. Plus, the story dungeon “Ancient Ruins” is also a major source for gear.

Mercenary System
The mercenary system is an indispensable feature of Dragon Spear. It can supply players with massive Combat power. As an independent system, it has a complete structure that consists of mercenary recruitment, breeding and mercenary gear development, plus with leisure and social gameplay like mercenary multiply and party.

Skill System
The skill system is an important part to increasing character combat power. There are three types of skills: active, passive and class-changing skills. Players can buy skills books, spend EXP and Silver to learn skills or change skill level. The skill level and activation are closely connected to the player level. After joining a guild, players are able to active guild skills, spend Reiki and Guild Contribution to breed skills. In addition, discover dungeon skills in some dungeons. In a word, the skill system is rich in content and fun to play.

Guild System
The Guild is a small group where people get together for the same purpose. Players can create or join a guild. They can accept guild quests, enter the guild instance or join the guild war and receive rare items. There are lots of ways for players to quickly boost power and grow up in the guild.