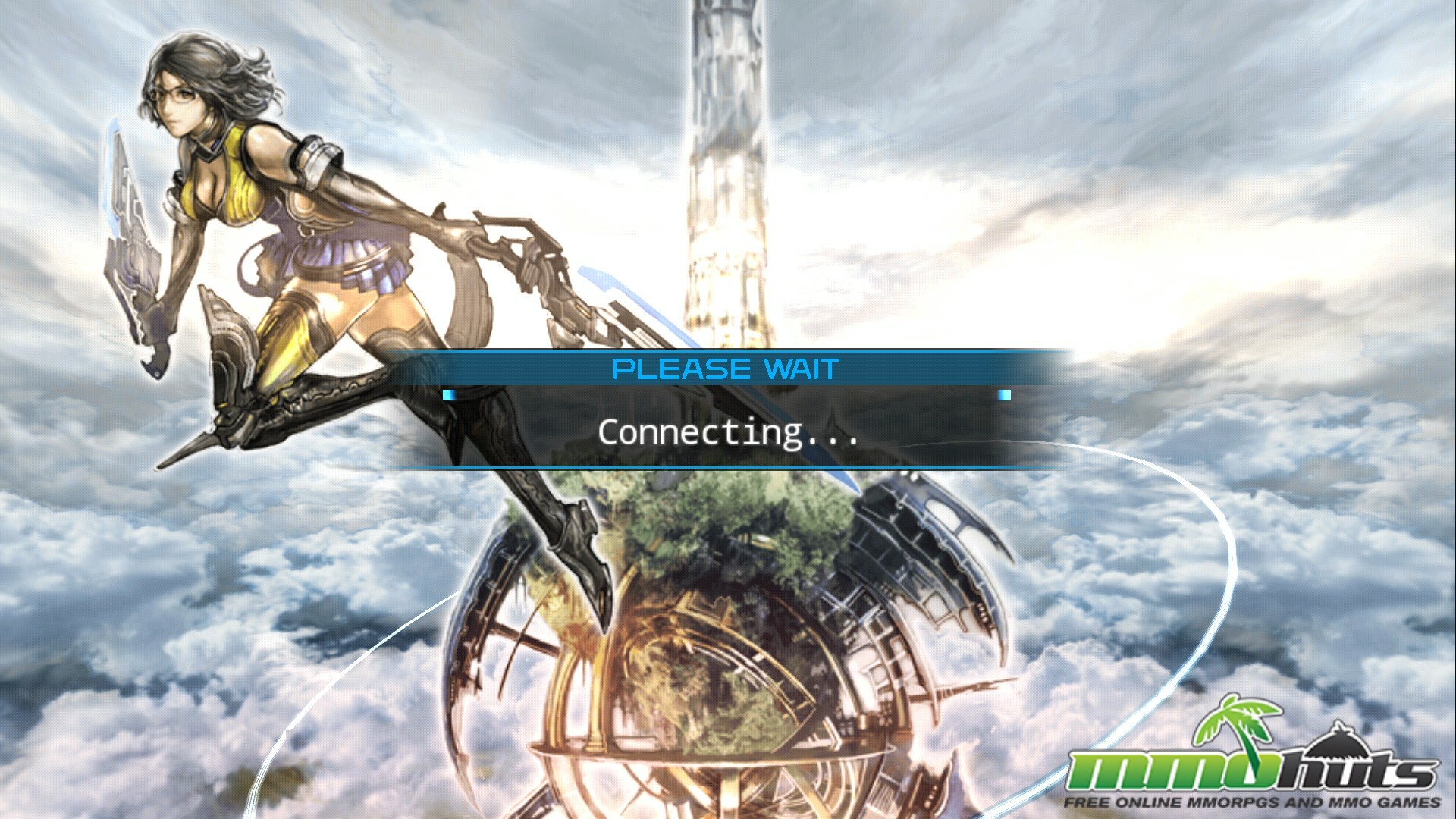 Mobile Games are a tricky beast, and mobile MMOs are even harder to pull off. Sure, games like Candy Crush, Mortal Kombat/WWE’s fighting games, and Brave Frontier all have clones that are easy to get into and appeal to a variety of people. But Stellacept is unique in that it is an action MMO, where you actively move your character through zones, completing quests like you would do in any ordinary PC MMO. Admittedly, games like this require a decent smart phone, and do chew through battery at an alarming rate, but it is fun nonetheless! Launching last month, it’s been a hit on the Internet. However it is definitely a JRPG (Japanese Role-Playing Game), and that style of art/gameplay is not for everyone. It has a clever blend of fantasy and sci-fi, and it’s definitely more than just kill monster A for stranger B. Customization is insane, with plenty of options for looks, weapons (nine in total), and plenty of skills to mix and match to your heart’s desire.

When I’m writing a review, I take the time to do some research on a game to learn what is going on and what people are saying about it. I feel like it’s important to have some knowledge going in. However, I could not find a single bit of information that wasn’t on a Japanese site, and while that’s not terrible, it’s pretty hard to come by for a non-native speaker, even with Google Translate. The game feels like a more customizable Phantasy Star Online. The only race it seems you can play are human, but there are other races in the game with which you interact. Players travel to other planets, righting wrongs and triumphing over evil, discovering new zodiacs/constellations to improve your powers in the process. It’s flashy and colorful, and though it might be better to play plugged in to your wall or PC, it’s definitely a fun mobile title, one that stands out with how interactive it is.

It's not a JPRG till you're talking to cat people.

The story is fun, and it’s interesting. Sure, there are bound to be gaffes, typos, or other things, but that’s the bane of any good RPG; they’ve been in our lives since Final Fantasy 1 and they aren’t going anywhere anytime soon. You unlock other worlds to explore, fight massive bosses, and can party with your friends to tackle bigger challenges. It truly is an MMO in every sense of the word. The world around you looks like a fairly drawn fantasy anime film, contrasting the sharper science-fiction look of the gear and menus. This contrast defines the game’s overall style. Most planets in this universe are bound to look peaceful and calm, with rolling hills and beautiful meadows. Some of the humans look generic and plain, and most of the other NPCs are adorable and cute, but I feel like it makes sense. Not everyone is meant to stand out, and in this world, nobody really does.

Defeating enemies gives you “stella,” which is used to customize your stats and learn skills. It feels like a generic term to describe anything you update/upgrade your character with. This kind of bothered me, as you have Green Stella and Blue Stella, both doing different things. Simple might be best, but it felt a little too simple as far as nomenclature went. But customization is deep, naming aside. You have three styles of weapon, (Slash), G (Gun), and M (Magical), each one with their own weapon styles. I would not invest in these until you know what all the weapon styles do and you have an idea of what you want your character to do. You can have two weapons equipped at once and swap between at will by a simple button press, but a single weapon won’t affect every enemy, so it is wise to be proficient in two styles. 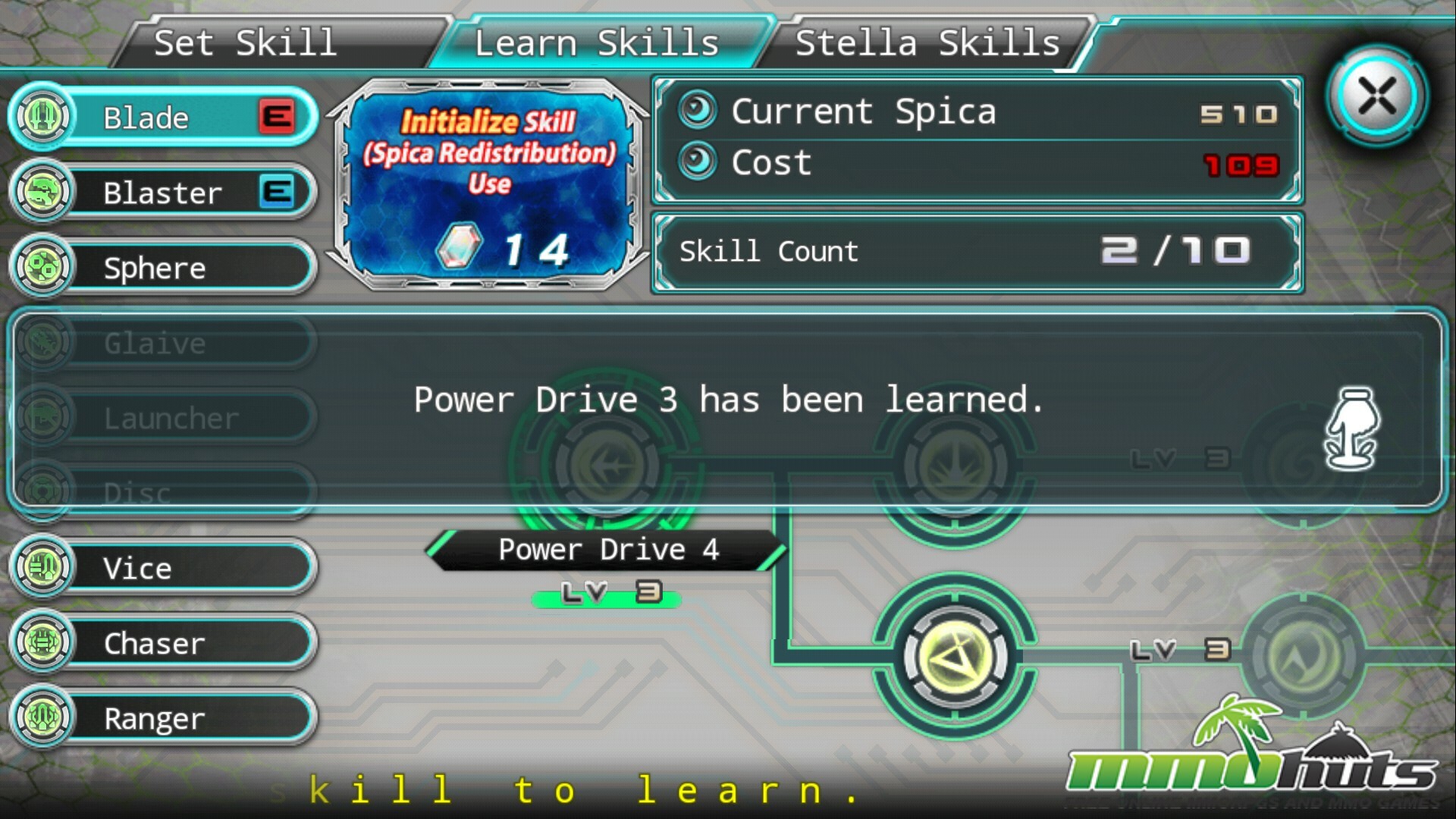 Choose your leveling carefully, or fall into the cash shop trap.

Weapons unlock after investing points in certain styles, and it takes quite a few points to raise a level. It is highly recommended to do research on what it takes to level each. Though you can get reset items, it would behoove the long-term player to do a little pre-game reading if possible. Which again, may involve some google translating. You can also unlock skills on a skill tree for the various weapons, and before you can move down the tree, you need to level skills a certain amount. Luckily (at the start at least) it is pretty easy to gain Stella to do all of this stuff, and simply investing in one of the upgradable items (Stats, Weapon Styles, Skills) does not appear to drain heavily on the others if at all.

Your stats all have uses too, and upgrading them is imperative. The menus are pretty easy to use, and you can customize what three skills are on your bar. There’s a button to press for attack, and the skills make a sort of half-circle around the attack button, close enough to tap whenever you want. There are also skills that combo off of each other for more damage/effects; personally I started out investing most of my stat points into strength so I can blast through early quests with tons of damage, before I worked on other things. But that’s personal style coming into effect: I want to obliterate things in a swift manner before they can start killing me. I should also point out that those zodiac signs mentioned above increase your power; there’s also a “burst mode,” a gauge next to your HP bar. When it fills to 100% you can tap it to temporarily become a glowing, horrifying, asskicking machine, slapping your foes in the mouth with the force of a herd of buses that are also on fire. This is not unique; you aren’t the only one who can do it, and it’s kind of cool to see that even NPCs have awesome powers. No unique snowflakes here, just every kind of generic looking bad ass. You’re just more awesome than most. 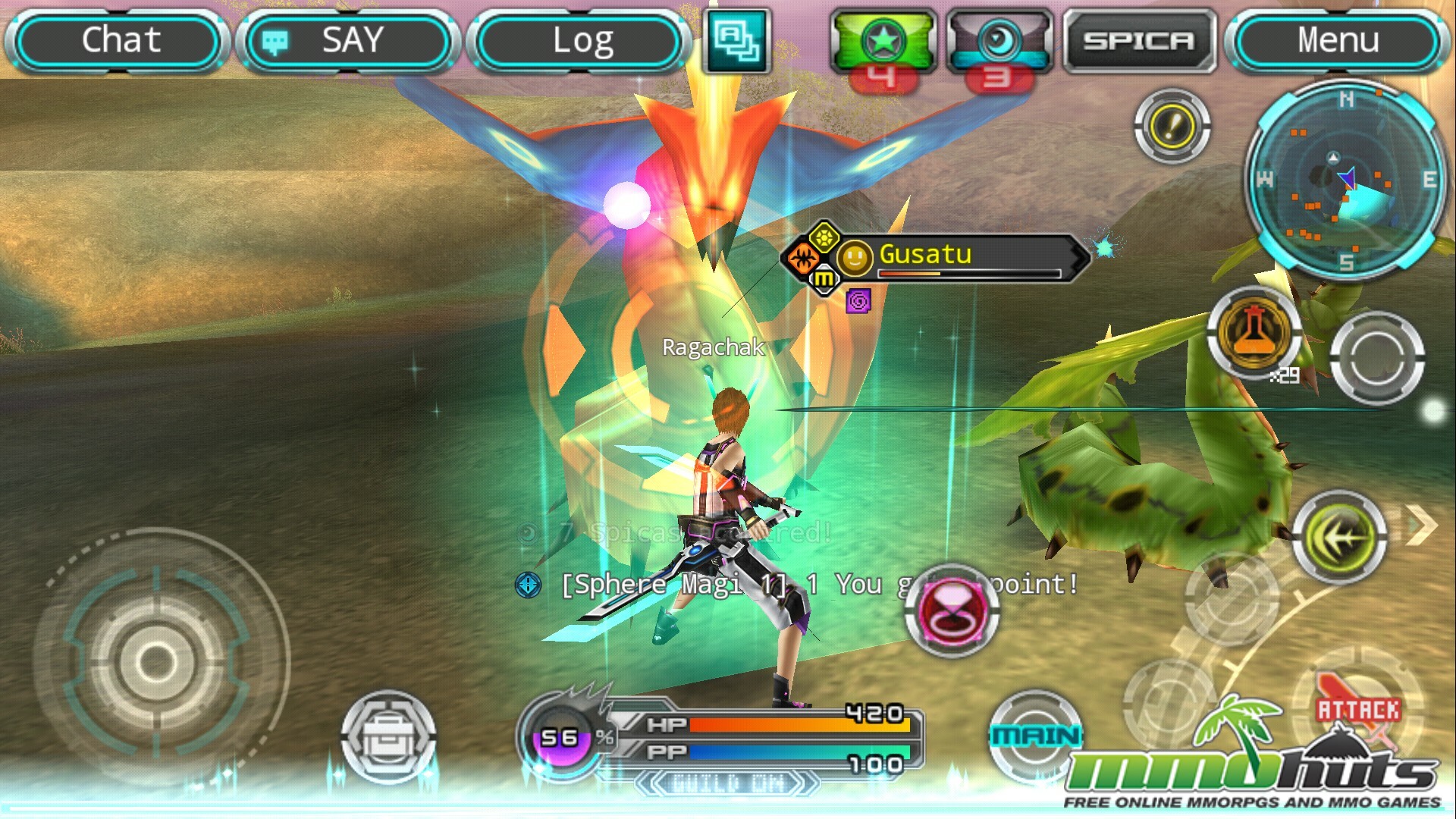 This game is all about that sweet, sweet, Stella action.

Every time I look at a free to play game the first thing I do is look at the cash shop. There’s basically always one, and it sets the tone for the rest of the game. It’s definitely not pay-to-win, but it is pay-for-convenience or pay-to-look-cool. Lots of awesome cosmetic costumes, a daily rolling to get items to help you out, log-in rewards, all pretty standard fare for mobile titles/free games. They in no way make it better, other than offering a few items for the sake of resetting skills/points or starter kits. Getting gems to use the shop seemed to be pretty easy for me as well, I had six before I knew what was going on, and they went to making the start of the game a little better.

It would definitely be a fun game to play with friends who are not local, set up a guild, and beat the stuffing out of bad guys on the phone for when you don’t have a handheld. There are lots of little touches done well to take the MMO trudgery out of time strapped mobile users: it can teleport you to your quest reward person, and the aura around your characters feet aims at your current quest. But it’s not perfect. I hated how difficult it seemed to be to unparty. I could not find it for the life of me when I began, and would turn the game off just to leave a party for a mission. On a whole, it’s a really stand-out game, and I think it’s going to hold its own in the current overflowing market of good mobile games.

For a mobile game it really is pretty. The designs are a little sharp or blocky at times, but it is a very attractive game.Tthough I imagine that may contribute to how badly it eats up a battery. Menus are easy to navigate, all the zones I visited looked a bit different from one another and did not seem out of place.

The game was pretty simple to control, though I do wish I didn’t have to swipe the screen to rotate, and pinch/drag to zoom in and out, but that’s the way mobile games are. Buttons are easy to hit for combat, not too big or too small, and menus provide ample descriptions for items/skills.

I have not seen much of this game other than simple quests and killing. That’s not really bad, but I have not heard of any raids/dungeons, though there are bosses in the world that should require a party to handle. It’s still new in America, so time will tell if this improves; I wouldn’t doubt it though.

The sounds of this game are pretty great, I have to say, especially for a mobile title. On the other hand the music sort of droned on in the background. It was good, and calming in the zones that called for it, but I didn’t find myself humming it, or cranking it up. Sound effects were terrific though, definitely suited combat.