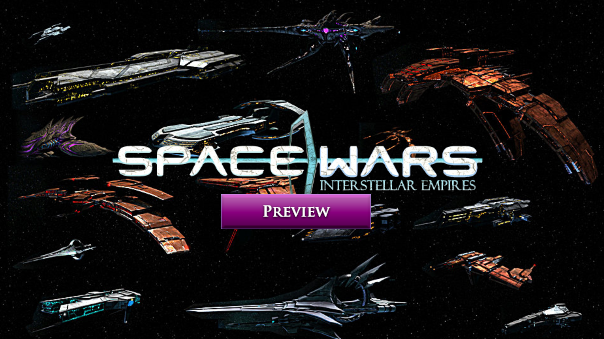 Space Wars: Interstellar Empires is a turn-based capital ship styled MMO set in a world in conflict between two factions, the Sol Imperial Worlds and the Genari United Empire. You are a captain in one of the faction’s capital ships as you fight with fellow captains against the other faction’s captains.

As a captain of your selected faction, you will be given control of a star ship that you can use to travel within your sector or engage in PvP battles against captains of the opposing faction in instanced, turn-based battles. That’s basically what you’ll be doing most of the time in game. Aside from that, you’ll be farming resources that you can use to buy another ship, which believe me is going to be one of the things you’re going to do a lot.

The initial impression I’ve had with Space Wars is that the game feels like a more combat oriented version of the Star Trek universe (not like STO, because that’s already a bit more combat heavy than I’d expect from a Star Trek title).  Sol Imperial Worlds is the Space War version of the Federation while the Genari are the Klingons.

Meanwhile, aside from getting ships and fighting against the Genari or Sol, you can also work on “evolving” your captain by upgrading his skills and abilities as you level up. Sadly, that’s the most you can do with your hero because customization options aren’t as elaborate as other games out there.

Space Wars: Interstellar Empires brings a unique mix of gameplay features in a sci-fi themed game. The usual setup for capital ship battles is that you can maneuver and battle against other ships in real-time, while targeting and crew member allocation in battles is automated. However, Space Wars turns the status quo on its head by changing real-time ship to ship battles to turn-based, strategic, shoot outs. 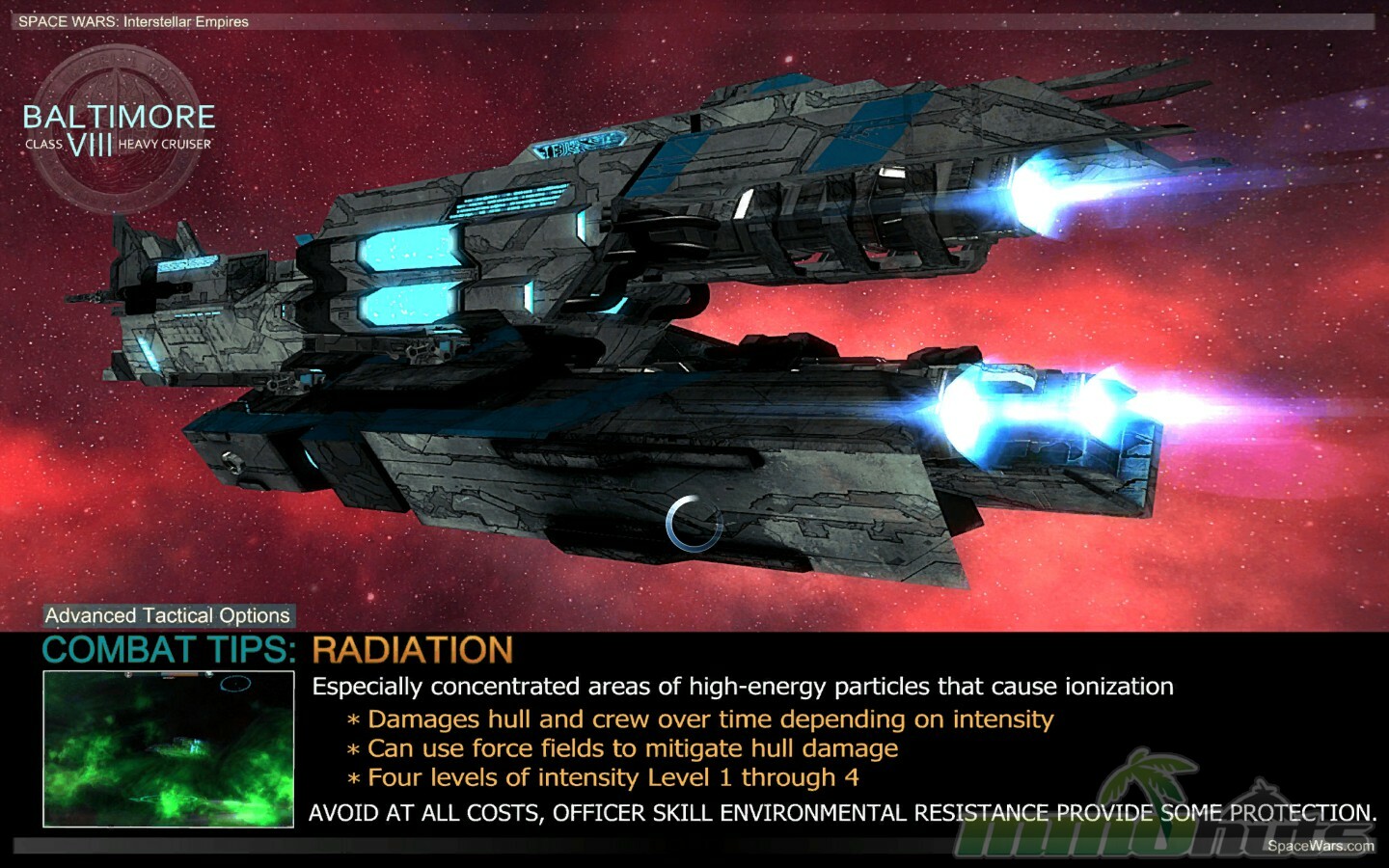 One of the many ships you may pilot.

Battles happen within a grid-based combat map that’s littered with not just opponents and environmental hazards. These combat maps are sprawling and big enough that they can house not just 1v1 battles but big faction encounters.

Each match is given an allocation, combat, and repair phase. Captains can allocate their ship’s energy and resources to the various tech and weapons during the allocation phase. The amount of energy you allocate during this time determines how much you can allocate to your shields or to your ship’s scanners. This determines how strong your weapons and shield are, how far can you scan for enemies, and how sturdy your ship can take damage during the combat phase.

Combat phase unfolds as you wait for your turn while other players in the board play out their movement and attacks. Combat happens when your enemies ship falls within the firing arc and range of your weapons. Firing at enemies isn’t as easy though, as Space Wars shows you the accuracy of each weapon system. The accuracy of attacks degrades on the distance your ship is at compared to your target enemy ship; the longer the distance between your ship and theirs, the lower the accuracy your weapons have. However, you can tweak this through your captain’s ability which is integral if you want to snipe at enemies.

The third and last phase is the repair phase. As the name indicates, this phase has you allocate the amount of points you can use to heal your systems or your hull that was damaged during the combat phase. You can repair damaged shields and scanners or heal hurt crew members. This phase allows you to lick your wounds during the combat phase and a breather as from the “action” the game gives you.

The unique thing about Space War’s battles is that players can just jump into conflict zones and join or leave matches whenever they please. This is unique because you normally would expect this from real-time games, not turn based battles. This type of game system has its pros and cons especially since small encounters can immediately become large scale armada battles in a skip of heartbeat. Those kinds of battles will feel tedious specially if you just wanted to play for a few rounds. But of course, since you can leave at any time during your turn, there’s that feeling that you can just commit to not staying longer in definite losing battles. 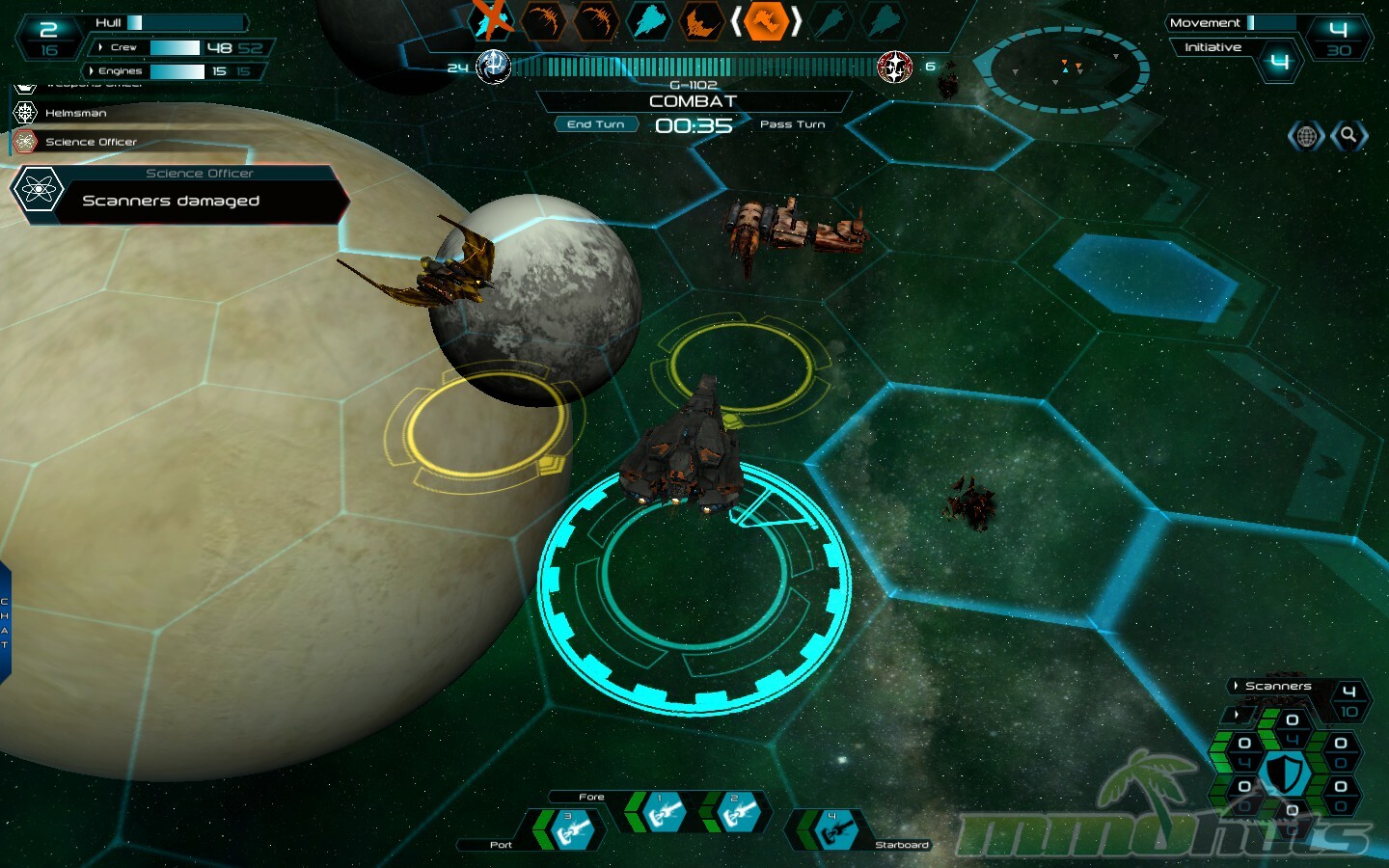 A close-up during combat phase.

Tilting during these battles is more likely to happen with this kind of battle setup. Factions can suddenly become outnumbered affairs that would force you to bail out unless you want to sacrifice your ship to get more points. Sacrificing ships in Space War is not consequence free, because when your ship gets blown to smithereens, you have to go back and buy another ship in the game’s shipyard. Thankfully though the starter ships are free so at least when you inadvertently blow your ship up, you can just get another ship, if you’re just starting off.

Space Wars is a game that feels like a video game version of a miniatures spaceship game where people can leave or join whenever they want. Under optimal circumstances it’s a good thing because battles can feel grander and the stakes higher as you get more expensive ships in the late game. However, the gameplay setup makes sure that you can’t just be a casual player if you want to progress far in game, since the game is currently community driven and you wouldn’t like to be known as someone who doesn’t back their faction up when the chips are down.

Overall, Space Wars: Interstellar Empire is a game that’s not for everybody. With today’s standard of patience, people will love the turn-based strategy game that gets to pile on when people come in. Or love it because space battles would take longer than what you initially expected. Also, the game requires you to think things through properly specially with the shield allocation. Don’t be like me who didn’t, and thought that shields are automatically up in game. I was wrong, and it cost me around 2-3 ships in the process.

This is a game that will require your time and possibly money (in the future), and if you’re someone who has only a little of both, I suggest you move along and find another game, like STO maybe? But if you’re someone who’s in for a long haul and is looking for a solid strategy ship-to-ship battle, then Space Wars will not disappoint.