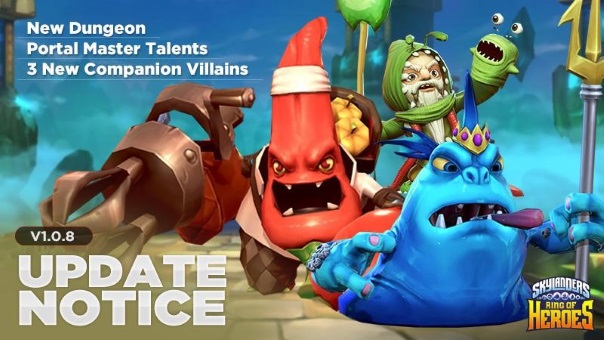 A new update arrived today for the mobile title Skylanders Ring of Heroes. The update will bring three new Doom Raider companion villains, as well as The Hall of Chaos dungeon. These three new companions join the villains roster, to ultimately help Portal Masters defeat Kaos once and for all. As they are all villain companions, they all have the Passive Skill “Deactivate Summoning” which will deactivate the summon after using a skill a certain number of times.

These can be found in The Hall of Chaos dungeon. There are two difficulties – Standard and extreme. The Standard version appears randomly when you complete any stage in adventure mode, and the Extreme version can be randomly found while clearing the standard dungeon. It can also be unlocked by leveling up the Chaos Level. The Chaos Level can be attained through clearing the standard dungeon. You are able to enter the dungeon once a day, or you can refresh it by using a Chaos Coin.