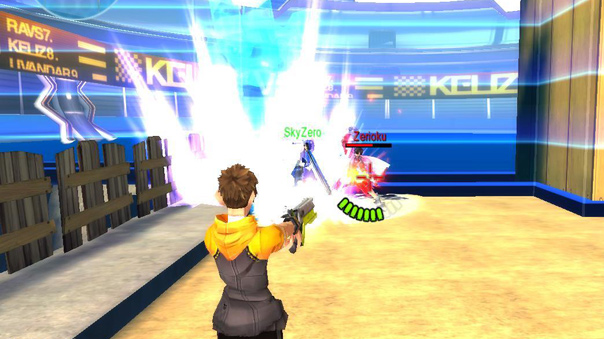 It’s funny how big MMO publishers Just copy each other, just as every publisher these days has a racing MMO every publisher now also their own shooting game as well. Aeria Games has Wolfteam, Nexon has Combat Arms, IJJI has Soldier Front, Gamers First has War Rock, Netgame has operation7 and now Alaplaya has S4 League. (updated note: now Aeria has almost all of them) All the small publishers have their own shooting games as well, but there are way too many to list here! Most of these MMO Shooters feel very similar to each other, but S4 League is genuinely different, it’s a sci-fi shooter. 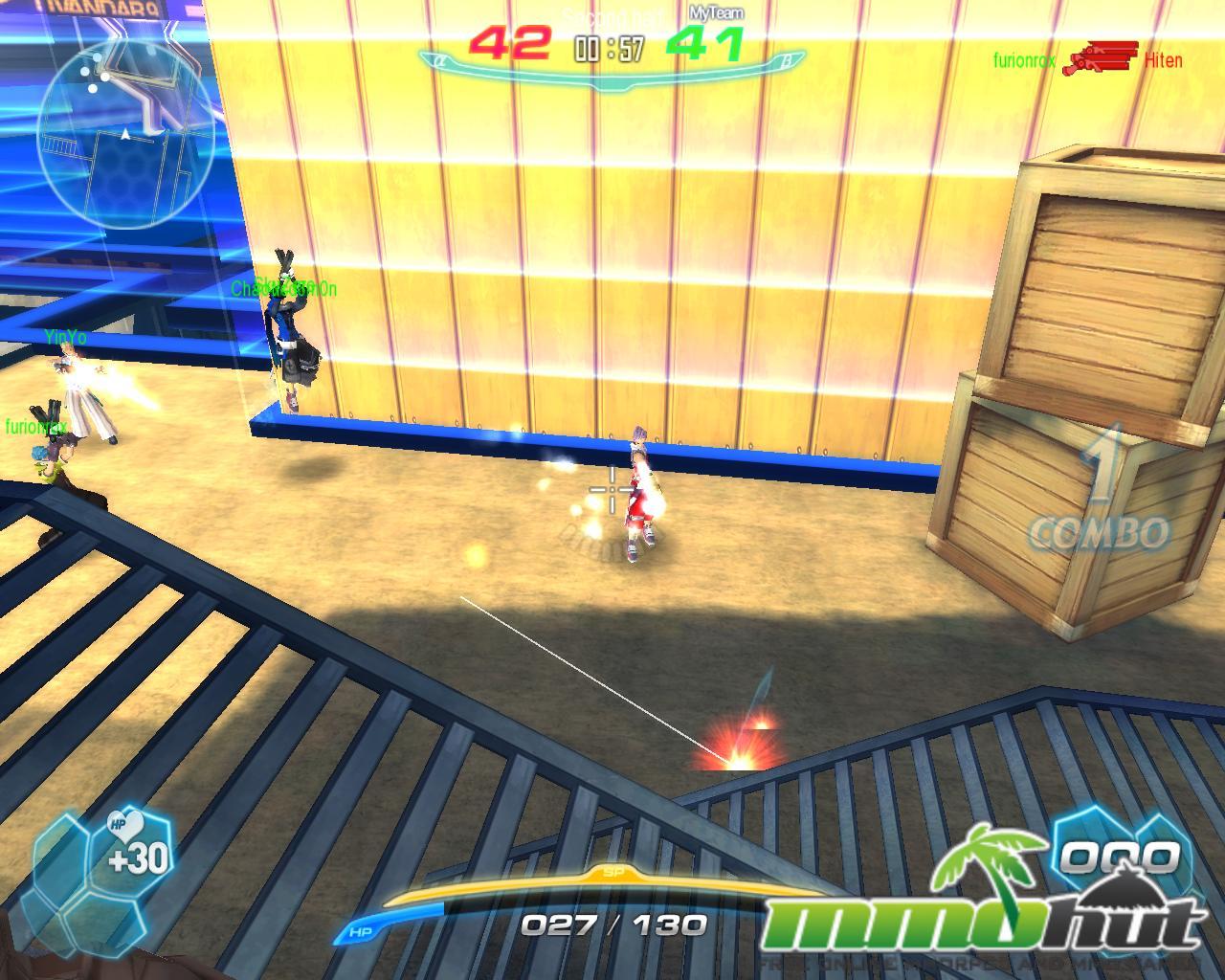 S4 League is a fast paced MMO shooter which got a lot of its jumping on walls and swordplay inspiration from GunZ: The Duel, a game published by IJJI. Although S4 League is a bit slower paced, it still feels a lot like IJJI’s GunZ. Blast away your opponents online with a large selection of guns or melee them with a plasma sword. The core gameplay in S4 League is fun and addictive with each match being broken down into two halves, with a small half time break in the middle. The half time break is sort of… random to say the least; you get to watch three robots dancing for 10 seconds or so. If I had to describe S4 League’s gameplay in a single word, it would be ‘polished’. Everything works as it should and the graphics are great to. The game even has its own original music that fits the fast paced atmosphere of the game.

Nicely varied
S4 League only a handful of game modes, but they’re genuinely different. The two most popular are Team Deathmatch and Touchdown. Team Deathmatch is pretty straight forward, one team versus another and the team with the most points at the end of the game wins. The problem with only having one Deathmatch mode is that even if you’re an incredibly good player, you won’t win if your team sucks. I have nothing against team based games, but it doesn’t make sense for S4 League to lack a regular free for all style Deathmatch mode. The second mode is Touchdown mode which is basically capture-the-flag, but with a small twist. Instead of bringing the “flag” or in this case, “a ball” to your own base, you have to bring it to your opponent’s base. Whenever a player picks up the ball, their stamina gets drained preventing them from running, which makes it incredibly difficult to actually make it into the enemy base without getting killed. The strategy in touchdown mode is to work with your team, because when the player who has the ball dies, he just drops it on the floor and anyone can pick it up from there. Trying to score by yourself is almost always impossible, because the enemy literally spawns in the exact place you have to try and get the ball to. I’m usually the kind of person that prefers straight up Deathmatch or Team Deatchmatch, but surprisingly, I actually enjoyed S4 League’s Touch Down mode because all of the touchdown maps are ridiculously small and putting 12 players in a small area is a recipe for fun. My only real complaint about S4 League’s content and variety is the extremely small selection of maps, which will hopefully be updated as the game matures. 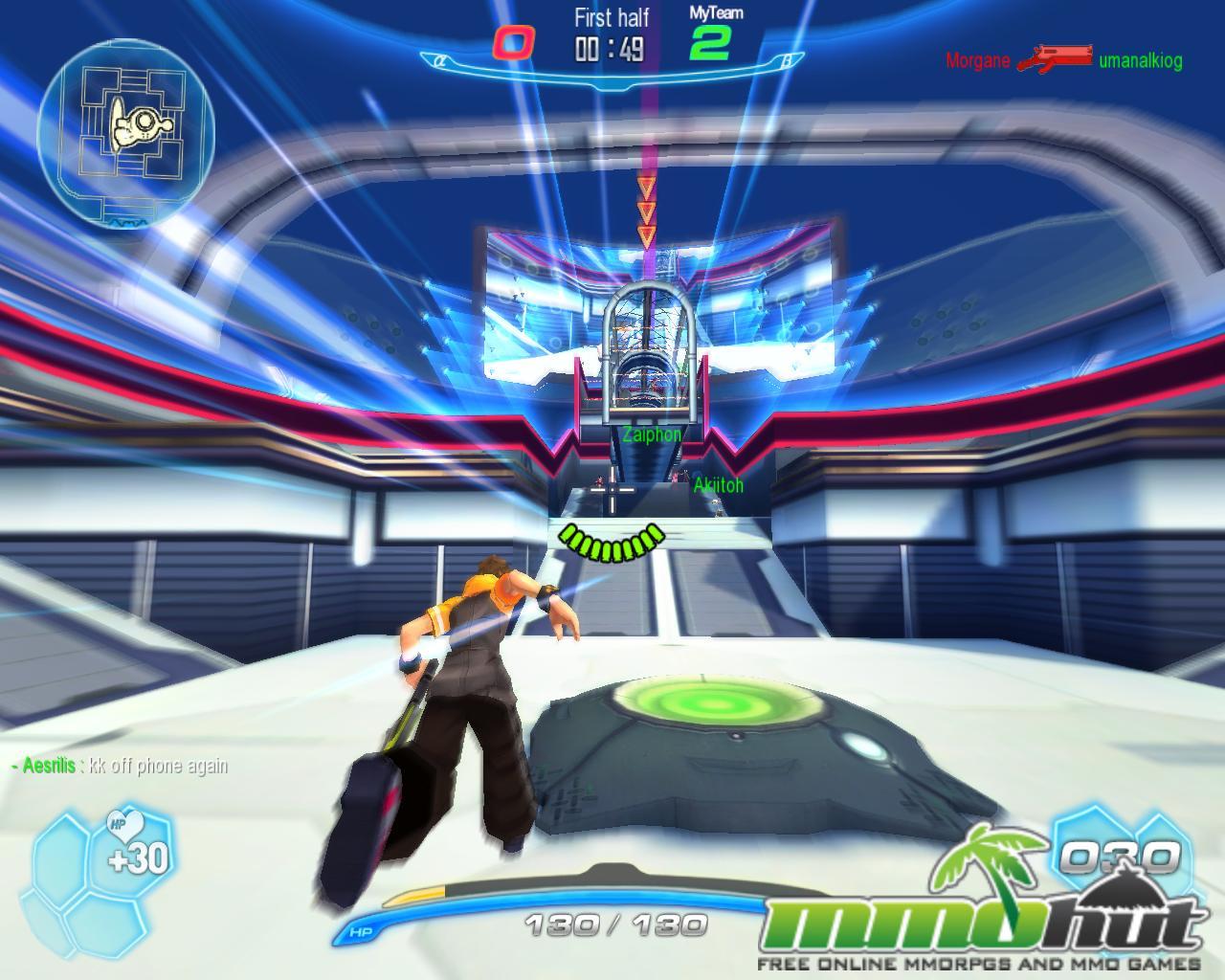 Why can’t other MMO shooters do this..?

One of the features I love most about S4 League is that the items you purchase in the store last for a set amount of hours while you’re logged in. That’s right, your items disappear only after X amount of gameplay, no more items disappearing on you if you took a break from the game. I’m sure if you’ve played other MMO shooters where your weapons & items disappear after a certain numbers you’ll appreciate how much better this system is! I can’t count how many times I’ve had to rebuy the same weapons in Nexon’s Combat Arms even though I only played for a few hours each week. 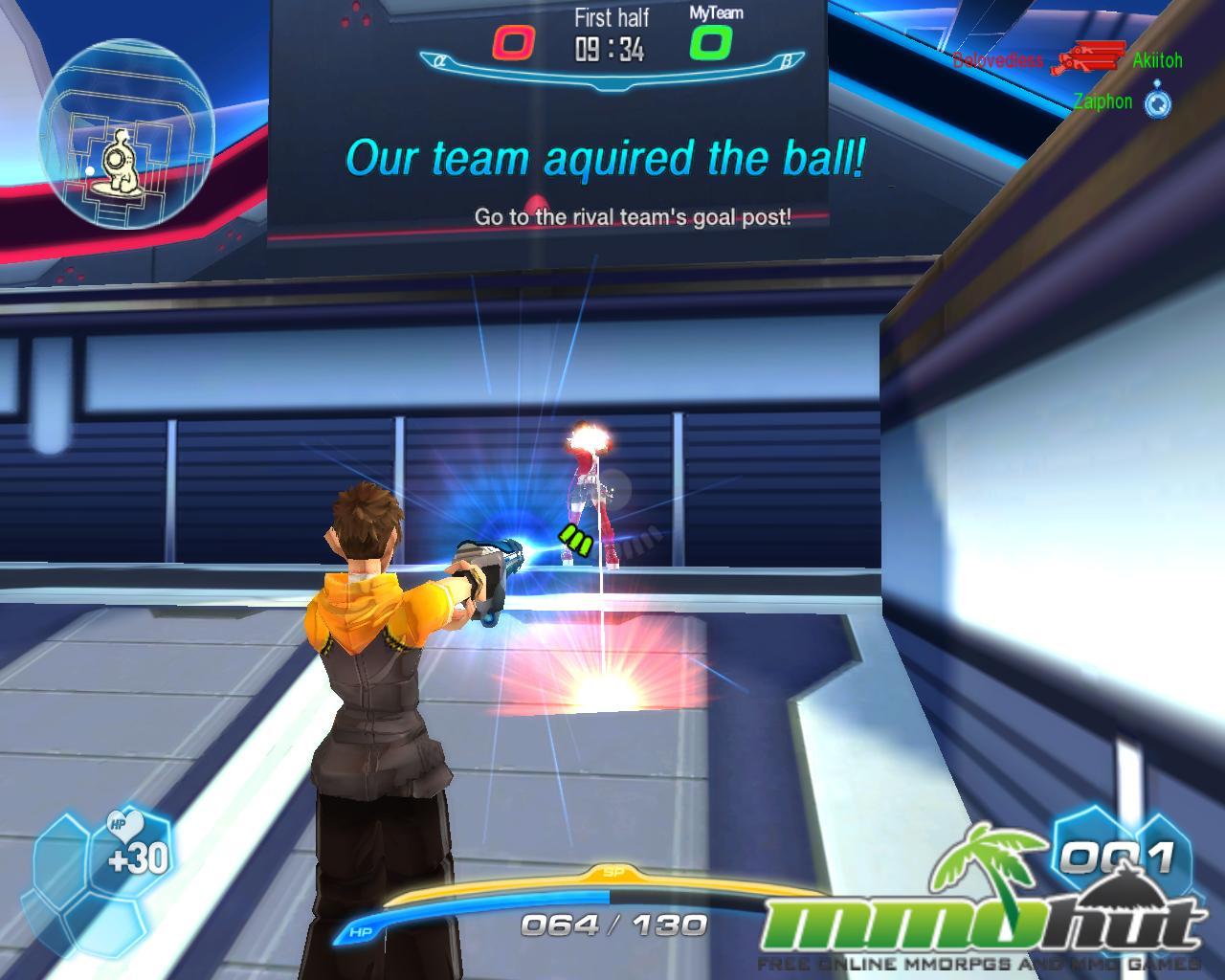 I need a LICENSE to use a weapon?!

In order to purchase and use new weapons in S4 League you have to take a license test, which is basically an extremely easy tutorial that explains how to use that new weapon you just bought. The good thing about the license tests is that they’re incredibly easy and after you pass them you get the weapon for free for a few hours to use in an actual game, and keep in mind, even if you log off at this point and come back on the next day you can still use the free new gun you got from passing this license test because the weapons only begin disappearing after being logged in for the duration of that weapon. Now, the downsides to the license tests are that they are unnecessarily dragged out. What should take a mere 20 seconds ends up taking several minutes. Feel free to call me impatient, but I don’t like having to practice reloading during every single license test, since reloading is always the same button! The license system is surprisingly well done though, because it ensures you know how to use your weapon before you begin playing online and the fact that it gives you the weapon for free for a few hours is great because if you decide you don’t like the weapon you didn’t waste any money buying it in the first place. 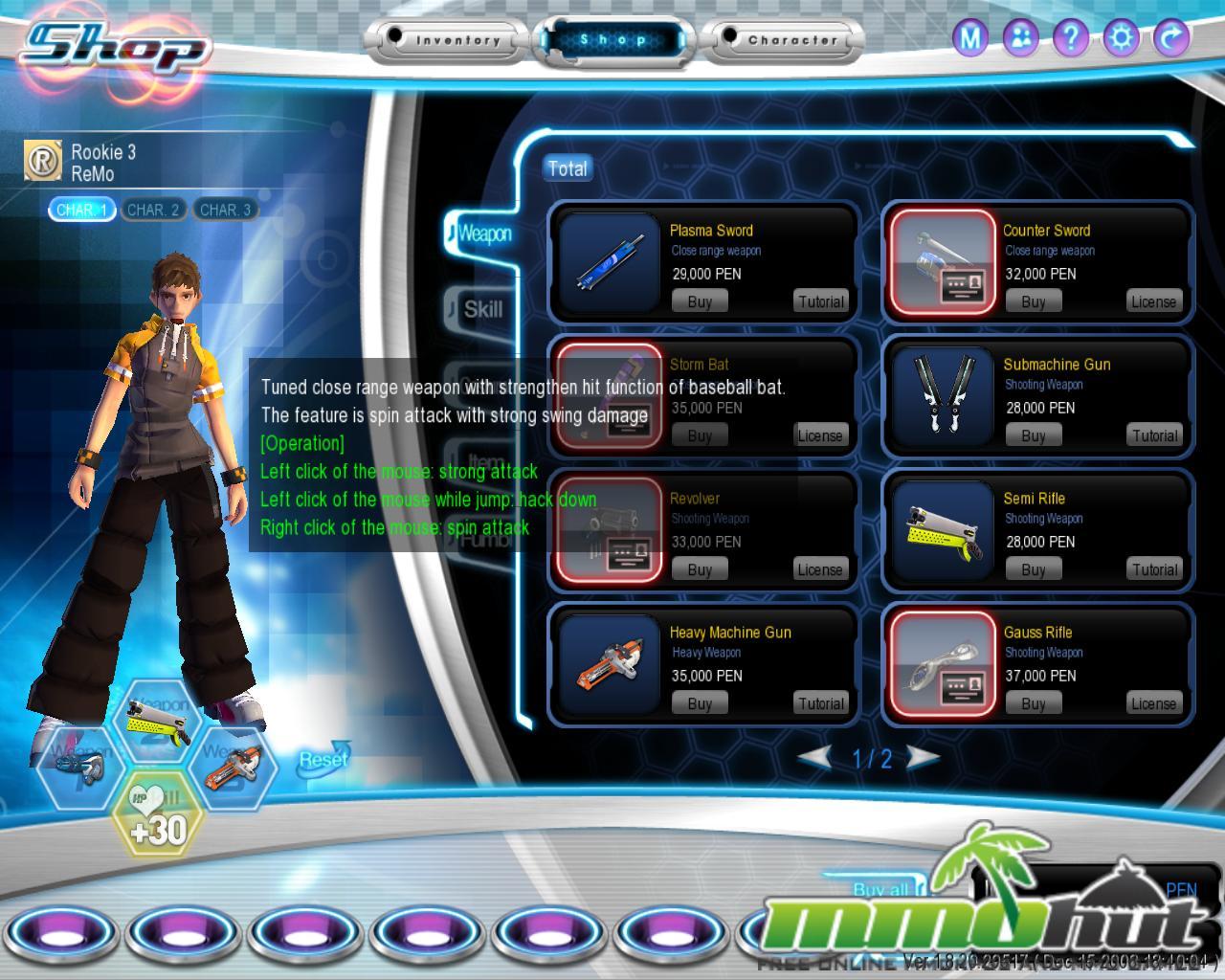 S4 League suffers from the same issue most MMOs suffer from, a lack of fun items to purchase in the game’s shop. The game has a fair amount of weapons and skills to purchase in the store, but lacks a variety of costumes to buy. To be fair though, Alaplaya has been doing a great job keeping the game up to date, but I’d love to see more costumes and equipment in the store. I simply don’t understand why publishers can’t put out more items that enhance aesthetics; it just doesn’t make sense to have only a handful of items. Hopefully, new content updates will remedy this problem.

Final Verdict: Great
S4 League is a genuinely unique MMO shooter in a world where more and more games are copying each other. The fast paced gameplay is fun and addictive and the game’s original music only enhances the game’s atmosphere. The only real drawback to S4 League is the few maps currently available and the poor selection of cosmetic items in the game’s store.