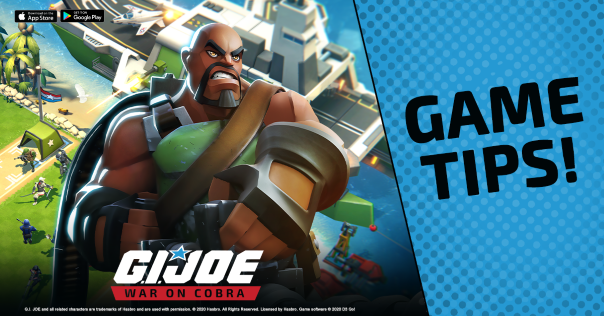 Official tips from the G.I. Joe War on Cobra team on how to win as a G.I. Joe!

Make sure to also check out our general tips, along with a special giveaway for new players who sign up through our link!

Put Your Tanks up Front!

Your enemies have one goal: to stop you from destroying their base!  Use Leaders like Roadblock in your squad to ensure that you have a tank drawing their fire while you deal with the traps and buildings standing in your way.  Roadblock also brings defensive support to the table with his leader skill Culinary Expert, that inspires his allies and reduces the damage they take.

Deal with Those Pesky Air Units!

Your opponents will try to outsmart you by building Drone Factories to assault your army from the skies.  Bazooka, armed with his… bazooka, will make short work of those drones as he destroys them from the ground.  Keep the skies clear and your allies safe as you carve your way through your opponent’s base to lay waste to their HQ!

Someone Call the Doc!

Always at the ready, Doc plays a key role in keeping your team alive.  Keep her behind your army and she will provide a steady stream of healing so your army can take any beating the opponent throws your way.  Rank up your Doc to gain more powerful healing that can bounce to multiple units and recover your armies health even faster.

Use Commands to Stay in Control of Battle!

Your opponent’s goal is to make it impossible for you to advance into their base, so use your Command Cards to shut them down!  Drop an EMP Blast into a cluster of buildings to disable them temporarily while you destroy them, or launch a Smoke Bombardment and move your army into the area to hide them in a cloud of smoke while you dismantle your opponent’s defenses.  These area of effect Command Cards can completely change the outcome of battle when used effectively.

Leaders Set the Tone of Battle!

Roadblock might be your go-to guy for being on the front lines of the action, but other leaders bring important abilities to the table that also greatly impact the battle.  Scarlett can temporarily take control of an opponent’s turret so it turns and fires on its own base, and Duke can call down air support to heal and increase the damage of your army.  If you’re able to get Snake Eyes in your squad, use his ability to call forth his wolf, Timber, to damage and stun buildings while Snake Eyes tears through your enemy troops.