If you’ve ever been to Excalibur in Vegas, Medieval Times, or even watched that cheesy movie A Knight’s Tale (with Heath Ledger), you have an idea of how exciting the sport of jousting can be. For all its straight forward simplicity – charge forward on a horse and hit someone with a stick, and whoever stays seated is the victor – there’s still something about the crunch of lance on armor that stirs the blood. Still, jousting is a rarely seen sport outside of fantasy dinner theatres and renaissance fairs, so Gameloft’s game Rival Knights is a slight surprise in the mobile market – a pretty, but unfulfilling surprise. 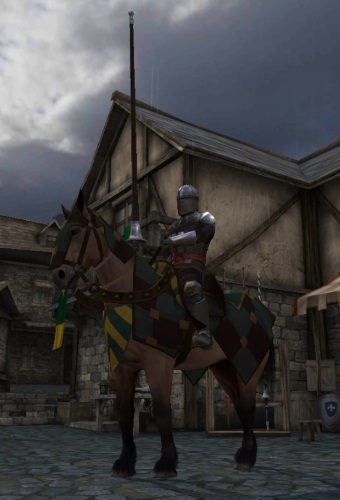 A Silly Boy with a Horse and a Stick

In Rival Knights, you play as a male knight entering in jousting matches and tournaments. Sorry, no boob plate here, but in fairness’ sake a jousting harness is too amorphous to make the rider’s gender distinct. You’ll start low in the ranks with only basic gear, and must joust to earn money and rise through the ranks. In standard RPG fashion, you must buy and upgrade gear to improve your strength in an ever upward push to the top. You can compete in either the PvE campaign, or compete in the regular PvP tournaments, but gameplay is essentially the same in both. A few special matches exist throughout the campaign but are self-explanatory. 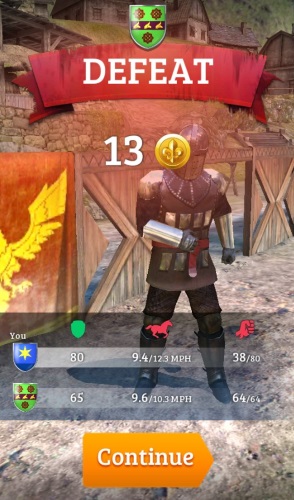 Jousting in the game is, in its simplest form, a ‘best of three’ contest across three key statistics: defense, speed, and power. Each is judged individually, and the jouster that wins two of the three categories wins the match (a tie is also possible). Defense is calculated solely from your helmet and armor, and is not affected by the joust itself. Speed is determined by the horse you ride plus the speed you reach in the match. Finally, power is judged by your lance and your aim on your opponent. 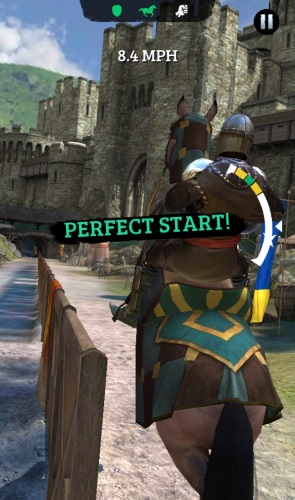 There are three active components to each match: the start, the gallop, and the strike. When the joust starts a countdown appears on the screen, and tapping the screen when the word ‘Go’ appears grants a Speed bonus. The gallop then immediately begins, and utilizes a precision mechanic on an arch. Tapping the screen in a white, yellow, or green zone will grant acceleration based on how closely you fall into the small green zone, and as you gain speed, so does the acceleration arrow, making the last taps the most difficult. After several acceleration boosts, your camera will shift and time will slow down as your opponent comes into view. The screen will highlight a specific target on your opponent to strike, and you must drag your finger on the screen to direct your lance to that target. The closer you are to a perfect strike, the smaller the circle; green indicates a perfect hit like other game elements. You will only have a few seconds in this slowed time before you and your opponent strike, so you must be accurate and swift to properly strike your opponent and knock him from his horse. 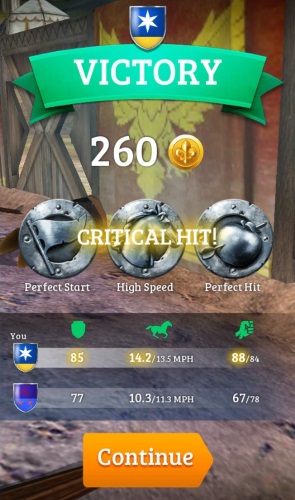 The entire joust takes only a minute to complete, so there’s no time wasted. When it’s complete, the joust’s results will be calculated, including bonus medals that can be earned for a perfect start, for reaching top speed, and for hitting a perfect hit. These will increase your scores and rewards. You’ll still earn a small reward if you lose the joust, so your time and energy isn’t entirely wasted. That said, energy is more precious than you realize, so do your best to avoid losses.

Harnessing the Power of Metal and Hoof

There are five pieces of equipment that you may purchase and upgrade: helms, armor, horses, lances, and emblems. As mentioned earlier, helms and armor contribute to defense, horses to speed, and lances to power. Each of these categories has multiple items that may be purchased (although you can only ever equip one). Some items will cost gold (earned in matches), some will cost gems (the cash shop currency), and some must be unlocked through the campaign. Additional bonus items may be rewarded for participation in the PvP tournaments. Each item can be upgraded with gold through six tiers. However, the sixth and final tier is temporary and considered “charged,” and may only last a few matches before needing to be charged again. 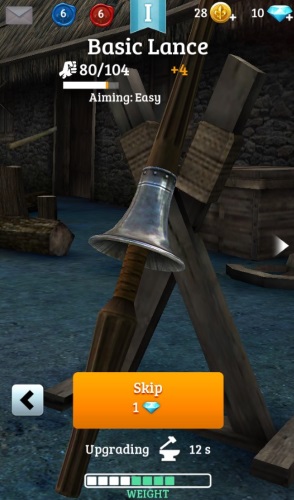 Discovering which piece of gear is best to buy, and choosing when to upgrade existing gear or to buy a new piece of gear, proves complicated without outside assistance. Upgrades become quite costly and also take a good deal of time to complete, during which you can still use the equipment but cannot benefit from its upgrade. Without purchasing additional upgrade slots, only one piece of gear can be actively upgrading at a time, meaning that it may take hours for your entire set of gear to complete a round of upgrades. In addition, weight is an important factor. Each horse has a certain weight limit, and each helm, armor, and lance has a given weight. You must stay within your horse’s limits, which means you must also balance your upgrades across all four categories. 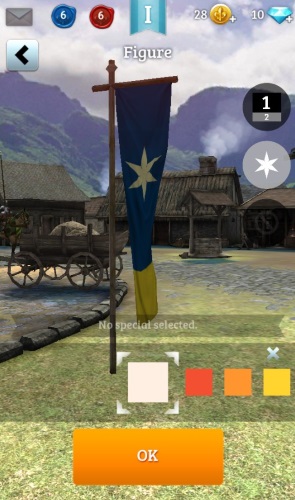 Emblems, meanwhile, are mostly cosmetic but can offer a slight additional perk in any area. Like standards in Diablo III, you can choose patterns, colors, and emblems to represent you in each joust. Most of these patterns and emblems must be purchased or unlocked via achievements. However, secondary emblems offer a variety of small boosts, such as improving perfect hit chance, offering upgrade discounts, or faster energy regeneration. While you may care little to waste precious gold on your colors and standard, it is worth your coin to purchase a boosting emblem which can serve you for a long time to come.

Rival Knights is a beautiful experience, graphically speaking. Rendered fully in 3D, with realistic models and detail, it’s no less genuine than Mount & Blade. There’s also nothing quite like it, and so it’s easy to buy into Gameloft’s initial hook of a fun jousting arena with quick matches and pocket-sized eye candy. Alas, shining armor cannot disguise three major issues that quickly flatten the game experience. 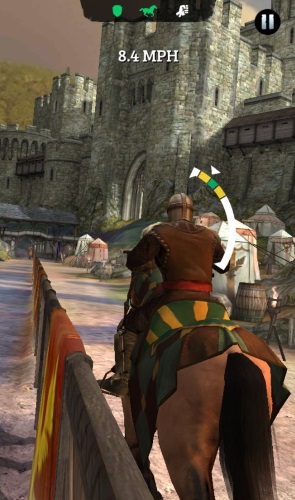 The first of these issues is the gameplay itself. While it may have taken all the words above to summarize Rival Knight’s mechanics, they’re all the game has to offer. Jousting is incredibly repetitive. The ‘perfect start’ tap will always be on the same beat, and while a horse’s speed and your strike target will vary, the short experience of the joust is without variation. After a few hours of play, jousting will feel as exciting as data entry. Long upgrade times, the inability to repeat previous matches to earn gold (outside of limited training matches that appear), the high cost of equipment versus the rate of earned gold, and the lack of any customization besides your emblem only make the experience even more mundane. 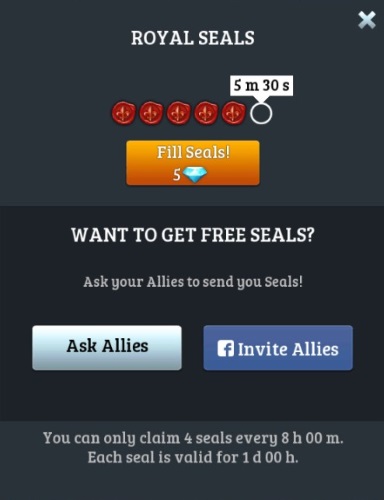 The second trouble of Rival Knights is its energy system. Mobile and social gamers can bemoan this system as much as they want, but it rarely disappears: limitless play simply doesn’t appeal to industry businessmen who see profit in forced time-outs. For Rival Knights, however, this limit is staggering. You have two forms of energy, Social and Royal Seals. Social seals are used only for PvP tournaments and friend challenges, while Royal Seals are used for the campaign. Players start with a mere six seals of each type. Recall that each match takes about a minute to complete; this means that – when estimating widely – a player can use up their entire energy bar in fifteen minutes. Each seal then takes six minutes to recover. In rough math, that means you can play through your entire energy bar, plus regenerated seals, in about 20 minutes, but must wait over an hour for your seals to fully recharge. You can, of course, use cash shop credits to refill seals, and you may also ask friends through Facebook for more seals. This may seem like a fair exchange to some, but I’ll simply conclude by saying that energy that takes six times as long to recharge as it does to use is excessive.

The third and final issue with Rival Knights is its cash shop system. At roughly 5 gems per $1 USD, cash shop equipment ranges from $3 to $15. Boosts, which can be purchased at the start of the match (and only last for that match) will also cost about $1. Seal refills cost about $1. Considering free gems are not easy to earn and that cash shop items are far superior to their coin equivalents, a cash shop advantage forms for the PvP tournaments, especially the Eschelon, which ironically offers the most efficient route for earning free gems. Who would have imagined the rich would keep getting richer in Feudal Europe? Granted skill can help overcome small power gaps and gear is limited within tiers of power, but when you’re trying to keep 4+ tier sets upgraded and viable to have a chance at surviving the tournaments, the time investment to stay competitive will start to grind your nerves. 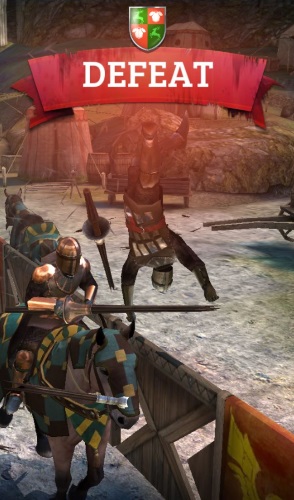 It’s difficult to rate a game that looks so well designed so low on our scale, but the overall experience Rival Knights offers – despite its external polish – is below average. It isn’t simply about a cash shop imbalance or slow energy recharge rates, which might be forgiven for an exceptional game. The real problem with Rival Knights lies in its droll gameplay. There is no increase in difficulty, and no strategy for winning: only a basic skill and rhythm that can easily be learned after a few matches of play. Rival Knights is simply too basic, and too limited by its business model, to warrant investing time in the game. While you may get some kicks in having it on your device and playing it when the mood strikes, there’s simply no glory in this joust.