Namco Bandai, a legendary game developer and publisher, known for such titles including Tekken, Ace Combat and Pacman, are now breaking into the F2P scene. With their recent outing of turning the Tekken series into a F2P-viable game, they’re now looking to give their Ridge Racer series the same treatment with Ridge Racer: Driftopia, a F2P version of last year’s previous title: Ridge Racer: Unbounded. While the idea sounds good on paper, after several hours of play, I have come to the awful conclusion that this game, in its current state, is quite possibly the worst example of how to structure a F2P game ever. 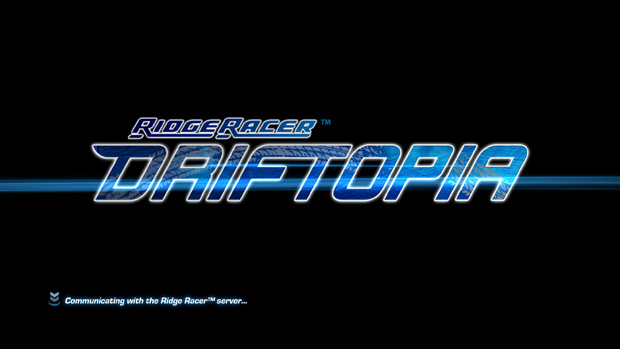 For starters, the game begins with a simple tutorial that explains the features through a few menu screens. Understanding how the game works through this tutorial is easy enough, but an interactive tutorial should have been offered on how to properly handle the game’s racing mechanics, especially for those that have never played a Ridge Racer game, or any kind of racing game before. Because of this, it generates a chain reaction of flaws for new players.

Ridge Racer: Driftopia currently has very limited content, which is to be expected for a beta test, but it lacks a certain game mode that really should have been included from the get-go: ACTUAL online multiplayer. Currently, the game features no live competition among players. Instead, the game offers “Spirit races” where you race against other player’s ghosts, which doesn’t make for a proper substitute since you’ll almost always be paired up against racers with cars that are more powerful than yours.

Speaking of powerful cars: The game allows you to upgrade and improve your cars through a simple EXP system: Earn enough EXP from completing races and you’ll earn levels and car points which can be spent on improving your car’s top speed, acceleration, boost power and strength. There’s also skill cards you can apply to your car that give it a temporary passive ability including increased boost meter for drifts or increased scored for collateral damage, but these can only be used once per completed race. 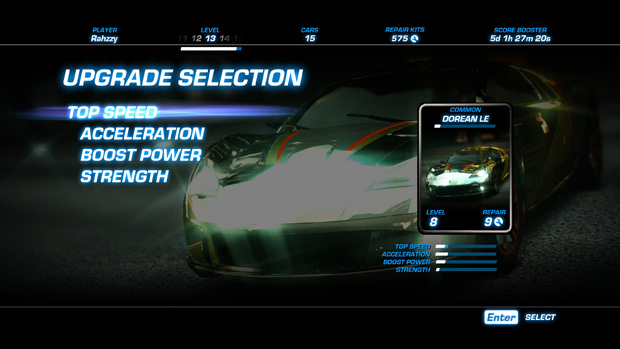 Rather, it plays very similar to high octane, arcade-style racing games such as Burnout or Flat-out, where players are encouraged to smash into obstacles and into other racers. Just like any other racing game, players compete against each other to see who can complete their run in first place.

The Ridge Racer series has been known mostly for its drifting mechanics, although being fairly unrealistic, and that feature is still present in Driftopia, but it has been altered to feel more like a powerslide rather than a drift. The drift mechanic is simple to perform, being initiated by pressing spacebar, but the resulting chaos is difficult to handle and nigh impossible if riding in a low ranking car. 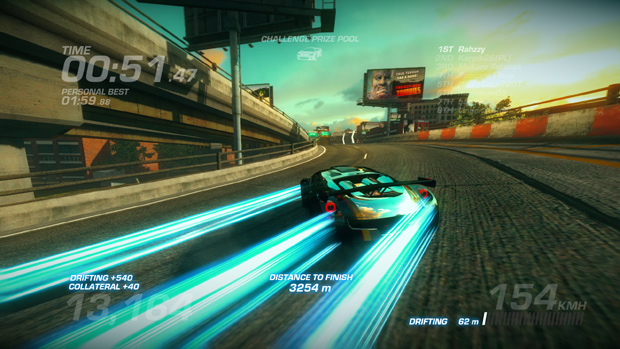 Players will also have to drift, chase, go airborne and cause a ton of collateral damage in order fill up their boost meter and power their way throughout the race. While it seems like a recipe for fun, it’s actually not quite as exciting as it sounds, mainly because the mechanics feel plain and do not bring anything new compared to other arcade racers. While the core gameplay of Driftopia isn’t particularly bad, it simply doesn’t feel like a Ridge Racer game.

I can understand why Namco Bandai would want to pull the series into a bold new direction due to its stagnating formula, but at the cost of losing what made the series recognizable in the past will certainly not hold up well for long time fans. 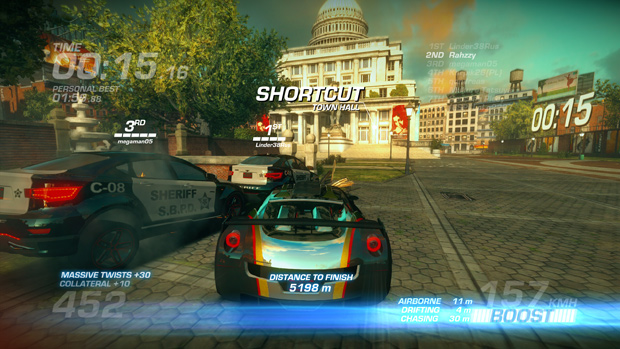 There are so many other problems that the game suffers from. The biggest problem here lies with the game’s “Repair Kits”. Now you see, every time a player crashes during a race, the race will automatically end. After that, players can chose to repair their vehicle with a set number of kits. However, if a player chooses not to repair their vehicle, it means that they’ll lose that vehicle permanently, along with all the progress they made on it. Players are going to have to stock up on a ton of repair kits if they wish to keep playing. The way that players go about getting repair kits is by either completing races or earning them as a random card prize, or by simply purchasing them from the in-game store. Earning free repair kits is a slow and daunting task, so obviously the in-game shop will be the best way to get these kits, with the DIY repair kit pack costing .99 cents for 50 of them. 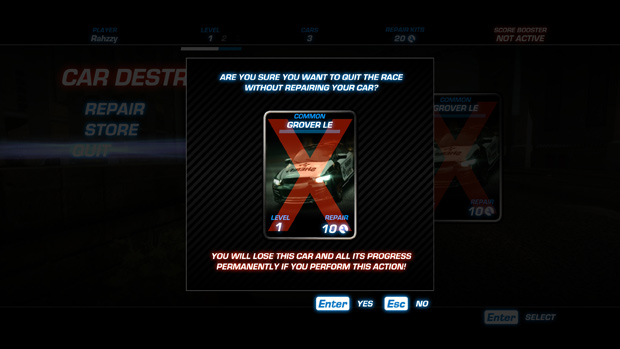 The whole concept of charging players to play per crash is just absolutely ridiculous. As a new player, you’re going to be crashing CONSTANTLY, no matter what. (Hell, even as an expert player, you’re going to be crashing more often than not.) Sure, the game gives players free cars and repair kits every 24 hours of logging in, and anyone can afford .99 cents worth of repair kits from digging around in their couches, but this is such a huge turn off for anyone that’s new to the game AND wishes to play the game without paying a dime because they’re simply not going to be playing a session for very long. 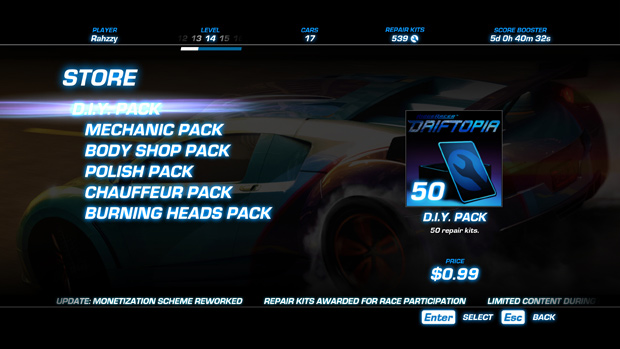 Oh, and don’t get me started on the other things that can be purchased from the shop, including score boosters that increase your score by a set amount. Since the game in its current state is simply about going for the highest score to earn bragging rights, this can easily be seen as a method of paying to win. Other than the game’s monetization issues and ungraceful gameplay, the game doesn’t have much to experience at the moment, as there are only eight race tracks available. (the Steam account lists there are now 10 tracks but we have not confirmed) 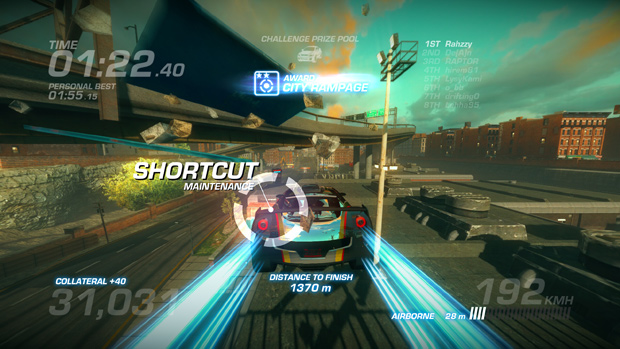 If I were to judge Ridge Racer Driftopia as a legitimate addition to the series: It’s quite a disappointing experience for fans of the series.

If I were to judge Ridge Racer Driftopia based on its own merits: It’s barely up to par of being okay.

Other than the game’s monetization issues and ungraceful gameplay, the game doesn’t have much to experience at the moment, as there are only eight race tracks available. As it stands, I’m giving Namco Bandai the benefit of the doubt, as they’re still new to the F2P market and obviously have more content in mind for the game before it launches soon for PC and PS3. While everything in the beta test is currently free to try out, including items from the cash shop, if they don’t figure out a more sensible way to monetize the game, I cannot see this game surviving for very long in the F2P market.