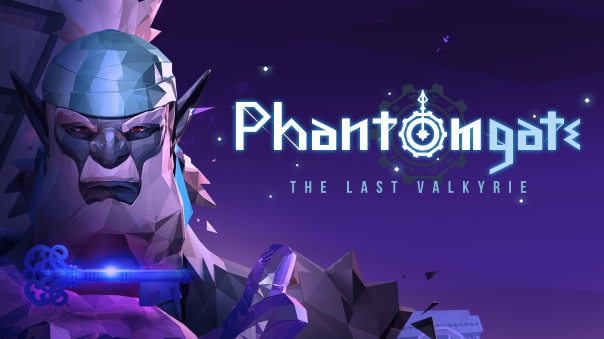 Netmarble’s latest mobile creation,  Phantomgate,  is really something interesting. It’s a mobile puzzle platformer that’s also a turn-based RPG, with a pair of different Gacha Elements attached to it. There’s also a PVP arena, but the primary focus is on the PVE story mode. Odin, the Mad God, father of Yggdrasil has hidden the body of a powerful Valkyrie, Renata, mother of Astrid (the main character). There are four other heroes you unlock as the story goes (Tia, Ragna, Bjorn, Olivia) that come to you as the story stages are completed, but Astrid is the central focus of the game. Your ultimate goal seems to be to defeat the Mad God Odin and rescue Renata, and while visually it’s lovely, the music is amazing and the combat is solid and easy to get into, there are some points of contention.

As far as Puzzle RPGs go, Phantomgate’s a pretty unique one. I do get some serious Child of Light vibes from the platforming, and being paired with the mobile-style team on team battle is a really nice touch. The flow of the game is simple enough: You pick a team of spirits, and select a chapter, and then a stage. Each stage is broken into a few parts, at least two. That’s where the platforming comes into play. Your goal in these stages is to get three elemental runes and make it to the end. At the end of each stage comes a boss battle, and you’ll run and jump across moving platforms, avoiding dangers, finding flames, levers and other contraptions to make it through the puzzles of the stages. But you can take damage outside of battle from falling on icicles, being hit by them from above, explosions and other dangers. Not to mention that each of these stages is visually stunning, and the art of the characters, from the heroes, monsters and huge bosses all stand out in a serious way. 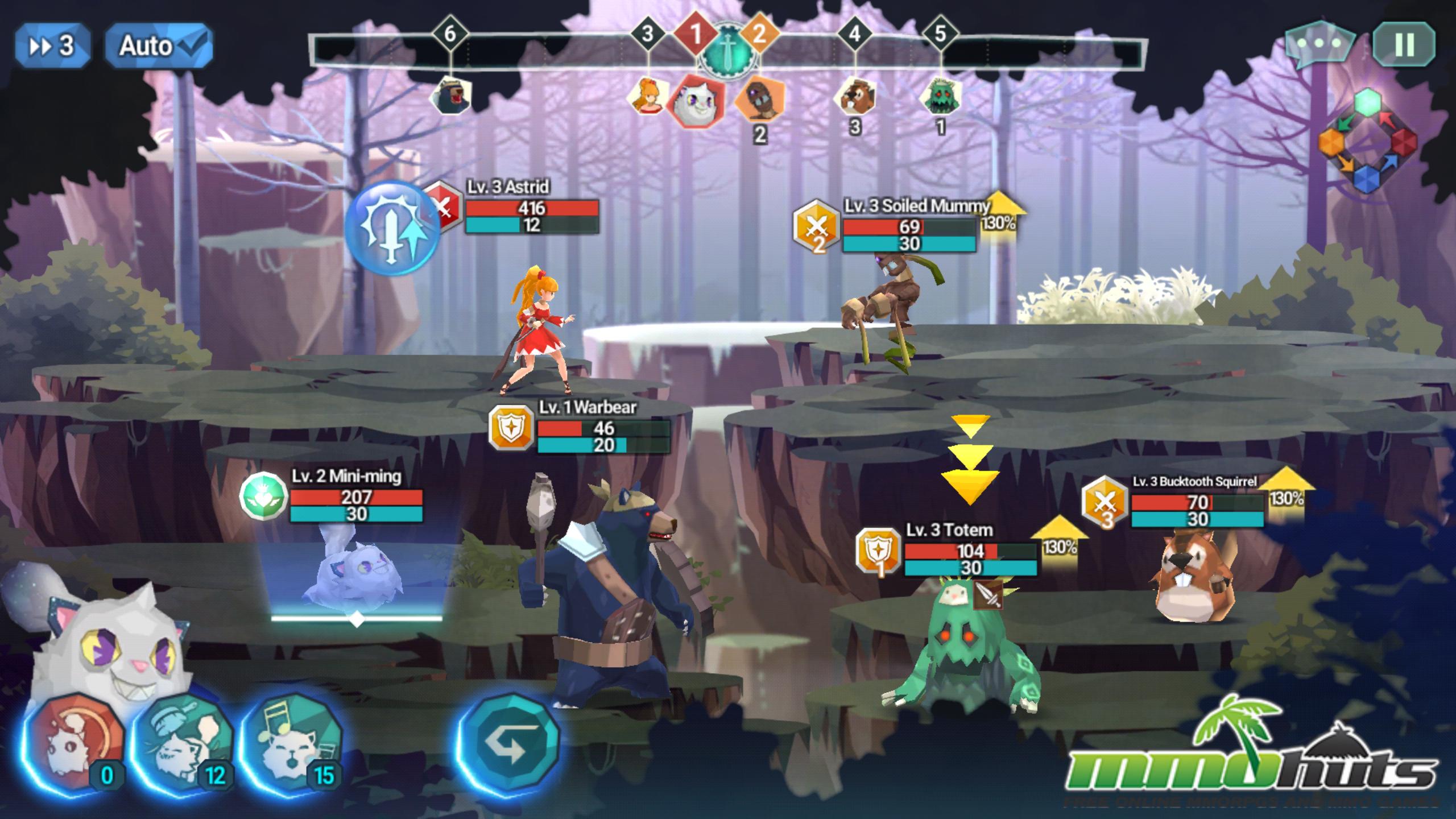 Combat is never dull, that's for sure.

Battle is nice and simple: You have your team and the other team. The top of the screen shows a pair of bars with icons representing each character. As the battle progresses, these icons move, and when it hits the middle, it’s that characters turn. Each character in your party has a trio of moves, and if you press your finger over the button it says what it does. Phantomgate also uses a standard element wheel, with each element being stronger vs. the element in front of it. When it’s a character’s turn, if they deal more damage to an enemy, you’ll see it in the form of a yellow bar that says the percentage of damage you can expect. The goal is to wipe out the other team, and so you’ll want a nice variety of characters. As the match progresses, you’ll occasionally see some bubbles float down. The ones that fall on enemy side are debuffs, the ones on your side are buffs. You can also get a slight advantage if you hit the enemy on the map from behind, so try to leap over or get the jump on them if you can.

In addition to that, you’ll collect Memory Soul Fragments (little purple gems), in each stage. That’s the main goal a level. The enemies are visible on the map with red names/levels, and friendly NPCs that give quests will have green names. The Phantom Soul fragments will seem a little familiar; that’s one of the items you use out of battle. Phantom Souls (purple shards) are items that help you level up your characters faster, but your party cannot out level the party leader (Astrid in my case). I will say that I have never run out of Phantom Souls. It’s very easy to keep your team at the level of your hero. You’ll probably need to do some grinding if you want to have a powerful party, and you will get items to auto-clear stages through achievements and such. Going through stages is key to getting shards to improve current spirits or to summon new ones. That leads me to the next portion of the game: buildings. 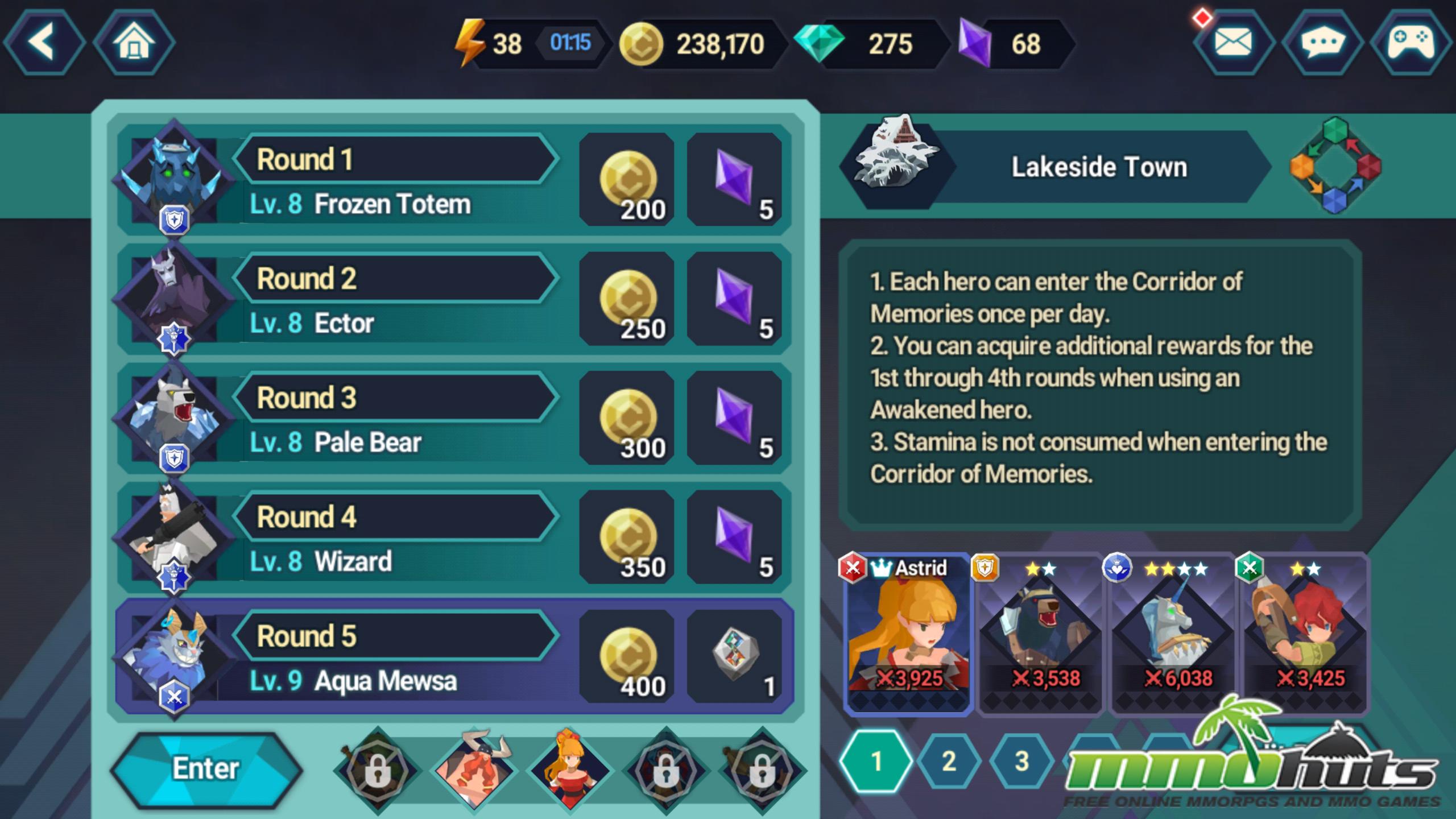 You can only grind Corridor as many times a day as you have heroes. Get to grindin' those chapters!

As you progress in the story, you’ll unlock more buildings in your main menu, which will let you perform summons (for shards of characters), one that lets you pull more Phantom Shards (used for leveling up characters), or simply go through a battery of stages once a day for shards and exp (Corridor of Memories). The Corridor is probably the most useful and important of these, but you can only go through a Corridor once a day. There is a catch though – the more main heroes you’ve unlocked, the more Corridors you can go through. These are important to grinding, and I’m grateful that there’s no way to spend real money to unlock these again. You can also PVP against other teams of characters, and now we have to talk about the most important part: money.

You have two summons, one for equippable gems, but the major one is “Essence and Items Summon”. Essence are shards of a Phantom/character, and this is one of my least favorite types of character summon. Instead of simply getting a character for summoning, you get “Essence” of them. When you have enough, you can create that Phantom. If you spend Gold (in-game currency) you get Items and Essence, but mostly items. I seldom received a shard for a character and when I did, it was just one or two. That’s great if you’re upgrading a character, but for summoning? You want to use Gems (real-money currency). You receive some through achievements and the like, but the primary method of getting Gems? Real money. All of the rare, incredible, OP characters are found in the Premium Summon, but the fact that you don’t even get enough to summon one of those rare high-tier characters in a x10 summon was really disappointing. I spent ten dollars in game and while I didn’t get anything overpowered, it did give me one or two characters that were terribly powerful, above what I could get in the game at this point in the game. I detest shard summon gimmicks, as it feels a little on the greedy side and is much harder to get great characters unless you’re lucky.

Who knows how much money it'll take to get a high-tier creature?

Not to mention you’ll want more Essence of a creature you’re using for purposes of evolving and increasing their power. With the right amount of gold and Essence of a character, you can increase their star rating. When you cap those stars with gold stars, you can use Evolution Stones to take them to the next level. You can get those from stage rewards and regular summons. Those in and of themselves are not hard to get. It’s the shards that can be tedious. Completing stages tends to grant shards of the enemies you beat (or at least a chance for them to drop), so now you have to farm. Without the auto-complete items, you have to go through all of the platforming segments again. While the platforming is fun, when I’m trying to grind, I just want to complete battles, and I can only do that once per day. I enjoy this game, but it does feel gated to slow down progress. 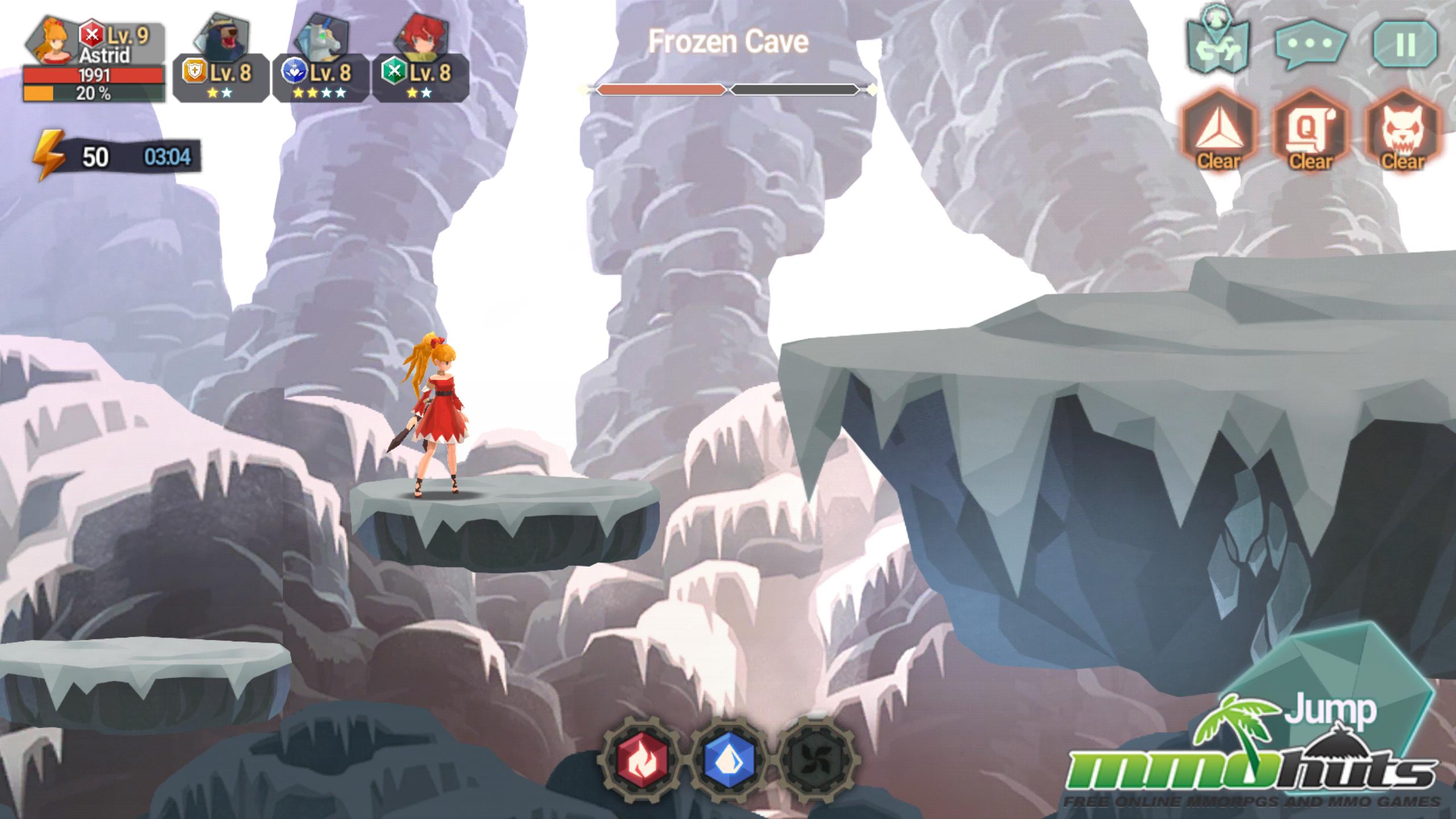 Running, jumping, flying, solving puzzles. The platforming aspect of the game is top notch, as is the battle.

I adore the story for Phantomgate.  It’s got just the right amount of dark edge, and a spark of hope. The gameplay is fun, the platform puzzle elements are engaging, but I intensely dislike “shard” style gacha, making it even harder than normal to collect the powerful characters you want. You don’t need them to play, but if you want to play against other players in the Arena, you will want more powerful creatures, which means spending money, or farming achievements/missions, in the hopes you have enough gems and get the right Essence. The game itself is fun, and there’s lots to see and do. There are daily logins, achievements, missions, plenty of ways to get rewards, but the game itself makes it much too tedious to acquire the really high-end characters. So unless they’re available in later story missions, which I doubt, you need to spend a lot of money to get the really good stuff. Aside from the standard mobile Gacha, the actual gameplay is incredible, and for someone just looking for a good story with terrific characters, it’s right up your alley. You don’t really need to spend money to play the regular PVE, but it will make it go just a little bit easier.