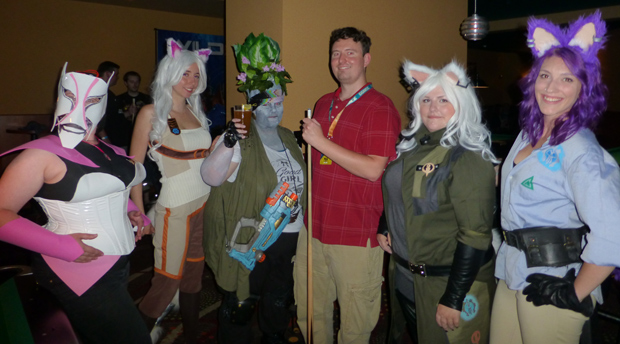 As many fans of WildStar have heard the news by now, Carbine Studios has admitted the limitation of their resources and slowed the suicidal push of monthly content back a bit to instead focus on balancing and perfecting what is present. While this means we won’t be seeing a new update for a couple months, when it does drop you can expect a super duper ultra cheesecake drop. This will include balance changes, particularly focused towards PvP, an expansive amount of new story, a heavier focus on catering towards the solo player experience, and bug fixes galore. The details of these fixes are likely a better job for one of their signature 70 page patch notes, so I’ll just stick to the lore and dungeon bullet points to keep this write-up under an essay in length. Oh and heads up, there might be a few spoilers ahead. But considering I’m talking about things I haven’t progressed into the story far enough to fully understand, I promise they will be minor. 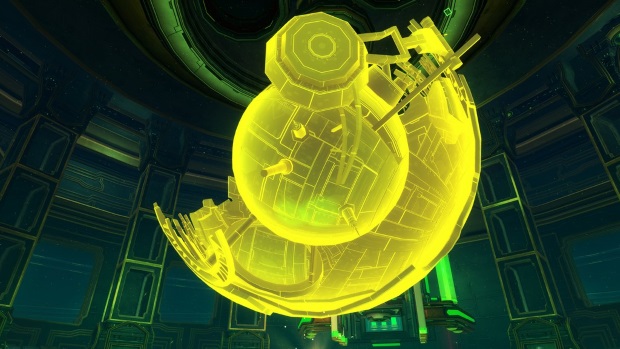 The Defile update focuses on the continuation of the containment story realized in the Strain expansion, WildStar’s first post-launch content drop. Essentially the Eldan weren’t as short sighted as the green datacubes have repeatedly led me to believe, and have enough safeguards in place to put a lid on the spread of corrupted bio-organic life forms rampaging across Nexus. A new zone near the Guardians of the Grove level 20 public event released previously in the Strain content drop will fill players in on how Drusera is utilizing the defensive Eldan technology to take the fight back against the Entity, her seemingly corrupted counterpart. Though the preview draft we were shown has Drusera looking like there’s a terrible secret she has yet to reveal. Time will tell. 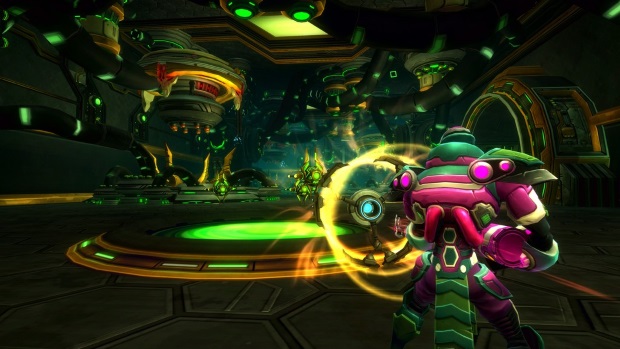 In terms of public content, you can expect the battle for control of elemental focuses to get far more intense. Content will take place around these new warzones as players will take to the skies in a 20 man carpet bombing public event to cut off corrupted spaceworms that make the monsters from Tremors look tame. This culminates in a battle with a Strain corrupted edition of Stormtalon bringing a new nasty bag of tricks, a much smaller region to fight in, and even a cocoon ability to regeneration his health and force your team into some sticky situations to prevent from happening. 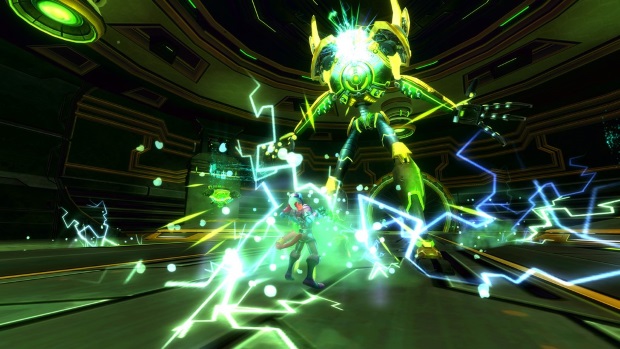 Those looking for content more friendly to a single party can take on a new epic construct at The Black Focus, where the Entity’s minions are attempting to harness a corrupted edition of each of the elements to begin building their own vision of the world. With the assistance of Drusera’s help you will put your Pokemon knowledge to the test as you have to counterpick elements against the construct who will constantly change his attack pattern depending on which corner of the Black Focus he comes in contact with. As a PvP player, I was stoked to see this addition and hope to see more like it as it helps push players into the open world where faction sabotage can happen more often. A full cutscene and unique housing trophy awaits those capable of defeating the new boss so best of luck. 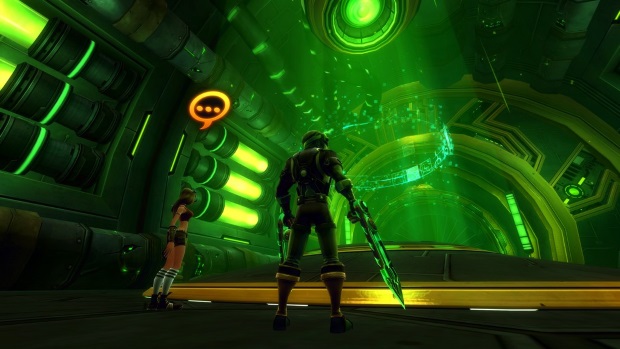 Speaking of Drusera, WildStar is taking advantage of this extra production time to get on the voiceover bandwagon. More quests going forward will be fully voiced with actual quest dialogue rather than generic ramblings specific to the character personality. For a game as heavily vested in its story as WildStar, it’s a very smart move on their part to get this going now rather than a few years down the road when their content is rivaling even World of Warcraft in scope. 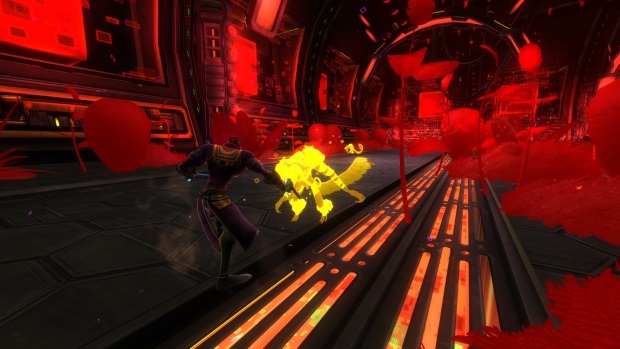 As you might expect, the majority of the new zones in Defile are single player focused. Explorers can expect some vertigo inducing launch pad filled super jump quests to truly show their skills. You can drop into the mouth of WildStar’s take on the Star Wars Sarlaac with a fun explorer/soldier path mini-dungeon as you literally take the fight to the heart of the problem. Though the real story is the inclusion of a fully voiced over super challenging solo player end-game delve into the core of Omnicore 1 – The Caretaker’s mainframe. 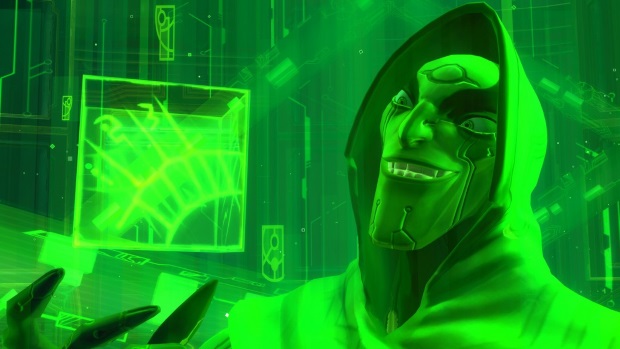 Omnicore 1 – The Story Behind the Raid

If you’re familiar with WildStar’s raids, then you know all about the Omnicore 1, a truly vicious forty man gauntlet filled with randomized boss battles, team coordinated jump quest trials, and mini-bosses that are as much puzzle rooms as they are raid content. But if you tend to shy away from that militarized raiding content community, you might never have gotten the chance to experience the ultimate battle to free the Caretaker, Nexus’ personification of the universe’s ultimate super computer, from the Strain inspired Avatus virus seeking to usurp his controls and knowledge. Well thanks to the Defile update, you will have the chance to play out the lone supporter sent in to deliver the finishing blow to Avatus as the events of the raid play out all around you. As you port into the virtual world, you nearly face deletion until the large presence of the raid team causes Avatus to dismiss you as an insignificant threat in the overall scheme of things. 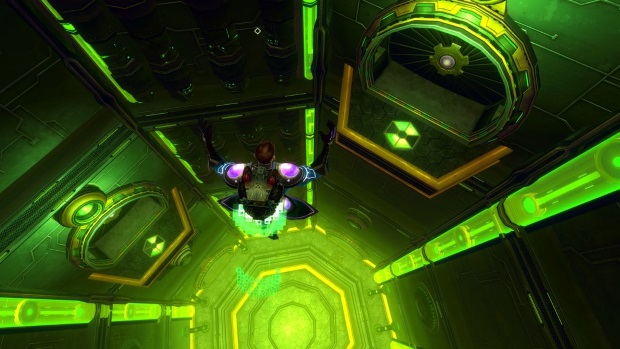 This is something unique in an MMORPG that only a team in love with its lore would ever take the time to put together, and every piece of it feels some kind of wonderful. Don’t mistake this for an interactive novel though as your solo expertise and mastery of your character is going to be pushed to the test across all levels of player skill. One particularly brutal room previewed could only be described as Frogger on Acid. You must leap across a long series of moving, decaying, and occasionally exploding platforms to reach the opposite side of a chasm. These platforms are rocketing around though so expect to feel the full force of WildStar’s physics engine as you take running leaps of faith to keep one step ahead of the disappearing platforms. And then to add one more level of complexity to it all, Avatus summons three virus cannons on the opposite side that launch giant red blocks that will not only knock your character flying back if hit directly, but will also initiate the decaying sequence on any platform they pass over. When the guy paid to drive the demo fails twice before getting across, you know it takes some fancy footwork. 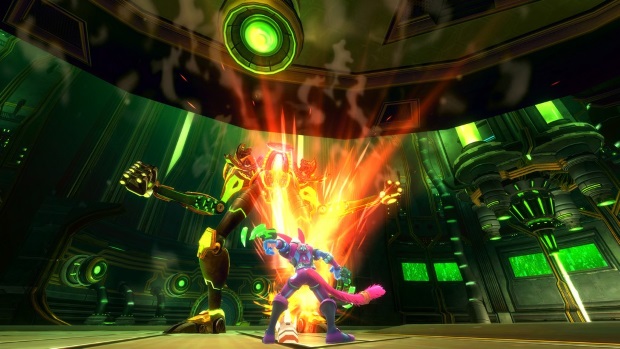 Various other rooms pit players against the Omnicore raid bosses in a weakened state (read: won’t one shot you). Head to head combat against these constructs leads to a never ending conflict, so instead of just smashing robot skulls, you will have to do it with finesse and critical thinking to unlock the way to the next room. Though if you have actually completed the raid, you’ll be at a huge advantage by already knowing the entire layout of the dungeon and what to expect from each boss in terms of attack patterns. 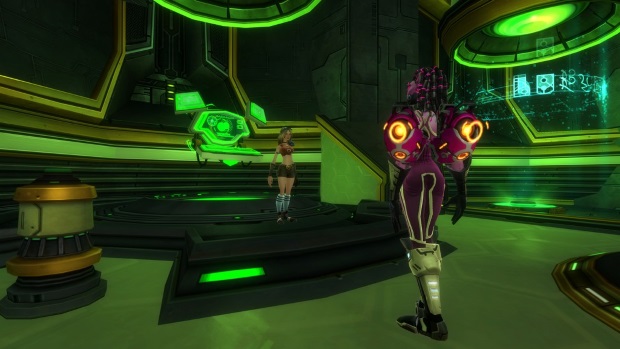 Some third wall breaking moments are scattered throughout the tour as you may interact directly with NPCs representing the roles of the raiders. Sometimes they will bring you tools from the actual raid such as the grappling hook to help you solve puzzles. There’s a level of replayability in this dungeon as well as many points in the map offer two routes, one promising more puzzle and platform heavy gameplay, while the other is a straight out brawl. The narrative is slightly different depending on your faction as well as Axis Faydra of the Dominion or Belle Walker of the Exiles guide you through. There’s something sexy about an Exile in daisy dukes getting all charged up on Eldan magic. 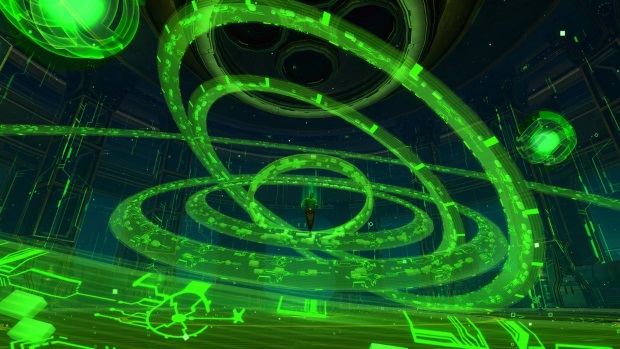 If you demonstrate the skills to make it to the end of this digital dive, you will be treated to a holographic vision of the various stages of the final raid battle with Avatus. As he falls, you are told to do the simplest of tasks. Hit his kill switch on the opposite side of an oversized CPU drive. Only a single four legged Eldan construct stands in the way, and the battle seems almost too easy… that is until Avatus recovers from the battle and recognizes the true threat you now pose. Next thing you know you’re fighting the possessed or corrupted or whatever you want to call it when a computer program uploads into a robotic construct that may or may not actually exist on the physical plane in what has to be the most intense 1 on 1 battle in WildStar yet. We’re talking spinning lasers covering the floor, carpet bombing telegraphs that are going to require teleports to fully dodge, ethereal giant pistols popping up in your blind spots to take popshots at you, and some seriously chaotic cinematic moments in which your Eldan charged guide forcefully takes control of some of these same traps that you will have to use against Avatus to weaken him. 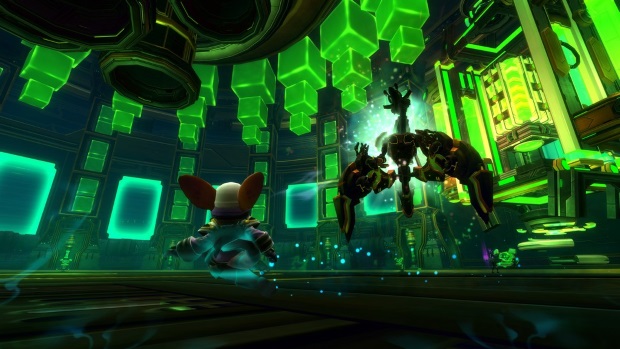 Thankfully Carbine cut the demo before the final cutscene so as to not ruin the resulting ending. But if you want to see this madness in action, we have a recording of the full demo rendering! Keep an eye on MMOHuts’ YouTube later this week for our accompanying video narrated by Stephan Frost.

Ed: the video is now available!