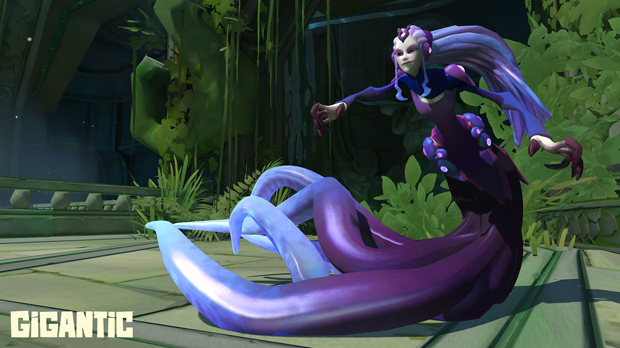 PAX Prime may have just started, and I still have two days left with meetings filled to the brim, but there’s a snowballs chance in hell that any new reveal is going to live up to the excitement and fun factor that is Gigantic.

What is Gigantic? Imagine playing a MOBA made by Pixar. Though calling it a MOBA is wrong. If you set up a scale of games with Team Fortress 2 on the far left and Dota 2 and League of Legends on the far right, and then put SMITE somewhere just to the right of center, Gigantic would be the SMITE’s mirror on the scale. While the characters are still quite richly placed in the fantasy realm with fireballs and magically healing flying around everywhere, the overall feel is distinctly that of a TPS on a MOBA map. Rather than purchasing items, a player gains ability upgrades from experience earned in combat.

So in the spirit of the TPS genre, your skill set is set up on your mouses left and right click as your primary two attacks. More complicated abilities can be found on the Q and E keys with F existing as a extremely rare ultimate ability that seems to unlock faster the better you’re performing, rather than being on a set cooldown timer. Characters live off their health bar, though their mana bar acts as a secondary stamina bar, limiting your ability to run or perform fast dodge skills. The game is all about being at the right place at the right time, and there’s plenty of tactics involved with balancing use of mana for speed versus ability use. 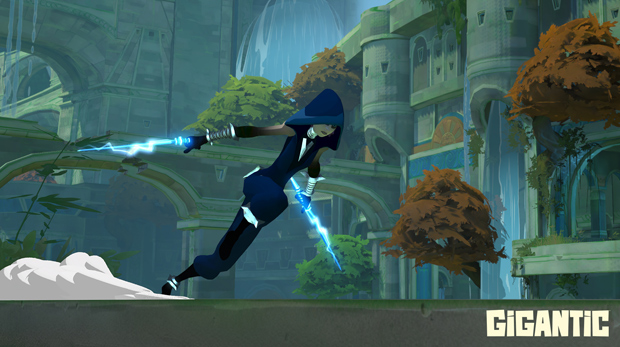 So how is the game played? Well it’s pretty dang complicated to fully understand everything going on around you.. at first. The map exists in roughly a C shape with a gigantic griffon boss at one team’s base and a nasty Naga at the other. As you travel through the C you will run into a lowland area with a fast moving river that cuts the center of the map in half. In an even battle (which thankfully the press in my group experienced), the majority of the fighting takes place around this river area in a push and pull struggle to keep your foes on their side of the map.

The goal of the game is to support your Gigantic boss through killing enemy players and capturing various points on the map in the typical Dominion/Domination style seen in other MOBAs. The twist on this is once these points are captured, any player on the team present can choose a guardian to hold the post down while you’re gone. One guardian was a tree that offered an AoE heal for allies in the area to support long siege defenses. Another was a tanky beast that rammed players and was just a general nuisance as its large hitbox tended to keep you from landing your attacks on enemy champions. Unfortunately I never had the chance to summon one of these creatures myself so I’m unsure of just how much variety there is but I can say at least three were present in our match and four confirmed via this picture they provided. 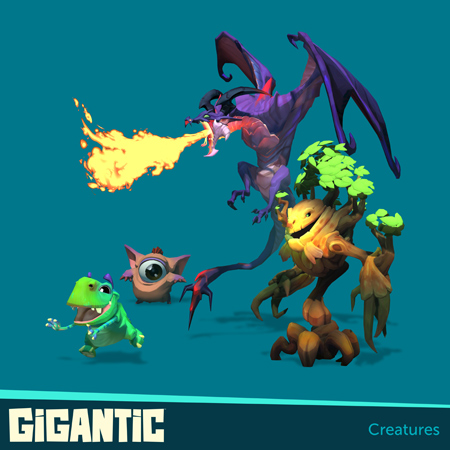 Now not only are there no items for purchase, but another odd twist on the genre comes in the form of there being no passive stat gain from leveling. If you want more mana pool, more movement speed, more hp, or attack damage, then you’re going to have to select level upgrades that grant you that. But then you will be losing out on bonus ability effects for your skills that arguably could be more useful in a given situation. All in all each character has three ability upgrades for each of their five skills and you can only gain ten levels total in a match. There’s certainly plenty of variation in build potential if you do the math on that, especially when considering that leveling is rather slow and your choice of early skills will have a major impact on your playstyle for quite a long duration of the match. 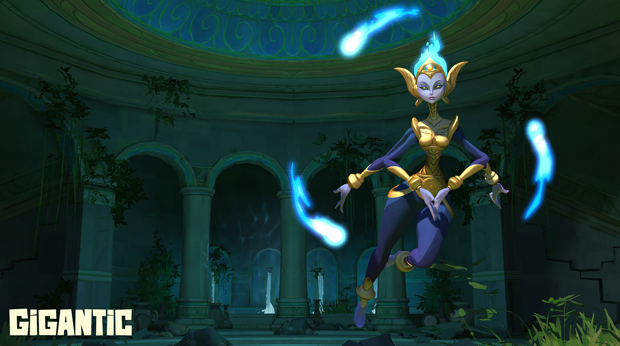 Now just when I started to think I had the hang of it and netted a few kills despite the low dps of the healer Vadasi, suddenly the enemy Gigantic was gone. My radar was flashing and our team was in a bewildered panic. What the heck was going on?

The Naga lept across the map and was in a face to face showdown with our Griffon and getting the better of him no less! We rushed back and foolishly focused all our attacks on the giant beast but to no avail. Our attacks were entirely useless against the monster, but to say we were powerless would be untrue. The summoned creatures we held in the area of our base granted their power to our Griffon, allowing it to at last unleash and terrible dive into the Naga and send it fleeing back to the opposing side of the battle. This process happened repeatedly, with the later events involving our Griffon going on the offensive. While it’s challenging to tell at a glance who is winning a fight, if your Gigantic is on the receiving end more often than not, it seems to be a bad sign. 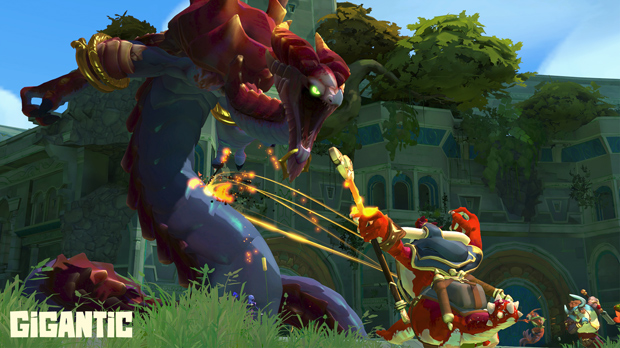 After a brutal 20 minutes of combat and learning twice that my squishy healer was getting my damage reflected back at me by the nearly invincible armored tank Margrave, the pattern of combat yet again flipped out on us. During an assault on their Naga, the Naga fell over and seemed to have suffered a fatal wound. At last we could harm it directly! Yet this wasn’t the end as our Griffon fled back to base, before both creatures suddenly burst through the wall of their bases and into a secondary arena on the inner part of the C shaped map! 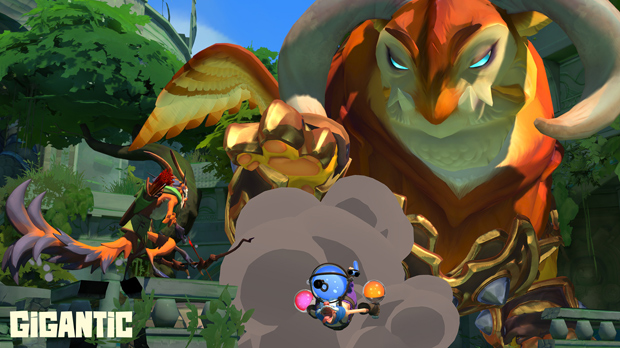 The combat instantly changed from a capture the point shoot out to a team deathmatch as each Gigantic tossed out tornados, acidic spit, and all kinds of abilities to tear the realm to shreds. Each of our kills now mattered more than ever as it directly damaged the power of our Gigantic in the fight! In the end the battle came down to two kills left a piece before something major was going to happen. We weren’t sure what as just about everything in this game came as a surprise, but both sides were playing it safe just in case.

Now not everyone was max level at the time, which added quite a bit of meaning to the earlier gameplay as if you get pounded on there, you will be at a severe disadvantage in this head to head brawl. However the map layout was quite interesting, with extremely high vantage points for ranged characters to camp from and deal support damage. The tiny arena is covered with tons of vision blocking brush and elevation changing ramps that help put melee characters on a much more even playing field than their ranged counterparts that tend to dominate the waterway battle early on. 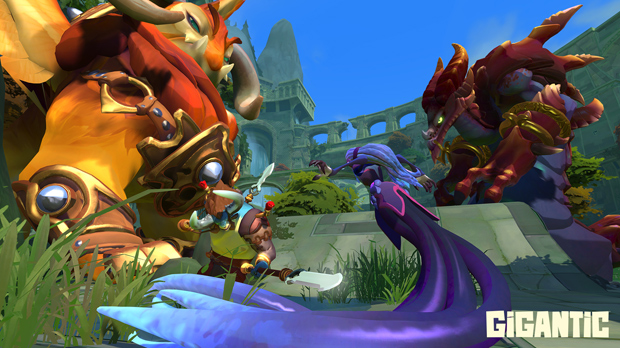 At last we broke the standoff with a full on bull rush into the enemy team. Focusing the enemy’s Vadasi down first, our drone HK-206 went into fully on turret mode and splattered the landscape with bullets. The second kill was secured shortly after, as the mighty Naga at last crashed into the ground. An open orange weakspot appeared on its backside, and our attacks at last were directly damaging the beast. But for how long? 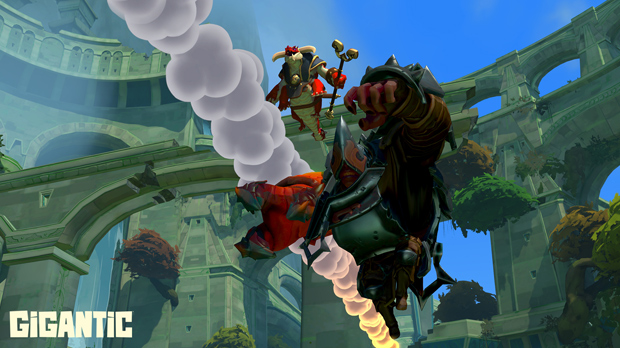 Our entire team went all out on the core as the enemy team’s assassin Tripp, tank Margrave, and Voden the trickster archer shredded my team into Swiss cheese. It was clear my heals were nothing against their incredible late game damage so I turned to focus my upgraded AoE fireballs on the Naga core as our third ally fell to the onslaught. The screen flashed just as my HP hit zero, and the Naga met its end. 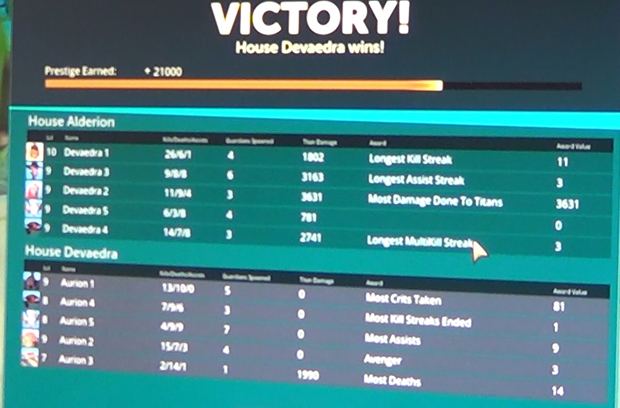 Post match offers all the juicy statistics esports shoutcasters fantasy about at night. There’s even a nifty set of awards at the end as well that’s likely a work in progress. I felt disheartened that I was the only member of the team to not earn one, but then changed my tune when noticing that some of these awards were better to not get at all, such as the “Most Deaths” award. Ouch. 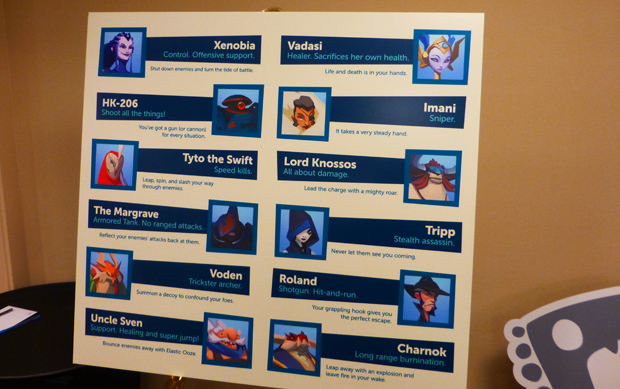 The game currently has 12 heroes available in alpha testing and a total of 20 in production behind the scenes at the office. And already the balance feels spot on and combat crisp. It’s hard to combine the Y-Axis in a MOBA setting, yet Gigantic is setting the new standards for it all the while adding levels of scale unheard of in the genre before. If this is alpha, you can bet I’ll be sinking plenty of time into this game over the next few months, and highly urge anyone attending PAX to swing by their booth and test it out, as the game is available on the showroom floor to the public!