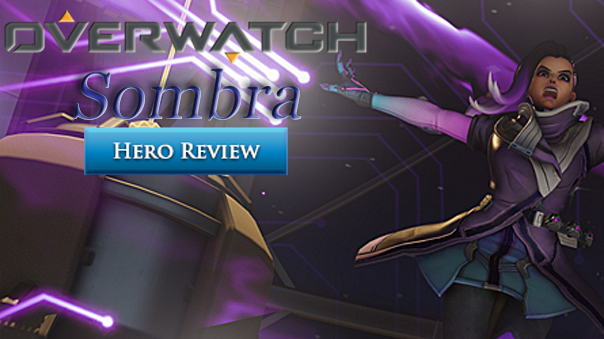 The name Sombra has been thrown around a lot lately as Blizzard continuously teased their latest addition to the Overwatch roster. From hints found in the game to jokes told by the community, there was a lot of hype behind this mysterious hacker. The latest update to Overwatch finally allows us to get our hands on Sombra along with some other neat changes. Read on to learn more about Overwatch’s latest content update!

One of the world’s most notorious hackers returns from the shadows. Sombra is a mysterious infiltrator who uses information to control those in power. She uses her abilities to hack enemies, disable health packs and turrets, and slip out of site using her Thermoptic Camo. This slippery offensive hero does a great job at disrupting the enemy team’s flow and deals great damage up close. After some initial testing, I found Sombra to be a more difficult hero to pick up and play compared to other heroes due to her unique playstyle. The closest comparison I can make is to Genji where you must always be on your toes and never get caught out of position.

Sombra has some nice highlight intros

Sombra’s primary damage comes from her Machine Pistol. This fully automatic pistol fires multiple weak shots at a rate of 20 rounds per second. From afar the accuracy is not very good due to its spread, but if you are able to get right in the enemy’s face, it can dish out a ton of damage. Due to Sombra’s small health pool, staying close to enemies can be deadly. This is where the Thermoptic Camo and Translocator come in.

Thermoptic Camo causes Sombra to become invisible to enemies after a short delay. While invisible, she gains additional movement speed but any damage dealt or taken will reveal you to enemies. A Translocator can be thrown out allowing Sombra to instantly return to this beacon – even when it is midflight! Trying to use your invisibility during combat can be tricky but if you combine it with your Translocator, it can be possible to return to your beacon while invisible. Simply throw out your Translocator, start using Thermoptic Camo, activate your beacon, and return to your beacon in an invisible state. It’s as easy as that! It’s important to keep track of your Translocator timer as it will disappear even if you never use it.

Once you have got the hang of using your mobility abilities to get in and out of battle, it’s time to start hacking your opponents! Hack causes your opponents to lose their abilities for a short period of time but can also be used to render first aid kits and turrets useless. Ever get annoyed with Genjis reflecting your shots? Reinhardt annoying you with his shield? Make it impossible for them to do so by hacking them! This ability can cause major disruption during battles as enemies scramble to rethink their strategies with no abilities available.

If that is not enough annoyance for your enemies, Sombra’s ultimate, EMP discharges electromagnetic energy in a wide radius, destroying enemy barriers and shields while also hacking all enemies caught in the blast! Hack was already very good at disrupting the enemy team by flustering one player, but now you can do the same to an entire team with your EMP! This ability works great if used alongside other ultimate abilities. For example, DVA may have a hard time landing her ultimate with Reinhardt’s shield. By timing your EMP with a friendly DVA, enemies can be caught off guard and destroyed as their precious shield unexpectedly disappears.

No barriers for you, Zarya!

All in all, Sombra is a fun hero to play and can be quite strong on her own. She excels when played alongside a coordinated team who can make the most of her disruptive abilities. I still have a long way to go before feeling comfortable with her skillset, but I can see her having a lot of potential in the competitive scene. Just by possessing the ability to disrupt enemy plans, she can contribute a lot towards a successful offense or defense.

Aside from the addition of Sombra and other balance changes, Blizzard added a brand-new arcade. The arcade allows you to wind down with some more casual and relaxing game modes such as 1 versus 1 duels, 3 versus 3 skirmishes, and an alternating selection of brawls. These game modes do not fit into Overwatch’s normal playstyle as a team oriented objective based shooter but can be fun from time to time. It always feels weird approaching Overwatch’s skirmishes as elimination style game modes where the last standing team comes out victorious. However, the one-on-one duels can be quite fun.

1v1 duels are a great way to warm up

These duels pit you against another player where both players play the same randomized hero. From there, it comes down to individual skill and mind games to come out victorious. Often players taking damage first are put at a disadvantage but clever maneuvering (and good aim) can lead to impressive comebacks. I can see myself stepping into this game mode from time to time to relax or as a warm up. When I used to play Counter-Strike, we would always jump into some death matches beforehand to warm up our hands and reflexes. The arcade may be able to serve the same purpose before players jump into competitive play. Besides, you can win a lot of loot boxes through the arcade, so why not?

The latest additions to Overwatch are great. Sombra is an interesting hero with unique abilities able to disrupt the flow of the game. I would not be surprised to see her surfacing into the competitive scene with her ability to foil well thought out plans. I personally will not be playing her much as her playstyle does not align with mine, but she should remain a popular choice amongst other Overwatch players.

Tip: If you want to try out Sombra and are having difficulty picking her, try out the No Limits game mode in the arcade. This game mode allows teams to pick any hero regardless of if it is already picked by someone else.

Just having Sombra in this patch would have been amazing but the arcade helps to add additional replay value to Overwatch. Simply grinding out competitive games can begin to feel like a chore over time. The arcade gives players the chance to wind back and relax without worrying about their plummeting (or soaring) matchmaking rating.

Blizzard never fails to deliver with their patches. Let us see how these changes play out over time. I’m excited to see what else is in store for fans of Overwatch!