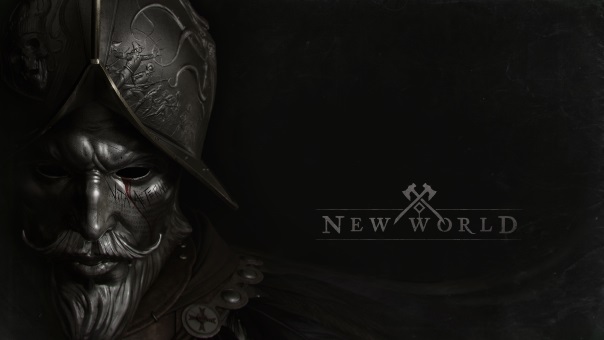 Sandbox MMOs are difficult for me to get into, as a lot of them are PVP heavy with no consequences for demolishing newcomers. It’s a hard gate to cross, but I think New World really hit the nail on the head with how they’re approaching this world they’re constructing. This week I went back to the Bay Area to check out Amazon Game Studio’s upcoming Sandbox MMO, New World. New World is a very ambitious project and one that I am far more excited for than I was initially. My big fear was that it was going to be more like Rust, where groups of jerks roamed the world and just killed and looted people indiscriminately. I’m very grateful that does not seem to be the case at all. I also have an interview I did with the developers behind New World, which can be found in the link below, which also features gameplay.

It “is” still a guild-vs-guild style game where companies of players can declare war on each other, and lay siege to their territory, but thankfully it’s less in the DAoC style, where you must always be logged on and wary. It’s a gorgeous world, and the transitions between biomes are something else I enjoy about it. It’s a game that normally might not be on my radar, but their approach to creating this world has my attention. I don’t have to stress quite as much about being murdered and looted (unless I’m a criminal), and I can just enjoy the game.

During our time with the game we had access to high-level characters with incredible gear, so we got to explore the game without much in the way of restriction. I would also like to experience it from the beginning, but I imagine I will have Alpha access soon enough, so I can get my feel for the game starting from scratch. One of the things I like about this game is that I can play it from a neutral/third-party perspective if I want. There are no real in-game factions. Instead, players form companies, or simply go at it alone, if that’s their desire, and explore this new-found land, carving out a piece of it for themselves. 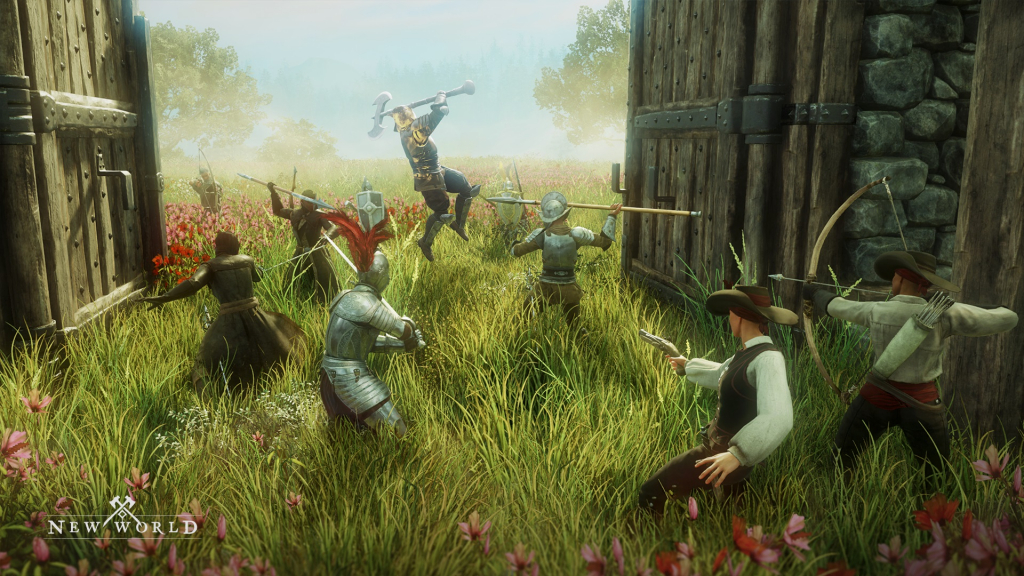 We used explosives, then good old fashioned manual violence to break into an enemy fortress.

Servers look to hold about 500 players right now, and the world is big enough for many factions to start forming up. You start with nothing, and grow without restrictions of class, growing in a way that suits your own designs. Personally, I prefer class-based, but I do feel like this open world needs a classless system instead. On the note of “classes”, my favorite part is that you can still be a healer! There is a gauntlet-style weapon that you can craft and equip, that acts as a healing weapon. It creates a field on the ground that heals, that can also be aimed at other players. Anyone can build it, too! There are hundreds of items to craft, and there’s really no wrong way to approach it. You can craft and design your fortifications and armor in a way that makes you happy.

Just because you focus on heavy armor, swords and shields doesn’t mean you can’t craft this too and put it on your bar as something to swap to. So let’s discuss this system, as it stands right now. We had access to several weapon types, all of which can be crafted. In fact, everything you need is crafted, though you can also purchase/trade with other players, in case you don’t have the ability to make something specific that you want. There are tiers of gear quality, with their own requisite component types. I don’t have any real details on how you improve in crafting other than simply doing it and finding better components to use.

The game is still in Alpha though, so once I have my hands on it, I can talk about that in greater detail. I tried out one-handed swords, spears, mace, healing gauntlet, and their musket/arquebus. The most exciting one for me was the gun weapon. Since this world has a supernatural feel, they weren’t bound to the current-era guns that took forever to load, shoot once, and take forever again to re-load. These guns use cartridges, and they do have a small reload time, it’s certainly viable. They’re very satisfying to shoot and blast an unsuspecting player/enemy in the face with, before swapping out to a melee weapon when they get too close. 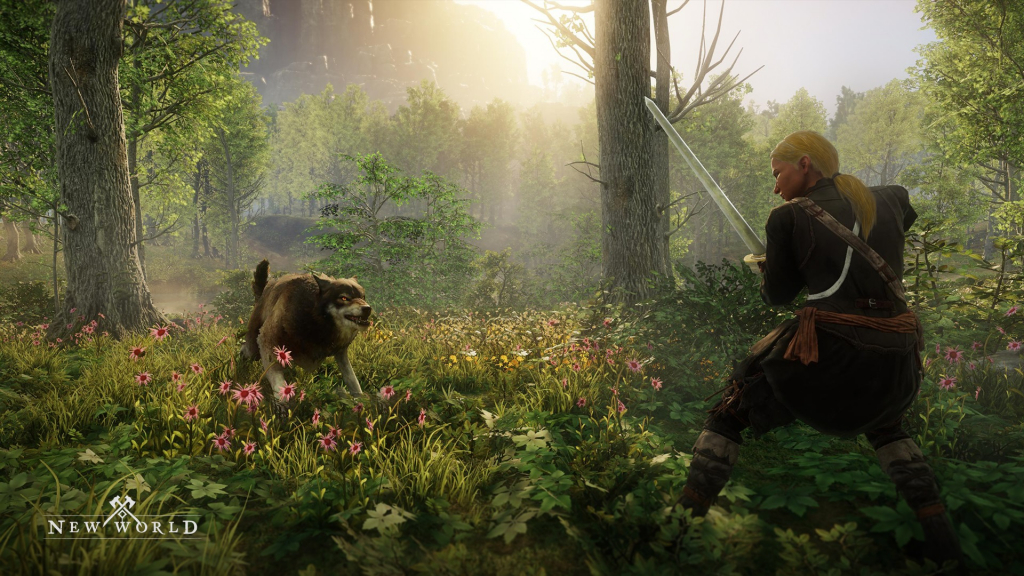 Whether it was fighting wolves, people, or spirits, it was always intense.

Each weapon style also has a pair of special attacks attached to it. For example, the sword has a low-striking sweep and a powerful forward lunge. Combat feels fluid, but not terribly fast-paced. That’s fine though, but I don’t think battles will last terribly long in single pvp encounters. You have your two special attacks, consumables you can equip (food, water, barrels of dynamite), and up to three weapons to swap around. You can block with a shield, and spacebar also is a useful dodge-roll. I tend to use it after knocking someone back with a sword strike because the sword seems to have a pretty solid hit-stun chain when the opponent has no shield. Shields right now are incredibly strong and hard to deal with. They are so good and I have a feeling they’ll probably be adjusted in some manner.

The 1v1 battles/duels were okay, but the group battles were where the fun was. We snuck up on an opposing company after declaring war on them, stacking tons of explosives on their wall. Demolishing their wall so we could run in, and also blow up the structure in the center of their base (that’s how you win these siege battles). Players can respawn, and companies can have respawn points away from their base, and can even build defensive structures around them. The attacking players can set their camp group nearby and respawn from that, but you can’t respawn infinitely in these situations. The way I believe this system works is you spend gold to declare war on another company and have a window in which to conquer them. You don’t have to worry quite so much about being defeated while you’re at work.

The actual gameplay felt very good, and I like that you don’t have to be vigilant every single moment you’re online. Of course, since this is a sandbox game, there’s not going to be the expected “end-game dungeons/raids”, because the goal is to work on conquering this land and making a lasting impression on the world. Players shape and control this world, from controlling the resources, farming the land, and doling out justice. There’s no real “justice system” per se’, but being a criminal is dangerous in this world. You can turn on the criminality flag by pressing U on your keyboard, and your name will turn red. When this is on, you can kill players as you see fit. It’s easy to see who is a criminal, but while this may appeal to players who just want to be jerks in MMOs, but be aware – it comes with a cost. While there are safe areas, titled Sanctuaries, criminals are not safe there. 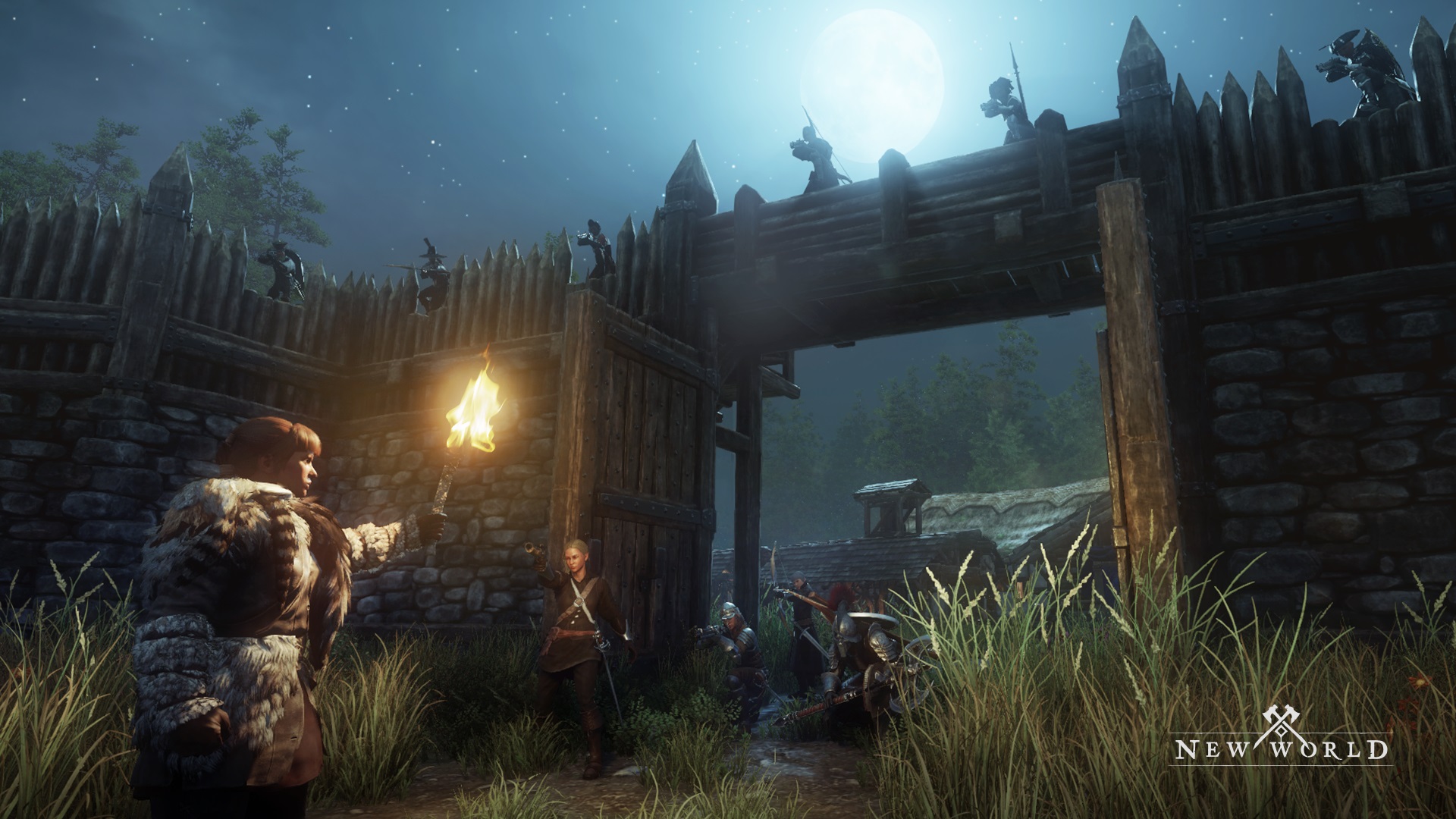 New World is a living, breathing world I'm excited to get more of.

Players that are not criminals can attack them and defeat them without being attacked back. It seems that the community definitely bands together to combat criminals, and said criminals wear their crimes as a badge of honor. I won’t lie, I like the idea of criminals dropping all their gear when they die though, showing once and for all that crime truly does not pay. Ultimately, New World is, as I said, a very ambitious project, but I think it just might be the first sandbox MMO I play that I honestly enjoy. So far I do! You can approach the game however you’d like, there’s plenty of land to explore, and I rather like the idea of being able to play a neutral master/master merchant. I could recruit players to farm, resource gather and craft the best gear, and also be mercenaries to join in on battles. It’s still very early in New World’s life, but I’m sincerely intrigued by what they have on offer so far. Crafting feels like it won’t be an insane chore, and as a core part of the gameplay, that’s a good thing. Look forward to us having Alpha access soon and putting more impressions of the MMO as it grows. I’m often very leery of sandbox games, but so far, New World feels like it will be welcoming to new players who want to explore this land, and have a nice variety of ways to play.