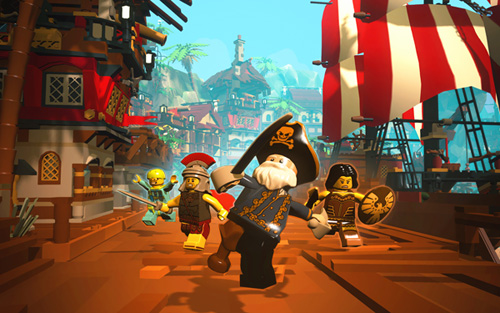 LEGO® Minifigures Online is currently being developed by Funcom, and leading up to Open Beta this summer, more details about the game will be revealed.

Last week, Funcom attended the Game Developer Conference in San Francisco, offering press their first hands-on opportunity with the game. The embargo for this event was lifted yesterday, and since then, coverage has been popping up on sites such as IGN, GameInformer, Destructoid, PC World, MMORPG.com and many others. The content press got to play at GDC was set in one of the many worlds players get to explore in LEGO Minifigures Online: the Pirate World.

So, let’s go back to pirate mode:

Ye think yer a proper pirate, aye? Well, then! Head over to Volcano Island and battle the terrible ghost pirate Dreadleg, or mark yer maps for Treasure Island and best the most terrifying o’ sea monsters: Crikey the Kraken! This be what separates the scallywags from the swashbucklers and the bilge rats from the buccaneers!

Or, ye can just watch this ‘ere moving picture: