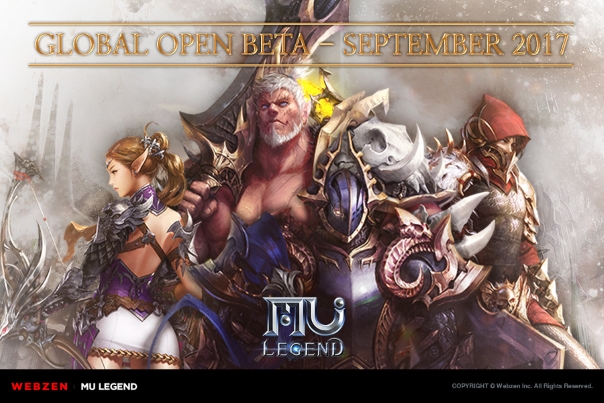 WEBZEN, a global developer and publisher of free-to-play games, has announced its upcoming action MMORPG MU Legend will enter its open beta phase this September.

The open beta comes with a whole new set of features, further enhancing the previous CBT versions of the game. As with the second closed beta, players will be happy to hear that the MU Legend OBT will be available in any of the following languages: English, French, German, Polish, Spanish and Brazilian Portuguese. Over the entire three weeks of CBT sessions, MU Legend has hosted hundreds of thousands of beta testers.

In the intervening months, the MU Legend team continues to focus on a polished translation for all 6 languages on offer. This OBT version will also feature some deep, new content which will be explored in crispy detail in several dedicated spotlights (to be published on MU Legend’s official Facebook page)! MU Legend’s developers are enthusiastic gamers, and providing the very best OBT experience to players is their top priority: their constant, unyielding development work is forged by their natural love for games and their professional involvement.

As the official successor to MU Online, MU Legend features fluid and stunning hack ‘n’ slash combat mechanics that are sure to please fans. The game will also cater to both solo and party play, through a deep story in a rich and vibrant world. Players will get to choose from four distinct classes, which are the Dark Lord, Whisperer, Blader and War Mage. Each class will feature unique skill sets and mechanics that will cater to any playstyle.

MU Legend’s gameplay experience provides for a deeper immersion in the core game mechanics, delivering exciting PvE and thrilling PvP! Furthermore, with the open world questing, not only is there a main story to follow, but players can progress in a non-linear fashion. There will be plenty of side quests to complete across the continent of MU.

The September MU Legend OBT launch for the global audience has been decided with two fundamental aspects in mind: entertainment and quality. As a team of gamers ourselves, and taking into account the feedback from our Korean version of MU Legend, we have decided to tickle the very end of the summer for a global release, which will contain many more features than previously thought. The MU Legend team is now putting in a lot of hard work to provide the best game delivery possible. I’m very proud of the commitment they have shown, involving several departments and hundreds of passionate people utilizing their technical and gaming skills.

We will keep everyone updated regularly as we continue to deploy improvements.

As MU Legend fans’ eagerness to explore the mysterious continent of MU has been building, rumors in the Dublin office have spread that players’ core gaming skills would soon be put to use. Indeed, a server stress test will occur during the summer, and interested players will have the chance to help developers test the servers in real conditions in order to iron out any remaining potential weaknesses. Communication about this special event will be shared in the coming weeks.