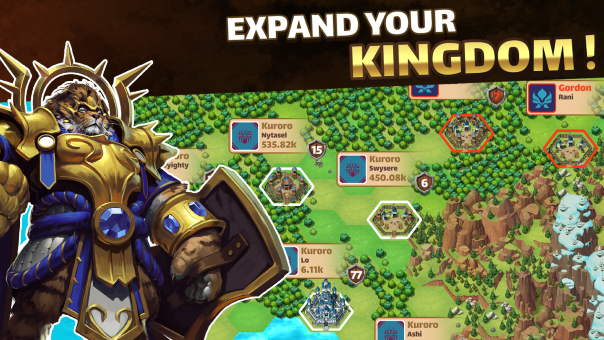 Million Victories is an up and coming strategy-focused mobile game studio, and they announced today they have acquired over 1.4M in funding as they work towards their first game, Million Lords. Million Lords is a mobile game that is going to be focused on true, deep strategic experiences that seem to have been forgotten by other games that are in favor of pay-to-win, paired with heavy resource management. Instead, Million Lords is going to focus on creating a game focused 100% on strategy and also have a fair PVP experience for all players.

Million Lords rely on a proprietary server-side technology developed by Million Victories which enables an unlimited number of users to play online at the same time under one server. Based on Million Lords early key metrics, players are already spending over 1 hour per day and generating a revenue per daily active user (ARPDAU) over $0.50** which shows that the game focus on delivering a true strategic experience is paying off with gamers. With this in mind, I recently sat down and chatted with their CEO, Benoit Ducrest about this upcoming title.

1. I’d like to broach the most important topic first – monetization. One of the things I saw in the announcement was that Million Victories wants to stray away from the very popular trope of pay-to-win in mobile. What inspired this decision, and what are your plans for monetization?

First, we saw that several great free to play games have good monetization without being pay to win, like Fortnite, Hearthstone, or League of Legends.

Passion for true strategic gameplay which we found playing classic board games such as chess, the Settlers of Catan or PC games like Civilization which requires an even playing field at the start to let each player truly use their strategic skills to win the game. A one-sided start does not make it a compelling experience for true strategists.
Refusal to discriminate on the basis of wealth like many 4X games or strategy MMOs on mobile (Game of War, Final Fantasy XV or Game of Thrones to name a few), we do believe a key element of fun in our game system is about making it fun both for non-payers and payers. 4X game design, focused almost exclusively on resource management, tending to just use non-paying players to let them be beaten up repeatedly by payers.

To date, Million Lords offers both solid user retention and over 1 hour per day per user of average playtime in the key markets which is promising for a game aiming to deliver more strategic balance. We think that players share our philosophy that users should pay to gain more comfort or to feel unique, but not to win.

2. Another goal is to deliver a sound strategic experience, without forcing players to spend real money. What sort of mechanics are used to foster this environment?

The team has put a lot of effort in order to focus the core loops of Million Lords around the strategic experience: balancing the troops you might expand winning a specific city and the potential gains of the said conquest which is the heart of strategic planning offensively speaking. And, of course, we have a similar loop in terms of defense: will you be able to defend by leveling up your city or should you abandon it with the remaining troops and retreat strategically?

But beyond the player’s individual actions, there is also the PvP element at the core of the game: beyond your own decision against a player, other players might disrupt your carefully planned offensive (or defense) by trying to intervene.

In addition, if you add the social element as a meta-game to those core loops with the clans coordinating their offensive goals (clans are still a work in progress feature for us so we lean heavily on Discord for now), you produce another layer of complexity and strategy.

3. What games is your team drawing inspiration from (and in particular, what parts of those games)?

As I have already mentioned, Civilization from Sid Meier was a great inspiration in two ways: having everyone starts on equal footing (1 city and 1 “settler” for Civ, 1 city and some troops for Million Lords) and the concept of cities as key nodes for your power. Then, another inspiring series on PC was Heroes of Might & Magic and in particular, HoMM3 which crafted a truly strategic experience with a balance that was not tipping over as much towards resources management and following a build order compared to real-time games like Age of Empires or Starcraft.

Finally, we played a lot of the web-based MMOs like Travian, Ogame or Tribal Wars. While we love them, they were too hardcore and punitive for most players to stay engaged. Million Lords truly comes from our love for the PC games combined with what we felt was a lack of mobile games truly focusing on PvP strategy.

4. Million Victories uses a system where all players are concentrated on the same server without slowdown or lag. Can you go into the technology that allows for this?

We are trying to keep the specifics on our technology a trade secret but, at the core, our engineers took their inspiration from the design of the stock/equity trading tech requiring at very large scale, high security and low response time to check the status of millions of operations. The only reason our servers are still divided in 3 continents (Americas, Europe, and Asia) is the need for the players to be playing in the same 12-18 hours since it’s a real-time PvP game.

5. As Million Lords is still in the beta phase, what sorts of lessons has your team learned from the development/feedback process?

We involved players from the start. And, at each step, we were surprised to see how much Million Lords was resonating with them. During our first meeting with strategy game players, we presented them with the concept and core mechanics without showing any image or slide. But they still reacted with passion and wanted badly to play the game just based on our conversation. Throughout the first playtest, featuring a build with only the core mechanics and a lot of bugs, players couldn’t stop playing and the pizzas got cold! When they left the studio around midnight after playing for more than 8 hours, they continued to play for days to give us their feedback. At each consecutive playtests, the same scenario has repeated itself. It has helped us feel confident that we have been heading in the right direction.

The first lesson that we have learned is to trust the community to speak up: we are so glad that many among our 100,000 beta testers have provided us with so many feature suggestions, bug reports, trusting that we would fix the most important issues and make the game better…which we did. A good example is the season system which was designed based on players’ feedback.

Additionally, we have also learned the benefits of not rushing through production since the game is doing well enough: instead of promoting aggressively our product through marketing, we have been lucky enough to benefit from the support of Google and Apple as well as regular videos from our fans (thanks Zuka In-Game and Dr3am Gaming!). This support is a blessing and has helped make our studio self sustained.