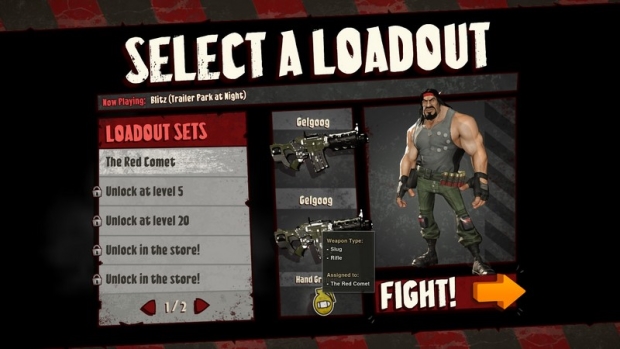 Gore Fortress 2: The Fortressing
I had no idea what was waiting for me when I was handed Loadout, no clue what was waiting for me beyond the title. What I found was a humorous, interesting title. Many people on Steam have played Team Fortress 2. Not everyone liked it, and the “Hat” collecting could be seen as stupid, or absurd. Loadout’s absurd in quite another way. It’s like the drunken older brother of Team Fortress 2, in that it’s violent, filled with blood and exploding bodies, nudity, piles and piles of guns, and interesting game types. Weaponcrafting was the biggest thing to me. Being able to avoid simply using an AK-47, or whatever trite gun Call of Duty shooters offer was a treat. The only major problem I had was the wait to get into a match on the first day or so I attempted to play this interesting title. The first night or two, I could not even get into a match. Over an hour’s waiting left me irritable and horrifyingly bored. On the third day, however, it became easier, and I had a blast. I do not know if it was an error on their part, or simply not enough people logging in, but I got a chance to view this wonderfully fun, free-to-play title.

In Loadout, you play as one of three equally awful-looking characters in a series of manic, fast-paced team-based events, blowing up body parts, spilling blood, and causing chaos and violence everywhere you go. This cannot be more adequately explained by the way matches begin. All matches start with a huddle of players from both teams. They’re all standing right in around each other; a person fast on the draw with a grenade or wide spraying gun can make quite the killing right before the match, and give their teammates an advantage. Yes, even the ones they blow into chunks.

It’s Kind of Like Hooters… Kind of.
Only there’s no real class to be had – just tackiness. But it’s still entertaining in its own right. The charm of Loadout is in the customization of weapons. You do absolutely crazy things for any occasion. As you level up (exp is gained in matches), you can get more slots for customized guns, which you name, and apply the desired types of parts. New parts cost “blutes” which are also won in matches, but you can purchase an xp/blute boost from the real-money store. That is the closest the store comes to giving a player an edge. The devs assure us that it will never be pay-to-win, but they have to make money somehow. That comes in the form of boosts, and interesting costume changes. Not like League of Legends, which sells skins, but more like Rock Band. The avatars from the characters are very reminiscent of Rock Band and Guitar Hero, and you can buy different pants, shirts, hats, et cetera. You can even purchase nudity, if such is your desire. You can make custom loadouts, with different guns for different occasions, much like in Call of Duty. 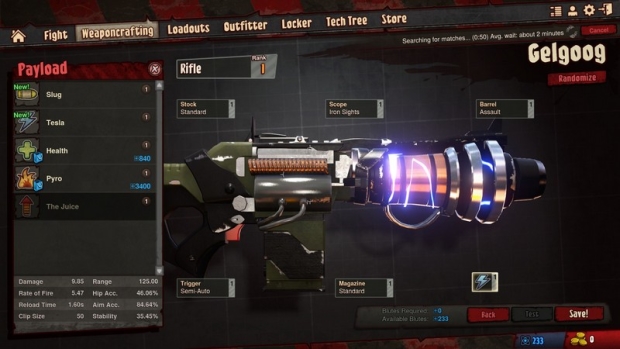 It may take a bit longer to farm parts and levels without that, but it is far from necessary. Once you have you saved a gun to your liking, you can try it in the test chambers, before you save it and spend your money. This is incredibly helpful, because you might decide it is not quite the way you want it. Now, I’m no ace at shooters. I’m mediocre at best. But, the wackiness of the game is really appealing. The idea of having bouncing chain-lightning bullets fills a hole in my soul that I, until this point, did not know even existed. I saw lots of various guns, even this early into the game. Wide spread chain guns, tesla rifles, rockets that explode into lightning or fire, and healing lasers. There’s even options for support-style players, such as being able to use guns that buff your friends and debuff enemies. There’s easily something craftable for everyone on the spectrum.

Bulletstorm Meets World
In most other shooters, you have a variety of cover to duck behind, to peer around walls and shoot at your opponents. That does not quite happen in Loadout! Instead, you have a roll, which you can chain into a super high jump to get on top of rocky outcroppings. The landscapes aren’t all “Brown City,” “Gray City,” or “Green City” like in Call of Duty or Battlefield. I have seen my share of post-apocalyptic, beat up cityscapes, and while they are sort of cartoony, the backdrops are very nice. They fit the setting, and are certainly different from your average grimdark shooter. There’s lots of action gameplay elements: running and jumping up hills, leaping gallantly across pits (where you can and will die if you fall), and then attempting to make a super sick rolling jump, only to helplessly tumble to your death (which I did several times.) There are ranked matches, and there are casuals; you can also test your mettle against bots, if that is more to your speed. I have yet to try out ranked, as I’m still kind of a low level, but I expect to be back for more! 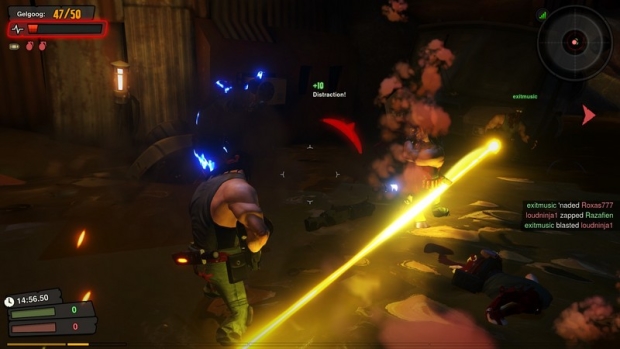 There are several match types in Loadout, which are random when you select a casual matchmaking game. I have experienced all of the match types so far, and I have to say, they are interesting, each and every one of them. In the match making hall, like most other shooters, the group picks the map that they play on, and each map has its advantages and disadvantages. There are four match types, which I will give a brief explanation on:

Blitz: The purpose of this map is to capture a control point and hold it for points. Only one is active at a time, and as an end result, there is massive bloody violence to secure and hold it. Working as a team is very important, as you try to hold the choke point, no doubt your enemies will constantly barrage you with grenades and bullets to steal it.

Death Snatch: Stealing “Blutonium Vials” off of dead bodies is key to success in this match type. It is very similar to “Kill Confirmed” in Call of Duty, in that you acquire off the desiccated bodies of your enemies. Now, you can get your side’s vials off their bodies before the enemy can to deny them points. The first to the ascribed total wins!

Extraction: Each side has a “Collector”. That person has to collect the Blutonium on the map, and take it to the grinder, to grind it down for their uses. There’s an indicator that shows when you are the chosen one. If you aren’t the collector, defend yours, or blow the enemies up as fast as possible. You need to keep your collector alive.

Jackhammer: This was one of my favorite modes. In Jackhammer, your goal is to steal a humongous hammer (more of a sledge) from your opponent’s base, and run it back to your own. Running, jumping and rolling with that massive weapon is pretty hilarious. You can also use it to mash your opponents into a greasy mess on the landscape. First to the correct amount of turn-ins wins this one. 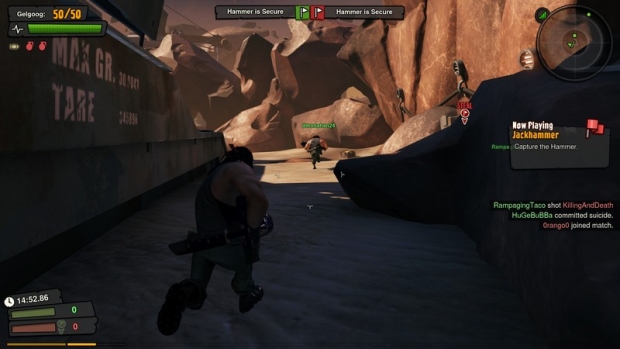 Graphics: 4/5
I rate these graphics high not so much for the graphics themselves, but the vast different from the other shooters on the market. The cartoony style really stands out in a sea of “realism.” The name of the game seems to be “outrageous,” and from the buckets of blood, the wackiness, and general carnage, I think these graphics deliver on any number of levels.

Controls: 3/5
The controls aren’t quite what I hoped, but you really cannot reinvent the wheel, so to speak. It’s mostly controller compatible, with a few keyboard exceptions. The controls are pretty solid. A little getting used to, with the placement of the roll, but a few matches and you’ll be high jumping with the best of them.

Features/Gameplay: 5/5
While there are only a few gameplay modes, this game stands out with its customization. Granted, while the character customization is very light unless you spend real money, it’s all in the guns. I feel like I’m playing a blend of Bulletstorm, Borderlands, and Team Fortress, in one delightful, zany package. There are crazy options, and I can see some pretty game-breaking potential here. But, in a world where everything is powerful, nothing is.

Music/Sound: 3/5
The music can get a bit monotonous after a while, but that’s all shooters as far as I’m concerned. The sound effects are pretty entertaining, though. Explosions, cursing, the sounds of blood squelching out of bodies, and watching a large white man do the “Carlton”, complete with the background music of “It’s not unusual” really made my gameplay worthwhile. I personally turn the game music down, and crank up “Demons and Wizards” or “Blind Guardian.” Sometimes “Sabaton.” Something suitable to get my blood pumping.